Thunderbolt-(Compatible) and Threadripper 3000 - Setting it up

Thunderbolt (Compatible) on my AMD Ryzen or Threadripper sysem!?

Yes, it’s true. You might have read the many, many posts on the internet of folks struggling with this setup. It’s more of an “own goal” from Intel than an AMD problem and I’ll explain why. (Be sure to check out our past videos on TB on AMDs platforms, and our recent Designare TRX40 review).

We must be careful not to infer or imply this is true sanctioned- or certified-by-intel Thunderbolt; it isn’t. It’s “Thunderbolt Compatible” PCIe over USBc. This distinction is incredibly important – hardware manufacturers have been keen to adopt the OPEN standard that underlies Intel’s implementation of Thunderbolt, HOWEVER certifications of this OPEN standard have been slow coming… at least from my consumer perspective.

This is why we take matters into our own hands and fix it ourselves.

We were the first group to cover hacking Intel’s Thunderbolt onto AMD’s platform all the way back on first-gen Threadripper. With modern TB controllers, very little has to be done. There is one key thing to understand, however:

DO NOT INSTALL THE THUNDERBOLT DCH DRIVERS

DCH is the new “driver model” Microsoft is moving to. It is more modern. There are DCH drivers available for Intel Thunderbolt controllers, but you don’t want them. They appear to have had quality control on only 2-3 models of laptop and literally no other devices.

Do not install the Thunderbolt Control Center from the Microsoft Store. 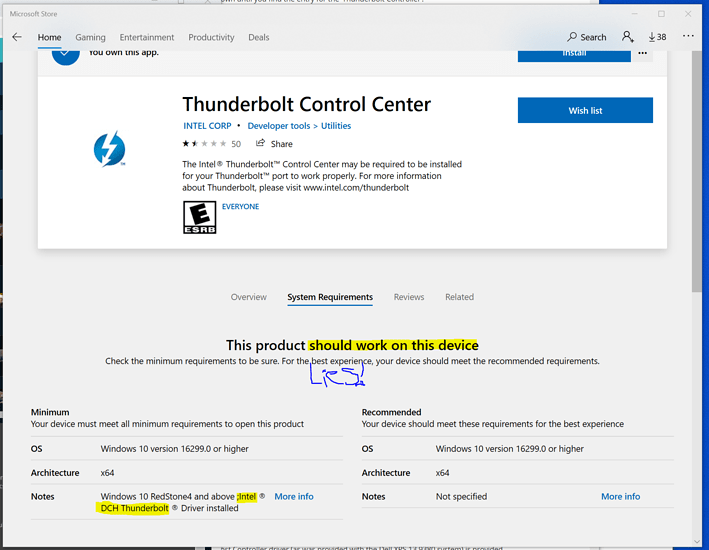 How to recover if you accidentally installed the DCH driver

I haven’t had perfect luck here. From an administrative command prompt, sc delete nhi then do

and finally reboot (which is critical) will almost always let me install the non-DCH drivers for thunderbolt.

P.s. These dch drivers are SUPER messed up, even on pure Intel platforms, for the half dozen or so Dell and HP lapops of the last 18 months I was able to get my hands on. So “Legacy” right now is my recommendation on any platform…

Setting Up the Designare TRX40 and Windows 10 for Thunderbolt-Compatibility

There are thunderbolt options in UEFI. TODO add the screenshos from the video here.

Pics of the LEGACY driver operating correctly with ExtGPU. Note this is what your device manager should look like. You should have a TB utility in the tray. 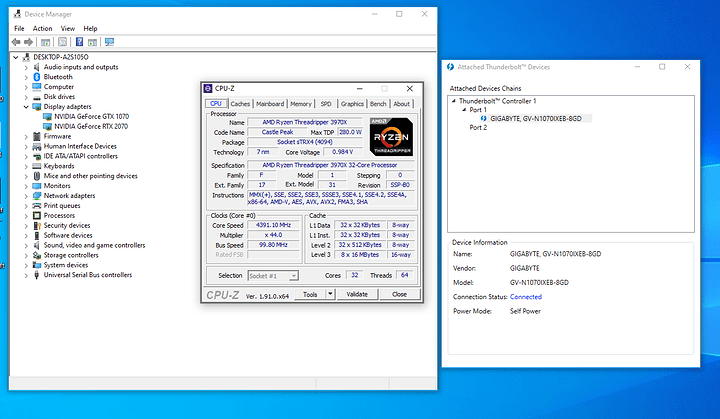 This Thunderbolt Driver from Intel is compatible with our hardware (it seems) and is generally the most consistent driver I’ve found for Windows 1903 (so far, January 2020)

I was able to hotplug, switch ports, and even do audio capture through the USB controller in the GPU dock with the FocusRite i2i (a miserable, terrible device that is extremely temperamental… but otherwise has great audio circuit guts. If there is the slightest problem with your USB, you can hear it.

Here’s the state of DPC latency. Not the best, but fine for real-time audio applications in a fairly well-configured Threadripper 3960X 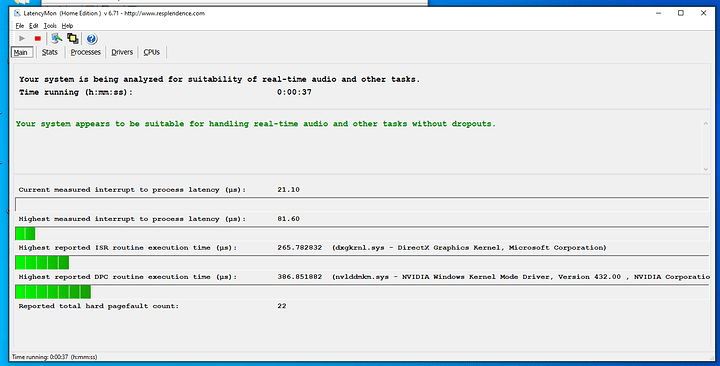 In case it is not clear, this is not an officially supported “Intel Thunderbolt” platform; we, the users, are merely working toward Thunderbolt-like interoperability.

Do you have that Designare motherboard, or anybody else has?
I would like to buy it, and so any info about it is welcome. Especially info related to VFIO

I just got it, been shooting the video so far it is very nice. the aorus extreme is the same, except even more high end, but the designare comes with a thunderbolt add-in card also.

Exactly, I also very like that it has the TB board, which make this board actually cost close to entry-level boards, plus I heard that on gigabyte boards you can select boot GPU.

Any info is welcome.
If you try 128GB (which is what I am shooting for), I would also very happy to know which kits work. It looks like 128GB is still not that out of box as one could hope).

Cooler is another thing that is problematic on TR3.
Looks like there are no (reputable) AIO that has full coverage of TR block (but due to chiplets that are more or less in the center, a regular AIO with TR bracket might be enough. I can also buy an air cooler, either that noctua one, or the wrath ripper, assuming that they cool the cpu good enough).
I probably won’t dare to use custom loop at that time.

Thanks for the guide Wendell!
Can you provide your steps of installation? Did you install the provided gigabyte ridge thunderbolt software or did you only use the legacy download? I would love for a step by step guide.

I only used the legacy drivers. Following the steps above and no installing the dch driver should get you to where you want to be.

Thanks for the info. I’ll give it a try in the next couple of days.

Thanks for the guide! Followed these steps and I’ve now got a Thunderbolt 2 drive working great with a TB2<->3 converter—I just switched to PC so this is also using MacDrive to read the HFS+ volume. Thunderbolt was a must-have for me so I’m really happy this board exists and it all works as expected.

Does anybody know if windows update would automatically update the installed thunderbolt legacy drivers to current drivers?

I suppose this will only work for Threadripper? No other AMD boards such as any AM4 boards support this do they? I would be keen to get Thunderbolt 3 on my desktop after having so many laptops that support it…

Looks like the upcoming 1.1 revision of a bunch of Gigabyte’s X570 boards will support TB3, see the compatibility list here: https://www.gigabyte.com/Motherboard/GC-TITAN-RIDGE-rev-10#kf

So… is thunderbolt support under Linux…

I honestly am curious as to why the X299 board with Thunderbolt I’m looking into has a weird PCI-E lane setup @wendell:

So I’m looking at my next X299 board and I’m eyeing the Gigabyte X299 Designare EX. Seems like the perfect board but there’s one oddity that I find extremely odd: The 3 GPU config for the CPU PCI-E lanes is x8/x16/x8… However, the X299 Aorus Gaming 7 Pro is the same board minus the Thunderbolt controller, but has the full x16/x16/x8… All reviews online suggest the Thunderbolt controller on the mobo goes to the chipset, but if a fully populated board drops the first slot to x8, something weird is happening with the lane switching. If the same board design CAN support x16/x16/x8, what’s the limitation? Board design? Lane switching? The recent Cascade Lake-X updates to the Designare allowed bifurcation of the PCI-E lane partitioning so that each x4 partition can be separated: [image] So then why do the lane switchers still cripple the top slot when fully populated? Were the materials not updated for Cascade Lake-X, or was the board designed that way? I would like an lstopo on this board, and a trace analysis of it to see where the traces for that Thunderbolt controller are actually going. If the Thunderbolt controller is indeed sharing traces with the lanes for the top slot, that is honestly bad design to provide a feature, and I would literally switch over to the Aorus Gaming 7 Pro for that reason, since the lanes actually matter. There’s no detailed block diagram for both boards so I need people who own these boards to check the traces. If the x4 lanes from the Thunderbolt controller are going to the chipset, they should stay isolated rather than share traces. If traces are shared, it’s bad design. I’m grasping at straws trying to figure this out… No use contacting their PR/Support since I need to actually speak to a engineer for the board to figure out why this is happening.

Any experience how Ryzen/Threadripper 3000 and Thunderbolt* is doing with Oracle Solaris?

*I really like the Thunderbolt Ethernet Bridge feature to access data with about 20 Gb from small devices like laptops where you cannot pop a dedicated ethernet adapter into it.

I am seriously considering buying the Designare TRX40 board. I wanted to buy the Zenith 2, but I am hearing that it has issues with booting more that 2 GPUs (my system will have 3), plus bunch more of issues.

Could someone of you do some research on this board?

I mostly need info about VFIO on this board (I don’t care if I need to use ACS overide), and I would like to know USB topology of the two USB controllers that are connected to the chipset, so that I can understand which ports I can pass through on each controller. Its does a bit suck that onboard sound and bluetooth are hardwired to these controllers since that forces me to pass them through.

ASRock recently released a BIOS update for the TRX40 Creator with the description “Improve thunderbolt compatibility”, and there’s now a thunderbolt section in the BIOS config. As far as I know there’s no TB header on this board - maybe a pad, but no connector. Would BIOS support somehow allow an add-in card to work without a header?

I have that board too and saw that and have been emailing with Asrock support, and lo and behold the reply in the end was that Asrock TRX40 Creator does NOT support Thunderbolt under any circumstances. I ofcourse replied back why on earth they would inlcude it in the p.1.40 BIOS and the BIOS option as You mentioned and am still to hear back from Asrock… i give it 2 days then all the TRX40 Creator mobos go back and it will be Gigabyte. I have always loved Asrock but for TRX40 they are a big disapointment this time ! Also the “USB” Realtek Audio is disappearing intermittenlty and You need to reboot to get it back (tried fresh install and 5 different drivers all same result) very disapointed with Asrock for the TRX40 series,

The Titanridge TB3 card i have works on many other (both AMD and Intel) mobos that dont have the TB3 header on the motherboards (i can get it to work on all the other motherboards) so this is an Asrock and TRX40 blunder.

Fwiwnorder the designare. I asked about the compatibility of thunderbolt on the non designare because it doesn’t work on any other trx40 Mobo since before CES and have yet to get a reply other than looking into it … so get the designare

It should work but currently doesn’t. There is a few bits missing from the bios.