Getting Started With: Video Editing in Blender

Recently I reposted my Blender As a Video Editor because Wendell got possession of the forums.
A lot of people liked the post and wanted to start using it/had tried using it but weren't sure where to start or couldn't find decent tutorials and found themselves a little confused. That's where this thread comes in. This thread will have a collection of resources as well as comments on my own experience of using Blender as a video edit in a more tutorial style than in my other Blender post, which was just a brief summary on my experiences with the program.

One of the biggest hurdles with video editing in Blender (and Blender in general for that matter) is getting the interface in a usable state to do so. Knowing the interface and how to customise it is an integral part of using Blender in an efficient manner. I found that once I knew the interface the flexibility of Blender really became apparent as well.

This video will give you a basic idea of how to use and customise the interface:

This video is a good starting point but is more focused at blender as whole rather than specifically video editing. I would also recommend saving any interfaces changes in a .blend file as well, that way you can take the changes and preferences between different computers and don't have to override someones defaults. I'd also be happy to share my Master_template.blend file, which is what I saved my interface under if you want to see what I've done with mine specifically. 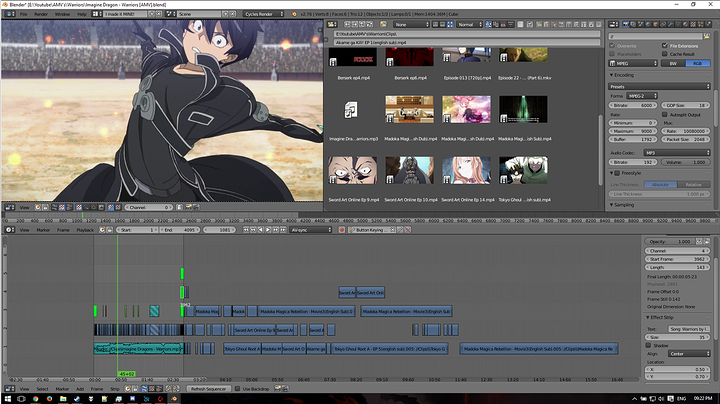 Another advantage of the Master_template idea is that you can constantly update the interface as you make and discover new work flows and it's an on going thing that won't be destroyed through updates. Just remember not to save over it when you start a new project if you decide to do this

The tutorial I found to be the best for a beginner to video editing in Blender is this one:

It will show you how to make a basic interface that's really good for basic video editing (You can expand upon it later as you get more familiar with the program) and then gives you a good starting point for editing some video and audio.

Now that you've edited a video you'll probably want to render it. This video gives you a pretty good idea of codecs and settings that are available when rendering a project:

One thing this video doesn't show is setting the file destination of the render, so you'll want to make sure you do that before hand or you might not find your file. When I was first trying to render I didn't set the audio codec and got really confused, so if you can't see/hear anything after you render head back into the project and check yous codecs and settings to make sure everything's fine.

Since there are quite a few gamers in these forums I'll assume you all have GPU's and want to use them to speed up render times. Between these 2 pages you should be able to get it set up on any OS you may be using:

More resources to use include:

Other places, like Blender Guru, offer nice tutorials as well, though I haven't seen too many on Video Editing as those communities are mostly focused around the 3D Modelling and Animating features of Blender.

Your training isn't yet over, but I have taught you all I can young grasshopper. Now that you're armed with a basic knowledge of video editing within Blender and a thirst for more knowledge go out into the internet and learn as much as you can! Learn the program to a great degree, expand into 3D modelling and other areas to augment your editing capabilities, find and use add-ons/plugins that improve your work flow and if you can program, create your own and share them with the community! Contribute and teach others, the same way I've taught you.

Thank you for this. I've been meaning to jump into Blender, it's just finding the time. @wendell showed me some VFX stuff done inside Blender and I was extremely impressed. Dose it match Softimage? Nope. But dose anything? Nope. But was I impressed? Yes!

Knowing you can also get Pixar Renderman for Blender, it's extremely attractive.

Modelling, Rendering, VFX and then Video Editing all in one package? Very attractive.

Once some projects are finished up, I may jump in. I will post results when I boogie into it.

how would blender compare to something like the free version of resolve? i am done with vegas and i don't want to pay a lot for something i will probably use a few times a year

Gonna have to check this out, currently using movie maker because resolve doesn't get along with Shadowplay recordings

It's done on an image but it can be applied to videos.

This is some good shit right here. Thanks for sharing!

No problem :D The community asked and I answered.

No amount of likes is sufficient to convey my gratitude for this guide. Been meaning to get my hands into Blender video editing. It has to be better than windows movie maker.

Knowing that this helped anyone in the community is more than enough :D And it is xD

Bumping incase someone who needs it hasn't seen it yet.

Sorry to Necro. There are probably some new people around that might find this useful.

I hate to necro, but I think my issue would be better served here than in a new thread, plus it’ll add to the existing content.

I’ve followed along many a YouTube tutorial about the blender video editor. The issue I’m having is rendering my final video. I basically get errors, or videos with sound, but a black screen. The only format I’ve gotten to work at all is FFmpeg -> MPEG4 -> Mpeg3(Divx) but the resulting video is extremely low quality, even with lossless settings.

I’ve tried to do an AVI file, but I get nothing of use out of it, and there isn’t even a menu to set audio encoding. 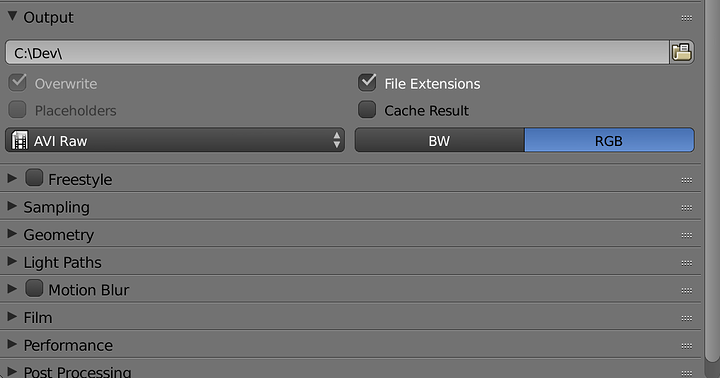 In any event, I’m sure I’ve left out something critical, I just don’t know what.

(For AVI, there is no encoding tab, that’s what I’m showing in the photo above.)

I got an answer to this on the blenderartists forum. Someone told me to set it up like this, and it worked very well; 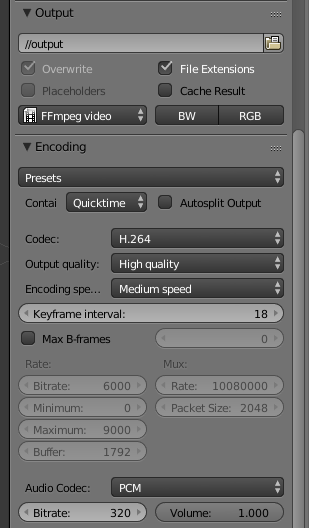 Yeah, had a lot at my old project earlier and that’s what it looked like

Nice writeup!
Ive used Blender for editing in the past. It is not bad, but requires more time, in my experience, to do things that other editors make trivial.

Example: doing fade to black. In blender, if it still work the way it did when I used it, requires inserting a black color strip and the fade effect strip. Where as kdenlive is a clock and drag of the mouse.

Blender is a fine video editor, just not the most user friendly or fastest, but this just seems to be what Blender is.

Lately I have been using kdenlive. Given the choice, I will stick with kdenlive.

I’m happy to use blender (for now) for video editing because I’m in it 10+ hours a day anyway. I know my way around pretty well, so when I see things like the fade to black workflow, it doesn’t trip me up because it’s not all that different from some other processes in 3d modeling. And since I don’t need to do a ton of video editing, the benefit for me is just being comfortable with the software and remembering how to use it.

On the other hand, if I did video editing 10+ hours a day, I’d make sure I had the best video editor, like how I have THE BEST 3D modeling software, blender.

Yeah, Blender has it’s quirks for sure. I’m unfortunately using Resolve atm for my vidoes I’m working on atm cause Blender only uses 1 thread when doing video editing, which isn’t great for doing 4k.

I want to try and get the editor in a better state. I can’t code for shit though, so I need to find some developers who want to help me out

Did you just ask me to learn python?