Back in 2014 I took an online “Coursera” course called An Introduction To Interactive Programming in Python offered by Rice University. Before the course I hadn’t done any Pyhton so learned a lot and really enjoyed the language, unfortunately, since then I haven’t had the opportunity to use Python very much so I have forgotten most of it.

The final project of the course was to write a simple space shooter type game (very like Asteroids) called Rice Rocks. This was a lot of fun and I ended up adding a few additional features to the game (some additional weapons and the basis for a power-up mechanic).

All the development for the course was done using the provided CodeSkulptor web based development environment, which is pretty cool and I’ve used it since when I need to prototype small pieces of code or algorithms quickly. But I’ve always wanted to write a standalone version of the game.

So, my plan is to rewrite my version of Rice Rock as a standalone game using the PyGame library and the PyCharm Python IDE.

The original game I plan to recreate is here

Oh and here is my Devember Contract

I, Shecks, will participate in the next Devember. My Devember will be a PyGame based game called Space Rocks. I promise I will program for my Devember for at least an hour, every day of the next December. I will also write a daily public devlog and will make the produced code publicly available on the internet. No matter what, I will keep my promise.

I think that’s it … as @Dynamic_Gravity has pointed out, I am a few days late so I’d better get started

Since it’s December 4th the project is already behind schedule, so I’m gonna have to put in some overtime … just like a real project

Here’s what I got done so far:

And here’s the progress so far … a nice green window 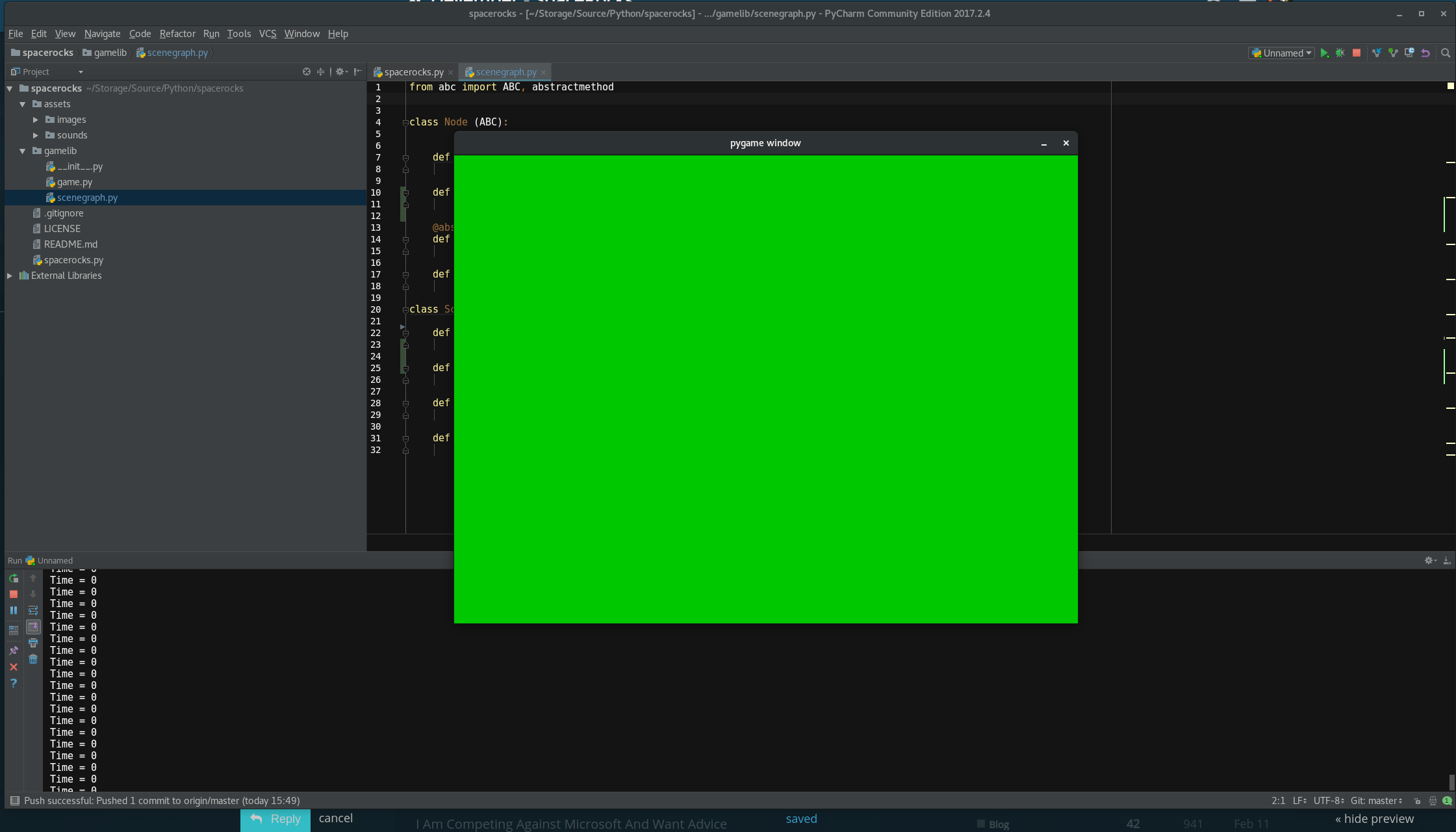 And the progress so far … space the final frontier 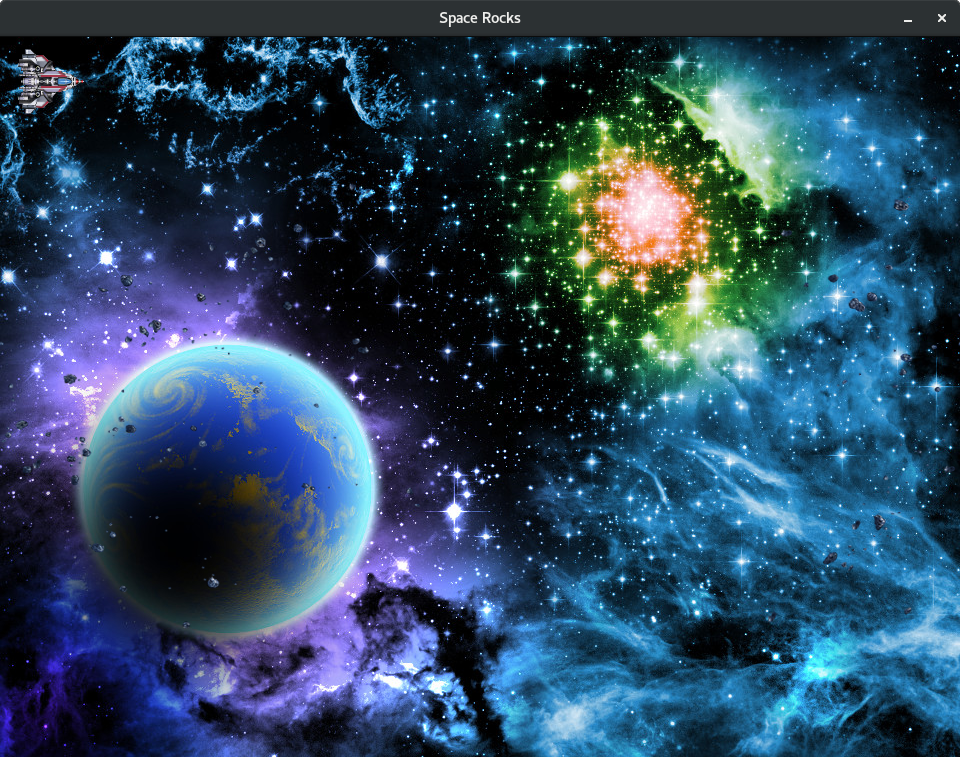 Another day of Googling, refactoring and trying to remember basic math.

But got some stuff done:

And the progress so far … Scotty has done sterling work and got the engines working! 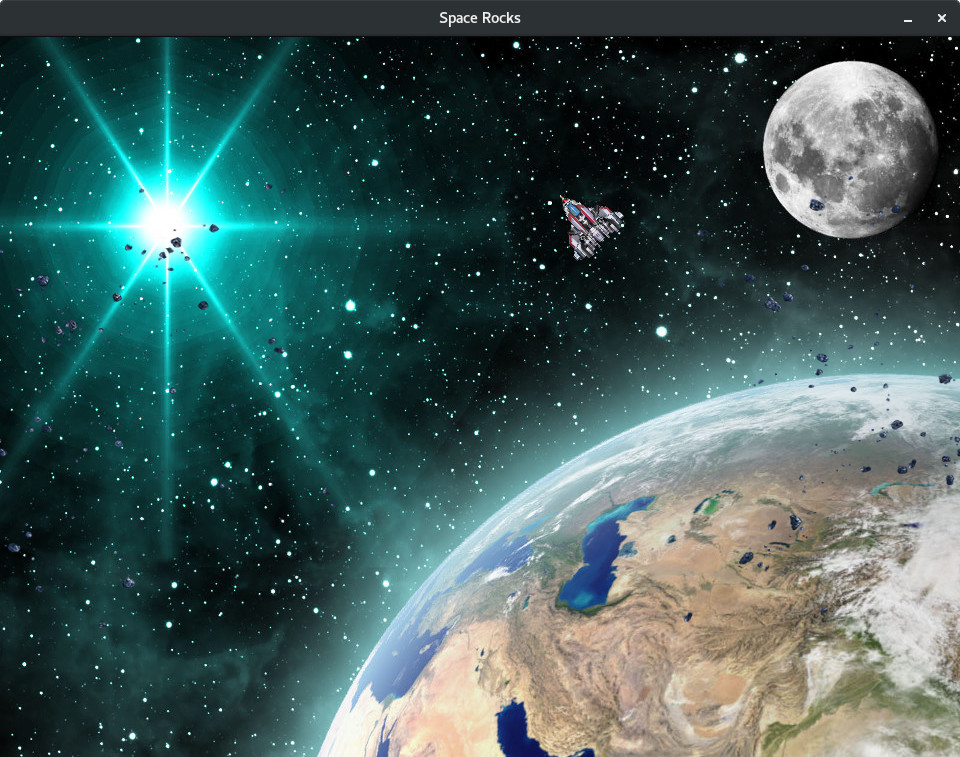 Ok, you’ll have to imagine everything moving again … I don’t know how to make a GIF (or try the code

Day 3.2 (Getting serious … or in my case desperate) 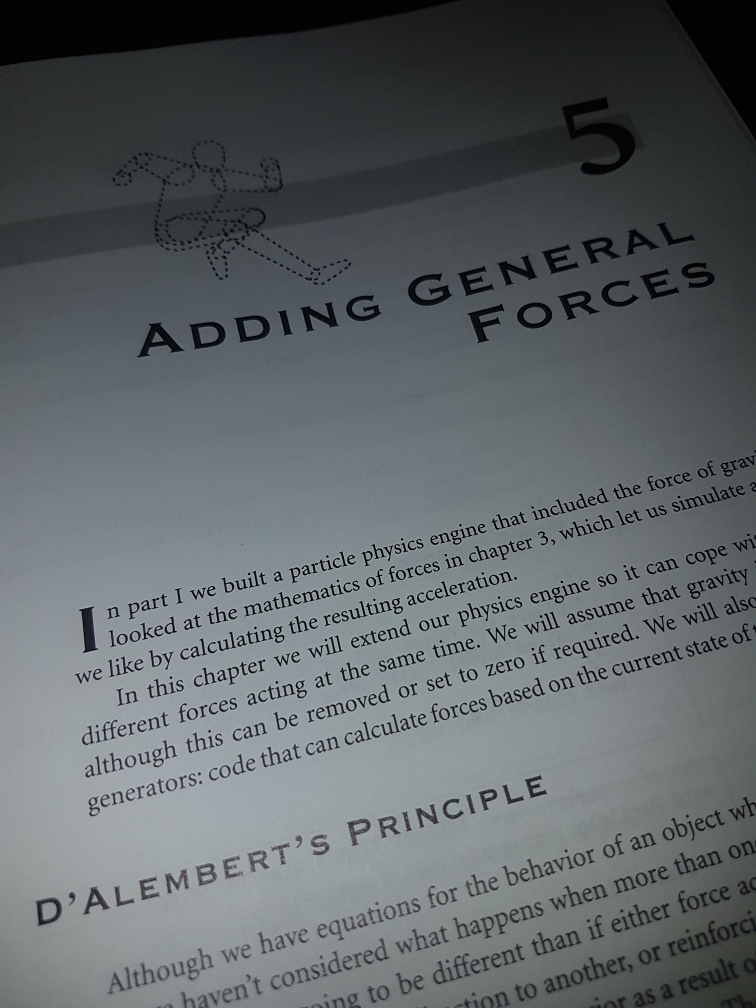 Thanks for the suggestion @kreestuh

Open Broadcaster is pretty cool and it turns out it was much easier to capture the video on Linux than the last time I did it on Windows.

Here’s a video of the ship movement and some of the space backgrounds I have. The ship still has no friction applied so it’s like trying to drive a shopping trolley with a broken wheel

the only way to slowdown or stop is to turn the opposite way … although I guess that’s how spaceships without reverse thrusters would work.

This is exactly as it should be. Don’t change a thing, except maybe the force of the thrusters. IMO, of course. It’s your game. You do you.

I really don’t like the PyGame documentation, ended up having to dig through the source code to find out that the ‘sprite.Group’ and family of classes don’t really do what I thought so I’ve had to re-think my scene management again (wondering if I should have stayed with my original ‘poor mans’ scene management)

Anyway, I did get some stuff done in between cursing the PyGame docs:

And the progress so far … FIRE!!! (those little green things) 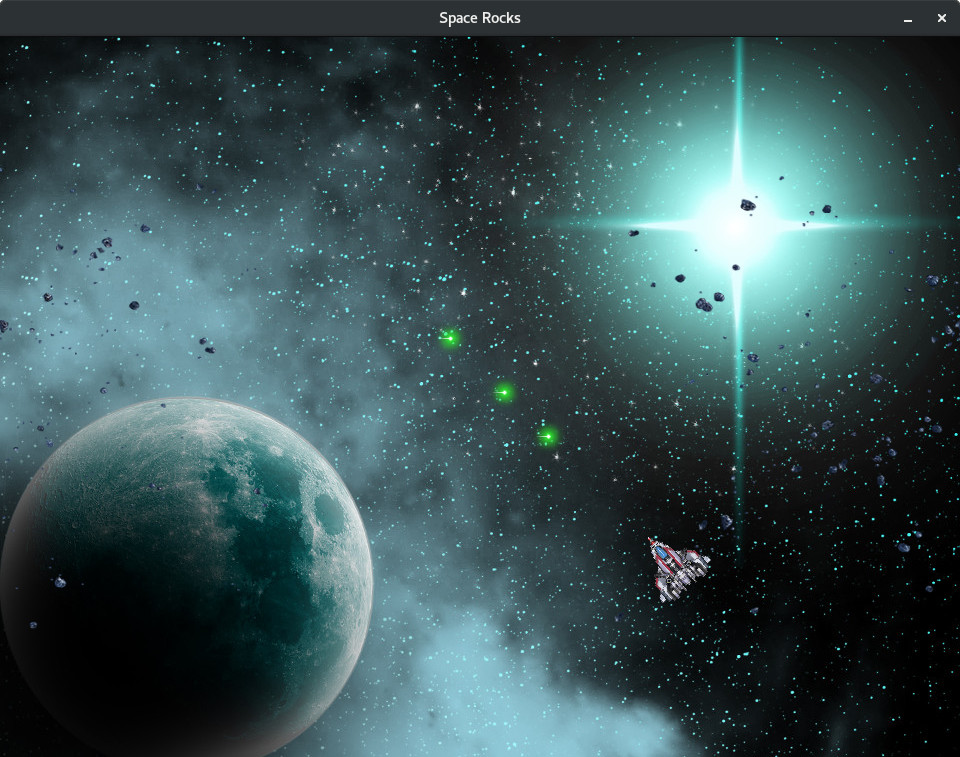 Not much of an update this time.

There’s short demo video here. It demonstrates flying the ship with and without friction being applied and the two new weapons ‘SingleShot’ and ‘RadialShot’

There’s still a bug in the code to apply friction as the ship doesn’t come to a complete stop as it should.

Nothing to see here … just a lot of code feng shui today.

Visually pretty much the same as yesterday … but I do have some fancy sprite bounding rectangles for when I get to writing and debugging collision detection. 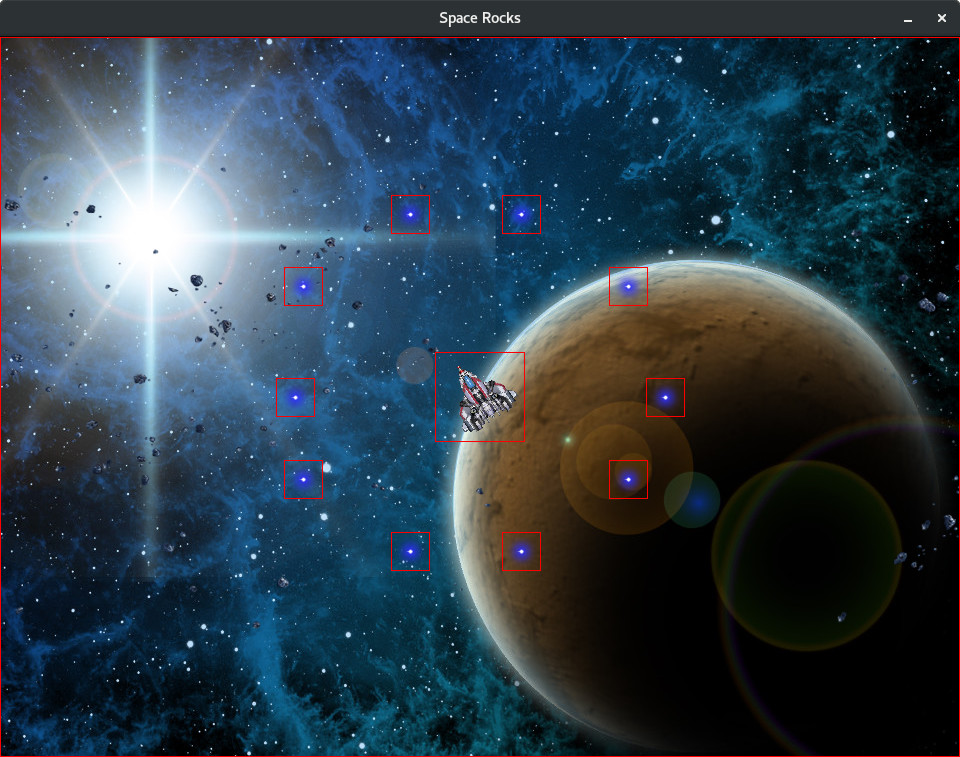 Spent a bit of time today looking for royalty free graphics and reading the PyGame docs, but made a little bit of progress with the game.

If anyone knows where I can find some nice free graphics especially some animated asteroids please let me know (I might need to change the ship too, it’s from the art supplied with original Python course I took and I am not sure I can use it)

Glad that progress is being made

Not a lot of progress today. I am not happy with the hacked together physics I have been using for the movement of the various sprites in the game so spent most of my dev time reading 2D game physics and reworking my code. I really should know this basic math.

But I did manage to get the following done:

Anyway here’s a short video of the power up testing

Oh, and there seems to be a problem with the first frame of one of the explosion animations I am using. There’s a strange square shaped alpha showing, if anyone knows how I can fix this I would really appreciate it.

Didn’t check in any code yesterday or post an update as the code was pretty broken while I did more refactoring.

Anyway, most of the changes were to the code so there’s not a whole lot to see … but here’s a screenie with lots of explosions and power ups. 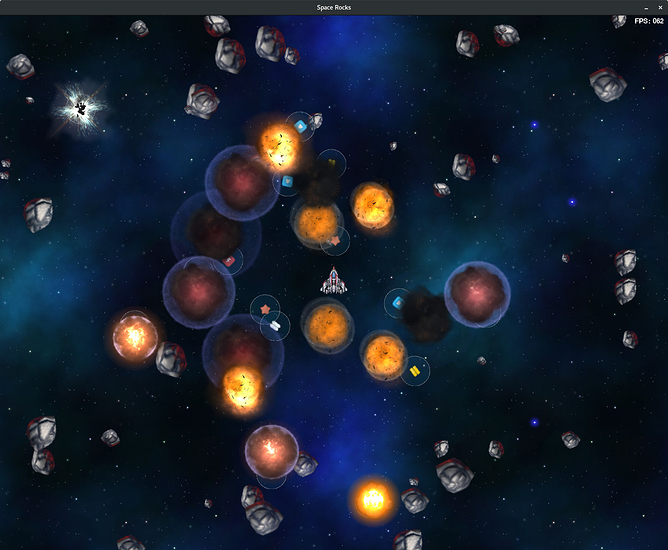 This is awesome to see.

I think there will be a bit of debugging required today … this is a really strange bug. I was just testing some new graphics for my games power ups and have managed to somehow link two completely separate scene objects together

I have no idea how the ships position is affecting the power up position.

You are putting my game development efforts to shame