Hey, I have all of those books!

Well, I can’t find the video… The guys made the show and explained what actually happens.
Frontier Elite 2 was the exact game. Basically the computers at the time couldn’t generate the entire planet at once, so they generated small box. When far away you just see something in the distance and can’t make it out to be just a cube. Slowly as you get closer they added more and more sides to the cube, adding more and more details and generating more of the planet, but only when you get close enough to see it… That’s 1993 if I’m not mistaken.
So with well made algorithm it is absolutely doable today.

PS: I found the video…

Well generally you don’t save what you generate due to the size it requires to save what’s generated. Think hundreds of MB’s or more in a single file. You use seeded generation so when a map is loaded again, the map doesn’t change while keeping actual file sizes small. The only thing you save is post generation changes. That’s the key area in interested in. That and collision detection between entities where at least one entity is generated on the gpu. Though I think with that, the simple answer is to do collisions through calculating land for the edges of a hit box.

The other side of this is I want to be able to deform body work on a vehicle in Collision on the gpu, then export that as a tessellation map for the model. To be honest, I don’t know if Vulkan is the right choice. I know it’s very much possible to do with opengl/cl but Vulkan? How much work will be required? But currently I’m just building a render engine anyway that I can use for whatever gpu based project I desire.

I want to be able to render in Vulkan, opengl and dx12 with the same api in building.

One hour a day? Every day? Maybe that will get me back into it…

The Scripting Bible is really good. I’ve only used the others as reference (got to the testing chapter of the Go book and then put it down for video lessons… Starting over, skimming to catch back up).

Either way, it’s all gonna help with Devember I think

I’m tempted to enter #devember again this year, but not sure if I should continue working my project from last year Spacerocks or do something new.

If I went back to last years project I’d probably end up re-writing it and it would just become a code clean up exercise without finishing up any of the features.

I started another project on Friday that might be a good candidate though. I started playing the Screeps MMO again recently and I’ve found that the playing experience on Linux (I use to play on Windows before I switch to Linux) isn’t ideal. I am not sure if that’s because I am using my own private server and forced to use the Steam Client or if the web client (for the live server) is the same but certainly the Steam Client is not stable, it keeps hanging and crashing.

So … I’ve been playing with the idea of writing a stand-alone Screeps Client using their (undocumented) REST and Websockets APIs and, in the spirit of my efforts in last years #devember, I’d be cheating again since I started prototyping “Screep Studio” on Friday

The plan is to developer the client in C/C++ using the Qt Framework so that it can be compiled for Linux, Mac OS and Windows. 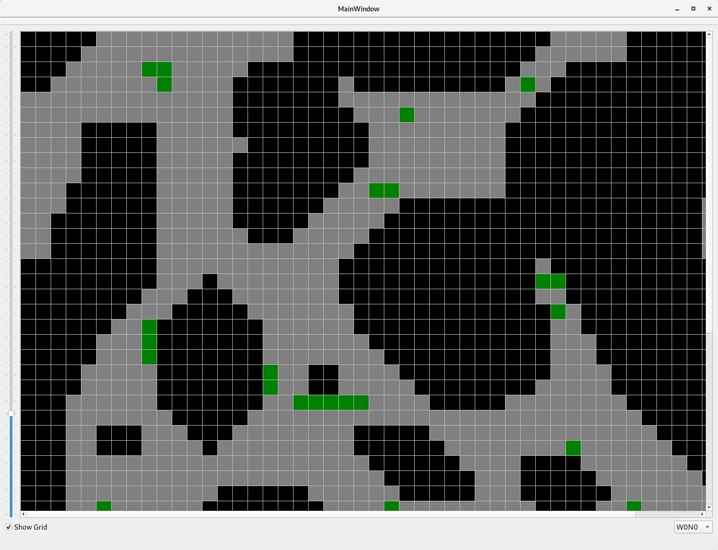 Since I’m cheating again, the prototype can already render a rough static terrain for a room which it receives from the REST API

So it might be a candidate for #devember … but would I need to downtools for a week until #devember starts?

Glad to see all the familiar faces again this year, and some new ones as well

The Scripting Bible is really good. I’ve only used the others as reference (got to the testing chapter of the Go book and then put it down for video lessons… Starting over, skimming to catch back up).

Yeah, the scripting bible was a page turner. I really liked the part about the arp flood.

I’ve been using the Go book for reference too, I read through the first couple chapters to get the basics down, then just sorta picked it up myself from my project.

Yeah, the scripting bible was a page turner. I really liked the part about the arp flood.

The “precursor” to that book, aptly titled “The Linux Bible” is equally as good. Kind of RHCSA/RHCE training, kind of zero to hero Linux book, it’s written with the same flair lol.

I read through the first couple chapters to get the basics down, then just sorta picked it up myself from my project.

I think that’s what you’re just supposed to do. Every resource I’ve used outside of that book to learn Go has spent almost half the time referencing golang.org documentation while the recording was running lol.

I, Bob Zhang, will participate to the next Devember. My Devember will be insert objective. I promise I will program for my Devember for at least an hour, every day of the next December. I will also write a daily public devlog and will make the produced code publicly available on the internet. No matter what, I will keep my promise.

I will be grinding webdev to make my websites not suck, so in the future I will have a marketable skillset.

dont forget to add yourself up top

And make a thread. Also,

My Devember will be insert objective

Don’t forget to fill it out

My Devember will be insert objective

Don’t forget to fill it out

Wow, consequently, doing my own webpack integration instead of taking it for granted in the other large frameworks I now have a much better understanding of how webpack actually works.

I’m trying to ensure that my project will actually be usable on a 2G connection. Although I think slow-3G might be a better target.

Honestly, who doesn’t have at least slow 3g?

Yeah, haha
gazes elsewhere
Everyone have 3G…
He he…
awkward laugh

Oh, that’s fair. I do lose signal in the mountains out here sometimes too.

Hey @Argon, I’d say that Devember is a success so far