Finally found the ‘feature’ in my code that caused the mysterious elusive power up phenomenon: -

It turns out that mutable default arguments in Python don’t work the way one would expect if you have used the pattern in other languages.

Only one instance or ‘velocity’ and ‘max_velocity’ are created when the ‘def’ is first evaulated. Any subsequent uses that don’t specify the arguments (my PowerUp subclass) will just get a reference to the previous object instances.

Which explains why when I moved the player ship, the power up also moved … because it was sharing the same velocity vector object … Doh!

Even worse, apparently it’s a very common error for people new to Python.

Oh well, since one of my #devember goals was to improve my Python knowledge, I think this still counts … lesson learned

You are putting my game development efforts to shame

Ah, I think it only looks that way because I’m kinda cheating, I have a bit a free time at the moment so I’m spending far too much time on #devember

Mostly bug fixing since yesterday, but did manage to get the new animated power ups in and spent some time thinking about some of the game mechanics I’d like to implement. 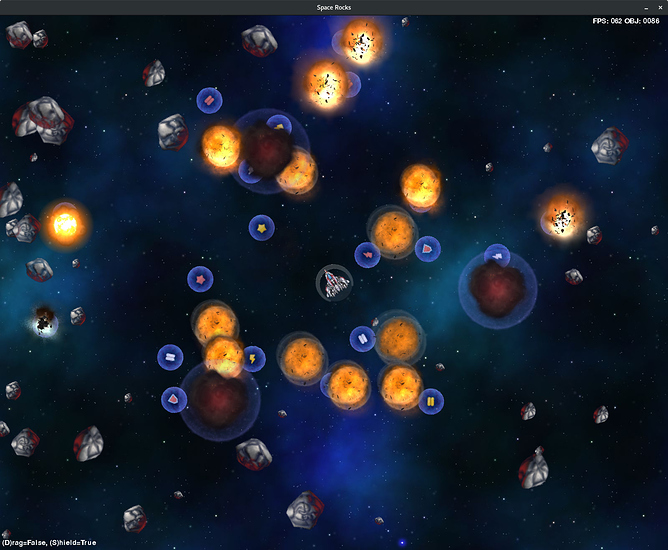 As a bonus side effect of #devember, I’m getting a lot more experience with GNU Gimp. I still can’t draw but thanks to Skorpio’s excellent Space Ship Construction Kit on Open Game Art … I’ve got a new space ship

It’s probably more efficient to draw all the different components of the ship separately at run time but I’m lazy and figured I might have issues placing the parts due to distortion when rotating the ship, so I decided put all the different combinations (stationary ship, ship with engines on, ship firing main cannon, ship firing main cannon with engines on etc) in one sprite sheet and see how it works out.

Gonna need to tweak things a little, because I included the muzzle flashes and engine flames in the sprite sheet the center of rotation for the ship is off …

I can either make the sprites taller so that the ship is centered or maybe add an offset property to my KinematicSprite class.

I did do some research though. I am struggling to make Space Rocks feel like an actual game, to me it just seems a bit lifeless (when I add audio it should help a little) so I have been reading a lot about game mechanics and “feel”.

Even though the ship moves around the screen it doesn’t feel like it’s moving much at all because the background is static, so I am thinking of changing that.

I am playing around with the idea of adding a camera and viewport mechanism. The camera will follow the player ship (which will either be fixed in the center of the screen or contained in some sort of limited bounding box) and the background will scroll to give a better suggestion of movement.

If I go ahead with this there will be a lot of refactoring but I think it will make the ‘game’ feel much better and it also opens up the possibility of having a larger game world (the scene can be much bigger than the window/viewport), I can implement parallax scrolling to add a little dept (if I can find some nice graphics) and I might even add the screen shake effect I’ve seen in other shoot’em ups.

Anyway here is how it looks at the moment. I’ve added two ships (and started abstracting all the common movement code so different ships can have different behavours and stats) and also added code to break up the asteroids when they explode.

Did some more reading up on 2D cameras today and hacked together a small test application to see how the concept works.

I’ve added a very simple Camera class to my Scene manager but will need to make a few modifications to my game library code to integrate it nicely once I get the bugs ironed out.

Been playing around with the 2D camera code. I got it to work but it didn’t play nicely with the space ships screen wrapping code.

So I went back to the drawing board and added scrolling to the background scene node instead. It took a bit of figuring out but it can now handle infinite scrolling in all 4 directions.

For the moment I’ve set it up to scroll at 1/2 the negated velocity of the ship so it scrolls in the opposite direction to the ship.

I threw together a quick and dirty parallax scrolling scene node just to see how it would look. The art work is from LuminousDragonGames at opengameart.org and there were 8 layers in the set.

Still not sure if I will use it, perhaps just two top layers for some space debris…

Been playing around with some sounds just to keep myself interested.

Now that the I have parallax scrolling background layers at 1080p the FPS is really suffering when recording with OBS, but I guess that is to be expected because I’ve only got the on-board graphics of my i7-4470K to work with. 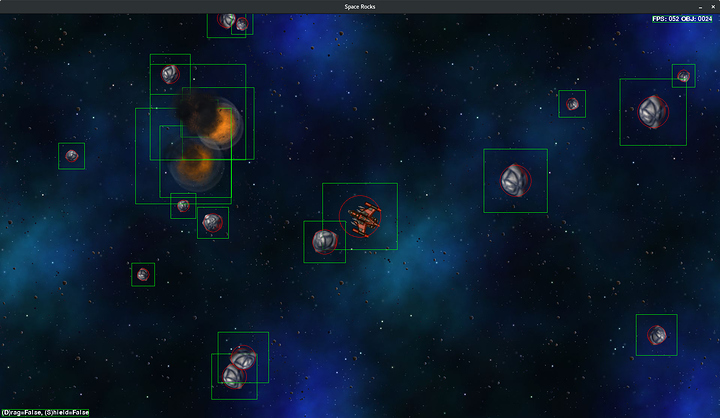 I’ve added some sound effects for the lasers and asteroid explosions.

See … there are sounds now … 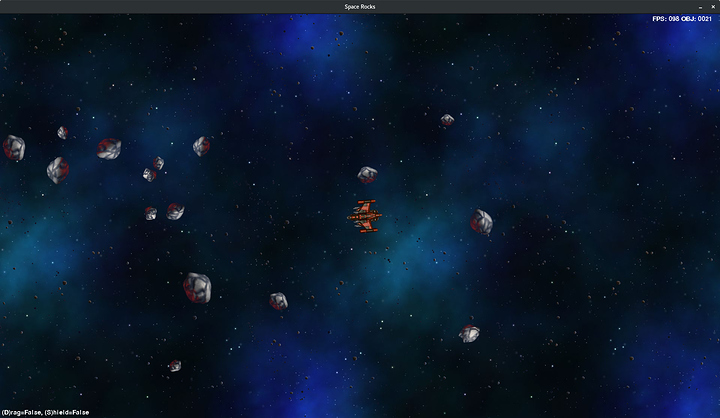 Don’t think I will be doing much more on this. It did serve its purpose of getting me back into Python for a bit but I don’t think the code I wrote was very ‘pythonic’, just refreshed enough knowledge of the language syntax for me to get something up and running.

Since it’s the last day of #devember I decided to do a little bit more on my Space Rocks game thing.

I just added a score counter and some fancy floating text to show the points scored for each asteroid destroyed.

Also, added the floating text to the power ups to display the name of the power up when it’s collected (Power ups are still just cosmetic and a work in progress as I haven’t applied them to the player yet)

The player is still invincible too, at some point I will have the ship take damage when it collides with an asteroid but I need to implement the shield feature first. My plan was to have the shield reduce the damage taken but for the shield strength to be reduced (recovering over time and via energy power ups). The ship would only be destroyed if enough damage was taken while the shield was depleted.

Anyway, here’s the state of play at the end of #devember

If anyone does want to try it out, you can hit the ‘Escape’ key to spawn more asteroids, ‘D’ toggles friction/drag on the ships movement (a feature I was playing about with) and ‘S’ to do nothing (at one point I was using this to test the ships shield)