I got the Gigabyte GC-TITAN RIDGE thunderbolt 3 card to work in windows with hot plug.

Do tell! Details man details, as much as you can with out talking software piracy of course.

Was it straight plug and play? Wendell was saying that while the last generation needed to be patched in some way to work the newer ones should Just Work™ from now on. Thunderbolt is supposed to be an open standard now so maybe Intel is finally relenting and doing what it is supposed to do with the newer cards. 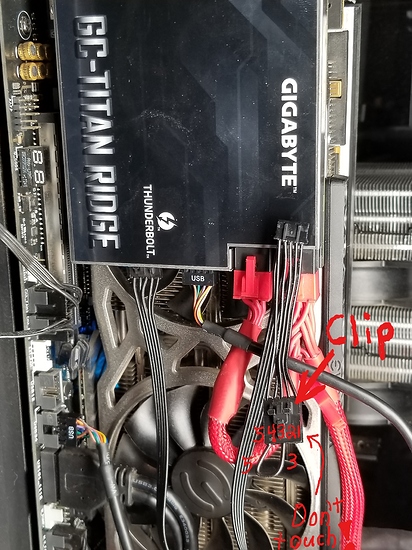 Yes, sort of plug and play just the jumper.

very exciting, thanks for the details. 40 gigabits over a tiny USB cable.

The cable that is jumpered is the one connected to the THB-C header on the motherboard?

I wonder what the purpose of that cable is, some sort of licensing / compliance interface? It doesn’t look like it’s a high speed data cable, or a power cable.

The jumper is on the cable that came with the thunderbolt card. The cable is usually used to plug into a tb header on the motherboard, in this case it is not and just has a jumper no connection to the motherboard except the usb 2.0. The motherboard in use has no thb-c/tb header.

Very cool - so it is some sort of “compliance” cable, and the jumper serves the same purpose.

I mainly use it for the built in 20 gbps + networking between my laptop and desktop now.

@wendell, not that you don’t all ready do crazy amounts of work, I would love a follow up of the old Thunderbolt on AMD video with this newness. Would be cool to see how capable it is. Like can it do external GPU and so on. I know not really practical in the real world just yet, I mean if you have the PCI slots anyway for the TB card why not an actual GPU… But if it works I wonder will stuff get embedded in laptops and have useful TB3 in AMD stuff.

How I would love and AMD nuc style PC…

Where did you find out about the shorting the pin thing?

any news on the topic? I’ve got an x399 Designare EX from Gigabyte and plan to buy the TB controller (Titan Ridge) from Gigabyte. The official Homepage, of course, does not list the x399 Designare. I’m planning to use the card as an “KVM-Switch” as there is none which supports 5k resolution 5120x2160 yet (i’ve asked ATEN support and even they dont plan to produce one soon).

I attempted this setup with my Asus Prime 399-a motherboard, GC-Titan Ridge to last PCIe port, usb to the same header, plugged in the power cables, and jumped pins 3&5. The thunderbolt controller shows (as Thunderbolt™ Controller 15EB), but when I tried putting an USB-c drive in the thunderbolt port, nothing showed up on Windows. If I plug the same drive in to the USB-c port on motherboard, it shows normally.

Though I haven’t tested the exact same BIOS version (I have newer 1203) yet. I might try to see if that’s the problem, but if anyone could chime in, it’d be great

EDIT: For some reason USB portion of the CG-Titan Ridge doesn’t work, but the thunderbolt stuff does. I have USB C on Motherboard anyways, so it doesn’t bother me.

Does it still work? I have Asus Rog Zenith Extreme Mobo and I want to have Thunderbolt 3 so that i can use an Apollo Audio Interface.
Please do tell me.
Also, what kind of wire is used as the jumper?

It looks to me like those are numbered backwards. If you flip the connector over you can see an embossed arrow pointing to pin 1. This pic shows pin 1 shorted to pin 3. Help!

I got some feedback on the topic. Bought the Gigabyte Titan Ridge Controller, shorted pin 3 &5 and got it to work. I used the DP <-> mDP Cable to pass the DP signal from the GPU to the Controller and was able to use my monitor via TB connection. Drawback is a limitation to 4k @ 60Hz. This might sound not so limiting, but i got a LG 5K display. Therefore its annoying to me. Wrote the Gigabyte support about it - lets see if they have some information to share. Maybe its a hardware limitation. (Background info: the LG5K display only got one DP and one TB port, which is not so great when doing GPU passthrough things, therefore i wanted to use TB and DP at the same time to be able to switch to the other VM via display input selection)

could you explain to me how to do that specifically I don’t know how to do a jumper cable ?

Did you try connecting 2 displayport outputs from your gpu to the thunderbolt card? I’ve read that 5k with the LG5K required 2 displayport signals. Really hoping that this works out as the LG5K is phenomenal.
Also did you get the webcam, mic, speakers and usb c ports working on the LG5K?

As per sourpy, very interested in your results. I have 2 LG 5K monitors for my Macbook Pro, but looking to share one of them with my PC running ROG Maximus Formula XI. I paused from getting the Gigabite Titan Ridge AIC because background reading about the necessity of a THB Header on the Mboard, and mine doesn’t have one… Then I saw this article about shorting pins on the header - do we expect this would work on Intel based MBoards as well as AMD based MBoards?