Submitted a pull request for a kernel config for ppc32. Once this is accepted, all of the core components for Void Linux will be done! 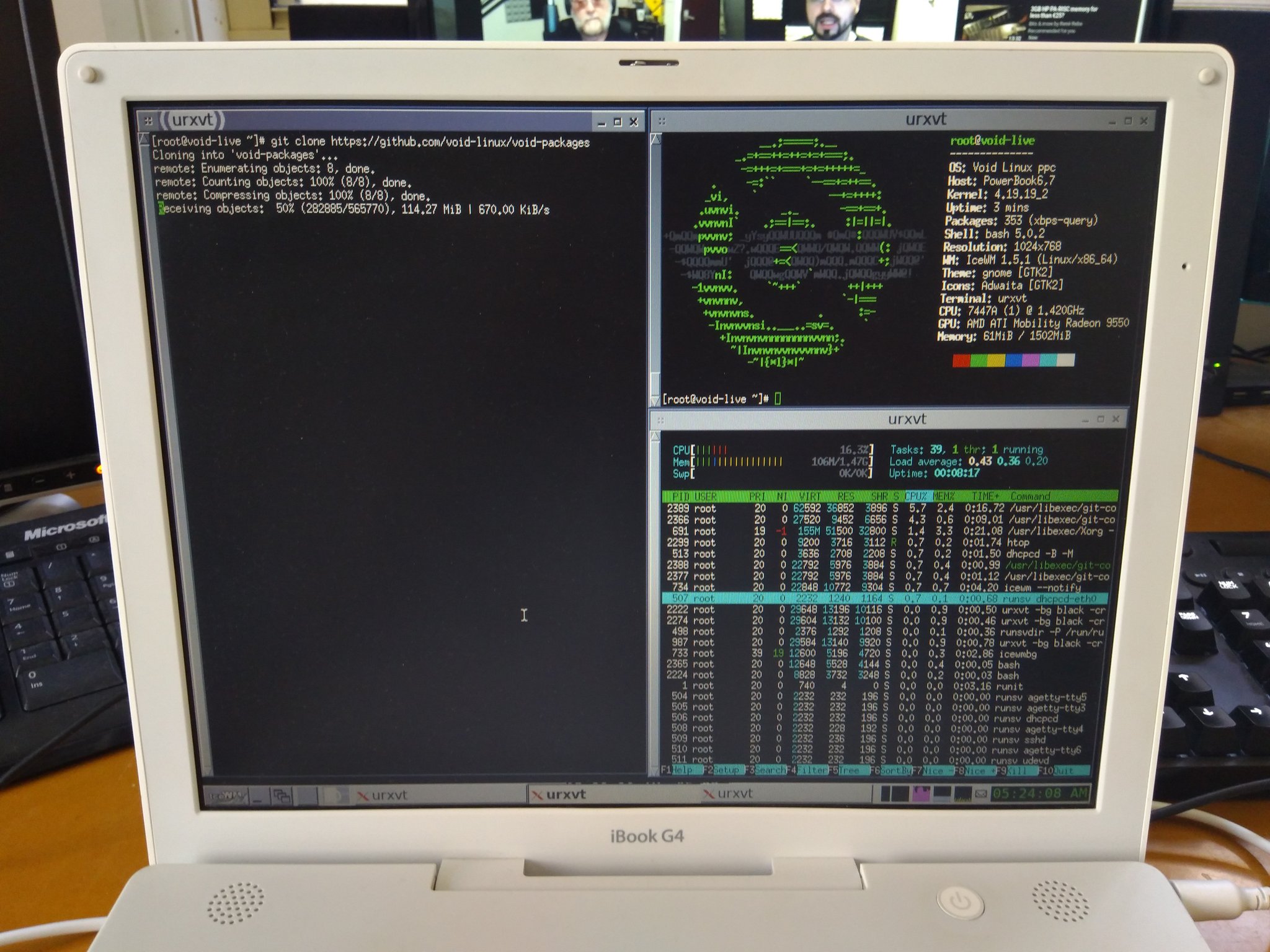 The @VoidLinux PowerPC port is coming along nicely!

The Talospace blog recently posted about an abandoned effort to have a common socket for Power, SPARC, and x86 processors:

On a recent Hacker News discussion someone pointed me to this weird historical oddity: the AMD Opteron-socket-compatible POWER7 as reported...

I mean, interfaces like DDR, LPC, and PCIe certainly aren’t ISA-specific; but it’s kind of mind boggling to me. Is there any precedent for a socket shared between vastly different architectures?

Also, here’s an interesting image I found while talking to Stewart Smith on Twitter of a Yadro POWER8 system’s memory card: 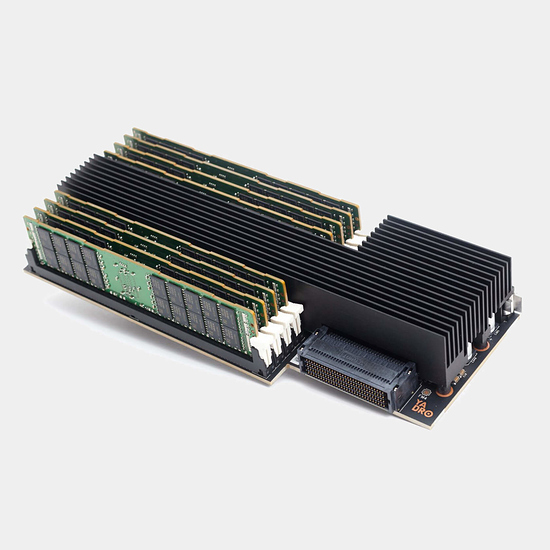 For those unfamiliar with Power, POWER8 (and POWER9 Scale Up variants) talk to memory through a Centaur memory buffer acting as an L4 cache. IBM systems come with the RAM and memory combined on one DIMM, while this Yadro system has the Centaur buffer chip on a riser card, and normal RAM DIMMs slotting into that.

Looks like the Blackbird mATX board will be getting some coverage on LTT: 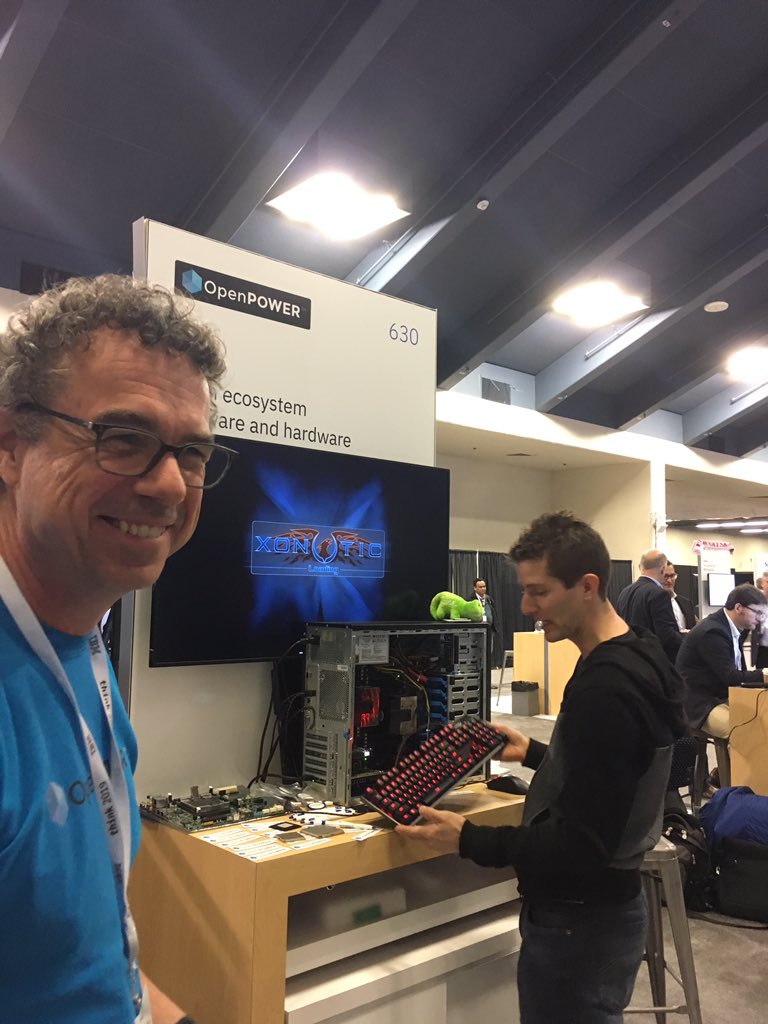 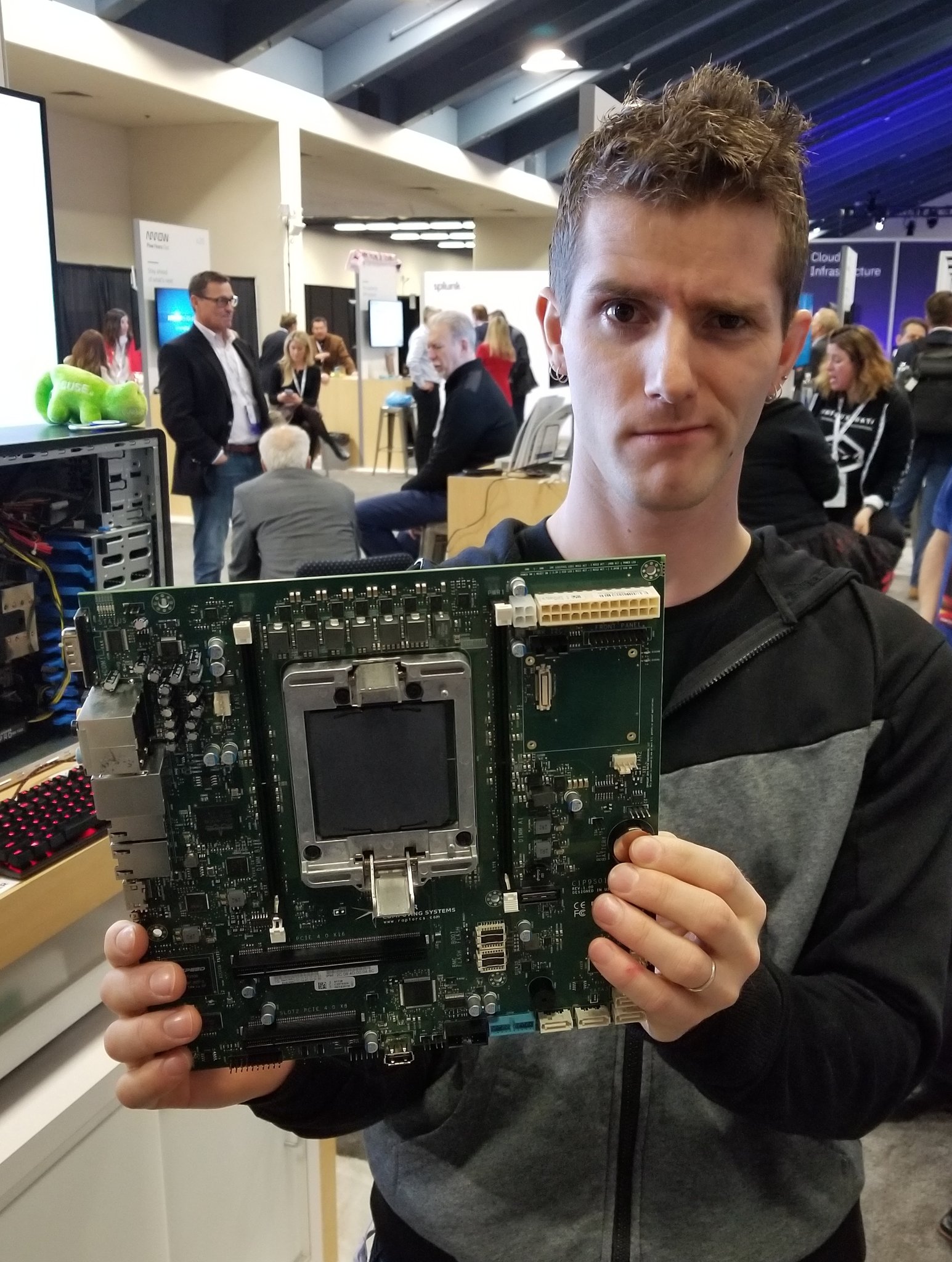 Daniel Kolesa has been watercooling a POWER8 on a Tyan board, which is really cool to see. The socket retention/cooler mount looks similar to POWER9 Sforza, so maybe we’ll be seeing some one trying this on Talos II & Blackbird? 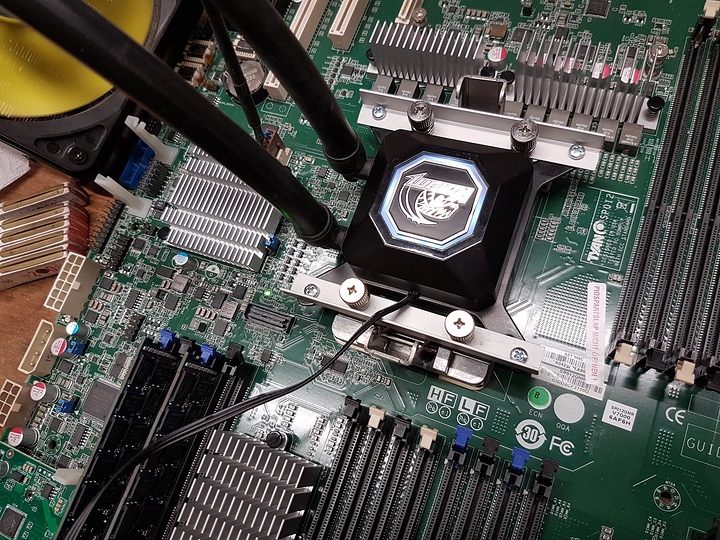 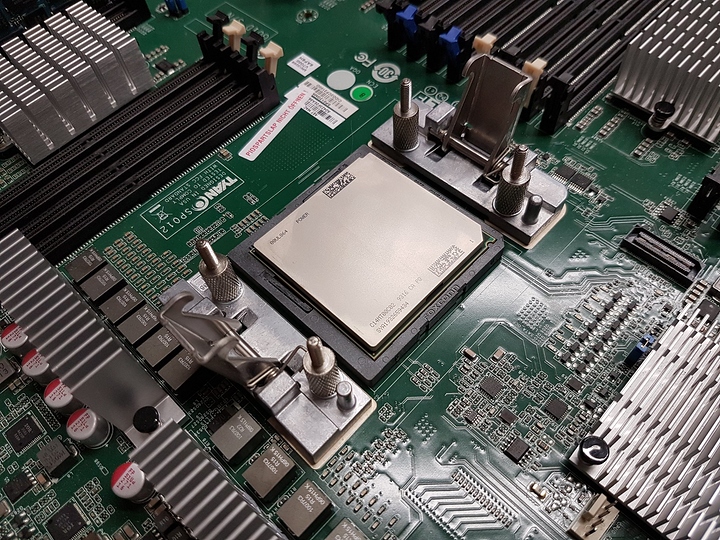 The 4 cores run so cool it’s probably fine. I am going to see about borrowing a blackbird plus 8 core once the talos ii review is done. It’s basically done now. It’s interesting.

There was some discussion on Twitter about the Power Architecture community being somewhat disparate across platforms that not everyone uses, and different subsets of the community. In response there is now an official community mailinglist hosted by the OpenPOWER Foundation:

Discussion around developer systems from the likes of Raptor (Talos II/Blackbird) as well as re-purposing older POWER hardware for use by individual developers is particularly encouraged.

All OSes are welcome - Linux/FreeBSD/OpenBSD etc.

Having the mailinglist now is good, but there will still be people hanging out at:

As well as other sites that are not strictly Talos/POWER9 focused:

MPC7500 on Twitter mentioned several other sites as well as a list of distro-specific PPC channels on freenode: 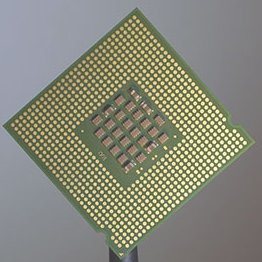 Mil-embedded blog - AltiVec is back

the page footer says it was updated March 4, but the tweet that linked to it dates to 2015, so this is probably old news

Apparently Power+AltiVec is still used in military/aviation. It’s interesting to see that the author also brings up AltiVec/VSX’s width limitation. I wonder if we’ll see IBM or Freescale (now NXP) widen this in future processors?

… while AltiVec has returned unchanged, it’s still not as wide an engine as you find in the Intel 4th and 5th generation products. Intel floating point engines are twice as wide as the 128-bit AltiVec. That means that the T-series of processors, AltiVec can perform four instructions in parallel, since, for single precision, each instruction is 32-bits. The Intel SIMD engine is 256-bits wide, so compared to AltiVec, can execute twice as many instructions at the same clock tick. 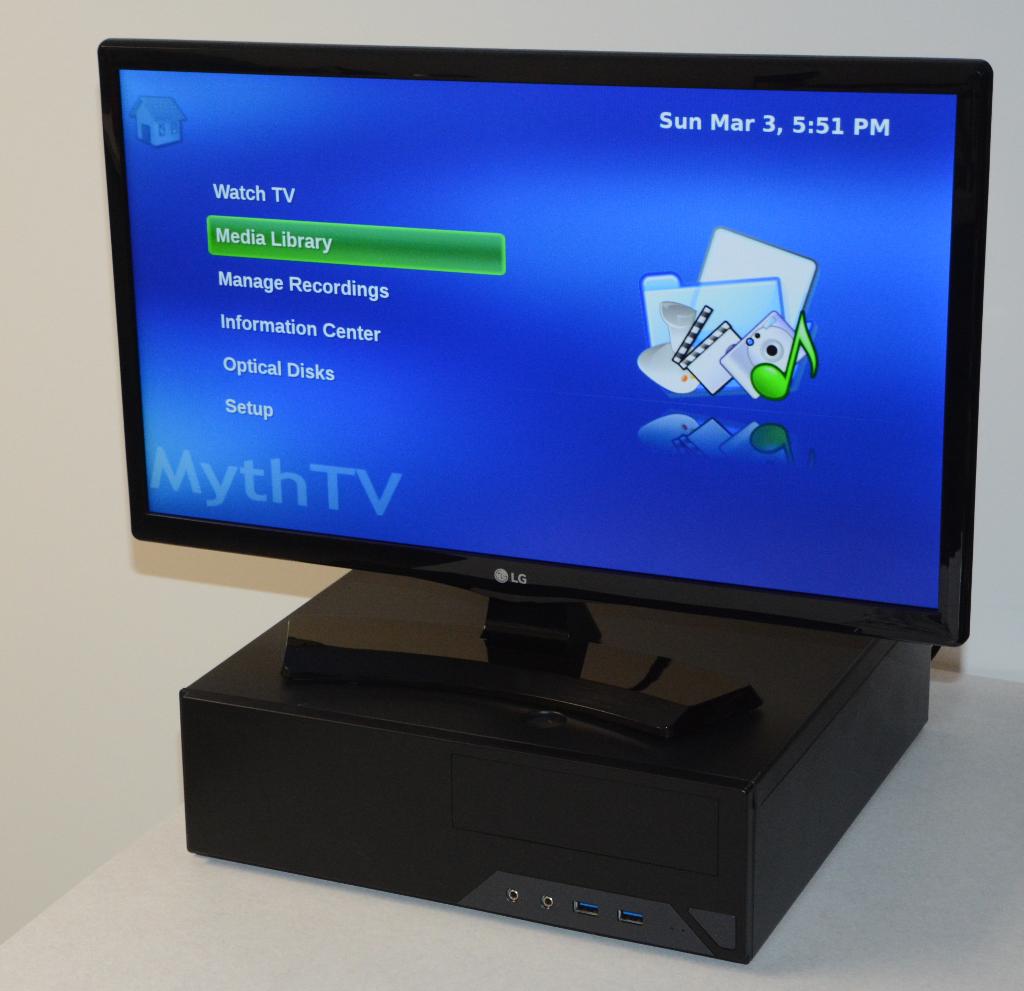 Want a shiny new #POWER9 #HTPC ? Check out our #Blackbird system! Yes, that really is #MythTV running on #OpenPOWER with an #AMD GPU driving the HDMI TV! 😁

MPC7500 dug up some links to older Power ISA documents.

Something else worth mentioning, apparently the Tyan Habanero (____-BP012) systems have a reputation for bad capacitors. Something to keep in mind if you are considering buying one to play around with: 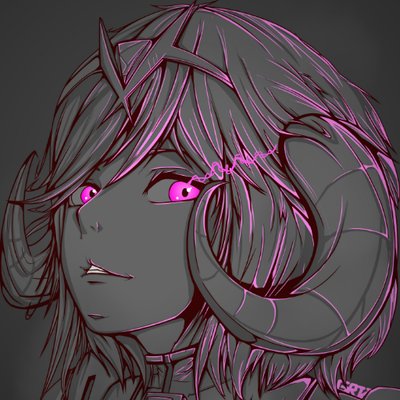 @KarelGardas @octaforge @tyan @Noctua_at Yeah, capacitors, and I mean replace them as the ones that come with it (at least mine) aren't good. The BP012 uses CRPS power supplies, which means that the PSU itself only outputs 12V, just lots of it. The actual power delivery, rails, etc, are on the board itself.
1 Like
FaunCB March 7, 2019, 11:29pm #249

Who the fuck thought that was a good idea

Hmm. This thread just went quiet again. I hear the Talos II review from Wendell is getting ready to drop. You think it may be this weekend?

I also have a Blackbird on preorder and I expect to do a video review once I have my system put together.

LTT says they have a video on the way showing off the Blackbird board when they were at the IBM Think conference, I wonder if they will release at about the same time…

@SwimSwimHungry There was a bit more activity with Daniel Kolesa (and Karel Gardas) on Twitter hacking together some non-standard cooling for Tyan POWER8 gear, if you want to be amused by that. I grouped all I could find into a Twitter “Moment” thing here: 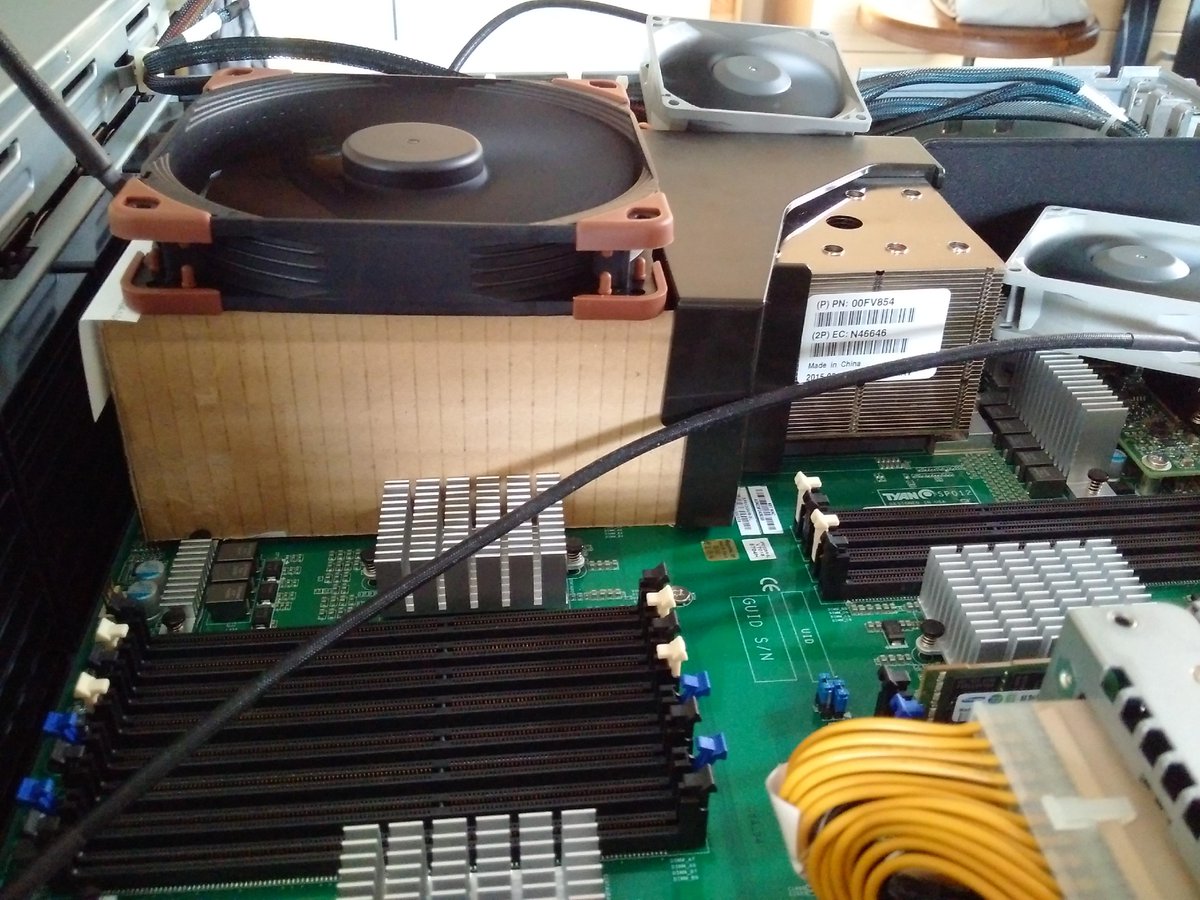 In which our intrepid explorers, @octaforge and @KarelGardas, bend old #POWER8 servers to their will with custom cooling and non-standard heatsinks!

I saw this post from Linus… but I wonder if he is even going through with this. A board like this isn’t exactly targeted towards his demographic.

To that end, he did cover the RISC-V dev board, so anything’s possible I suppose.

Yeah, I don’t exactly know the filming-publishing lag time on their channel; for all I know, it might be visible on Floatplane already?

They have a screenshot of Godot running on Power: 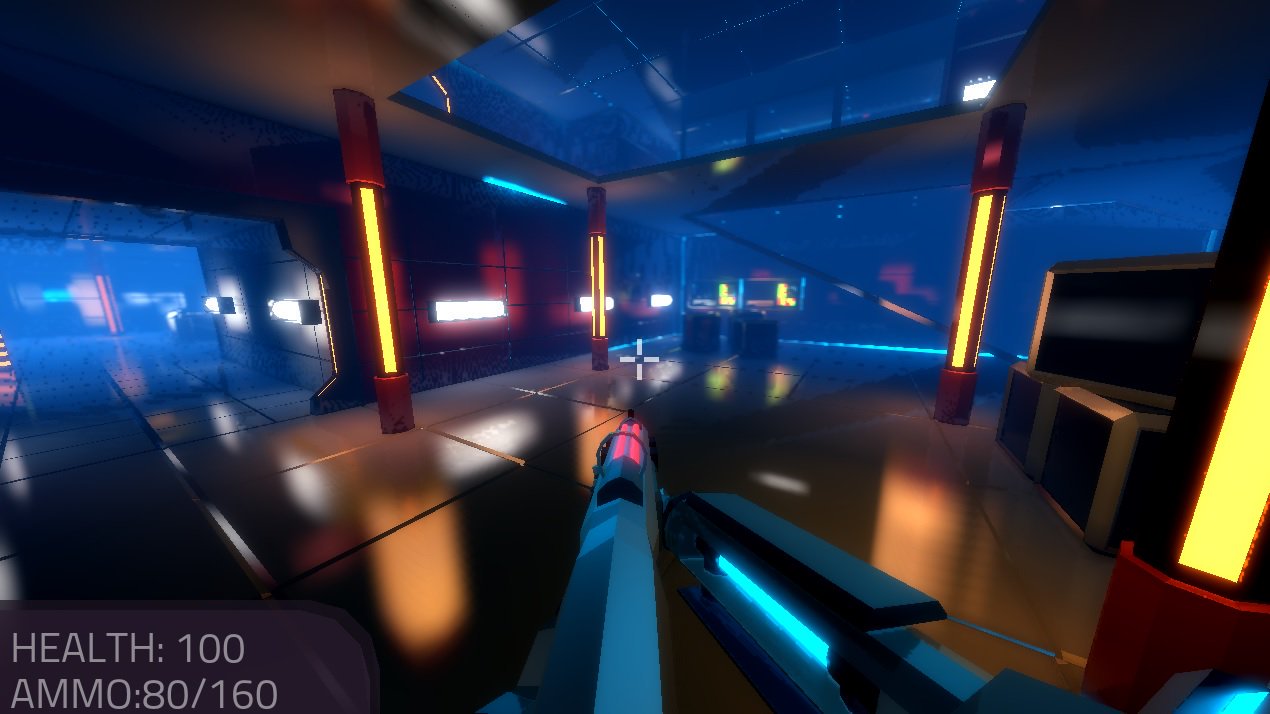 Looking to develop modern game titles on your secure, owner-controlled, powerful #TalosII or #Blackbird system? Check out @godotengine and be sure to release your new game for the POWER architecture on Linux!

I also forgot to mention that Raptor is especially optimistic about the state of the NIC firmware reverse engineering (though apparently the wiki page is a bit out of date): 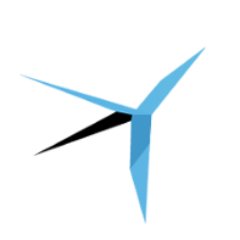 @olddellian @ChristianOhrfan @octaforge @tuxutku @tyan @IKEA The latest status that we are aware of is that the reverse engineering project is in the home stretch -- there's even a chance it might be ready for Blackbird ship!

Daniel Kolesa is successfully using the 3U HSF (heatsink+fan) that Raptor sells on his Tyan POWER8 system: 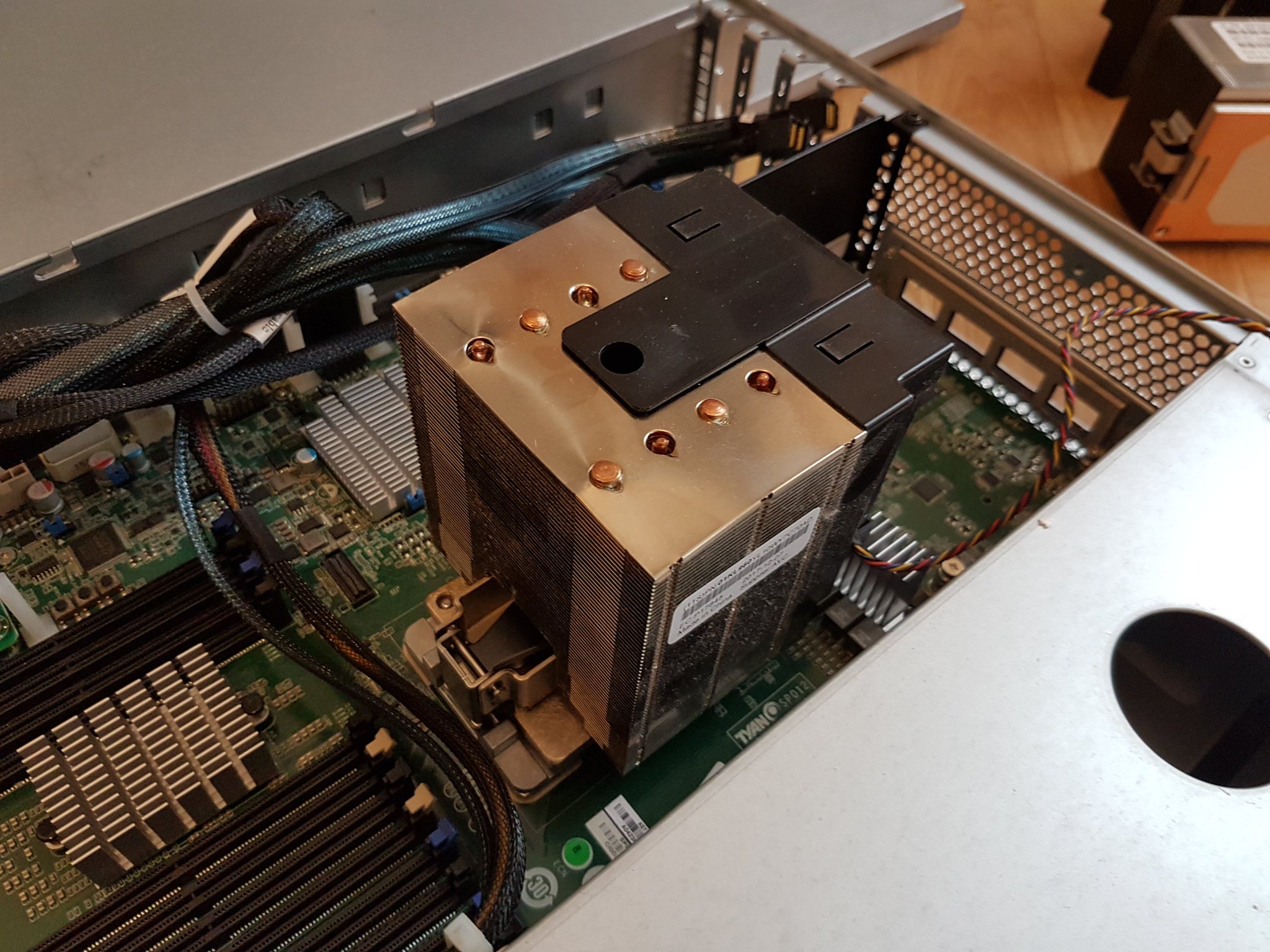 By the way, for an easier way to silence the @tyan #POWER8 server, the 3U #POWER9 HSF from @RaptorCompSys intended for the #TalosII also appears to be compatible :)

Looking at images of the different sockets, and their heatsink mounting, I’m starting to think that it’s probably all the same mounting system. For larger sockets, the screws attaching the mounting clamps to the PCB change position, but the clamps themselves always appear to be the same distance apart: 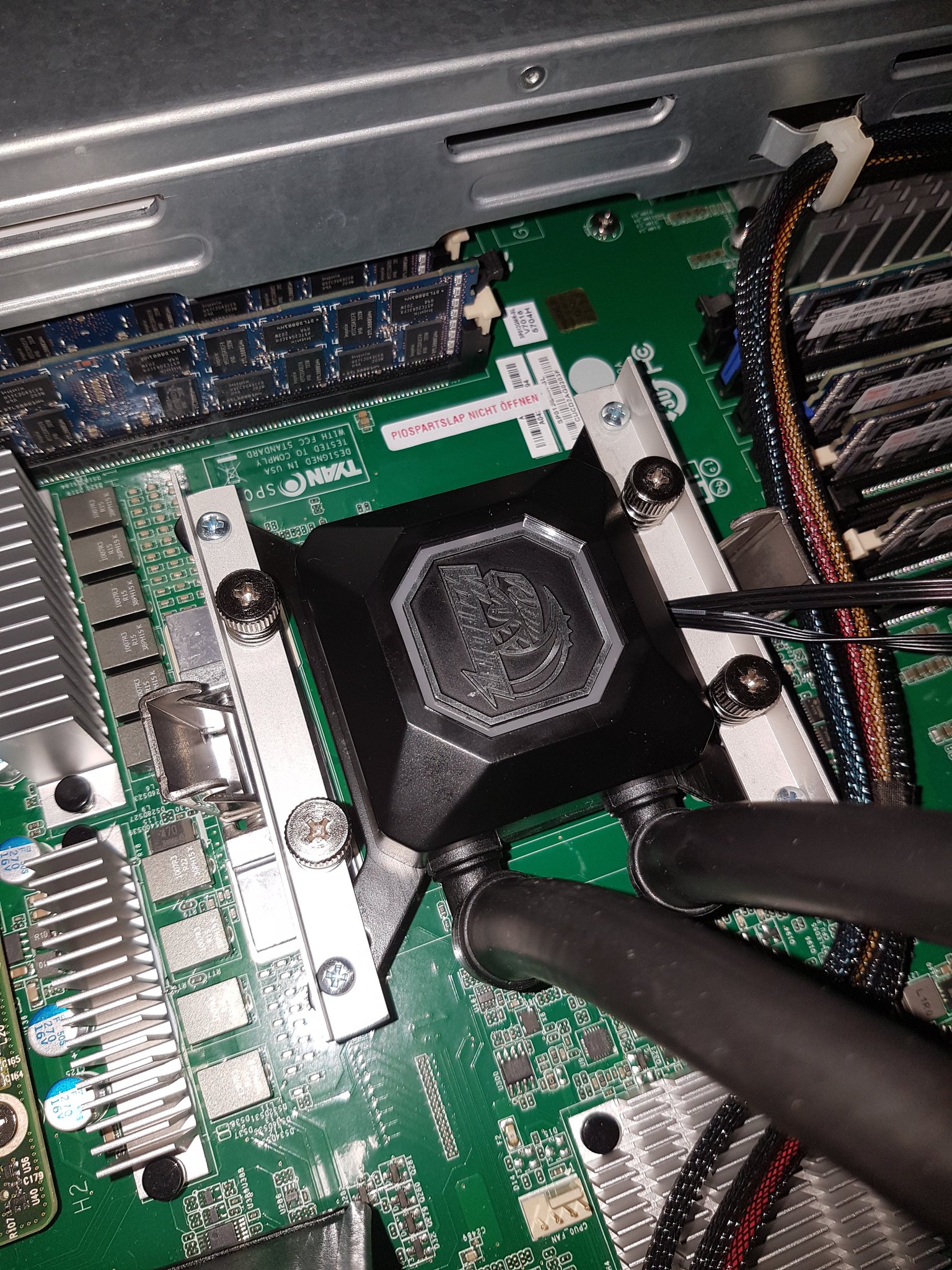 Turns out that if I added washers in this one, the pressure put on the CPU was not enough, so I removed the washers and installed the standoffs directly on the socket and the spring nuts directly on the adapters. 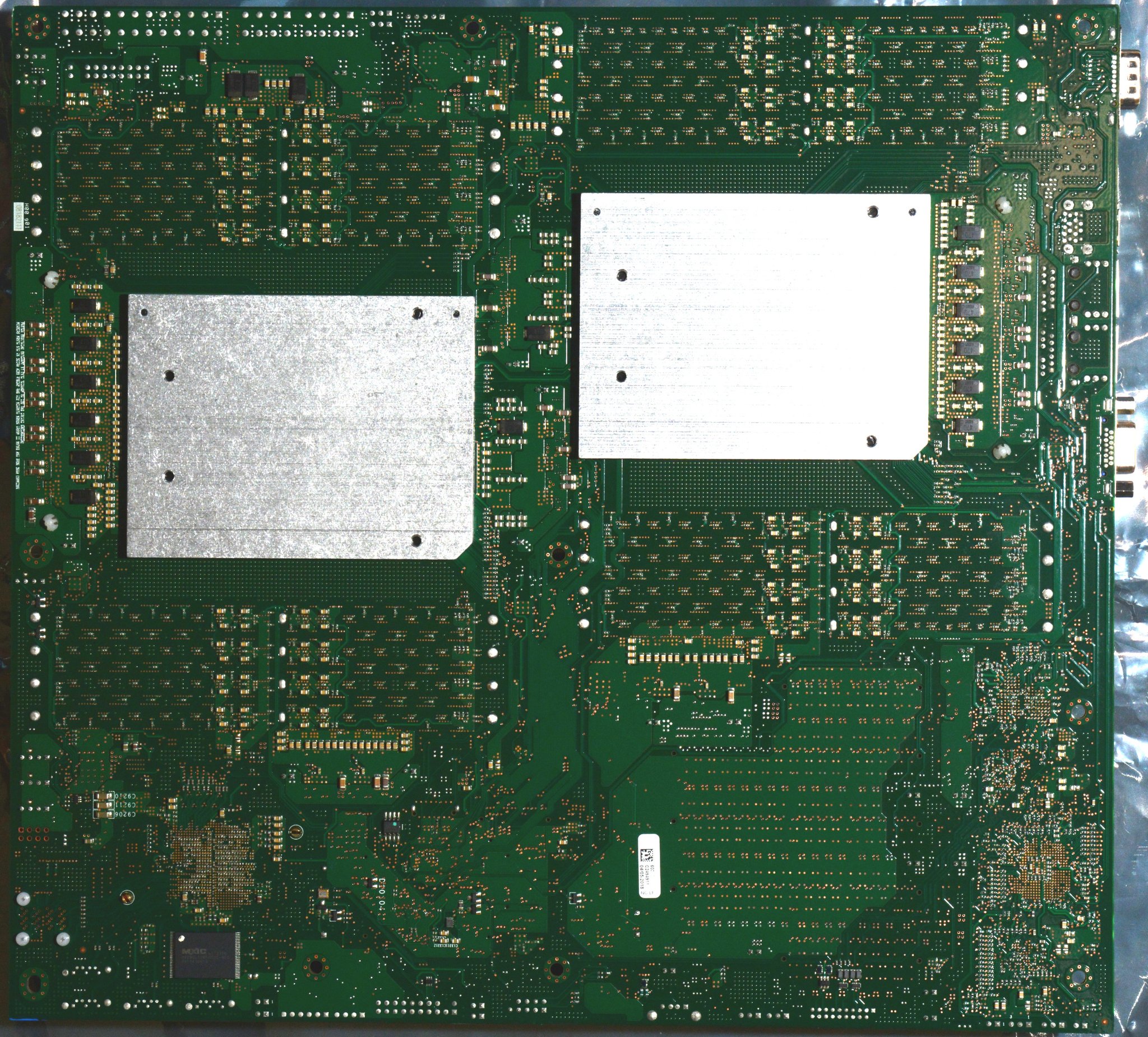 @octaforge @KarelGardas @tyan @RaptorCompSys @Noctua_at So the screw holes in the base plate would be in different locations, and the CPU socket would be a different size, but the clamps stay in the same place? https://t.co/VKdpd79oLI 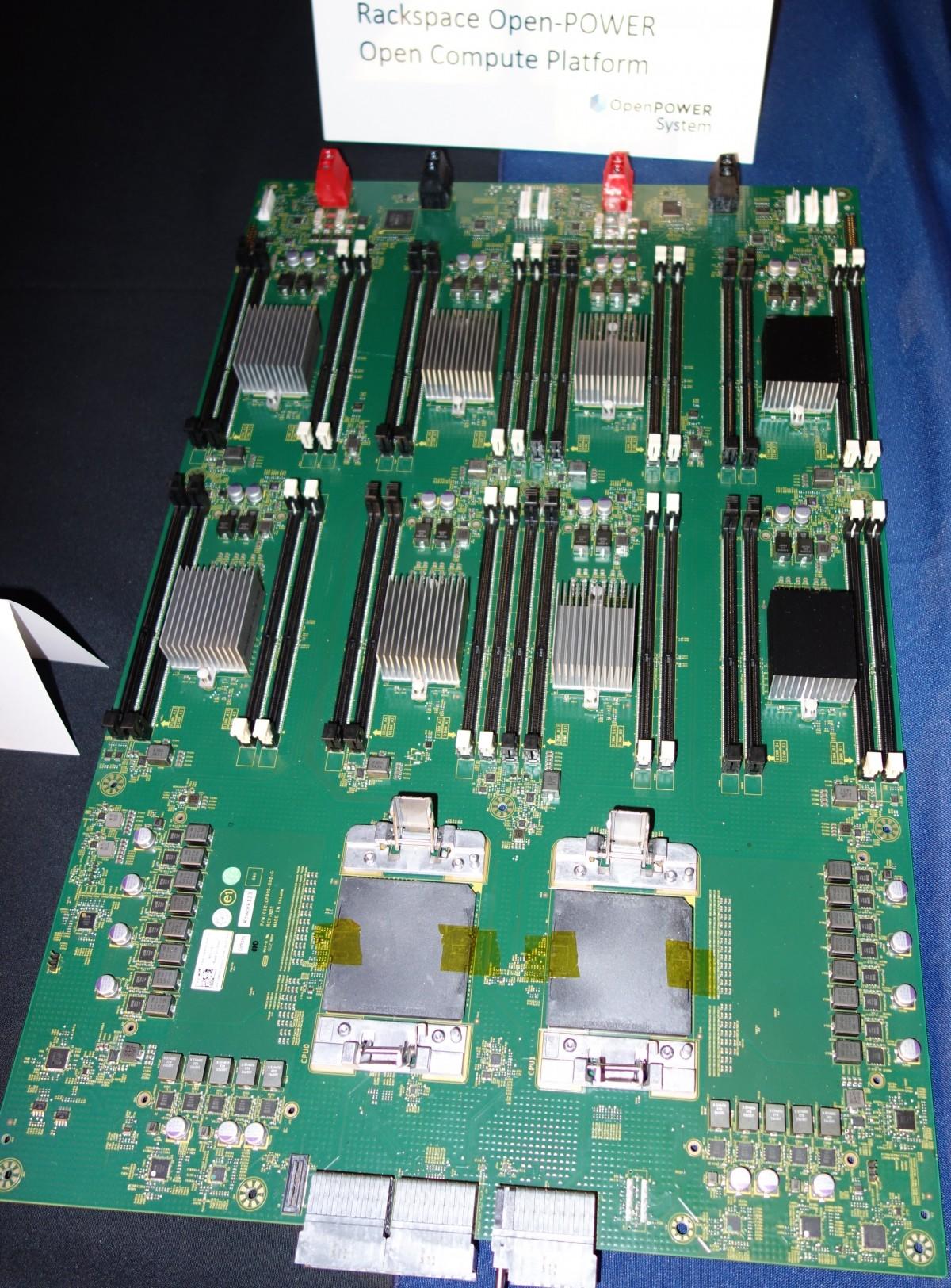 @octaforge @KarelGardas @tyan @RaptorCompSys @Noctua_at I wonder if the same mounting is also used for the LaGrange/Monza sockets? You can see the Zaius mount doesn't have one set of screws in front of the clamp like #TalosII, I wonder if that's enough to make up the difference? Sforza 50 mm LaGrange/Monza 68.5 mm 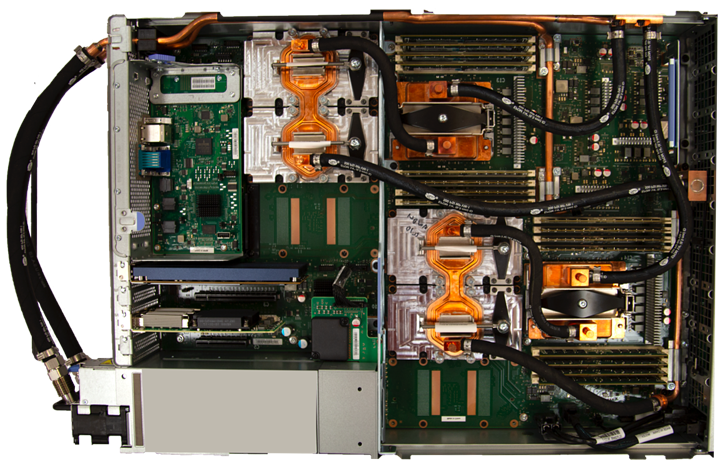 @wendell In a recent Adata NVMe drive review, you mention testing out SR-IOV on a benefactor-leased Firepro S7150.

Any plans to try that out with the Talos? or is the board already on its way back to Raptor?

I assume the userland special sauce of the AMDGPU Pro driver is probably x86 only, but the SR-IOV support would be in the kernel part and therefore opensource, right?

An Overview of Idle States in the POWER9 Processor
Interesting IBM wiki/blog page about how different idle states or STOP levels function.

Linus of LTT at IBM Think

There is an unlisted video, uploaded on March 14, but it is on IBM Systems’ channel, and doesn’t mention Raptor’s products. Found via this tweet

So Linus has the video up on Floatplane - It’s just a quick overview video of Power CPU’s.

Still I’m impressed with the coverage.

Not sure if this is something anyone is interested in, but putting it out here anyways:
I have a Powerbook G4 Titanium lying around. My wife saved it from a former employer. It’s working and i did get Debian to work on it. Battery is dead but everything else seems fine.
I’d be willing to give this away for free if anyone here has a use for it. I’m in Germany and would only ask for shipping. It’s currently running Mac OS 10.idon’tknow.
Just if someone needs a machine for testing stuff or such. I have no use for it after having tinkered with it a bit for fun.

Well I’ll be darned. Linus’ video went up, and it wasn’t bad at all!

Alright Wendell. You’re up next.

Oh, I would love to see someone like you set up a store or trading post for gear! I love this stuff, but I am not as well versed in this arena. My knowledge dates to the introduction of Yellow Dog, then I changed careers. Learning all over again.