Hey mate where can I find the 0801 Beta UEFI or the latest beta? Their main site only shows 0701 and that looks like an old AGESA update?

Hey mate where can I find the 0801 Beta UEFI

There are also some settings I would recommend changing. We should do that once you are ready. One change everyone should do, especially on air and OC if you want.

Use WinZip or equivilent…

I talk about all the mechanical keyboards I’ve amassed, plans for the first Threadripper build, a look at the pfSense router (on the table) and some other bits about going 10G.

The core bits arrived in a single Amazon order (as you may have seen in my recent vlogs) and so my first task was to get a ‘smoke’ test (as I like to call it) done. 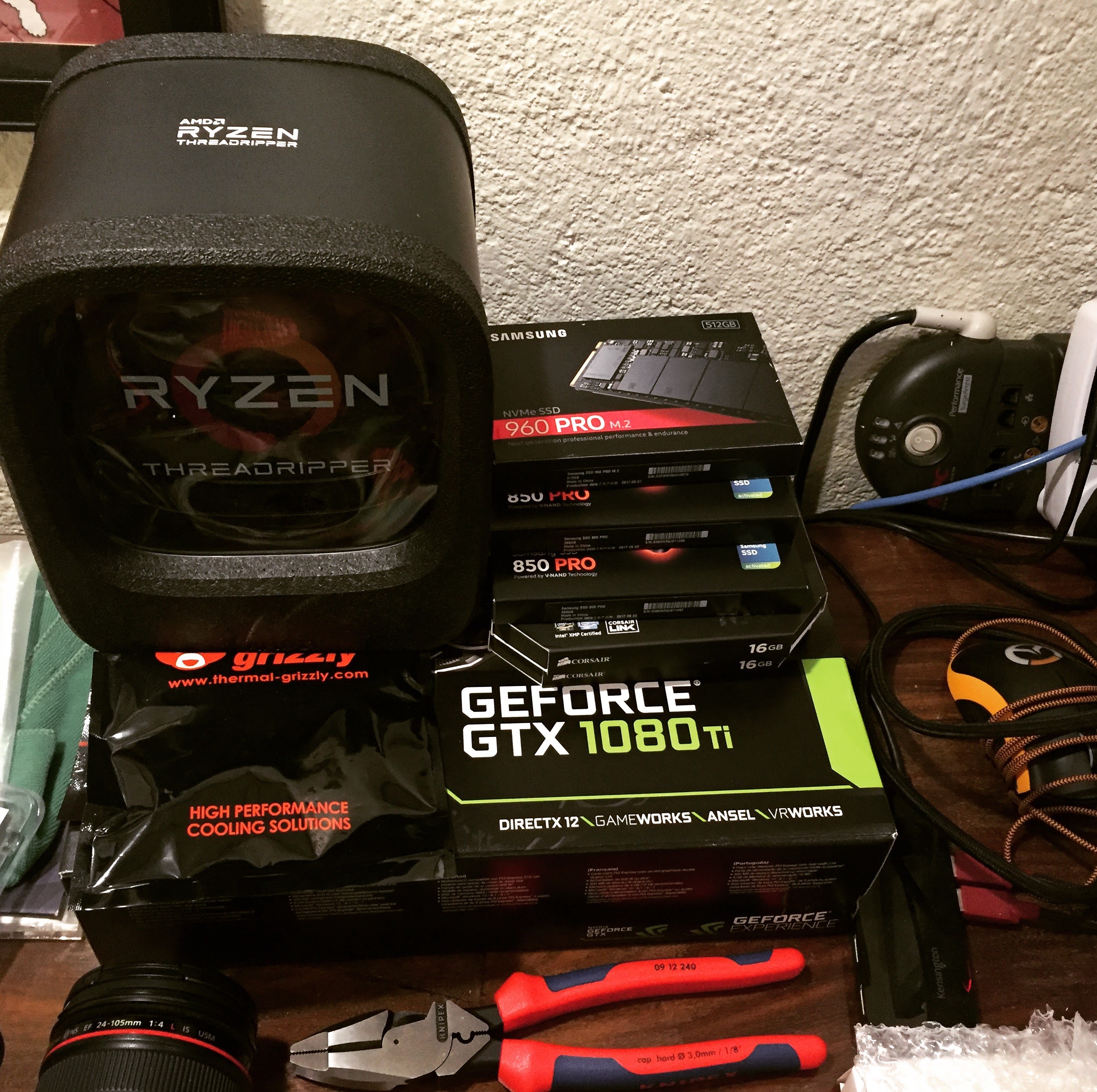 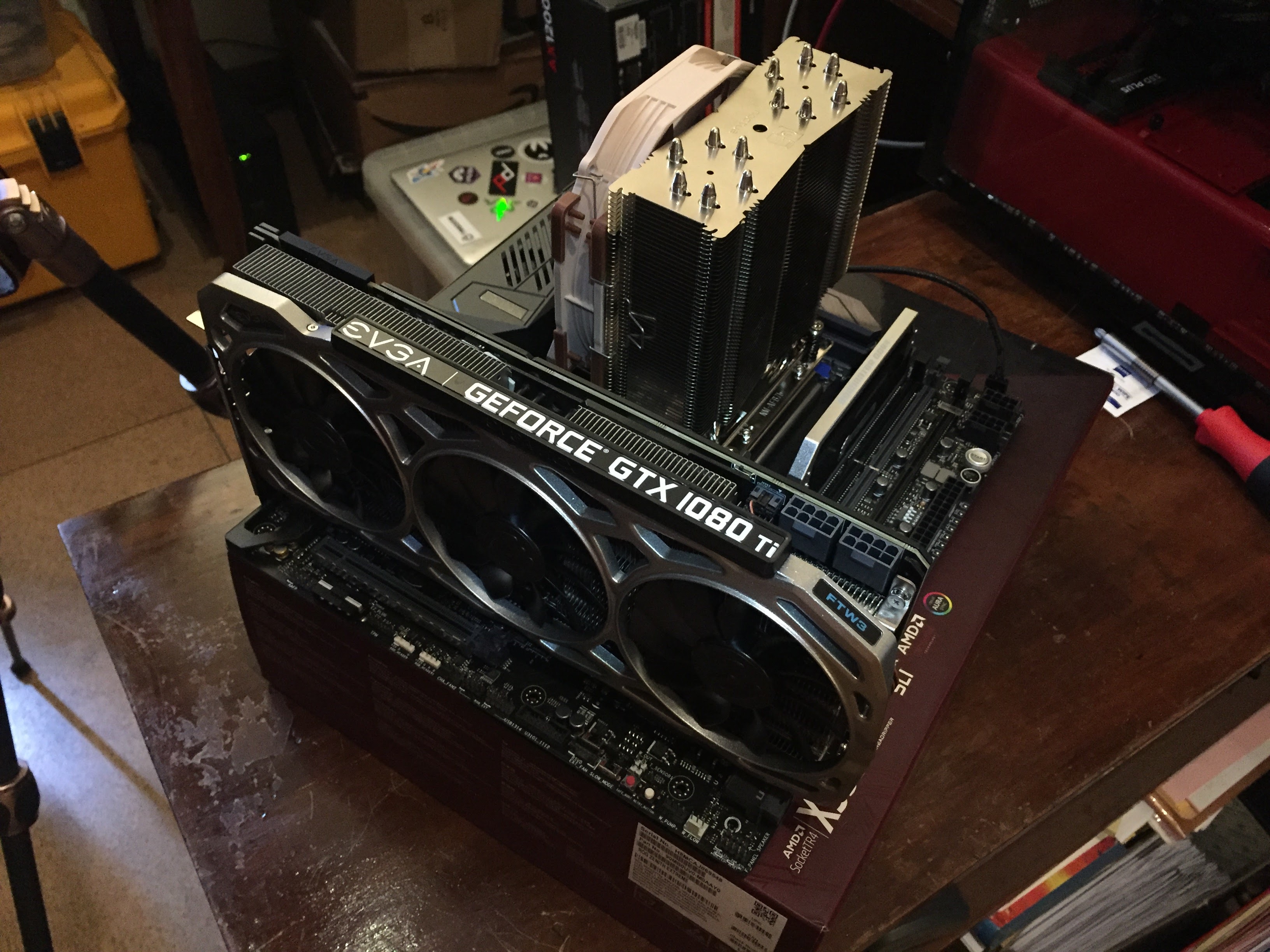 This is with the box sitting at the Fedora 26 (gnome) login-screen. I’m basically tmuxed in until a long Display Port cable arrives.

I followed the same process this time around, on the stock UEFI (I haven’t updated it yet), which is 0401 on the ROG board with the following config-

I first tried 1.45vdc on the DIMMs, but later increased this to 1.48vdc. It was far easier to get this kit to boot at 3200MT/s. I also disabled Asus’ Overclocking Enhancement, as I didn’t want all the cores being pushed to 4GHz+ in no-load conditions. 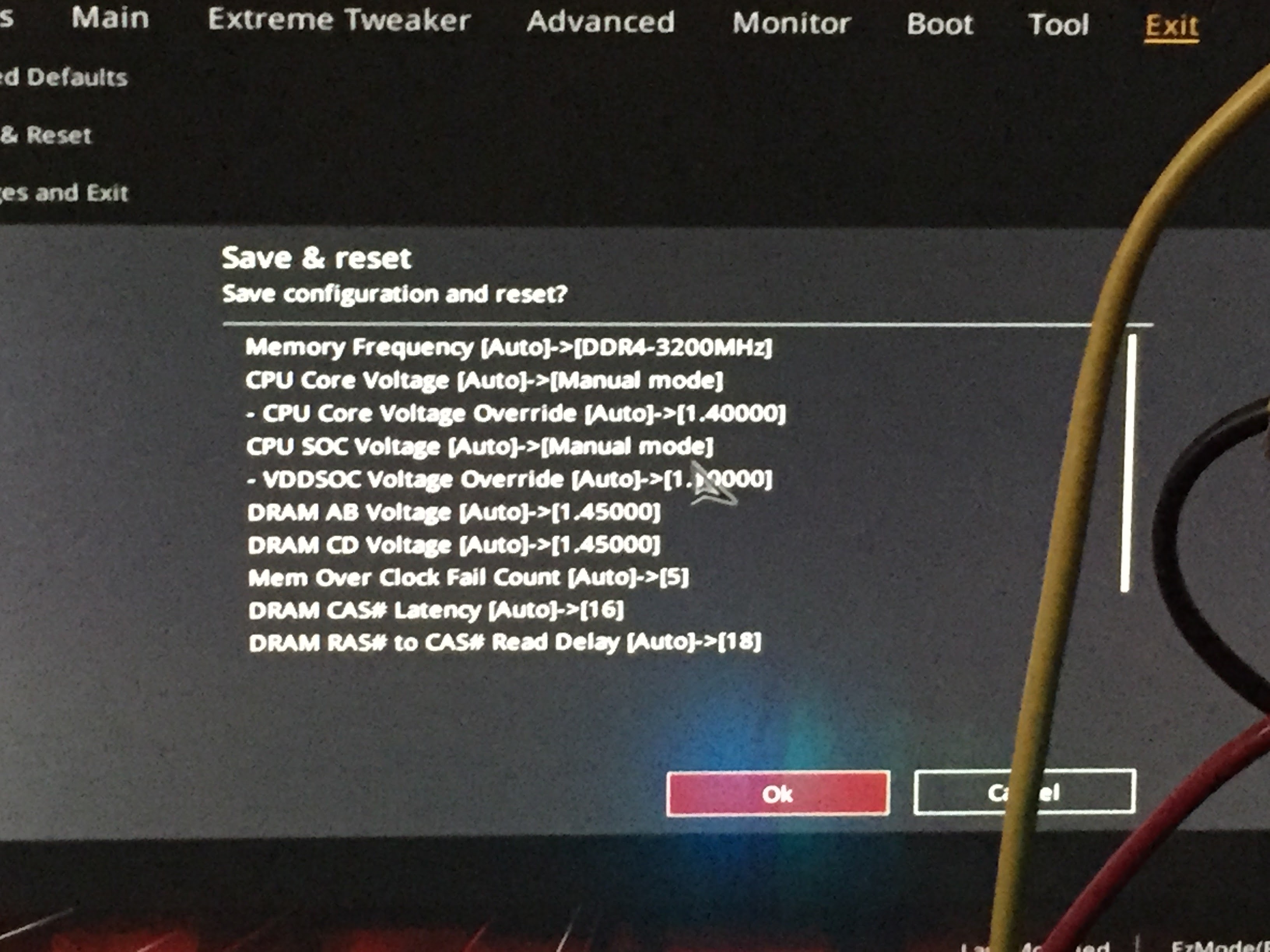 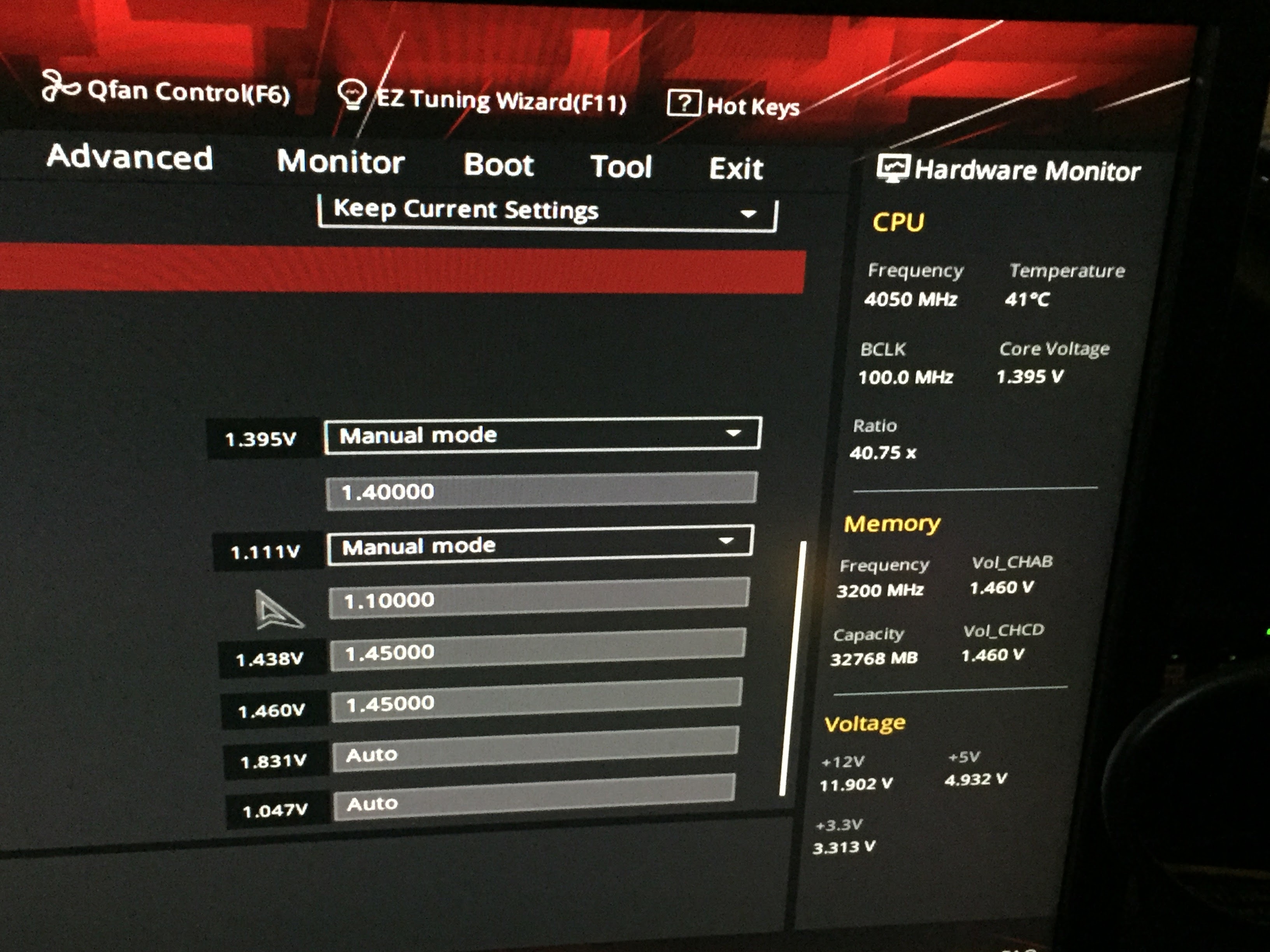 Today, I moved all the hardware into a second Corsair 570X Tempered Glass case, which isn’t meant to support E-ATX. There’s a wee-bit of flex on the mainboard PCB, and I haven’t fully tightened the screws on the very right side. The middle screw on the very-right side has also not been added. It’s mainly held but the same spots one would find on a normal ATX board, but with a few turns for the top/bottom E-ATX spots. I was way gentle here, as I didn’t want to fracture traces etc. 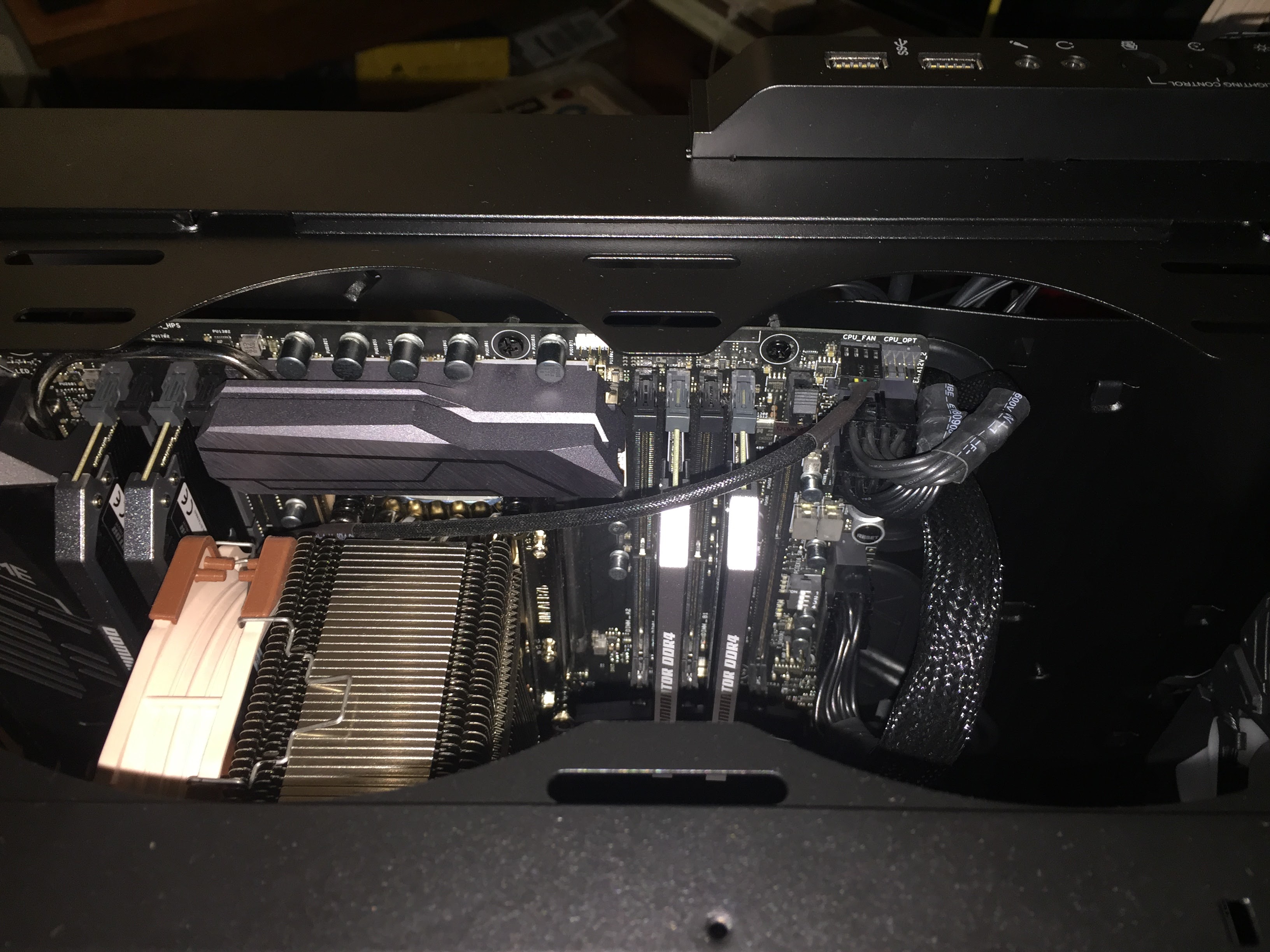 As you can imagine, that first boot was wee bit stressful. I either flexed it just right, or just blew $500+ Couple video-clips of quick-n-dirty reactions… that first POST haha, I was relieved for sure…

…and you’re all caught up now.

I’ve also shared IOMMU details of this board here.

Oh, a rather fabulous 4K 42.5" monitor from Dell arrived as well, which only got on my radar after a fantastic review by @wendell and the crew… 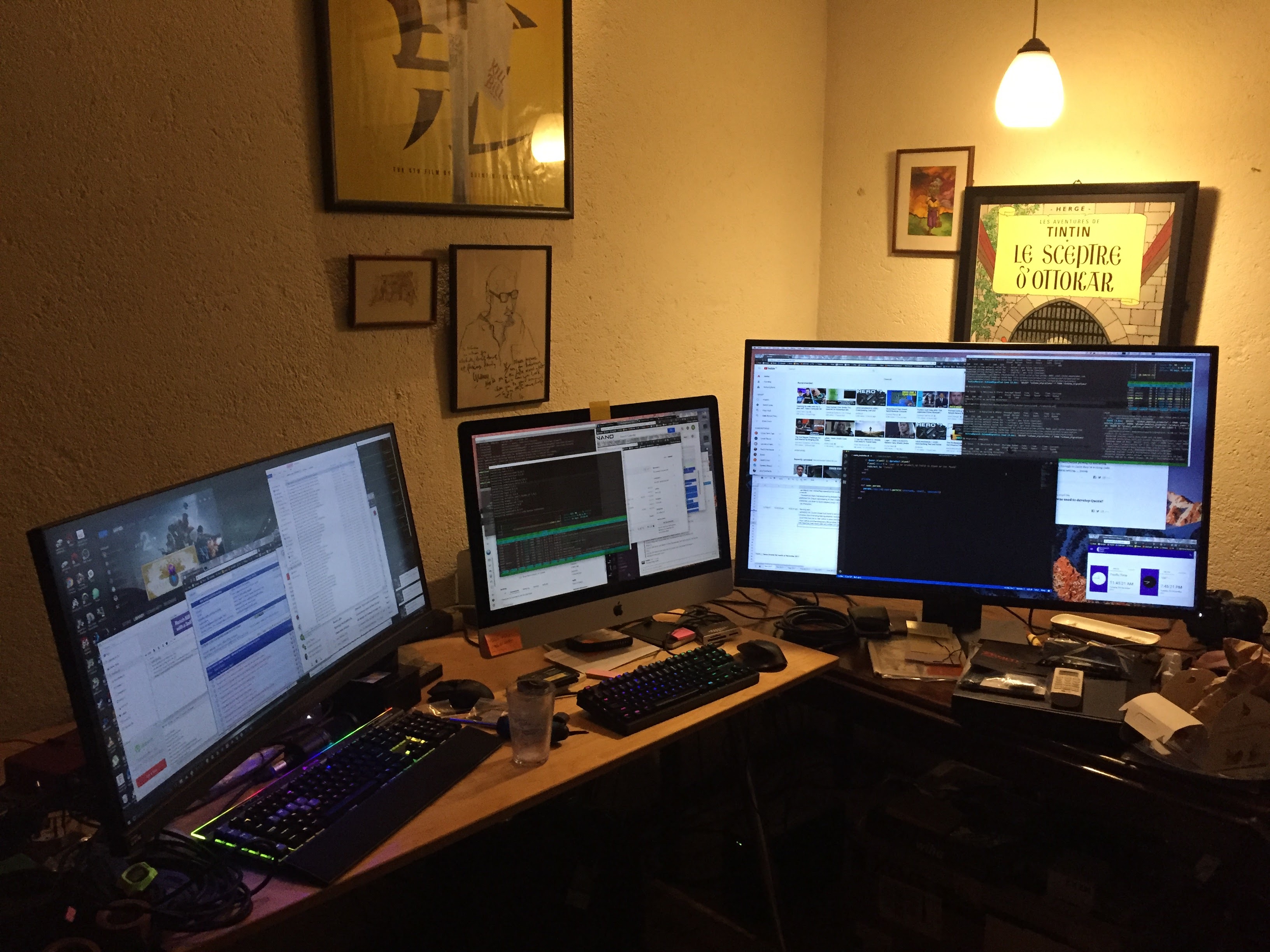 PS - What is Ryan’s forum handle and twitter? Same for Krista?

PS - What is Ryan’s forum handle and twitter? Same for Krista?

so my first task was to get a ‘smoke’ test (as I like to call it) done.

For some reason, every time I see you post a reference smoke test it makes me think you’re hoping for smoke.

I’ve resorted to using the 3rd (longer) PCIe slot as this is the only other 16x slot.

Even a 1080 Ti shouldn’t need 16 PCIe lanes. Your choice obviously, but x8 should be perfectly fine for to saturate the card.

Haha… think it goes back to my bench testing of electronics, just expecting a transistor or cap to pop…!!

Actually that’s a good point, but what’s worse - x16 slot vs covering that RGB ROG logo in the x8 slot

Oh, I’m sure. Plus, it’s exciting to frantically try to put the smoke back in.

Actually that’s a good point, but what’s worse - x16 slot vs covering that RGB ROG logo in the x8 slot

Disabled or auto is fine, if you enable it though it will not read temps correctly as it put somewhere around 20c offset, cooler. I enabled it and the MB reported my CPU temp to be 11c. I had an argument with a guy on the ROG forums that claimed his CPU temp was 18c with Enermax AIO, problem is his room temperature is 23c.

What you do want to disable is ‘core enhancement’. This will auto overclock your CPU to turbo speeds, 24/7. That in itself is not necessarily bad, but your voltages will be all over the place and too high. Much higher than needed. That will have a very adverse effect to anyone air cooling.

That BIOS does not contain the new Agesa update. You need 0501 or higher to get it. Only 0503 or 0701 on Asus website have it. You should be able to use DOCP for your ram then, thus lowering your ram voltage.

Appreciate the advice mate - I normally flash the UEFI first thing, but for whatever reason the Asus Easy Flash couldn’t get a DHCP ip (huh?) - I’ll do it the manual way on a USB…

Mine would not recognize being connected to the internet until OS installed.

Try OC 3.8 at circa 1.23250v. By manually setting it will stabilize clock speeds and voltages which in turn will stabilize heat. In real world and all my testing, 3.8 was the sweet spot. XFR causes heat spikes and OC all cores negates XFR benefit.

I hope you can get that stable. My confidence in Corsair ram is zero.

This was rather quick work, given that this wrote at almost 1 GB/s, which while it may be slow for the 960 PRO, remember its source SSD is not only the boot drive but also caps out ~550MB/s (read). 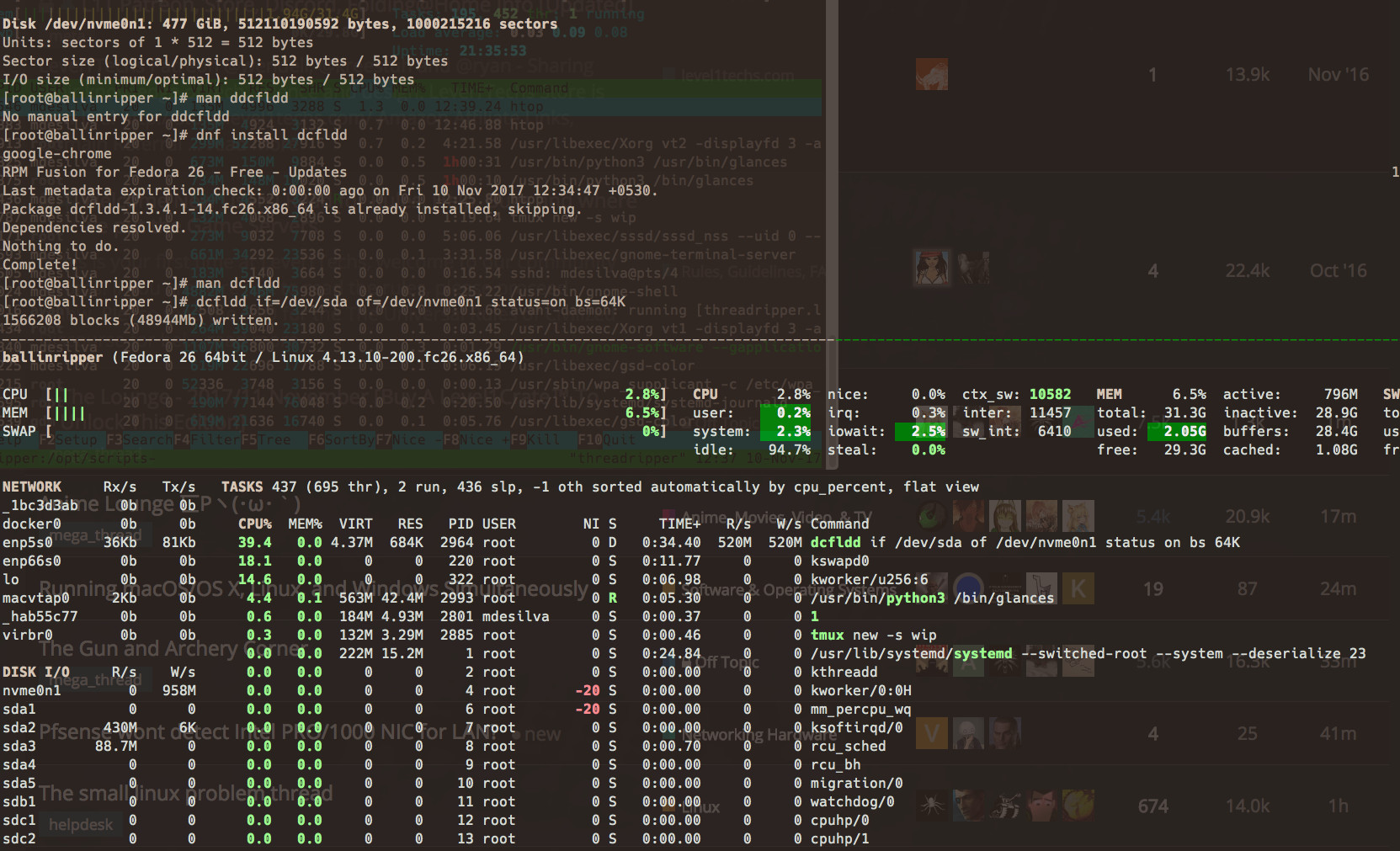 However, there’s a catch. I spent most of the evening today trying to figure out why the NVMe drive alone would screw up booting Fedora 26. And then it dawned on me… dracut was the missing sauce!.

I don’t know about you, but Dracut is my least favorite program on the planet. That program is completely unintelligible and doesn’t even work as documented on the wiki.

reasons I keep wanting to move back to arch…

What was even more surprising though was the amount of Googling I had to do to find how to fix moving from AHCI > NVME for Fedora… and yeah, it took a good evening of much trial-error.