Well, I don’t really have anyone to blame this time around. With potential 64vcores in my homelab, I’m pretty much done buying any new PCs for the next few years. 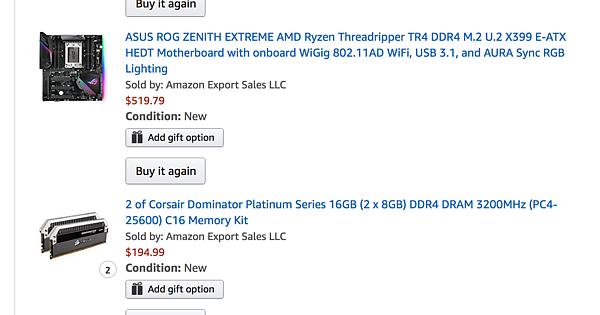 Think I’ve gone past that ‘dangerous hobby’ territory now… Kidding aside (and I do love to kid…) what finally pushed me over the choice of potentially having the second high-core/high-freq/HEDT rig was,

I plan to vlog the build of this rig in due course, should be fun!

Don’t be sad. I am having an amazingly unpowerful Athlon 760K stock.

Fair point. I have been oggling a TR4 build lately, but I just bought a car, so throwing down large sums of cash isn’t on the docket for the next couple of months. Hopefully something good happens for Black Friday.

Well, there have recently been a price drop, so 1950X will stay below 900$…
And if you don’t jump on the unnecessarily madly expensive ASUS brandwagon (if ASSus actually have features, that you really need disregard my hate) you shouldn’t really spend more than 1200 for CPU and board.

I’m waiting to see how the IOMMU looks (@bsodmike, Please report your results on this as I’m a potential buyer) before making a decision on motherboards.

But yeah, I’m almost definitely going to get a 1950X, unless AMD comes out and says the next series of TR chips will be available in Q1-Q2 2018.

Oh, one other thing: what cooling solution are you using for the TR systems and are you overclocking them? I’m aiming for a 3.8-4.0GHz TR system, so I’m almost guaranteed to need watercooling, but that’s acceptable, just interested to see some real world results from someone (hopefully) not using a custom loop.

Will deffo update you on my findings.

@psycho_666 Asus currently has the lowest return rate on the sadly notoriously high DOA rate thread-ripper socket, and are one of the few to have 10 gig Ethernet, USB-C and thunderbolt compatibility (with an optional card), so if you can live with E-ATX and provide good airflow (the heatsinks are not beastly) the listed board has all the expansion options you may use for external devices… that said I’m personally more a fan of the more basic cheaper boards, as less features often also means less to go wrong and less “enthusiast tax”.

@SgtAwesomesauce You may be surprised by the Noctua NH-U14s TR4 thread ripper only coolers, they are doing better than the normal block sized AIO’s (better than the 280mm x62 or even 360mm thermaltake RGB ring AIO’s). If you go one step further but not open loop, enermax makes a TR only AIO thats got basically an open loop style pump, which despite being only 240mm does amazingly well, only around +50c over ambient at 1.35v over-clocks, which will hit 4ghz on some chips. Moral of the story is coldplate design matters MASSIVELY on thread-ripper, vs the pretty minimal differences in temps consumer socket Intel and Ryzen CPU’s.

Going by the GN benchmarks on TR4 coolers, the 140mm Noctua is a very good choice.

TL;DR I will go custom-loop if I ever decide to in future, but won’t be sinking cash into AIOs ever again…

Aye, heard really good things of the Noctua, looking forward to seeing performance results; that said GamesNexus has covered this is detail - actually one of their newer videos as of this week.

Also their video on thermal paste application styles on TR4 is really interesting.

Whups… forgot to add one more item to that last order… 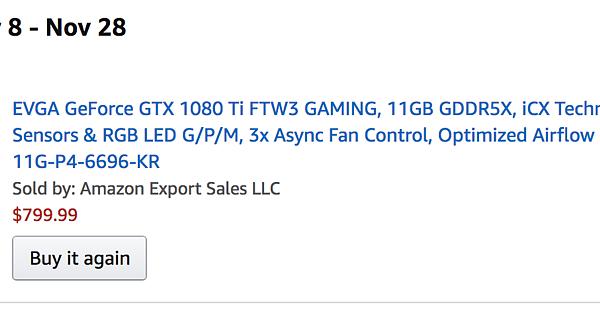 Open loop issues are sadly not lesscommon, and RMA times ect are not necessarily faster, though its worth noting most issues aren’t catastrophic leaks that destroy hardware as some may fear.

I have had to replace soft tubing and one fitting (alphacool compression, bad o-ring) off my test platform… nothing special but it was large downtime while the h90 and cheap 120mm tower coolers both run on completely issue and maintenance free after 4 and 3 years respectively of long daily use, and many instances of the PC being moved ect.

At the end of the day I’d be happy to sell an AIO to a client as a working office PC that they veiw as a magic black box so long as its been run a few days to get the worst of the DOA\manufacture fault type issues resolved. On the other hand I’d never sell an open loop to anybody who’s not an enthusiast… even if it had been my daily set up till then.

Also why a 1080ti? I get you like spending money, and its a great gaming card and all, but I don’t see how you can justify that for a home lab… its weaker in raw render power than several other combinations of equal cost, and doesn’t spread between virtual machines like more CPU or memory.

Also why a 1080ti? I get you like spending money

burn… guess I deserved that.

As you’ve figured out now, I have a couple pieces across various systems - the 1080Ti’s going into the gaming rig (a different box), and I’ll move a “lesser” card into the new TR4 rig.

Ultimately, I’ll need 2x GPUs in the TR4 rig for PCI-e pass-through. I haven’t planned that far ahead (yet).

TL;DR I will go custom-loop if I ever decide to in future

Custom loop is the way to go with Threadripper. OC at 3.8, 1.23125V and 27c at idle. Full load has never gone beyond 50c. Room ambient 21c. I would recommend a full cover block though and not EK’s moded verion.

Isn’t EK working on a full-cover?

Isn’t EK working on a full-cover?

I just meant a full socket cover for flow, not just base plate. If I am understanding you correctly, or are you meaning a monoblock - CPU as well as vrm?

If I am understanding you correctly, or are you meaning a monoblock - CPU as well as vrm?

Yep, that’s what I was referencing. I haven’t done custom loops since before Danger Den went out of business, so it’s been a while.

Dayum dude, that’s going to be a nice system!
And 10 gigabit network capability, just wow.
And to think home gigabit networks here in Brazil are stuff of dreams, mostly are restricted to office or enterprise use…