Following from my testing with Threadripper having built 2x 1950X rigs, and receiving a second X399 Zenith Extreme board from Amazon, just yesterday, I pulled the trigger on ordering an X299 Intel rig with an Intel Core i9-7920X Processor BX80673I97920X and ASUS ROG STRIX X299-E GAMING LGA2066 mainboard. 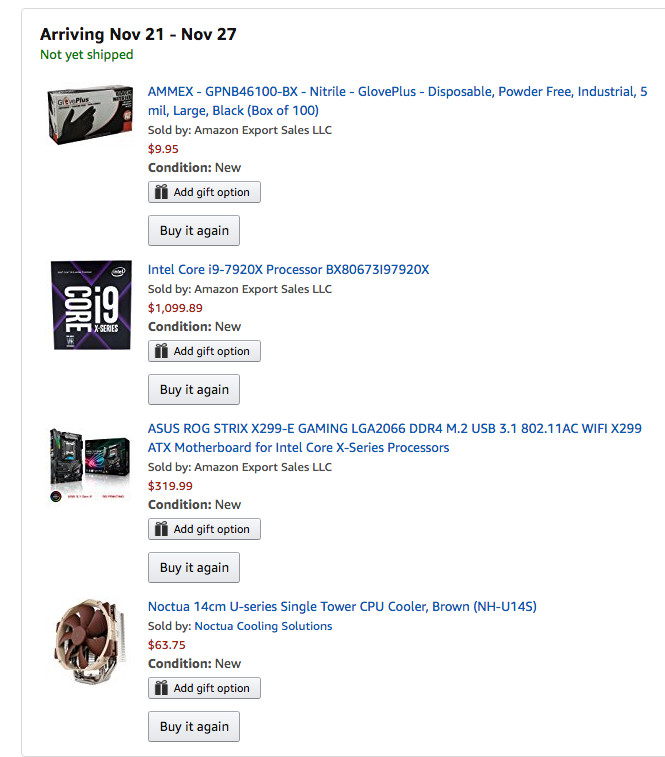 I’m quite pleased with the Threadripper 1950X / Zenith Extreme build — as a workstation I don’t mind ‘tinkering’ where needed. However, for something I typically need to rely on, I want to be able to have months of uptime without the constant need of babysitting and tinkering.

When trying to install XenServer on the first TR build, I ran into an error, which had more to do with the annoying use of a ‘Killer NIC’ by Gigabyte than anything else, but I saw this as an indication of potential painpoints to come.

Also, the issues surrounding GPU passthough etc on the TR platform needs more time to sort out - time beyond the expiration of Amazon’s return policies. Given the Gigabyte board is from September, granted I’ll have to sell this off, but I can still return 1x 1950X and the second Zenith Extreme board for a complete refund.

So my combo will be the “newer” 1950X/X399 Zenith Extreme build (as a workstation) and this 7920X/ROG Strix x299 for “Server” duties. Chances are, I’ll settle on a type-1 (bare metal) hypervisor and any future upgrades would most likely include an Intel 10G SFP card.

Another requirement that I plan to address in 2018 is a ZFS replication box, and even though this doesn’t have ECC RAM, I may consider just yoloing it, until I can burn some funds for a Xeon box at that time. It would be interesting to run FreeBSD/FreeNAS in a VM and PCI-pass through to an LSI card that I have (which has an ‘IT’ mode, that supposedly plays nicely with FreeNAS).

If anyone’s interested in grabbing either the first 1950X I got, or the Gigabyte X399 Aorus Gaming 7, please give me a shout. Once I’ve taken proper snaps, I’ll list these in the for-sale section in the coming week(s).

This year marks the return of choice to the HEDT market. Isn’t it great having a choice?

It is!! I may end up keeping the spare 1950X system and setup a second workstation. Oh so tempted

keeping the spare 1950X system and setup a second workstation

Keeping a 1950X system around for shits and giggles is goin to cause some envy around these here forums.

Having one makes me jealous!

That system has been performing fabulously well, and if it ain’t broke I usually don’t tinker much. Makes for a great excuse to justify dual 1950X rigs!

I’m in a head spin looking at current RAM pricing - the Ballistix Elite sticks only cost me $84 back in Aug-Nov 2016, and I see folks selling these for >$170 per 16GB kit on the 'bay. I really don’t want to buy anymore RAM until Samsung’s new stock hits the market and we see prices drop into 2018 Q1/Q2…

On the flip-side, there’ll be so many new models out in the next 5-years I’d be as jelly as you are now…

Wait are you actually in Sri Lanka? As shipping from there to most anyone else sounds like a huge pain.

Yes, I live in Colombo.

Not really, I ship via DHL and items reach the US within 2-3 days. Fully insured, trackable 24/7.

The only pain I have to endure is when receiving dutiable shipments, which now is far less given that Amazon’s Global Shipping is a DDP (duty paid) service. One hop from Cincinnati to East midlands (think Yorkshire) in UK, then a straight flight from London Heathrow - gets here in about 2 days (total) and is delivered to the door.

So what would the shipping cost? Any idea on total price + shipping? Newegg is going to have a black friday sale with it for $799, not that I’m exactly prepared to drop that much on a CPU, I think I’ll be waiting for Threadripper 2.

Yeah, I won’t be able to compete with NewEgg on shipping for sure. DHL is ~$80 to US/UK.