I know many people have been waiting for me to shed light on wifi communication theory but I feel an introduction is necessary. Let us begin with some simple emag theory.

See: Radio propagation theory
We know wi-fi is based on radio waves so let us start with those as the building blocks. Radio signals are transmitted by an antenna with a certain output signal strength or effect as it is called. In an ideal world only external interference would affect the signal, however, this is not true, more on this some other time as it is a different topic in communications. As the radio signal is spreading out from the antenna it becomes weaker and weaker the further away from the sender it gets. At some point, the signal strength is so weak that the signal can no longer be decoded by a receiver. This applies to longitudinal waves such as sound waves as well. You can demonstrate this easily in your yard.

Most people think of radio waves as this esoteric and exotic medium on which electronic data can be carried but what we do not see is exactly what we should be considering it is. Radio signals are just like light. They can be reflected, bounced and blocked. In a small installation it might not matter much if radio signals bounce around a bit, and sometimes it can even be beneficial, but other times it can be a bother for the communication.

Radio waves act much like regular waves in the ocean. If two waves meet up and their crests and troughs align then they will form a new much bigger wave. This is called constructive interference. Interference between two waves that create the same exact wave at a greater amplitude. However, in practice noise can make this a bit fuzzy without filtration

Definition:
Orthogonal - of or involving right angles; at right angles (you can google the rest and put 2 & 2 2gether XD 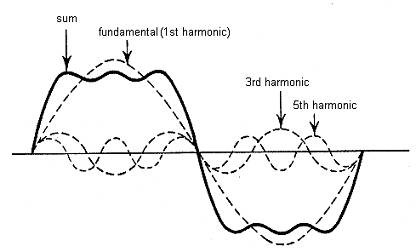 Say you just have a single radio transmitter the radio waves are spreading out in all directions and will bounce around the room. Basically, everything you see around you is something that radio waves can interact with by being reflected, diffracted or scattered.
In an ideal simplification, we can state that radio waves pass through softer materials easier and are reflected against harder surfaces or metallic surfaces resulting in the environment is filled with radio signals bouncing around in every which direction. This creates an ambient noise floor that we endeavor to filter out the best we can.

So whats the point? You will always get the strongest signal strength with the best signal quality (most important) if you have a free line of sight to the antennae of the Wi-Fi router. Anything that is blocking the signal will always affect it in some way. So remember this when you set it up. Higher up is always good but not too high, more on that later.

A radio antenna can have different appearances depending on what purpose it is designed to fulfill. Antennas also have a different length depending on what wavelength that they are made to transmit and receive radio waves on. Antennas especially some types like parabolic antennas need a proper alignment. Let us focus on the most common type of antenna for Wi-Fi routers and home networks is the dipole antenna which has an omnidirectional radiation pattern. Such an antenna will be more or less equally powerful in all directions, which is what you usually want in a home network environment. Manufacturers do end up defaulting to this to give the best all-around performance. If you have internal antennas to optimize the radiation pattern refer to your manual on how it should be placed. If they are external then you should arrange the antennas in the following manner

This always allows you to vary most devices antenna alignment so that the best propagation can always be grabbed by at least one transmitting antenna.

The radiation pattern of a typical dipole: 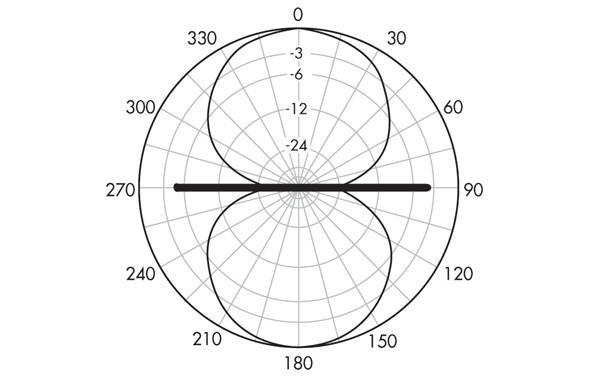 As you can see from the efield propagation pattern the dipole radiates best on its broadsides and rather poorly vertical hence the need for proper alignment.

I could go on for ages on this topic. Let us move onto radio channels and frequency.

A base station cannot transmit on the same radio channel or frequency range because they would interfere with each other. A channel is basically the frequency range in which all the power is broadcast inside of. We will expand on this later when we look at wifi channels. Ideally, you would only transmit on one frequency but power does bleed into the surround overlapping frequencies. This can be useful or detrimental at the same time. Once again more on that later. So this leads us to a real estate issue with a finite number of frequencies to transmit on without much interference.

So let us get to Wi-Fi itself. It operates in the unlicensed frequency bands of 2.4 GHz, 5 GHz, and 60 GHz. These are part of a greater set of bands allocated to ISM 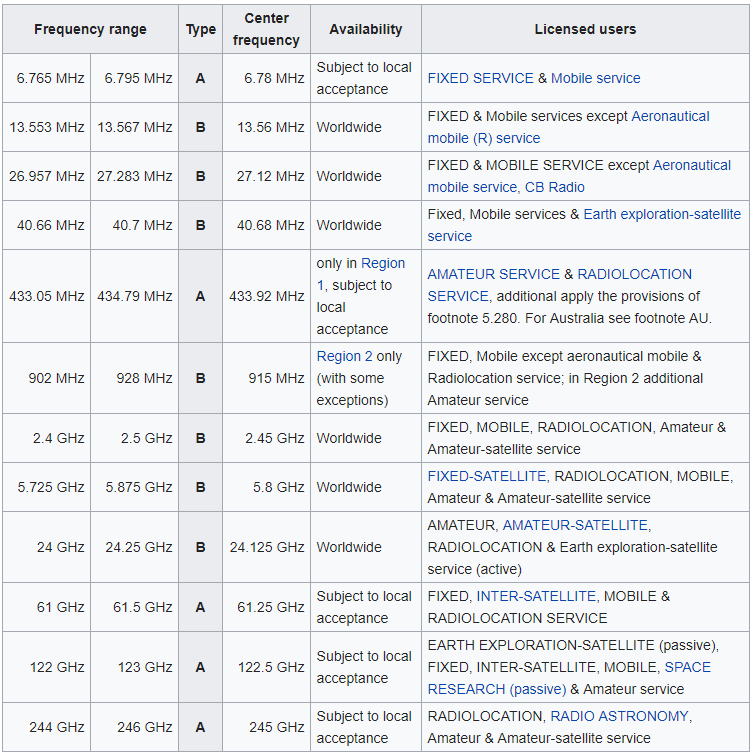 image.png753×755 33.7 KB
as you can see there are many such bands
Source: Wikipedia, I checked the data to make sure it was correct.

As you can see there is a metric boat ton of equipment that operates in 2.4 and now even 5 GHz. Thanks to waveguides, however, microwaves do not provide too much interference anymore unless you are in its immediate vicinity.

As you can see we have 4 non-overlapping channels however 14 has very stringent power restrictions so it is not used by most routers in the united states. The channels span 22 Mhz. Effective Isotropic Radiated Power (EIRP) is the amount of power that a theoretical isotropic antenna (omnidirectional) would emit to produce the peak power density observed in the direction of maximum antenna gain. This power or EIRP is broadcast into the neighboring overlapping frequencies.
Channel 1 overlaps 2-5
Channel 6 overlaps channels 2-10
Channel 11 overlaps channels 7-13

It is important you remain on these 3 channels. This is why 2.4 GHz is so congested. Routers can time and adjust to the noise floor to avoid other routers on an identical channel, however, interference still occurs despite the cooperation of the devices. Especially when extending channels for 802.11n and ac it is important the control frequency sits on one of these to avoid a ridiculous amount of interference for both systems. 5ghz was supposed to fix this issue of congestion however regulations in many countries including yours truly have limited the nearly 20 non-overlapping channels to a small number. With military taking out a swath of them unless you use the still poorly implemented dynamic frequency switching protocols. Modern routers and access points often have an automatic radio channel selection that they can and will use. They do this by listening in on the surrounding Wi-Fi environment to see which channels that seem to be taken already by other nearby equipment. Then they pick a channel that seems to be the least congested however in practice it’s better to just leave the system tied to one set of channels.

Further optimization of the channel can occur by choosing whether or not the secondary frequency is on the upper frequency or lower, to understand this further we need to understand channel width. We may utilize the following channel widths 20, 40, 80, 160. However, 160 is not very practical in my personal opinion. The higher the channel bandwidth the greater our modulation must be able to deal with the multitude of data more on this later in another post. Those wider channels will of course also take up more of the available frequency space. If you double the channel width of 2.4GHz Channel 1, then the resulting wider channel will overlap most other available channels, leaving you with only two non-overlapping channels – Channel 1 and Channel 11. So you see why 160 Mhz wide is inconvenient on a limited 5 GHz band. 80 Mhz is ideal in my personal opinion for most current applications.

So if your neighbor has a wifi network you can see (through the use of an analyzer app or spectrum analyzer) on a channel 11 with a secondary on 7 you must absolutely choose 1 and an upper secondary. However, if your neighbor sits on 6 and has chosen channel 10 or an upper then choosing 6 and using the lower would result in minimum interference for the both of you instead of using channel one with a secondary that would interfere with his control channel. I think you understand the jist of the message. Being meticulous is just fine if you know what you are doing. The same is applied on 5ghz though its simplified with 80 MHz you can usually just choose a center frequency and roll from there because there is an upper and lower. In the unlikely event that your 5ghz network airspace is congested select a lower if the other access point is in the middle and you are operating on the same three. The basic idea is keep the control channels from overlapping and if they have to overlap choose different non-overlapping secondaries if your router supports this of course.

So I think I have exhausted the introduction to wifi. There are many other topic expansions. Let me know where you want this to go folks. I can explain most things including modulation. I will spat out a list of stuff people might be interested in and perhaps I will see from the comments where I should go

whatever direction you want it to go. I can expand a ton into wifi but given my broad coverage why not answer what people want to know about. This is a community deal so it won’t be single person requests as much as crowd rule.

@psycho_666 @mutation666 @kewldude007 I know you guys wanted to hear more about stuff here is your chance. I apologize for being so hit and miss about it. I’m very busy nowadays

O god this reminds me of the worst 3 weeks of my life doing FCC frequency testing. God bless for those who do that for a living.

AHh come on it really isnt that bad haha

So there is a whole world beyond 27.185 mhz…did not know this

Any plans to delve into SDR? I know theres tons of information out there but a lot of it can and does go over my head.

Software Defined Radio is a very big topic. Perhaps Ill do a project on it and talk a bit about it or something. Its hard to just go from there

Yes that is essentially some antenna theory but thats a topic by itself. This was more of a brief overview with some insights but you make a good point… might be worth a decent right up on it… there seems to be at least a few people on the forum that would like such a thing