Western Digital has been running a deep discount on their 16TB NAS drives (WD Red Pro, Gold, etc.) I ordered 8 from the online store - direct from them.

What a nightmare - WD is now telling me they are filing a claim with UPS! Told them UPS had nothing to do with the problem - the drives weren’t properly packed to start. They are now thinking about what to do.

Have others had problems like this ordering from WD direct in the USA? Crazy… meanwhile the project is on hold cause we have no drives for the TrueNAS build I’ve been working on.

That sucks man. The last time I bought drives it was from a third party seller on amazon, and the state of the packaging seemed fine there. Sorry to hear you had such a problem.

If they don’t take care of it on their own, then I think you’d be fully within your rights to make a stink about it on social media, or turn to someone in the community like Steve at Gamers Nexus who might be interested in looking into something like this.

The absurdity continues… does anyone know a supervisor at WD? 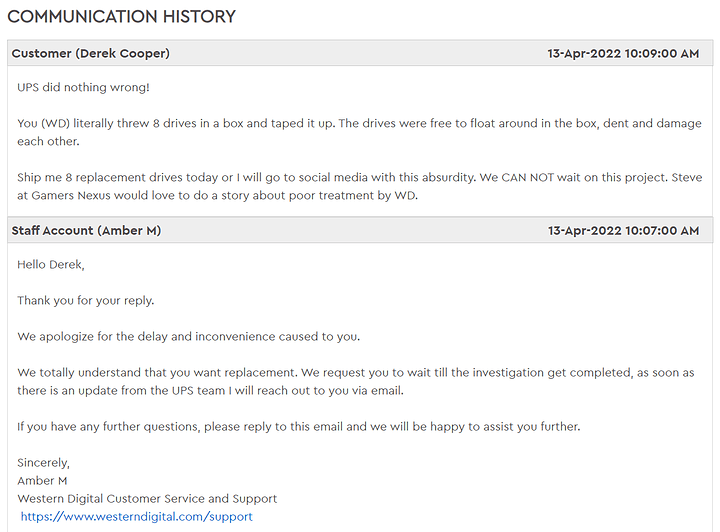 I guess I should have added that if you decide to go that way with it, then you probably shouldn’t be an asshat towards whatever CSR might be involved.

so this is going to sound a bit conspiracy theoryish, but hear me out.

probably those drives did not work when they were shipped to you to begin with. the crappy packaging was done on purpose, to aid in the possibility of there being ‘shipping damage.’ this allows the manufacturer to recover some of the cost via UPS claim, correct some inventory numbers by writing off some drives as ‘shipping damage’ VS ‘used for warranty’. All at the expense of only having to put off some customers a while.

this would not happen with a 2 drive order, but someone decided 8 drives is a large enough order to help out the book keeping issue.

Guess I’ll be the cynical + unpopular voice in this thread.

I’ve got no problem with people trying to get things fixed, but trying to threaten the level one customer service at an enterprise corporation of this scale with the I’ll tell Steve from GamersNexus™ line just comes across as petty and pathetic. It’s getting really tiring seeing people keep trying to pull this.

What would this accomplish other than you getting yourself added to a list of flagged customer accounts? There are tens of thousands of people that work for WD and OP probably ended up with a package that was unfortunately packed by the intern on a Friday night.

There’s no grand conspiracy by WD to deploy shitty packaging procedures company-wide here, just let them do their investigation and wait. Yeah it sucks that you drew the short straw but that’s life.

There’s no grand conspiracy by WD to deploy shitty packaging procedures company-wide here, just let them do their investigation and wait. Yeah it sucks that you drew the short straw but that’s life.

there actually might be, it has been done before.

From my experience in the past of being a shipper/receiver having WD file a claim with UPS is probably the correct way to go about it.

UPS can then inspect the packaging and go back to WD about whether the packaging was sufficient or not since it is their call to reimburse WD or not. ( I’m assuming WD chose to use UPS and that UPS and WD have a relationship.) You have the relationship with WD so that is what you need to concentrate on (getting reimbursed/getting your drives from WD)

However it sucks for you to be caught in the middle of it. Regardless I hope you get your drives.

That is the correct procedure, but is insulting if one sees not a shred of foam or bublewraps between the drives.

I agree with this. The company probably has a policy about package complaints. The fact they didn’t just send the OP to file a complaint with UPS is actually surprising…

All hard drives I’ve ordered from Newegg, eBay, and Amazon in bulk came in a box meant to hold multiple hard drives. All retail drives came in the retail packaging and packed inside another brown box.

UPS can then inspect the packaging and go back to WD about whether the packaging was sufficient or not since it is their call to reimburse WD or not.

This. Yeah it sucks, but it’s the same with our shipping + receiving here; WD will have a billable account with whichever carrier they use and both sides are already equipped to handle this sort of interaction. You can get your replacement and they will fight it out amongst themselves who ends up footing the bill for it.

If you paid with a credit card that has purchase protections clauses, you can probably get some luck sorting things out on that end.

I hear what everyone is saying, but pretty much all the other companies I deal with say immediately, “So sorry to hear of the problems - I have sent another 8 drives out today via next day delivery while we sort out the problem with UPS.” Making me hostage only worsens the experience. Know what I mean jelly-bean?

Newegg, eBay, and Amazon in bulk came in a box meant to hold multiple hard drives.

100% Whoever packed my shipment was having a bad day…

Had a great chat with Diego, supervisor at WD.

I walked him through what was happening - while we were on the telephone UPS showed up with a damage call tag pickup. I carefully packed up all the drives properly and off they go back to the WD mothership.

Diego agreed to a refund and offered me 15% coupons which could be applied in addition to existing discounts. By the time I ordered 8 more drives, the RED PROs were no longer available even on back-order so picked up WD GOLDs which are also great - assuming they are properly shipped. Unfortunately, they are on BO till end of April.

Thanks for all the feedback gang. Project is on hold for a while apparently.

That is the correct procedure, but is insulting if one sees not a shred of foam or bublewraps between the drives.

Not necessarily needed. Last time I ordered Red drives direct from WD they were individually packaged in single drive boxes and those were packed into a larger box.

Inside those single drive boxes the drives were suspended via plastic holders that would likely flex due and absorb any shock. All the drives were working without issue and no foam/bubblewrap necessary.

Bonus is that they are easily reusable if the drives had needed to be sent back or packaged up for a move.

Thats not a bad method, HPE uses that.

Even scrunched up / shredded paper padding would be better than just drives in anti static rattling around loose in a box.

And WD Can cut out the transport company from their claim procedure if they liked, but presumably the volume of failures they have caused in this one wave, they might be hoping to reduce the payouts by keeping the extra layer of hassle

Yeah, the last time I bought drives they were packaged like that. I kept the boxes and their little plastic holders so I could use them when selling the old drives.