Hello everyone, I decided to write this guide which is an amalgamation of all the solutions found on this post by Wendell:
Post

Disclaimer:
This guide is based on my personal experience on 2 TrueNAS systems, follow at your own discretion. I will try to help if I can, and update this guide if I missed something.

Thanks:
I want to thank the following people:
@wendell for the original guide, and for his help with everything.
A user by the name of Jip-Hop on GitHub, who wrote the guide on how to connect the bridge to avoid VMs not having internet access. And created the original script.
A user by the name of tprelog on GitHub for adapting the Script.
@talung for showing me that the basic Kubernetes implementation is flawed and not efficient, and changes to the script. (See comments)

Basic issues:
The first issue this aims to solve, is the fact that TrueNAS Scale uses k3s to run its apps, and that’s both not very performant and not usable for most of us with just one NAS.

The second issue is that VMs on TrueNAS do not see the host, and Wendell showed in his video a solution that is working, but interferes with the solution to the first issue.

The overhead description:
The solution will look like so:
1. Native Docker and Docker Compose
2. Portainer to manage all other Dockers easily
3. Optional settings and recommendations
4. Virtual bridge to allow VMs to see TrueNAS host shares

First off, if you have dockers and apps in TrueNAS, be sure to take note of their volumes and docker-compose file if relevant, as you’ll have to recreate them.

Stage 1—Create the Data set:
This is obvious, but it has some pitfalls that some new users to TrueNAS and Linux in general might not be aware of.
We’ll need to create a Dataset in the pool you use for operations, and not just cold storage. So if you have a SSD pool or a more powerful pool that is dedicated to operations, you’ll choose that one.
In order to do that, in TrueNAS go to Storage and find the pool you will be using.

Now you’ll see the creation screen, give it a name, and nothing else. It’s Critical that you don’t change the share setting to SMB, but instead leave it as Generic. SMB breaks chmod, which is crucial for dockers.

Now that you have the Dataset, we’ll prepare the groundwork for the move to docker.

Stage 2—Making Sure everything is ready for Docker
First thing’s first, we’ll have to make sure the physical interface has an IP address, and that you can reach TrueNAS on that IP. We do not want to be stuck out of TrueNAS and have to physically do these things on the server.
So go to Networks > Locate the active physical connection, and click on it.
Now, make sure DHCP is off, and add an alias in the following format:
192.168.0.2/24
where 192.168.0.2 is the IP TrueNAS is responding to and shows the web portal on.
Test and Save the settings, make sure nothing broke, and continue to delete the br interface.

I’ll start off by clearing up things for people who used or set something in the TrueNAS apps, or tried Wendell’s solution with the Bridge. If you are starting from a fresh TrueNAS, skip ahead.

We’ll have to go to TrueNAS > Apps and stop and remove every app that you may have created. Once that’s done, we’ll go to:

image968×173 15.3 KB
and click on Advanced Settings, there we’ll make sure the IP is not set to a bridge, but to the physical Interface.

Once that’s done, go back to Settings from the image and click on Unset Pool. Give it time, and when it’s done we can move to stage 3.

Stage 3—Getting Docker to run Natively
We’ll create a file somewhere that’s accessible to you, if you want you can do it from TrueNAS shell or from a share.
Go here: Use docker-compose on TrueNAS SCALE without Kubernetes · GitHub
and copy the script.
Create the file, let’s call it enable-docker.sh, on your TrueNAS. Edit line 20 to point to the Dataset you created in stage 1, and run the script.
If you run into issues with it saying something about the bash not being recognized, remove " env" from the first line in the script.

If all goes well, you should be able to check systemctl status docker.service to see that it’s working.

When you’re done, go to System Settings > Advanced > Init/Shutdown Scripts. There choose Script instead of Command, point to the script you just created, give it a name, and tell it to run Post Init.

Now you’re set from the Docker side of things, you could use docker and docker compose commands freely. However, if you wish to do this with Portainer and have a few extra things, please continue reading.

Stage 4—Optional Upgrades
I personally am not a fan of being limited to the version of docker and docker compose that comes with TrueNAS, so I updated all of those, and I’ll describe how:

Stage 5 - Portainer
Now that we have docker compose (or docker-compose if you did not use Stage 4) we can create Portainer.
Create a docker-compose.yml somewhere in your pool, and paste this inside:

You should have access to Portainer now on port 9443 of the IP you set for TrueNAS.

Stage 5a—Optional things in Portainer
In Portainer, I have a few things that I prefer to set for ease of use and maintenance.

In Virtualization edit your VM and add another NIC to it, by clicking on the VM you want, Devices > Add. In this NIC, it’s important that you choose to attach to br0, then save.

Save, and it should go there directly from now on.

That’s it, I hope this helps you, and saves you the time I had to put into these issues.

Just a correction, I did not write the script. Original script was by Jip-Hop on Github and then adapted by tprelog. I used tprelog’s version and posted minor changes and information in the other thread.

Can you please correct the post. I deserve no credit for this.
Thanks
Talung

OK thanks for the correction, could you post the changes you made and explain what they change, so I could add it to the Guide?

Essentially it was just adding the nvidia passthrough on the daemon.json file. It is in the Github comments.

But I believe the script has gone through a number of revisions since I first started using it and am running an older version of it. It works so haven’t felt the need to update.

OK, great! It’s important to have these here in case someone needs them.
I now have to figure out how to deal DHCP on that bridge, and with importing a Postgres db from a snapshot for one docker that got wiped when I transferred.

I hope this guide will help people, and save them the trouble I went through on 2 systems to get to this state.

Thank you Scepterus. I have some questions though.

In Wendell’s other thread you refer to, we are using and managing Docker containers inside the VM.

Here we have a VM, but we are using Docker natively on TrueNAS and optionally updating it with apt enabled, correct?

I ran into an issue where I wanted to utilize Intel Quick Sync within my VM within a Docker container and that doesn’t seem possible, but does here.

What is the purpose of the VM?

How do you manage your Docker containers, data, config, yaml files on here for backup as well as ensuring they survive TrueNAS updates? Do you have a script? Do you rsync the entire folder with the data? Snapshots? All 3?

Firstly, you’re welcome.
Secondly, I’ll answer your question in the order you asked them.

I hope I answered all your questions, if not feel free to ask, so they may help others that come here.

So I recreated my Jellyfin instance in native Docker… but I am getting permission denied with my library…
I’m confused what I should be running my environment as PUID PGID
or should I create a new data pool for docker containers running natively? 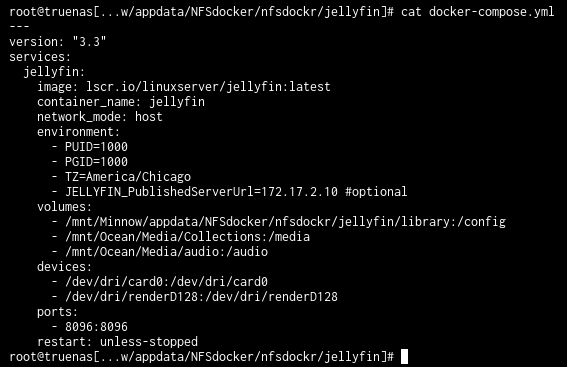 Is it under a dataset with SMB share? Even if not, is the share type on that dataset set to SMB instead of generic? That was mostly the reason I ran into permission denied.

Like I said in the guide, you need a specific dataset just for Docker, it can’t be on an already existing one without some issues.

There’s an update coming to TrueNAS that will bring big performance gains to dockers, but it will probably necessitate a recreation of the docker dataset after the update.

I created a new user “jellyfin” and a group “media” that I pass to the docker container using command line parameter -u <uid>:<gid> .
You add yourself/wife/kids to the group media (usermod -aG media jode ) and change owner/group of the files that jellyfin is servicing.
chown -R jellyfin.media /opt/media
To make sure that future files have the right permissions and ownership when added to your media folder you set sticky bits to the folders.
chmod 6775 /opt media

I would add for anyone who has first tried using the any SCALE apps or TrueCharts - Be sure you Unset Pool to disable and prevent k3s from restarting after you reboot. The enable-docker script (by design) will not work if k3s is enabled and/or running. I mention that because it has already confused a few people and they thought the script was not working.

I would also point out with Stage 4—Optional Upgrades that upgrades and any extra packages you might install on the host will be lost with every TrueNAS upgrade.

Be sure you Unset Pool to disable and prevent k3s

Once that’s done, go back to Settings from the image and click on Unset Pool. Give it time, and when it’s done we can move to stage 3.

It’s there, if you want I could take the screen shot you uploaded and add it to that section.

I would also point out with Stage 4—Optional Upgrades that upgrades and any extra packages you might install on the host will be lost with every TrueNAS upgrade.

That’s why I wrote the guide in a way that uses portainer and docker compose, that way you’ll only lose the container, but the volumes with the docker data are persistent on the share. So after an upgrade, you just bring up portainer, and recreate the stacks if needed. And you’re up and running and lost nothing but a bit of time.