HAA: Hardware Addicts Anonymous (Lots of builds...Chasing Ever Cooler and or Ever Smaller) Build Logs

So next we have the livingroom gaming solution. I had taken what I have learned from previous ITX builds, and knew roughly how much performance I wanted for gaming in the livingroom. I wanted either 1080p with sustained 60fps (TV does not have Variable Refresh Rate VRR like the one in my office with the 2080Ti), or 4k gaming with maybe some slightl…

Here was my solution on both the Phanteks Shift and Shift X before they made the mesh and now the second iteration with better vetilation.

I could go on for hours about builds that are smaller vs heat and performance vs sound.

Yep similar to my mod, although I removed the SSD tray completely and waterjet cut a fan mount/hole on the back plate with a mounted a 120mm fan to pull the air the top fan was pumping in, I was considering the taller X model but it felt too tall for the space it would sit. 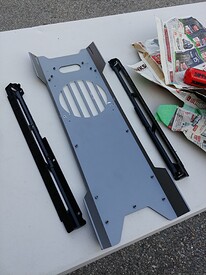 Which number driving test was sucessful?

Obviously one might have taken 3 attempts to pass on car, then passed bike first time, and choose either 1 or handful

Failed my first one because I was reverse parking and a cyclist went around me, I was fully stopped and I saw him but the teacher said I failed because I didn’t, its pretty well known at least where I live where they just fail you no matter what to get more money which is sad.

Robots will make most of our human jerbz obsolete.
But, to whom Will they belong?

My boss reckons we can each buy a proxie. I reckon we gonna mostly be pushed to basic.

And by job, I mean the vast majority of office jobs, a huge percent of manual labour, and most of transport.
I presume a few inventors might keep their jobs, until machines can invent stuff.
Robot art is shit, so human artists will reign too… (Biased much‽)

Transport will be the first one to go, manual labour in very simple tasks will rise (with wages plummeting), then collapse of global economy.

the first one to go,

I suspect you are a little off…

Computers already cut down on call centre jobs, with increased automated phone systems.
Super markets lost a high percentage of basic staff with self check-outs. Floppy is a while away, despite White Castle, but it does actually exist and is (kinda) in use

For decades the automotive production lines have been automated, with more and more factories being automated.

Trucks are not even out of beta, let alone boats which I thought would be easier.

So I think you missed a bunch that is already a reality, and focussed in a publicity stunt that might take a while, and even then might be constrained to back haul/ long distance

(But, just my opinion)

We should move this to a dedicated topic.

I’ve been using Mealime to plan my meals. It gives you recipes and a shopping list based on what you choose and how many servings, so it takes all the thinking out of the process.

Still grab fast food once or twice a week, but for the most part stick to what I buy at the store.