Please see the product page and the thread here on L1T if you want more details on what the Pinebook Pro is and what it represents. And special thanks to @Luke_PINE64 and the rest of Pine64 and the community for conceiving this! (Not an ad BTW, I paid for my Pinebook Pro with my own money and am writing this review on my own volition.)

The laptop feels outstanding for its $200 price tag, it honestly feels as good or better than my HP Envy x360. The body is made of a magnesium alloy and is quite rigid. The screen, which is normally the most flexible part of the body, feels rigid and strong. The underside of the chassis is also held in with just some small phillips head screws, so servicability should be pretty easy. 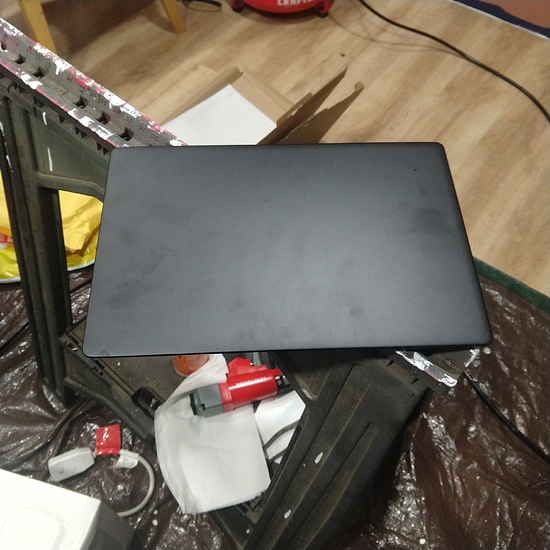 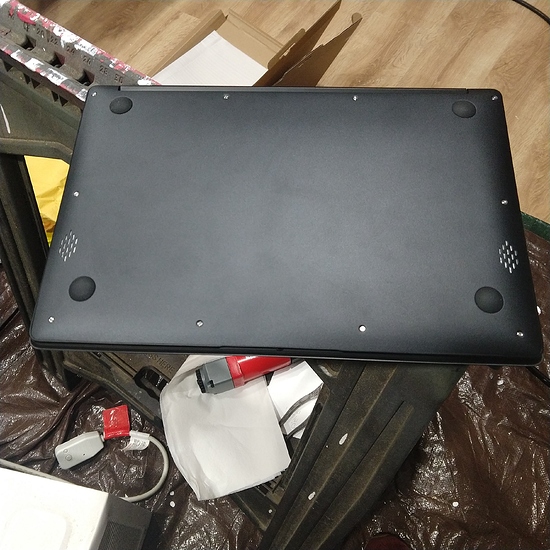 Speaking of screen, I can’t fault the 1080p IPS screen either. Mine has no dead or stuck pixels, nor is the IPS glow too bad. The whites seem to be a bit cool, and the colors slightly muted, but that’s comparing it to IPS displays that cost well more than the entire device. As best I can tell it is connected via eDP, so in theory a user could swap it out with another screen if desired.

The keyboard is fine, it’s not the worst feeling keyboard I’ve ever felt, nor is it the greatest. Overall it gets the job done. Mine did come with an ISO layout physically, but ANSI logically which messed me up at first, but even as I’m typing this review up I’m getting used to the layout. ANSI is coming down the pipeline from what I hear. I honestly could have picked ISO by accident, it wouldn’t surprise me.

It is mostly personal, but I find the trackpad to be my first real complaint. I loathe textured trackpads to get that out of the way. I am also running into an issue where sometimes when I go to click the cursor shoots down and left. It may be because I move the pointer with my middle finger and click with my index finger and the trackpad misreading it. Luke at Pine64 says there is a firmware fix coming for the trackpad soon™. 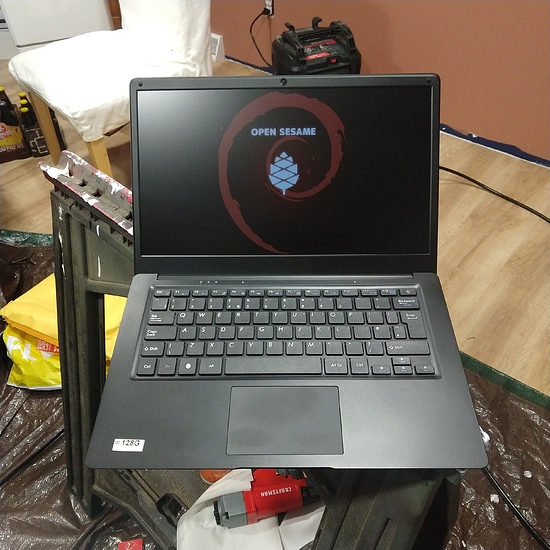 Speakers are meh, but so are just about all laptop speakers. They are mounted on the bottom which I find kind of odd, but if somebody cares about audio quality they shouldn’t really be looking at integrated laptop speakers anyways. The audio from the headphone jack seems normal for lack of better words.

Ports are pretty normal. On the left side of the chassis is the power jack, a USB A, and USB C (with video!). The right is another USB A, headphone/mic/UART jack, and a microSD slot.

I feel pretty dumb because almost all issues I had with software was solved by logging into the ‘rock’ account and not the ‘root’ account. 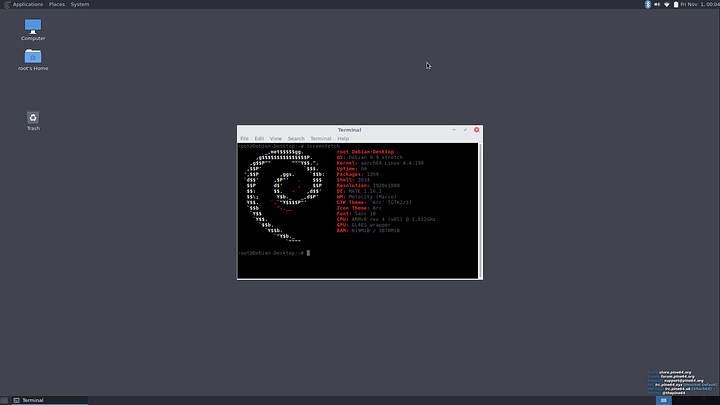 People will be glad to know that Debian on the Pinebook Pro is, well, Debian. It looks like Debian, feels like Debian, it might even smell and taste like Debian. I was honestly expecting a dumpster fire because of Arm still being as niche as it is, but honestly I haven’t noticed a difference for the most part. From my limited testing it appears that some programs won’t work because it is Arm, but others work just fine. My one gripe right now is that the Chromium settings crashes every time without fail. The rest of Chromium doesn’t have a problem, and even Chrome extensions work.

Other distros are available too, like Chromium OS and Android. Rumor is Manjaro is coming soon too. The default is Debian Mate. I’ve already swapped to XFCE because I like it better. I’m currently waiting on a microSD card to test other distros. 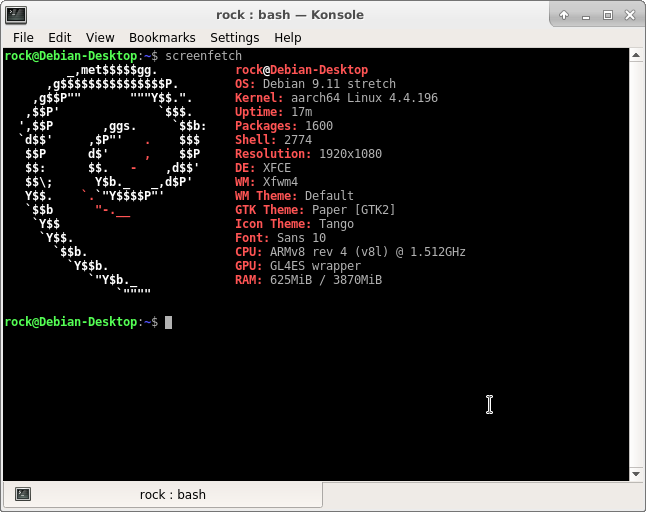 You get plenty good performance without being charged an Arm and a leg. Get it? Arm and a leg? I’ll show myself out.

But for real though, the Pinebook Pro is plenty adequate for “normal” usage. I can browse the internet, play some videos, write a word document, and edit basic spreadsheets without issue. If you are a power user you will most likely run out of the 4 GB of RAM, but the 2+4 big.LITTLE architecture can handle a surprising amount. The architecture is also great on power, I haven’t tested the battery life extensively but I got a good 6 hours when I was first testing it out and still had plenty of juice left.

Storage might seem a little bizarre to some people at first. To start it comes with eMMC that is upgradeable, a microSD slot, and can use NVMe drives with an adapter. Out of the box it boots from its eMMC, but it can also boot from the microSD slot. As best I can tell it can’t boot from USB or NVMe without some tweaking.

For $200 this thing is a steal. Build quality is good, specs are fine, and software is like 90% of the way there. I’ll be honest that I was a bit nervous going into this because 1. Arm, 2. Cost, and 3. Timeframe, but Rock64 has delivered a pretty solid product. With a couple kinks worked out (and Windows lol) I think even my parents would be pleased with it.

I intend to get one but I am going to wait just a little bit. There have already been some small revisions with only two shipments. best guess is that by the middle of next year everything that can be sorted will be and as a result I hope to get a better experience.

It’s the other two products they have in the pipe line that excite me more. The Pinephone is very high on my wish list and as a former Pebble owner I’m really looking forward to the Pine watch.

There is a Pine tablet coming some time next year I think. With all of these products your digital life could be contained within the Pine hardware ecosystem. A very strange thought indeed, who would have thought that a small company of enthusiasts could achieve so much so quickly.

They are certainly gaining a lot of mind share with the Linux, opensourse and maker communities.

If the build quality of the upcoming devices are on par with the new laptop I think they will be good devices.

It would be pretty awesome to have a full set of devices that come from a group of enthusiasts who build for the community.

From what I have read the phone is a little experimental. If you remember the first Pinebook, A very interesting product but not without its issues, Now we have the Pinebook Pro a much more polished device. Well I think we can expect something similar with the phone. Don’t expect miracles from a $150 device. Hardware wise I think you can expect budget from a couple of years ago. It’s the software, particularly the OS that is going to be interesting. This first gen phone will be enthusiasts devises much like the first laptop. You could give the Pro to anyone and they would be happy, may we have to wait for the second phone to get a similar experience.

This first gen phone will be enthusiasts devises much like the first laptop.

Exactly. That’s why i like them going with a low price and “cheapish” construction much more than the 600$ librem 5. Software is sub-par in both cases. And as a “play with it” and dev device, the pinephone is a much better option.

Thank you for the fair and accurate review! Well written up too

and yes, the trackpad fw fix is incoming - I hope that by mid-next-week we’ll have it out there and tested by ~10-20 people. If they OK it, then we’ll just push it.

I’m willing to give the Pinephone a go myself. I’m borderline use case for a smartphone anyhow. I keep on looking at old school feature phones with an envious eye. So lack of functionality and my list of “must have” apps is very short. If it wasn’t for Google Authenticator I’m not sure I would need a smartphone at all. I have 2step setup on many things. I would need to find an alternative of just keep an Android phone just for that.

@Luke_PINE64 thanks for contributing, it’s things like this that keep us happy.

If it wasn’t for Google Authenticator I’m not sure I would need a smartphone at all. I have 2step setup on many things. I would need to find an alternative of just keep an Android phone just for that.

There’s always https://authenticator.cc/. Its an open source authenticator extension available for Chrome, Firefox, and Edge which you should be able to run on any computer even the Pinebook.

Source is on github too 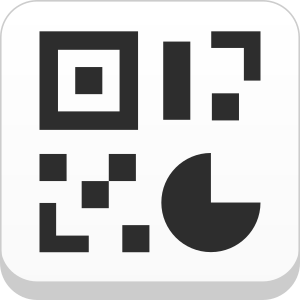 The Chromium crashing when you open settings - that’s because of the additional flags (for widevine and so on). Try starting it from terminal and make your adjustments.

The Debian that comes preinstalled has a lot of effort put into it and it shows!
I haven’t played much with Ubuntu or ChromiumOS - too many things to explore.

Manjaro is in Preview 4 as of time of writing. No Netflix or Amazon Prime on it (just yet -will be trying out a few things soon). That’s because there is no widevine for aarch64 so any solution would need some trickery. KDE, Wayfire and Sway are ridiculous with Panfrost - kde’s gles acceleration could land with the next Preview.

You can use USB-C for charging as well. Ymmv for how fast it will charge (some issues with negotiating writhe charger - being worked on/ instigated atm).