If you haven’t read the first part of this odyssey, please read here.

So I’ve been using the Pinebook Pro for approximately six months now, so it’s time for an update!

First and foremost I made the switch to Manjaro and I don’t regret it for a second. I’ve had a preference for Manjaro and other Arch-based distros ever since I first tried Manjaro a few years ago. BSD isn’t my jam for whatever reason.

Anyways, Manjaro has been nearly flawless. It installed without a hitch, and the normal Manjaro stuff is there. It feels and acts almost exactly how it would on an x86 device, so if anybody already knows Manjaro they could jump in with minimal issue. The normal terminal commands I use (e.g. $ pacman -Syu for updates) work as they should as well. 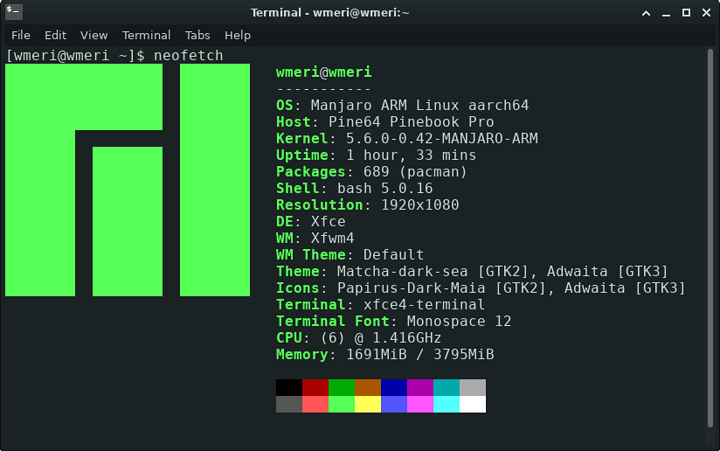 There are some funky software things I’ve run into. For example, I got KiCad to work with zero troubleshooting, but I can’t get Discord working for some unknown reason. Not sure why. Aside from that I’ve used Libre Office, GIMP, and VLC with success. No weird settings menu crash in Chromium either

Well, to be honest, my opinion hasn’t changed much since my initial impressions. It’s surprisingly solid for how cheap it was, the screen is perfectly fine, keyboard is functional, and the trackpad is iffy.

I’ve totally dropped this off my couch at least once and it’s suffered no damage. I’ve also tossed it on my bed a few times with no negative results. The only thing that has happened was one of the speakers popped out when I was opening up the laptop for the first time, which easily could have been my fault. The speakers are just glued in as best I can tell, so I simply pushed it back into place and it was back to normal. 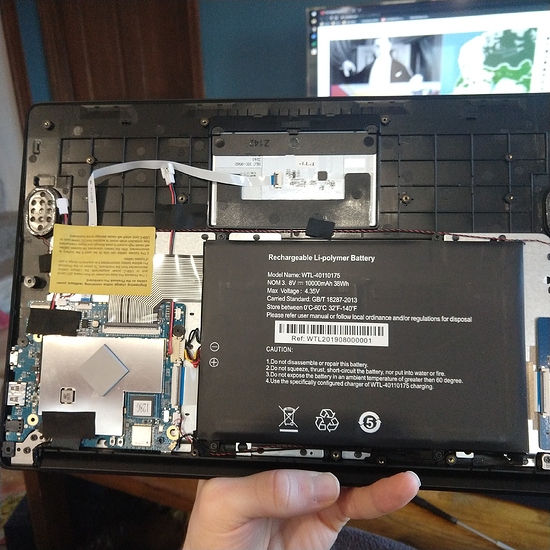 The screen I can tell isn’t a super high grade fancy panel, but it’s a hell of a lot better than many TN panels I have used in the past. Colors are meh compared to my nice 27” 1440p 144 Hz IPS HDR blah blah blah monitor, but that monitor also cost a lot more than the Pinebook Pro. The PBP is also definitely IPS as there is minimal/no color shift when viewing at an angle, which is nice.

There are still some issues I’m havng with the trackpad occassionaly. For one it’s not the most precise trackpad out there, so detailed work with it ain’t going to happen. The most annoying part is that it will occassionally shoot to the very bottom left corner of the screen when clicked while a second finger is still on the trackpad. I keep the whisker menu button there so no real big deal, but it is annoying. Supposedly this has been mitigated with a firmware patch, but I’ve been too lazy to check if I have it.

I love that it can charge via the USB-C port, now I only need one charger for two devices!

Yeah, this guy isn’t going to be winning many races.

I say that, but remember that the RK3399 is basically a cellphone processor, right about in line with a Galaxy S6 according to Geekbench. The RK3399 wasn’t released all that long after the S6 either, having been announced in 2016.

This device can handle a 1080p60 video stream just fine, and I suspect it could do at least 4K60 as well. It certainly isn’t a gaming machine by any stretch of the meaning, but for straight content comsumption it works well. No Netflix, but that’s actually a Google problem (Widevine).

A saving grace for the device is how light Linux is compared to Windows. If I used a device with 4 GB of RAM with Windows 10 I’d cry, but in Linux I can run a few browser tabs, a word doc, and a couple other things and still not max it out. W10 would idle with like half the RAM I use. 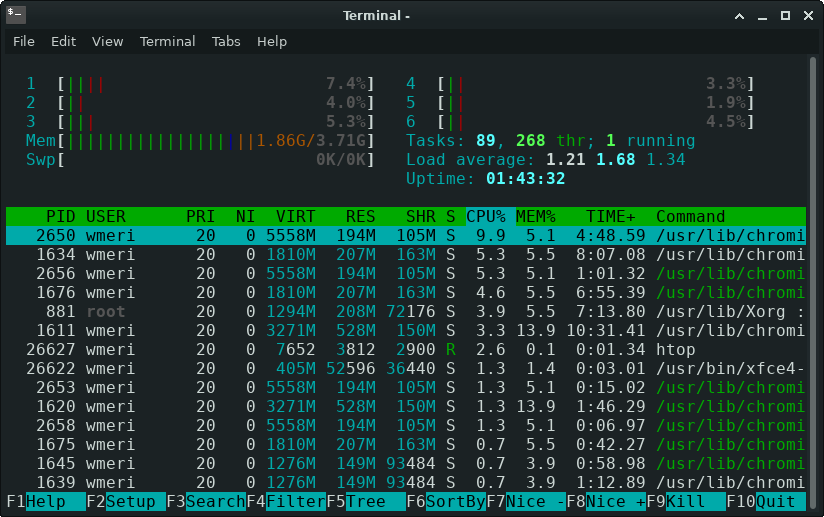 And because of the low power processor and larger battery it lasts quite a while on one charge. Just doing some normal for me media consumption (internet, maybe a video or some music) and I only have to charge it every third day or so. Right now as I’m typing this it’s saying there’s like 15 hours of charge left. If I’m not doing anything crazy I can hit 10 hours on the battery pretty easily.

I don’t regret this purchase one bit. Not only is it quite a capable device, going ARM I am not beholden to the shenanigans of x86. I jest a little, but more options than the current virtual duopoly we have is a good thing. I won’t jump into my opinion on the current CPU landscape, that’s a whole ‘nother rabbit hole, but competition can really only help you or I as it leads to innovation, or at the very least better pricing.

I also got a Pinebook a couple of months ago. I pretty much agree with your assessment of the hardware; nice screen, keyboard, build quality, the trackpad is bad (although to be fair, very few laptops have good trackpads).

I got the optional M.2 NVME adapter, and oh boy it is sketchy. I had to hacksaw part of it off so it did not interfere with the trackpad. The ribbon cable is not quite the right size, and has to be folded and stretched to fit. By default, it wants to interfere with the speaker and has to be held out of the way when assembling the laptop. After the adapter is hacksawed down, it loses the outer mounting holes, so unless you get a super short drive, there is no mounting hole for it. So you either should tape down or zip tie down the drive to the adapter to secure it. This may be fixed on newer revisions of the adapter, but I have not heard one way or another.

The other thing is the drive compatibility is not great. The Pinebook has a strict limit on how much power it can deliver to the NVME slot, so there are a number of drives that draw too much power. There is a list of tested drives here. Also, if you get a thick drive, it may warp the chasses a bit as things are that tight inside.

Oh, and the default bootloader cannot boot to NVME. So you either have to flash a new bootloader or leave /boot on the eMMC or on an SD card too use the NVME as your root fs.

I am glad to hear that manjaro is now solid. Last I checked a two ish months ago they still had a couple bugs to work out. It’s probably time to flash over to manjaro, since I have been at home there hasn’t been need for me to use it so thanks for reminding me.

The Pinebook has a strict limit on how much power it can deliver to the NVME slot, so there are a number of drives that draw too much power.

That’s insane. I wonder if I could mod that to fix it.

Thanks for the supplemental info though.

A PBP style device with the upcoming RK3588 would be neat. Quite a bit more chooch.

I guess they haven’t?

I looked at the wiki, seems that if you purchased in late February or later then you got a newer revision. Hopefully, that fixed the trackpad interference and the ribbon cable.

Quite a bit more chooch.