One Year Linux Challenge Complete. No turning Back!

This is my road of discovery.
I was doing research on building a new computer . My old system was 8 years old and running Windows 7. My work laptop with Windows 7 died, and I got a new one with Windows 10. The more I used Windows 10 the more I disliked it.
I was watching Youtube video’s on Threadripper and Wendell was talking about how good it was on Linux. I tried Mandrake 20 years ago, but did not have drive to learn all about it.
I bought a couple SSDs, and some more thumb drives and backed up all my stuff on spinning rust.
I started with Mint, and my old system ran like brand new. It was like WOW.
Now I have just enough knowledge to be dangerous, tried putting KDE Plasma on Mint. Failure!
Keep calm and re-install.
That has been a recurrent theme on this journey.
Three weeks into the One Year Linux Challenge, I built my new system.


I put Mint on an NVME and distro hopped with a couple of SSDs.
One recurrent statement I kept saying every time I messed something up was “Learn to Walk before you Fly”. I have tried not to ask questions, most of the problems I have encountered, have already been asked and answered.
I finally found a distro that worked for me.
https://arcolinux.com
Erik Dubois has setup a learning path to teach Linux. I started in May of last year, and in 4 months I was running my own custom install on a 3 NVME Raid 0 LVM. 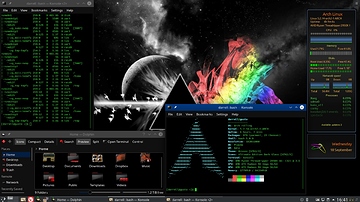 IT’S ALL GOOD FROM HERE!

Ive also just passed my first year of linux back in December, there was this one instance last November where I had to temporarily nuked and paved a windows 10 install just to flash a stupid ROM (LineageOS) over my new phone. After that, I just reinstalled linux. DIdnt even bother registering it.

I too want to move over to Linux and leave Windows 10, but I also like to game and thats really the only thing holding me back.

ARMA 3 (with a caveat that you can only play with linux players)
I think Overwatch works, as well as WoW.
Im sure there are others as well.

Here i am like… 6 or 7 years later and i wouldn’t dream of turning back.

Started with Ubuntu, moved to Fedora, and now rocking Arch, the latest project being a VM with GPU passthrough and looking glass but that’s still a work in progress

Is it possible to league of legends on Linux? I think technically even a 2200G can play that game (even played a game on intel i3-2xxx a month back and it is playable on windows 10).

I think its best to inquire in the official game forums/FAQ. I do not know if League uses some of sort of anti-cheat (it should likely use one).

Using Proton/Wine/Lutris with a game on anticheat usually flags the account as a cheating. So beware and be informed.

I’ve done linux desktop on and off since 1996, but this year is the first i’ve gone 12 months without a physical windows install at home.

And in that time, i’ve noticed there’s been quite a lot of progress with the ability to run games in Wine, either via Proton or Lutris.

Its now “good enough” that between Proton, Lutris (and the associated retro platforms) i can do without Windows for gaming.

Linux is not as good at gaming as Windows, however if you’re willing to compromise and give up some titles, there’s a lot of stuff that DOES run.

It’s a trade-off. Put up with Windows 10’s annoyances and get more complete game library, or migrate and lose some titles until compatibility improves.

Only you can decide which titles that don’t work, you are willing to give up.

I hear that. Steam has worked best for me. Lots of titles in Linux, and more and more each day. Proton and Wine are options, so is running Windows in a VM and passing through a GPU. Looking glass has come a long way. There are forms on here to help set that up, and lots of people willing to help with questions. This last year I’ve played Stellaris, Rimworld, and Factorio on plain Arch Linux. No voodoo needed. Good Luck too you…

Yep. Been about a year now since I started my experiment. Realized in less than a week that I could do pretty much everything I wanted on linux and after a couple of months I removed windows completely… And it’s never coming back.

Is it possible to league of legends on Linux?

Its a one-click install in lutris and for me runs on a few hundred fps. So, yes.

I dont really play it, so I cant really tell you how well it works long term. The launcher is a mess, when you move or resize it a bunch it crashes. But the game seems to run flawlessly.

One recurrent statement I kept saying every time I messed something up was “Learn to Walk before you Fly”. I have tried not to ask questions, most of the problems I have encountered, have already been asked and answered.

You are the ideal Linux user, imo. However, never shy away from the community if you need perspective or have a tough time with something.

Love your desktop, by the way. Wallpaper and theme are 10/10 and I ain’t even a Pink Floyd fan lmao.

Welcome to the club. I dumped Windows several years ago. I got a laptop a couple of years ago with W10; and immediately put Linux on it. I’m using MX Linux on it now because I only use it for writing and watching VODs. I might use it for Arch though; and try customize something specific. Thanks for sharing the link.

Mandrake isn’t something i heard in a long time, I remember using it to setting up a LAMP server more then 18 years ago. I switch to Linux about 4 years ago and distro hop a few times, and now I’m currently running pop-os.