I find it strange that @wendell with all his toys has never mentioned a monitor VESA mount that he likes.

If your curious what I’m look for in VESA mounts…

I could be way off, but I think I recall @wendell mentioning Ergotron monitor arms at some point in time. It’s been a long time, so I’m likely wrong there. On that note, I think I read that a few of Amazon Basics arms are really good clones or Ergotron, or they ARE Ergotron.

I personally have a cheap Vivo single monitor mount I bought from Amazon for my ultrawide monitor (says up to a 32", but it’s holding my 38" with no issues → the weight of the 38" is within the spec of this arm), and a AVLT arm I also bought on Amazon for my 2nd display.

I do wish these had USB passthrough (not a hub*) built into the base as a nice spot to plug in wireless keyboard or mouse dongles → keeping them super close to the devices they’re for. Audio passthrough jacks would have been nice too for my not common use case of having a small mic that I’d like to plug into something like that. I thought my monitor had me covered there as it has a 1/8" jack bottom middle of the monitor, but it’s not a passthrough - it’s just a mean of plugging in headphones if you’re doing audio over HDMI. 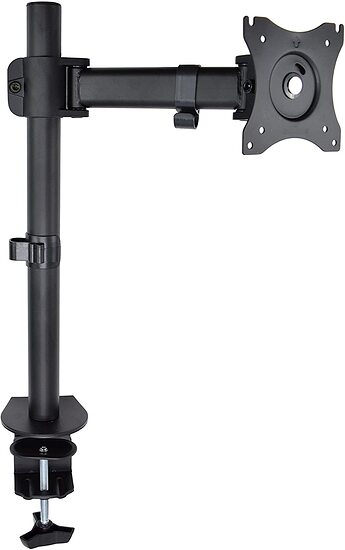 This one doesn’t have an easy way to adjust the height, but can pretty much do all the other adjustments. I mainly bought it because I didn’t plan to be adjusting the height very often, it was cheap, and it’s pretty sturdy. I’ve no real complaints with it aside from having mount it offset from the center of my desk in order to push my monitor as far back as possible while keeping the monitor itself centered on the desk though. 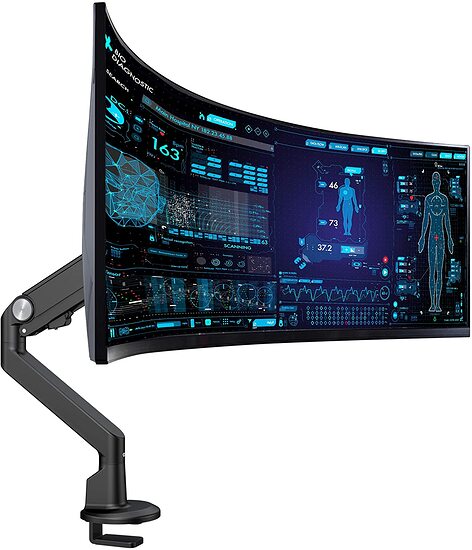 This I bought recently for my old screen so I could use it as a 2nd monitor on my desk more easily. It seems pretty nice, no complains so far. Holds the 27" with no issue.

I haven’t had any experience with dual monitor arms. I bought a VIVO dual monitor arm that functioned similar to the AVLT single arm I have, but returned it when I decided to run an ultrawide as my main monitor with no plans on having a 2nd monitor due to space constraints. 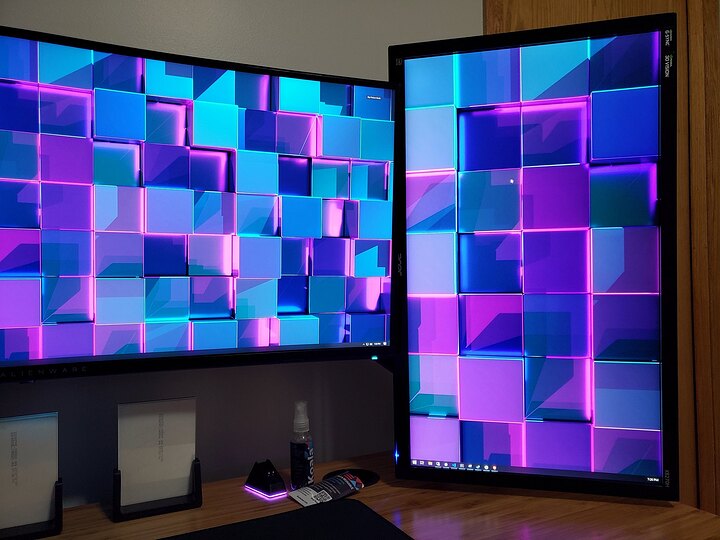 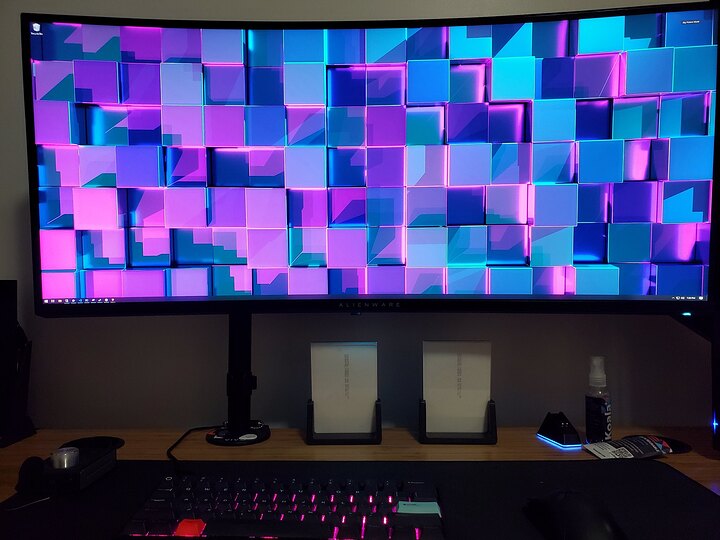 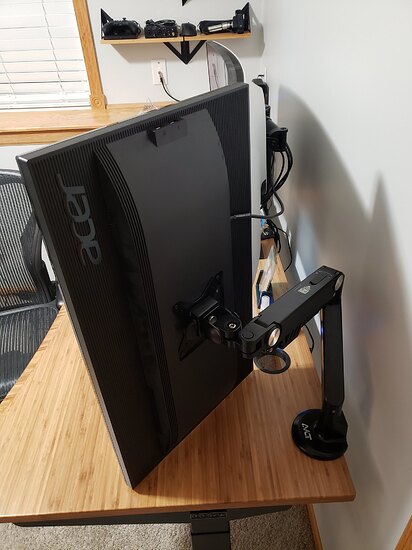 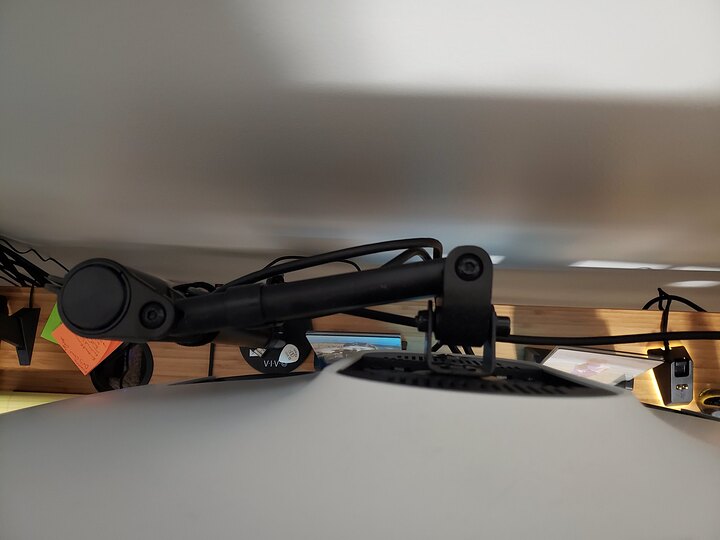 Space Co which has recently rebranded

I mentioned a few times that I bought ~300 monitor arms from Lehman brothers when they went under . They were SpaceCo. Every machine in the office uses a 2-4 monitor spaceo setup.

What links/website/etc do you want me to plug?

Do you have an interest form at least for the monoblock?

I have no idea who I heard recommending Ergotron.

I got a cheap Monoprice gas spring setup at work. Works good enough for the two 23" monitors I have there. Keeps the monitors up while working and I can swing them down when I need to reach in to turn on the under cabinet light.

At home I really need something better, the 27" sits way too low and the 24" isn’t even remotely in line with it…

I have no idea who I heard recommending Ergotron.

SpaceCo - Ergotron, If you were my mother in law that would be close enough to say that they sound alike

Wendell has talked about his preferred mounts tons. I’ve only had one Vivo or something which was garbage. Sadly no one else makes a hex mount that I’ve found so I built a garbage ass set up with a rack and some wood. Super ghetto but no other real choice for 12 screens.

the issue you will have mostly is weight of the screen. My Asus display weighs 14kg and without spending crap loads it is hard to get a mount.

I use a ergotech freedom a long time ago and use it for my 5lb 27 inch Korea 289k monitor. 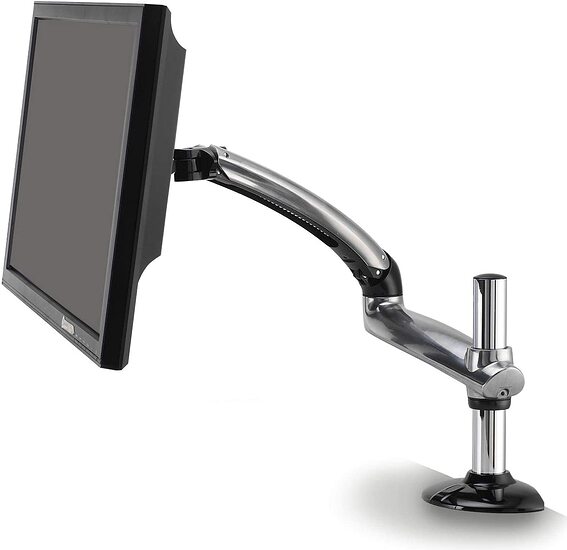 The Freedom Arm for PC easily mounts to any standard desk, giving you back that free desk space that you deserve. Once you open the box, you will be set to go with this unique Monitor Mounting Arm. Compatible with...

Damn they have gotten expensive. The price is almost 2-3x what I paid in 2016.

I asked the same question 4-5 years ago.

@Streetguru, thanks it is $60 before taxes and shipping is it still worth it? Is this overkill? Thinking of getting this mass drop has this for $60 Does anyone have any positive or negative experiences with this? Some good reasons why I should not get this would be nice

Here’s pic I took when I first got it

Having moved multiple times, I appreciate the arm and desk mount being separate as it makes it a easy 1 person job. I usually mount the desk mount to my table then my arm to my monitor. Slotting the arm in on lighter monitors is a lot easier than trying to fiddle with the vesa screws.

I actually asked a while back for larger monitors

Oof, that’s a pricey one. Yeah, my M8 is a little wobbly if you jostle the desk at all, but it has held it’s position for about 4 years now. The tilt is the hardest thing to dial in, the top likes to lean forward. Really had to crank those hex screws down. I might have even added some washers…

The problem with the M8 I think is the ball-joint they used at the end. take a look at the final joint on the M10 where it mates to the monitor, see how it doesn’t use a ball? It uses a double joint there instead with one for left/right rotational, and a separate joint for up/down. [m10_hero_w] This arm from Ergotron has the same articulation …

It is more challenging to line up the holes with the ergotech solution as my 43 inch monitor is significantly heavier. I’m also on the edge of the weight limit(~1-2lbs under), so my advice is to give yourself 5lbs of extra capacity (which I have with my 27 inch) if you want to adjust the height more. I might buy an arm suggested in that thread as my 43 inch monitor is at the weight limit and is very wobbly.

I’ve checked out the brands you’ve mentioned over the years, no one really does quad models much less hex or more…know any one that does?

I’ve checked out the brands you’ve mentioned over the years, no one really does quad models much less hex or more…know any one that does?

Adapt Global, Inc. a company can save money and increase employee productivity by providing workspace solutions that have a positive impact on the performance and well-being of their employees

Who do? I’ve found a few quad from a couple brands but they’re rare. They are also typically only big enough for 4:3 panels. The Hex Vivo I had was just a terrible design. Impossible to really position things, jank as hell. Sadly my set up is more suited to single mounts on a wall with some reach for the “wrap around” on the outside edge screens. Right now I’ve had to kinda downgrade with 4 screens across the room unused and only running 8 at my desk now because I have no way to mount correctly. 3 on my desk, 3 on a rack and my ghetto mount system above those, then 2 4:3 screens sitting on top of my engineering monitors.

The price, solid build quality, and display size support make this mount our top recommendation. These are some of the best Monitor vesa mount. Go for anyone within your budget and requirements.

Hopefully it will help you.

If you are mounting many heavy monitors, Humanscale also offers some beefy quad arms. 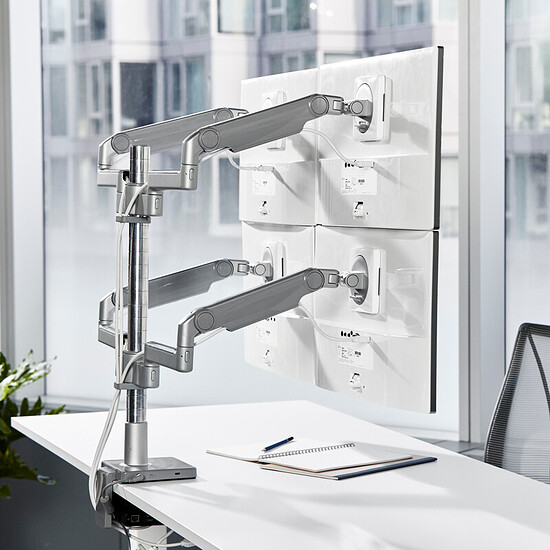 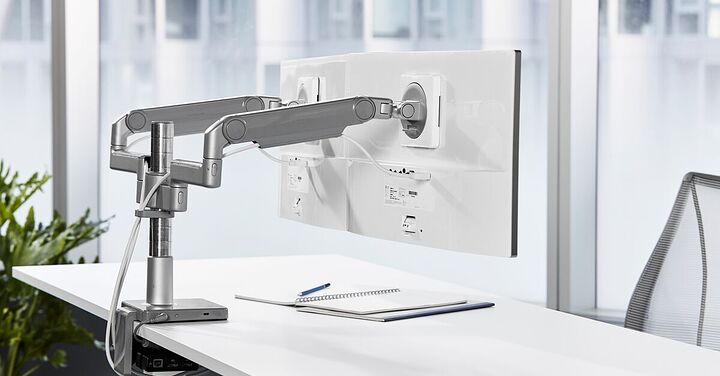 One thing i’ve found, if you get cheap monitor arms, then that’s exactly what you end up with. It’s typically fine though if you are not supporting a very large or heavy monitor. The earlier advice of finding an arm that is rated at least 5 pounds more than whatever you are mounting is a good rule of thumb for cheap arms. The expensive arms you can usually trust the ratings on, but they can be crazy expensive.

Also you have to consider your mounting surface, that multi-arm setup from Humanscale or SpaceCo for example, you could be hanging up to 120lbs or more off that one mount. So it better be secured to something pretty sturdy. I could easily invision it tearing the wood out of the top of a cheap desk if you mounted 4 heavy monitors to it.

I paid about 500 dollars for my Humanscale M10 monitor arm, but it’s supporting a single very large, very heavy, and very expensive monitor, and I move it around several times every day. So for my purposes, it was worth the price.

Your other solution is Ebay. Find out what you want from new manufacturers, and then look for a used one on ebay.

I keep hoping someone will post a decent brand that does 6 and 9 screen mounts but alas seems 2x4, ply and redneckism is the only option.

keep hoping someone will post a decent brand that does 6 and 9 screen mounts but alas seems 2x4, ply and redneckism is the only option.

Given how much the 4 monitor mount cost, and the physical limitations they have, by the time you get to 6 and more a custom wall setup/custom rig setup becomes economically comparable and there’s really no market other than us crazy technologists on a budget anyway

Yeah sadly I hear that. With some 3 screen mounts costing over $1k it’s either BS markup or some how they can’t compete with a piece of 4x4 pressure treated lumber heh.

Still I can dream. Just be nice to one day see my setup and have it NOT give me the “I hope no one sees this” vibes because it’s so ghetto. Sure it works but there is a degree of being sick of functional but fugly DIYing at this point in my life. I’d like some clean lines, some degree of neatness and flexability…and yeah, not require some Richard Brandon “I’m so stupidly rich I’m going to Space on Tuesday” amounts of cash heh.