Intel used a Xeon processor for its “new” desktop demo, likely the 8176 Xeon CPU, then pretended that the CPU was a brand new desktop part. The company also pushed the narrative of a 5GHz overclock on 28 cores, but neglected to note that they were using a chiller to achieve these temperatures. It’s an old CPU – rebranded as a new one, at that – and it’s overclocked with an unnamed chiller that operated below -10 degrees Celsius.

And this is the “presentation” in question.

And here is a look at what that cooler was:

We confirmed that Intel was using a water chiller in the 5 GHz demo, a Hailea HC-1000B, which is a 1 HP water chiller good for 1500-4000 liters per hour and uses the R124 refrigerant to reduce the temperature of the water to 4 degrees Celsius. Technically this unit has a cooling power of 1770W, which correlates to the fact that a Corsair AX1600i power unit was being used for the system.

Here is my main problem with this: The “presentation” shows only one thing and that is a performance metric, a score. No product, no specs, no nothin’. All they show is a number in cinbench.

In that context the guy says “yeah, we are going to take that product to market in Q4, you can have it.”

And that is simply a lie. You will not be able to buy that performance.
That is not a stunt, a clever presentation or a way of showing their strengths…

That is a lie to everyone’s face and nothing else.

Sub ambient exotic cooling is likely only available to like, what, 12 people in the world? And all of them are friends with Der8auer. It’s a dog and pony show to, as Steve says, show off their e-peen.

I wouldn’t exactly call a chiller for a fish tank exotic, stupid yes but not exotic.

I think it is fair to call any cooling method exotic that is operating below ambient temp.
Because regardless of what it is, you will have to deal with condensation.

It’s not like it’s black magic, normal people don’t do it because it’s stupid and if you’re shelling out the cash for a 28 core from Intel it’s highly unlikely to be out of that persons means.

It’s obvious shit like this isn’t a mass market product but everyone wants to REEEE about Intel.

The fact that anyone is surprised depresses me. I kinda knew this was bullshit the first time I read 5GHz on all cores.

If anyone here bought it you’re really fucking stupid.

Posted this elsewhere, but it is relevant to this thread too:

It isn’t about what we here know, it is about what is being published by idiots to be read by idiots. We know better. Hooray. But how many are “we”? Five percent? Hardly. I would say maybe one or two percent, if that.

Also since when is it reasonable to call out the ones who believed the lie instead of the liar?

They really could have done a better job on the insulation, it looked like shit.
This is straight up amateur hour 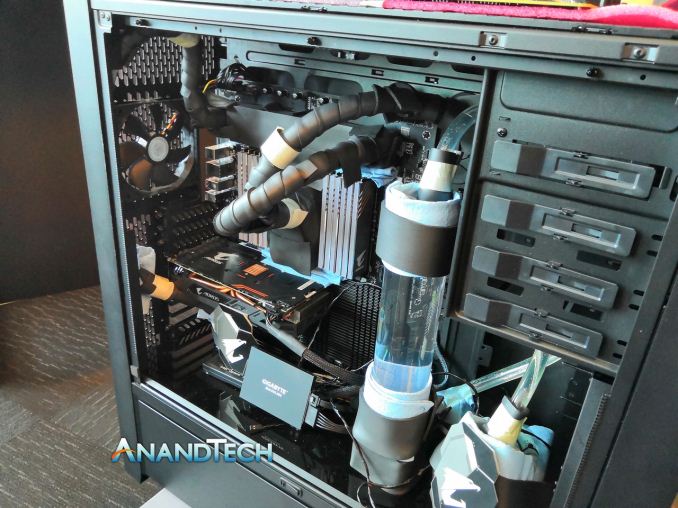 Its that people should know better. IDRC if they’re dumb consumers, it should have been as obvious as the last US election. Yet people were still shocked.

I don’t feel sorry for my opinions, people need to learn shit before freaking out and writing 800 articles about a CPU that probably won’t come out.

Its that people should know better.

Well, they don’t.
And it is on the ones who do know better (that’s us) to call out BS when we see it.
That is why I shared my opinion.

Fortunately it looks like the techtubers so far are doing a pretty good job on this.

Damn, did Gigabyte sponsored this shit? The board is Gigabyte, the ram is the new Auros or Aorus or whatever from Gigabyte, the GPU is by Gigabyte…

I wouldn’t exactly call a chiller for a fish tank exotic, stupid yes but not exotic.

ex·ot·ic
iɡˈzädik/Submit
adjective
adjective: exotic
1.
originating in or characteristic of a distant foreign country.
“exotic birds”
synonyms: foreign, nonnative, tropical; More
antonyms: native, familiar, nearby
attractive or striking because colorful or out of the ordinary.
“an exotic outfit”
synonyms: striking, colorful, eye-catching, flamboyant; More
antonyms: conventional
of a kind not used for ordinary purposes or not ordinarily encountered.
“exotic elementary particles as yet unknown to science”

Fits the bill for exotic to me…

Regardless of how much it costs. TR was designed as a HEDT part. Intel is just packing server hardware into a desktop and pretending its comparable. The damn chiller pulled so much power they couldnt run it and the system off the same circuit.

I agree that its just intel showing what they can do and not meant to be mass market but its obviously supposed to be a dick measuring contest. We have to give them shit for it. Its body builder vs power lifter.

So HEDT itself is exotic and exotic cooling for an exotic processor is totally normal.

So HEDT itself is exotic and exotic cooling for an exotic processor is totally normal.

That literally doesnt make any sense. If the processor is exotic and the cooling is exotic that somehow cancels out and is normal? cmon now.