I’m thinking of my own design, sort of trashintosh like, to print and basically provide airflow with noctuas 120mm.
What do you guys think?
This is a rough sketch, I think I’ll go with the first, fullsize gpu, variant as the second one exceeds my build volume anyway. 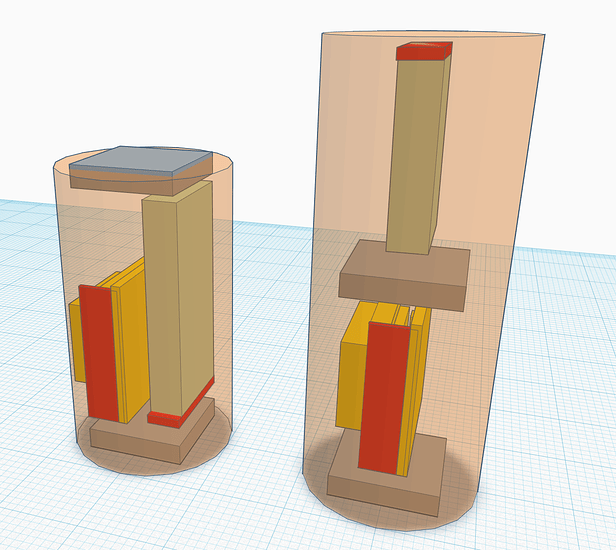 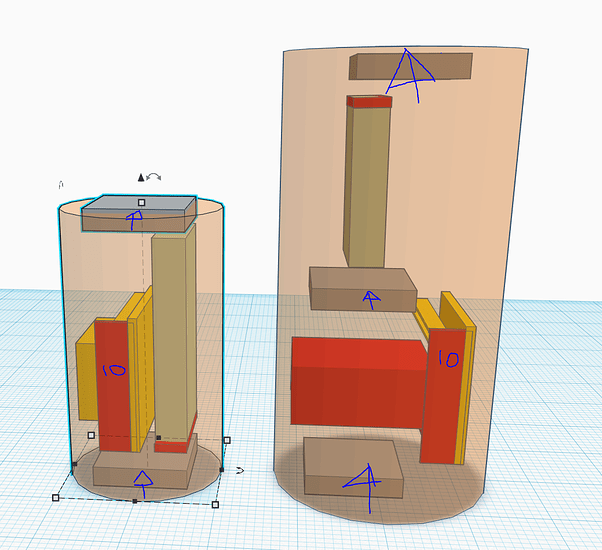 Btw, please let me know if this was supposed to go in a separate thread, and I shouldn’t spam ya here.

Just want to make sure I’m looking at this right: 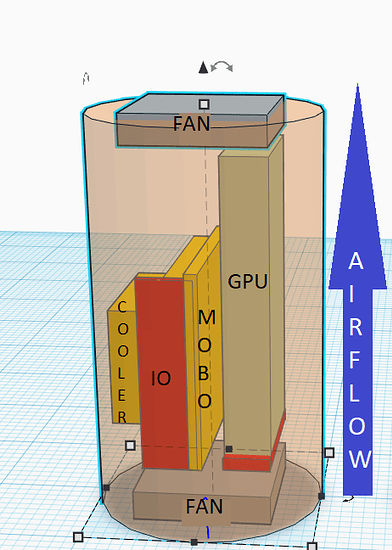 Only two things I see are

Aside from that the cylindrical design isn’t a bad idea. Makes air flow certainly easy to plan. And what board are you thinking? I don’t know of any STX motherboard with a regular PCIe slot, the ones I know of you have to run the GPU through an M.2 slot.

Maybe make the bottom fan a 200mm? Not sure how big the diameter of the tube is.

Btw, please let me know if this was supposed to go in a separate thread, and I shouldn’t spam ya here.

I would make it into a seperate thread, but I don’t mind either.

Feel free to edit the thread title and add tags.

I had similar type of plan in my mind few years ago. Interested to see how this works out.

Pico PSU (+ external brick of course) is an option? If so I’d surely go for one since it would make your life a thousand times easier.

I’ve seen some PCIe riser cables that are not made in one piece but have the connections bunched in smaller strips. Maybe one of those could be twisted and manipulated easly without too much worry.

Some of the designs may be hard/impossible to do, but ribbon cables can do 90° turns. 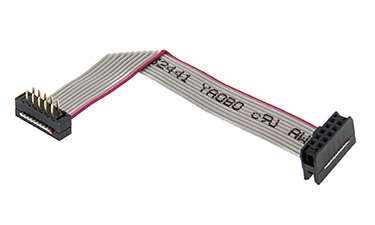 I don’t think pico PSUs have PCIe connectors, and combo’d with the (comparatively) low power from an M.2 slot I think GPU choice would be severely limited.

An option I forgot about until just now would be an HD Plex power supply. It’s bigger than a pico PSU, but can output more juice. Requires a beefcake power brick though.

I just figured in the trashcan configuration it might be a lot of bends for a riser cable. It’d be 180° to bring it from the motherboard to near where it should be on the card, a 90° fold to bring it towards the edge of the card, and possibly another 180° for it to actually attach to the card. I suppose with some careful bending it would work fine though. I’ve never actually used a PCIe riser cable.

That’s what I was thinking about! I didn’t word it properly, but in the end, somehow, the information got to you.
I know it requires a very big external brick (and can be costly too), but I think there’s a tradeoff between cost and complexity. If you manage to get an SFX PSU between the top fan and the motherboard you might be able to squeeze one in, but the cables would make a very big mess inside. Maybe you could solve that issue making your own custom lenght cables, if you feel comfortable.

SFF builds are really challenging, but I can’t wait to see what you come up with!

P.S. I’d turn the motherboard around 180° to let the CPU cooler breathe better.

Thanks, yes, that’s the airflow direction. I forgot about the power supply :(.
Would it matter if a choose a m-ITX over the other? I’m thinking a b450-m, midrange gaming/content creation. 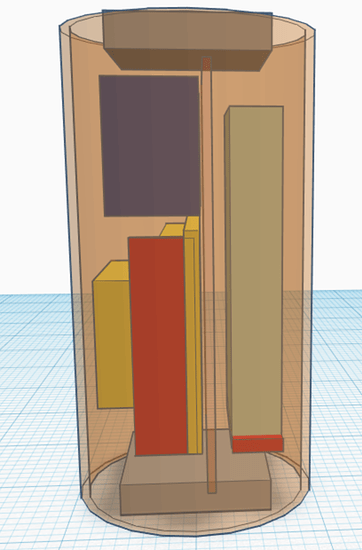 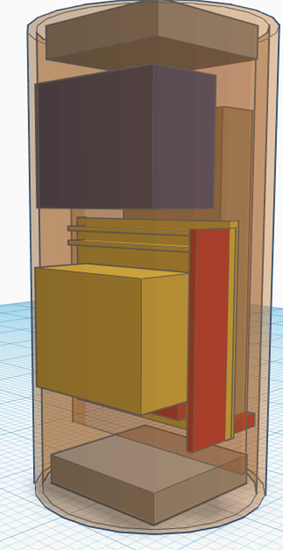 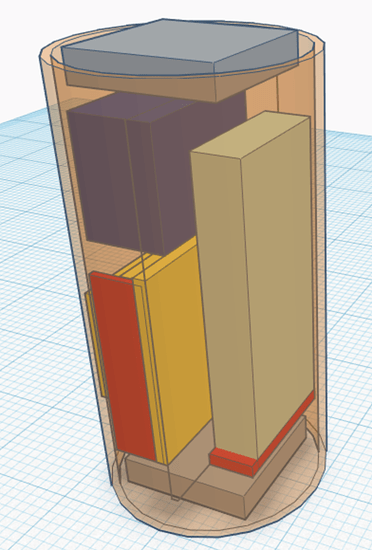 I’m going to fill in the gaps off square shaped 120mm fans to have them flow nicely to the tube shape, so that the fans move the air better.

I added a separator wall at the approximative middle of the tube-shapes case, so that the hot air from the GPU doesn’t go to the board+power supply, but instead is moved upwards, outside the case, by the two fans.

A few updates, thinking of having the orange cap removable, sort of increase airflow when you need it out of the way, and have it on when browsing, so it hopefully reduces noise when less cooling is needed. 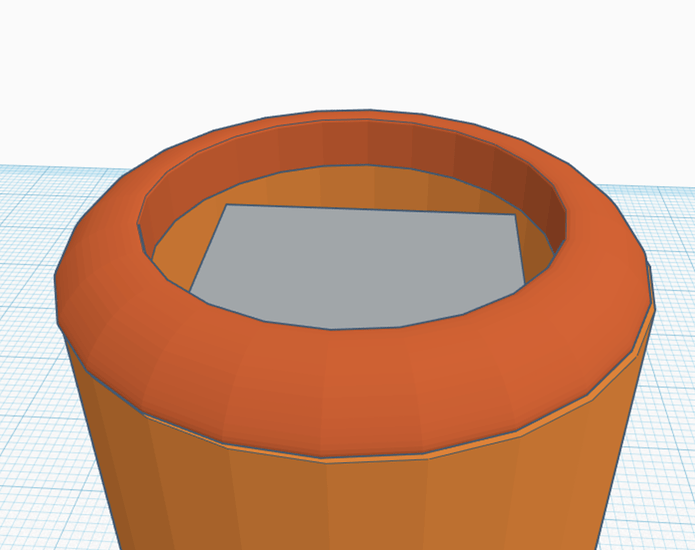 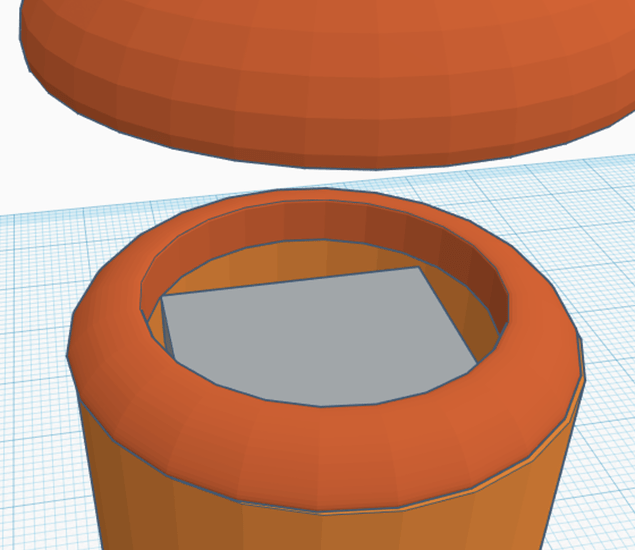 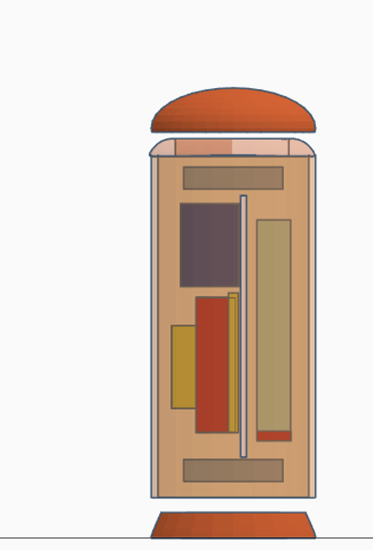 ITX is larger than STX, but has a full size PCIe slot. If you want an full size GPU I think it would be better to go ITX.

If you could get an SFX power supply in the case and ITX motherboard it would be great in my opinion.

A blower GPU might be a good idea but probbably also noisy. Have it with the intake at the bottom of the case and the card turned so the intake fan is facing the case wall and not the motherboard so it does not steal the air from the main case fan intended for the board and CPU cooler. It would also have the hot air being ejected up too out of the top of the case keeping with the overall air flow. The power cables being at the end of the card too would have them near your PSU and not have the cables all over the case for the GPU at lease. You could even add in a vent or other such grille into the case near where the blower pulls in air so it can pull in clean air right from the side.

The only thing I don’t know about if if there is a combination of motherboard rotations and PCIe extrntions that will allow it.

Edit: because pictures are better and were provided… 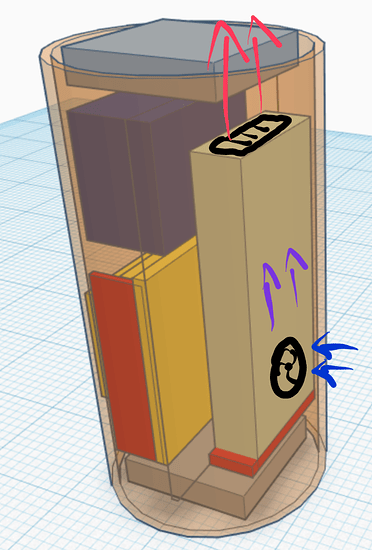 I don’t think a blower cooler is needed.

In my portable system, I got more or less the same setup as suggested here. 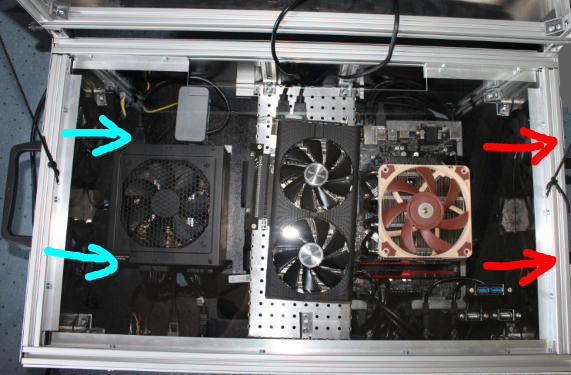 What may work to my advantage is that the heatsink fins of the GPU are in direction of the airflow.

Just noticed, the design has I/O pointing down. So a blower would work against case air flow. 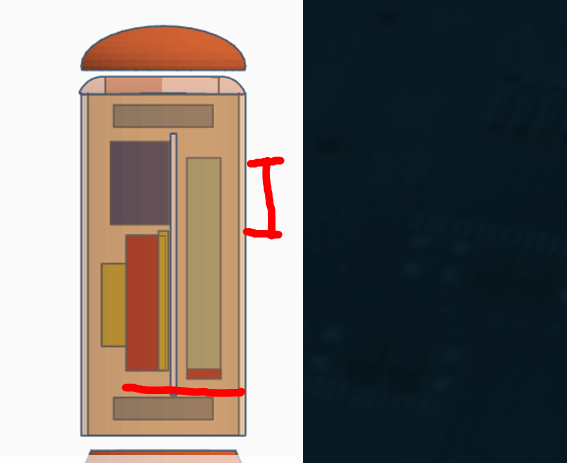 Sorry for not mentioning, I didn’t consider blower because I have a dual fan evga and it still exhausts somewhat like a blower (through the io shield), but is able to cool better so it ends up with less noise. Rtx line is dual fan only but forgot to mention the GPU I would like, maybe a 2070 or dual fan 5700xt.

What diameter does the tube have in your plans?
Maybe a SilverStone Air Penetrator 180mm fan could be used to cover the whole thing.

It’s now at 200mm. Wondering if there is a way if removing the square frame of the fan, and maybe fit a larger fan this way?

If you are careful you could cut the mounting ears off of a fan and friction fit the fan.