Hey hey, it’s me again with another small build

. And tradition oblige, this build must also bears the name of another character in the Neptunia franchise (even if I have not played the game in years). As it will be a small blackish build, it fits the petite nature of ユニ (Uni).

So my brother is mainly using his PC to browse, along with SolidWorks modeling. His current pc is quite old by now, being the first PC I build for my mom. It as an Haswell i7 along a GTX 760, 1TB SSD and unknown amount of ram. The GPU is becoming a limiting factor as sometime his SolidWorks project chugs (I think it’s mainly because of the meager 2GB of VRAM), and he wants a smaller PC, albeit with a limited budget (max 1000$ CAD).

Hence my crazy ideas come in play nicely. I always wanted to do a build inside an InWin Chopin so it’s now the time to do so! The case is quite small, stylish, and has an included power supply which helps keep the cost low. And there is a Pro variant with a 200W PSU, so power is less of a worry. But the integrated graphics inside a Ryzen APU is a downgrade from a 760, and do not solve the VRAM issue. And normally you cannot fit a GPU inside this case. 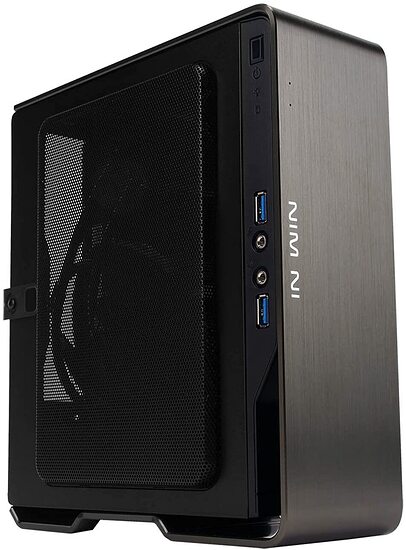 You can do like a popular Chopin GPU mod, Pluto, and remove the PSU to fit a low profile GPU, and use something like an HDPlex a external power brick to power everything, but it adds cost to a project that needs to be as cheap as possible. Here comes the RX 6400. Albeit all the critics about the the card, it’s a low profile, single slot, with 4 GB of VRAM, and is power sipping card that is readily available at “cheap” price (looking at you expensive LP GTX 1650…). It’s a perfect fit. A reddit user already did use a RX 6400 to put it behind the motherboard, so the idea is to do the same the same, albeit in a nicer way.

I wanted to buy some used components to bring cost down, but used stuff are not that much cheaper than new, so I will pretty much go everything new, except for the PCI-E 4 riser cable for which I found one that would the bill for cheap-ish (but that would not take a month to arrive). Also, if his SSD (a 850 Pro if I recall correctly) is still in good health, I might reused it to bring the cost of the build down.

I will update on the project. I intend to do it quickly. I will not wait for Ryzen 7000 because anyway the goal is to have a cheap build. A Ryzen 5000 is already quite an upgrade from a Haswell.

(Note: From that build I will recover a EVGA Hadron Air, the first case in which I build a PC for my mom. This case will be reused when my mom will upgrade her PC in the future. Thing might be interesting with that one as I’m not reusing the included power supply (which is like almost 10 years old now))

I put the LP-SS XFX RX6400 into a Dell Precision SFF and it does well enough for 1080p/30fps/med-low, but despite the efficiency keep in mind you are going to need direct airflow for anything over 20W sustained and an excessive amount of air for the full 40W. With decent airflow mine still runs in the 80s like its a laptop chip, but the fan isn’t too loud unless you cut off airflow completely.

Also if I had to choose again I would probably go with the Sapphire version as the cut down cover looks like it would provide better cooling than the full-length one on the XFX. Latter wins the aesthetics, though both should perform the same.

The critics hate the 6400 and 6500 because they lack built-in encoding hardware, but if you are using an AMD APU or any Intel non-F chips, you should be fine. In all honesty, unless your cooler cannot be mounted on LGA 1700, I would have gone with an i5 12400, because Intel QuickSync is usually supported in a lot more workloads.

I have a Powercolor RX 6400, but I’m using it on a threadripper as a display output. Still waiting for new RAM to arrive, hopefully it will work this time.

need direct airflow for anything over 20W sustained and an excessive amount of air for the full 40W. With decent airflow mine still runs in the 80s like its a laptop chip, but the fan isn’t too loud unless you cut off airflow completely.

Ok that’s good to know. I already planned to have large mesh on the back side of the case in front of the GPU so it could draw in fresh air, but I will maybe look to add maybe a laptop fan just to add more airflow. Or maybe make the mesh bulge like on the CPU side and put a 40mm Noctua.

I would have gone with an i5 12400, because Intel QuickSync

Ryzen do perform better than Intel in Solidworks according to Pudget System. Also it’s cheaper overall and AMD is the default option for my builds now.

Just a little update on the part selection, as I ordered everything last weekend:

That project will be a fun little mod.

In all honesty, I’m more worried about what I am going to run on top and if I want my host system to be a desktop or not. As in, I’ll have one Windows VM, but I don’t know if I will just run a display server on the host itself, or if I’m going to make a VM and pass the 6400 to a Linux VM. But I may end up doing that, just because I may want to mess with the system and just use a snapshot at the host level to go back in time.

I have this case and I like it a lot. You might want to look at these!

Good luck with your build!

I went off with this article which underlines a 14% loss over PCIe 3. Obviously the results are gaming specific, and I don’t the impact on SolidWorks, but prefer to ensure the most performance as the pc will probably stick around for a long time. Also my brother was looking at maybe getting Elden Ring, so gaming oerformance will be better covered.

Ya I know Picopsu. If the budget was not an issue, I would love to go for RTX A2000. I would have needed to remove the PSU to fit the card so I would have went with a PicoPSU in that case. But I would have gotten a HDPlex because sound 12V power bricks are not that common.

You might want to bump up to 3600mhz as the GPU will use system memory if it exceeds it’s vram, also CPU will get a ram/fabric/L3 cache boost
Each stick dual rank if possible

Received pretty much every parts, except the riser cable, so I was able to at least begin to lay out how I would do the mod.

Testing everything, it boots and everything works. Luckily, the BIOS version on the mobo was recent enough to accept a 5000s CPU, so I could update the bios to the last version. Downside, the ram does not have the clocks the guy said it had. A bummer, but I cannot complain too much for the price. I will try to manually overclock the ram. 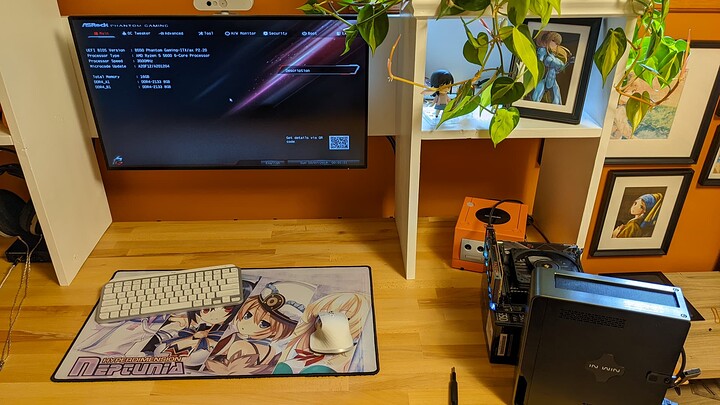 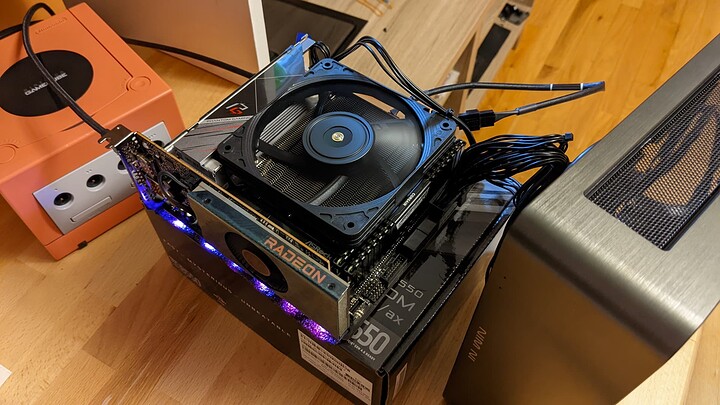 The InWin Chopin is much tighter than I expected. Just putting the mobo was quite a delicate thing to do. I was very happy that the mobo had an integrated IO shield. 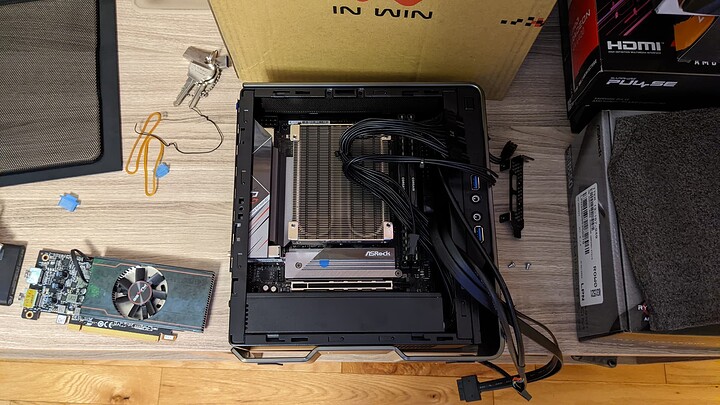 Between the mobo and the PSU, there is barely like 2 mm of clearance. So the PCIe riser would need to be routed first and it will be squeezed between the two components. 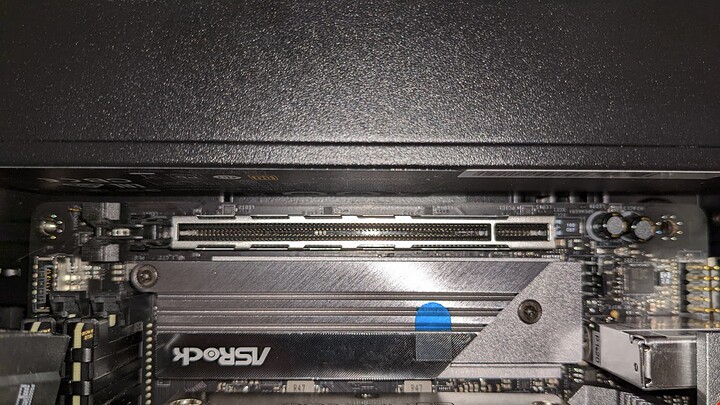 I was thinking about making an opening right at the bottom to pass through to the back side, but seeing how propped up is the mobo, I will instead pass the riser cable behind the mobo and do an opening at the top instead. 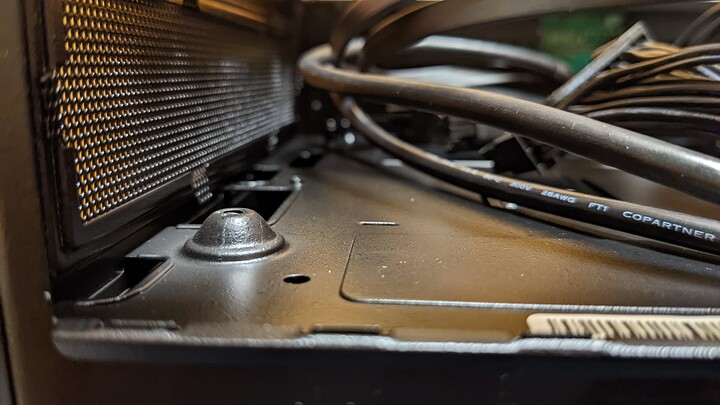 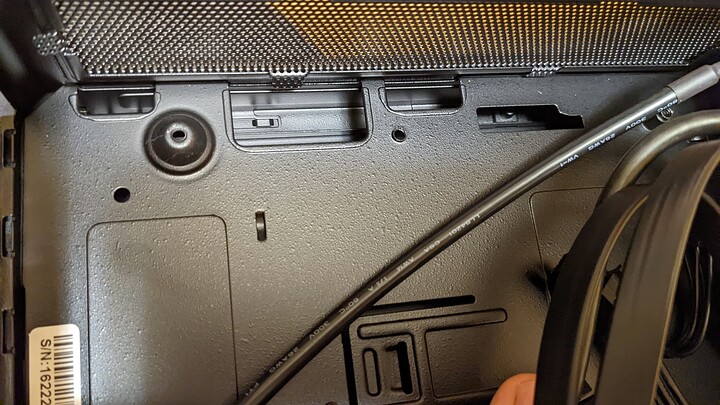 This way it will help also for the GPU clearance, because with only a piece of paper, the GPU is already flush with the side. The PCIe slot is slightly too large. So it’s better to do not add height by passing a riser cable behind, even if I will do an opening in front of the GPU and put mesh in the same fashion as on the CPU side, which would help to gain some height clearance. 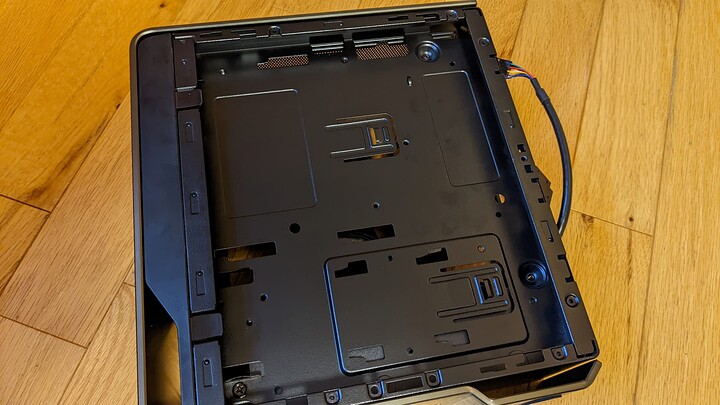 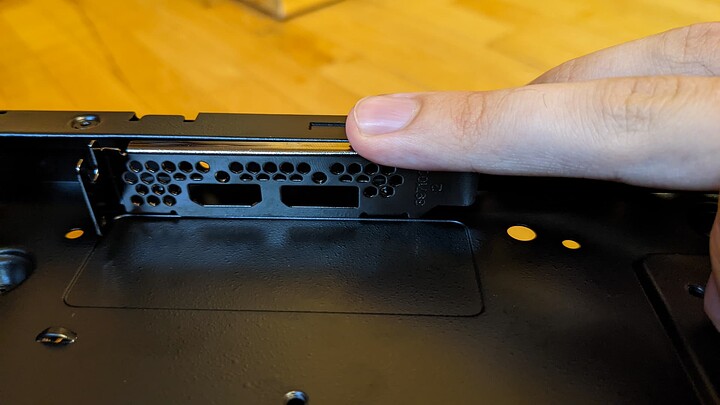 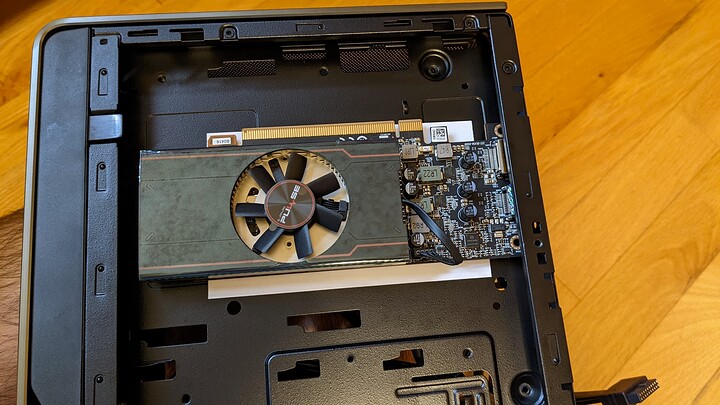 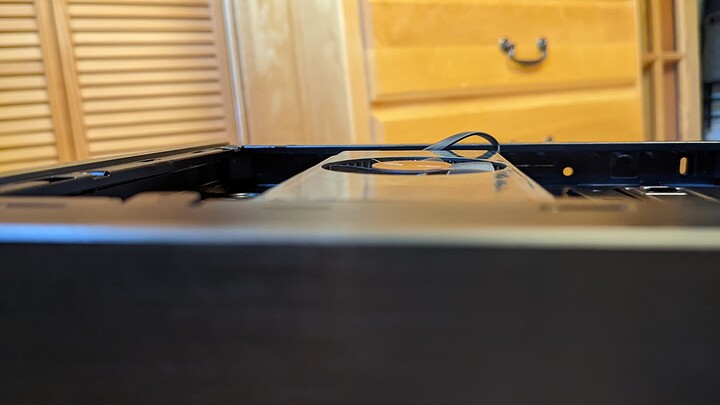 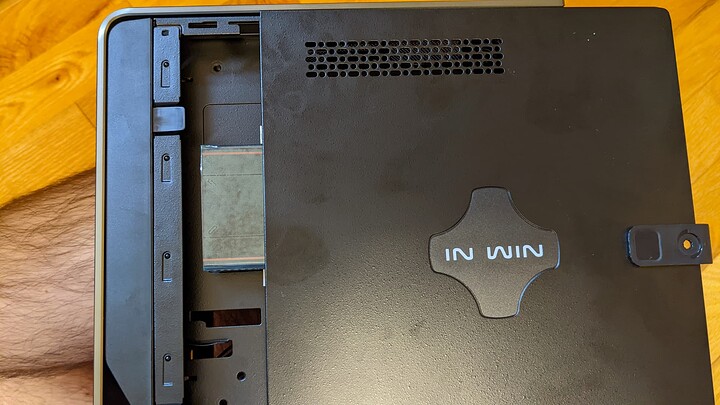 And for @E-Wasted, some pics of the Noctua fan 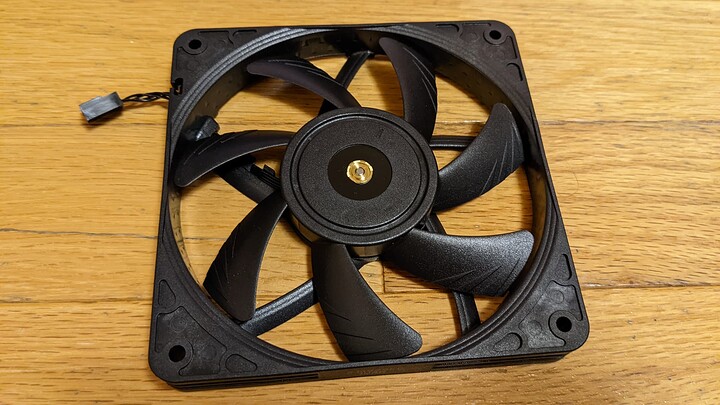 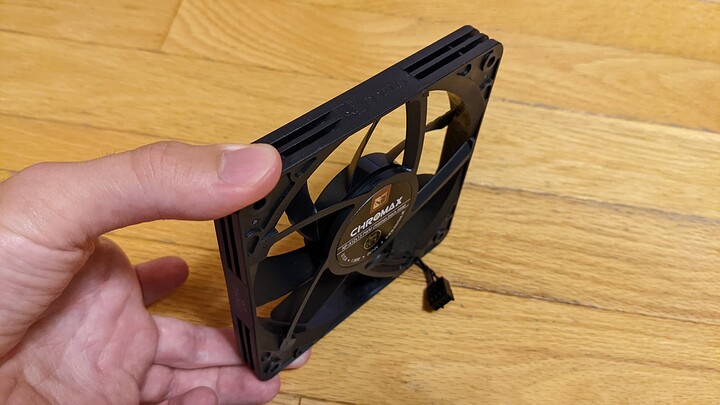 Received the PCIe riser and… it’s way too stiff. I’m afraid that I willl break it if I bend it too much. And 200m is too short for going behind the motherboard. 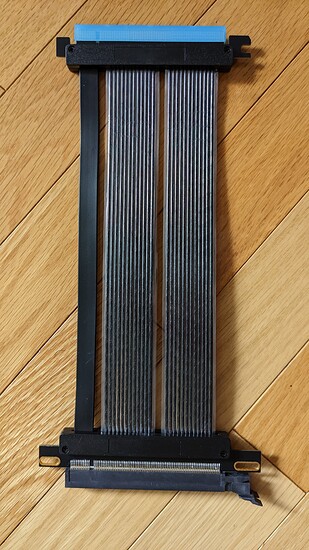 So I will just return it and finally I will get a dual reverse connector one, doing an opening at the bottom of the mobo as I initially planned, so there will be less bends to do. The PCIe riser do not add that much thickness behind the GPU.