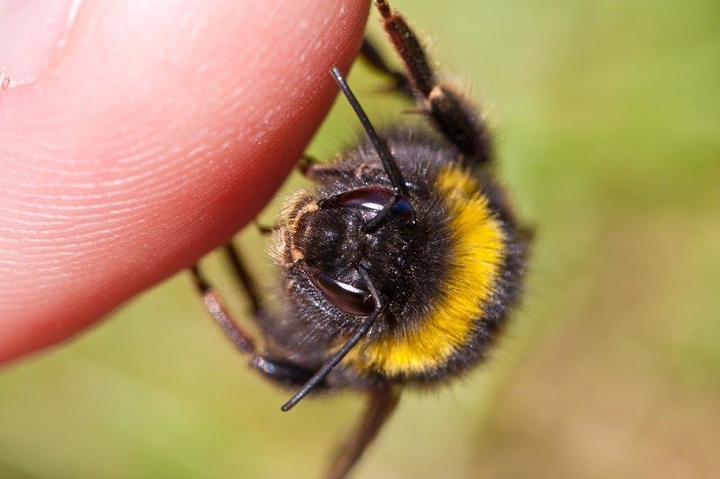 Recently in a blog post or a reply to someone (Who can remember these things?) I made the statement “This is after all Bee Syndicate not Honey Bee Syndicate.” and I was right. In this Blog as in the rest of the world. When talking about “bees” it is almost always the honeybee that is the topic of conversation and yes we do love talking about the little honey producers, but it's high time we give someone else some time in the spotlight. So to start things off I give you... 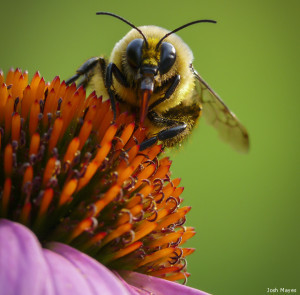 The Bumble Bee is a very close relative to the honeybee and is probably the second most famous type of bee. Being second might seem pretty good but it’s not always everything it’s cracked up to be. (Just ask Dave Mustaine.) There are plenty of misunderstandings and outright confusion when it comes to this plump little pollinator. I hope that we can clear some of that up here today.

To get things started let's talk about who the bumble bee is. To do this I will use the honey bee as a point of reference. (Excuse me Bee Syndicate readers; If i may have a moment to speak to the Bumble bees. Now I’m sorry bumble bees I’m not doing this to diminish your importance by comparing you to your more famous cousin but around here we talk about the Honeybee a lot and thus our friends here are more familiar with honey bees. Don't look at it as diminishing you in the ever present spotlight of the honey bee but sharing that light with you only to your benefit.)

bumble = buzz and bee = bee
got it ok good.
According to the Oxford English Dictionary (OED), the term "bumblebee" was first recorded as having been used in the English language in the 1530 work Lesclarcissement. the term "humblebee" predates it, having first been used in 1450 in Fysshynge wyth Angle.
Additionally an old provincial name, "dumbledor", also denoted a buzzing insect such as a bumblebee
-- the above copied from Wikipedia -- 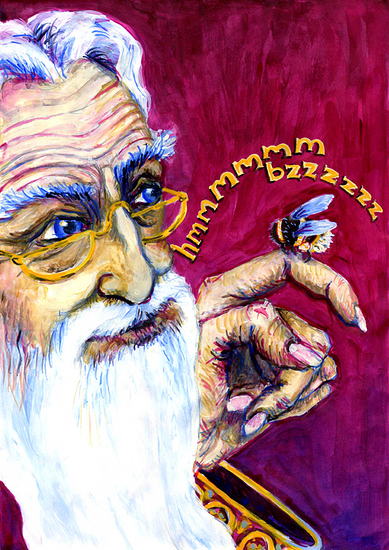 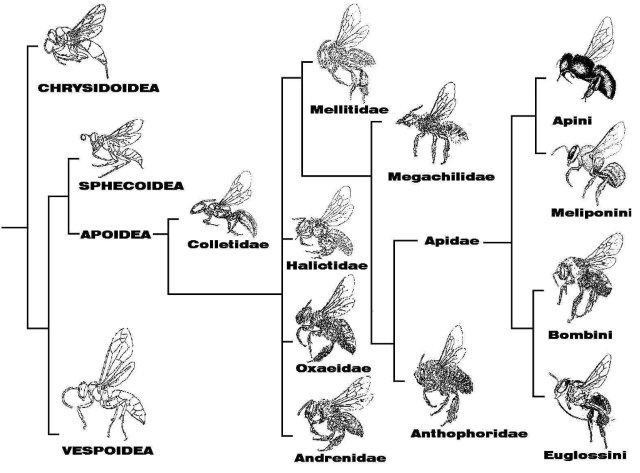 The Bumble Bee Is a member of the Animalia kingdom of course. Because it is and invertebrate with an exoskeleton and has appendages with joints it falls into the Phylum of Arthropoda. Arthropoda includes all sorts of critters from The Japanese Spider crab (the largest arthropod ) weighing up to 42lbs to the tantulocarid Stygotantulus stocki a microscopic crustacean that measures .0037 inches. The Bumble Bee is in the classification of Insecta because its body has 3 parts a head a thorax and an abdomen. it is estimated that over 90% of life forms fall into this classification. As a winged insect bumbles earn a spot in the order of Hymenoptera.. Like all bees bumbles can be found at every Apidae Family reunion. This humble bee shares the sub family of Apinae with the majority of pollen basketed bees. Its at this point in classification that the bumble and the honeybee part ways and the bumble continues down the family tree with the Tribe of large bristly bees called Bombini to the Genus of Bombus.

Development of a Bumble Bee Hive 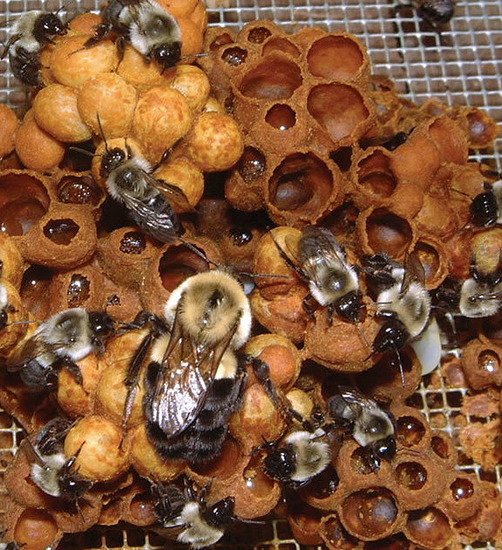 Early in the spring a hibernating queen emerges from her hideaway (usually somewhere underground) Unlike the Honey bees who Cluster in winter and ride out the cold fridged days together as a colony. Bumblebees for the most part just die for winter yep at the end of a good year they all high five each other and die “Good job mary” “You too glenda gerr akkkk augggh ahhhhhh.” That is except for the queen. She spends the last part of the season bulking up a bit then takes a long nap for the winter. After she emerges she finds a good location to nest. she then starts to build wax pots. these pots are not organized like comb but clumped together quite randomly. In these pots she lays her first batch of brood eggs for the season. In this early stage of the hive She takes on every bee job Queen, Nurse, forager, Guard, everything. (that is except drone.) She cares for and raises the first few generations of brood slowly passing on responsibilities to her daughters. 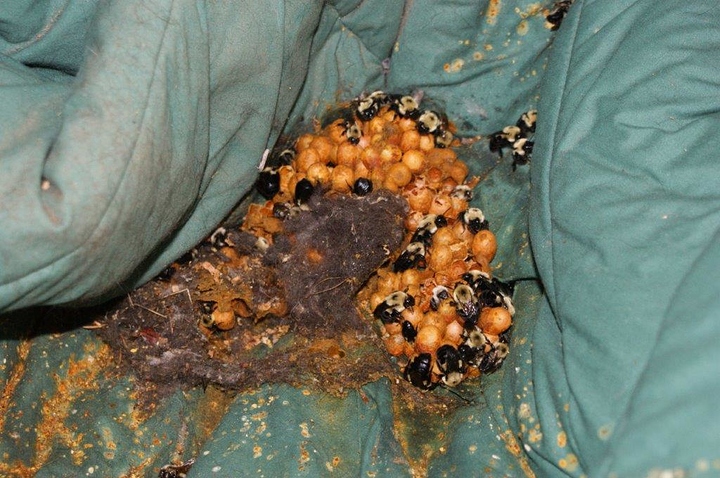 Bumble Bee colonies are far smaller than honey bee colonies they usually only numbering about 50 bees compared to honey bees numbering in the tens of thousands per hive. because of the small numbers of hive residents and the fact that the bees don't overwinter they don't store honey in large quantities like the honey bee..They do however still gather nectar and turn it to honey for food just on a small scale. They also gather pollen mostly for feeding the brood

Like most pollinators the bumble bee is in decline. The biggest threat to the bumble is loss of forage and habitat Bumble bees are more sensitive to the use of pesticides than other bees. While we are finding out that the use of neonicotinoid pesticides is probably not as bad for the honeybee as we once feared they do seem to be quite bad for bumble bees. It seems we got so scared about what was happening to the honey bee in the early 2000s that we didn't pay enough attention to the bumble bee. Some neonicotinoid pesticides can reduce the number of bumblebee queens by 80% and this is especially hard for bumbles because each queen is responsible for creating and entire colony from scratch every year. 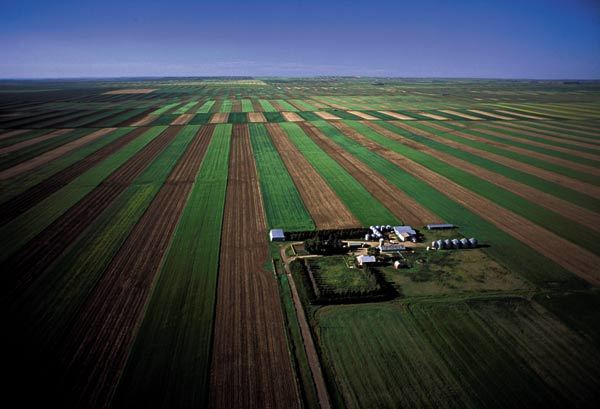 Bumble bees are buzz pollinators see Bee Syndicate S2 E3 2/10/2016 Bees; It’s How Plants Do It This makes them a lot better at pollinating some types of plants than other pollinators. This includes lots of vegetables that tend to be grow in greenhouses where honeybees don't do so well. Bumble bees do just fine in the greenhouse, and in the field are more efficient pollinators than the honey bee. 100% faster in fact! Bumble bees visit twice as many flowers per minute compared to the honey bee. 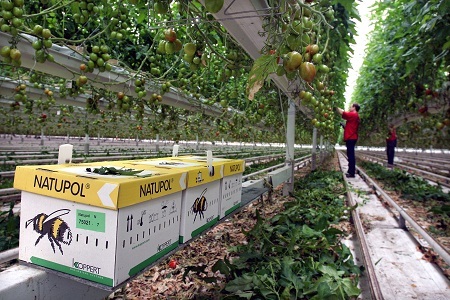 Bumble bees are also great pollinators and foragers because the avoid visiting the same flower twice in a short period of time. This allows the flower time to refill its nectar supply and allows other flowers a better chance of getting a pollinator visit. Bumbles have two very cool ways to accomplish this. The first is what you would expect They mark it with a scent. Ok fine lots of animals mark things with scent not that big a deal OK I admit, but the second way they avoid visiting a flower that has been visited by another bee is very cool. “Get this” They detect disturbances in the electrical fields on and around flowers that indicate whether or not another bee has visited the flower recently. This amazing ability is called Electroreception. We have only recently become aware that the bumble bee can do this. Electroreception is generally an ability found in saltwater animals. but bees are awesome so they can do things like sense electrical fields and sniff out landmines and cancer (Yea those are real things bees can do )

Sting
Im sure you have heard at some point someone claim that bumble bees don't sting. WRONG BUMBLE BEES CAN AND DO STING (well the females do.) and if you are allergic to honeybee stings it's almost certain that you are allergic to bumblebee stings too. Fortunately like the honey bee they sing rarely. also like honey bees the male drone bees have no sting. The sting is a modified female reproductive organ so the guys just don't have them. Unlike the honeybee however the bumblebee sting has no barbs on it so the bee is able to remove the sting from the target and sting repeatedly. 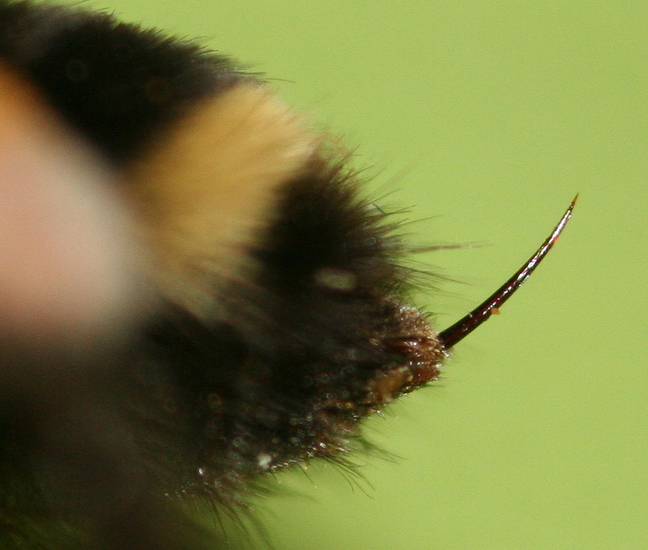 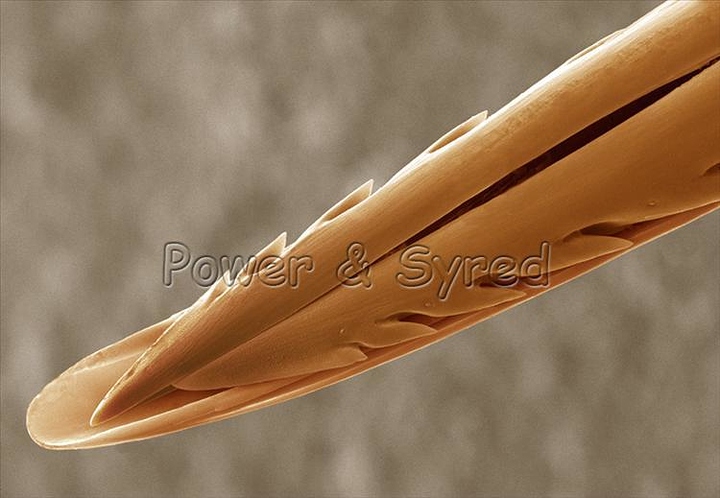 Yep, people do it. and it's very easy people only keep bumble bees for pollination they don't produce enough honey for harvest but will make a huge difference in you garden. Because bumbles are not plagued by the same types of mites and pathogens currently afflicting the honey bee they don't need the human intervention that honey bees do. You can go scoop up a bumble bee nest and put it in a new container in your garden, or order a colony online that comes in a container already. set them in the garden and basically forget it. You can also capture a queen in the spring and house her in a closed container with some food and water and let her start to build a nest then open the door and that's about all you need to do to keep bumble bees. 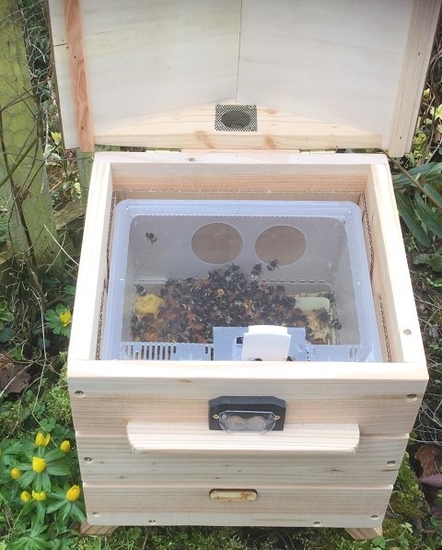 Going to give this a thorough reading. Always been a bumble bee fan.

Hope you enjoy it . I do have to go back and make some edits but not tonight.

nice read, interesting to see how other types of bees "do it"

This Thread is Beeutiful!!!

cleaned up some typos and junk. writings not actually my thing

I'd argue otherwise. I enjoy reading your funny stream-of-thought interludes which feel so different from the standard Internet forum post style.

Great article. I knew just about none of this, so there were a lot of interesting takeaways. I'll try to think of some questions and get back to you.

Thanks @_Alamar I meant it in more of a scene of mechanics sort of way. But I do appreciate what you said and I am glad you enjoy the posts if people keep liking them I will keep posting them.

Always been a bumble bee fan.

You should get some then

Here is a poorly made video from Youtube that has some good instructions.

@Tmurder in your thumbnail it sort of looks like your holding comb but i see it appears to be some sort of 3d printed lattice.

I need to find a 3D printer that prints with wax so i can print frames of drawn out comb and save the bees the trouble and resources.

That would be awesome. I would host bees, but my neighbor hood is too dense and I am far too busy for upkeep. When I get a house out in the country side ill work on it, but that might bee a while.

Oh no man urban beekeeping is the way to go IMO are you in a city or the burbs? No great expanses of Monocultures less prolific use of pesticides in some cases fewer pests and predictors. Let me know and lets talk about urban beekeeping.