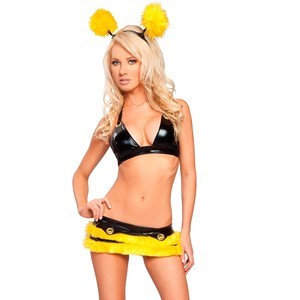 It's a beautiful warm day in early summer. The sun is shining the birds are chirping. The sounds of children playing in the distance carry to you on a pleasant soft and gentle zephyr. You are walking along with your special someone, going on a picnic, or maybe the two of you are searching for that illusive geocache. Then that’s when it happens as the two of you break the gaze into each other’s eyes as a tiny bee flies past the two of you snatching your attention. You watch as the gentle creature swoops by emanating a soft buzz that embodies the feeling of that warm summer’s day. She eloquently drops from the air to dance across a flower and that's when it happens. your jaw drops and you partner grabs your arm and pulls you close for comfort but neither of you can look away. You are completely captivated by the little flying creature’s conjugal visit to her silk petaled partner. The perennial porno that plays out in front of you is like something from scenes on a DVD you once found under your uncle's bed when you were a kid. 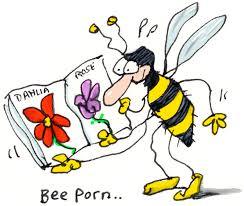 The common line you hear from your beekeeping books and classes is that the only bees that mate are the queen and a small number of drones. Oh but they are wrong oh so wrong oh so wrong. You see the world is often only the way it is because you look at it that way. If you were to ask most beekeepers or bee experts how honey bees mate they would tell you that only the Queen mates and that she leaves the nest normally one to four times at the very beginning of reign and they will tell you that only a very small portion of frones will successfully pass on his genetics to a queen. and that statement would be correct. If we were talking about honey bees and we were talking about bee sex but in today's blog we are talking about pollination and we are not limiting ourselves to honey bees. This is after all BeeSyndicate not Honeybee Syndicate. So dimm the lights and shut your door put the browser in Incognito mode because we are going to talk about sex by’bee let's not talk about you and me. Let’s talk about all the good things and those bad bees and the flowers. Yes, let's talk about sex by’bee. 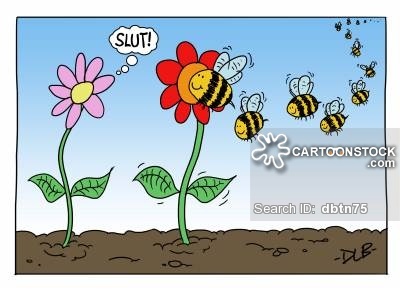 Yes, I’m talking about pollination. What is pollination how does it work? I’m the simple answer is that pollination is sex for plants. one of the primary goals of every plant and animal is to advance the race by producing offspring. (except for pandas apparently) There are two types of pollination.

The first is Abiotic this is pollination that happens without the assistance of another organism It is commonly referred to as Wind Pollination because it is often the wind that carries the genetic material to other plants for reproduction. only about 20% of flowering plants pollinate this way.

The Second type of pollination and the one that we are most concerned with in this blog is Biotic. This is when another creature (In our case bees) transfer pollen from flower to flower thus preggerizing plants.

In both Biotic and Abiotic pollination male microgametophytes of seed plants “pollen grains” (“Plant ***sperm” OK so it's not exactly like sperm but it does the same job) gets moved from the male part of the flower (The Stamen) to the Pistil the female part of the flower. this enables fertilization to occur and a plant seed can be formed.

***Pollen itself is not the male gamete.[1] Each pollen grain contains vegetative (non-reproductive) cells (only a single cell in most flowering plants but several in other seed plants) and a generative (reproductive) cell. In flowering plants the vegetative tube cell produces the pollen tube, and the generative cell divides to form the two sperm cells. Pollen is a fine to coarse powdery substance comprising pollen grains which are male microgametophytes of seed plants, which produce male gametes (sperm cells). Pollen grains have a hard coat made of sporopollenin that protects the gametophytes during the process of their movement from the stamens to the pistil of flowering plants or from the male cone to the female cone of coniferous plants. If pollen lands on a compatible pistil or female cone, it germinates, producing a pollen tube that transf...

Beyond just populating the earth with exact copies of an organism over and over again nature tries to advance the species through evolution and the best way to accomplish that is with an exchange of genetics between parties so that beneficial traits can be passed along and weaker traits can be slowly left behind. Nature has cleverly built in incentives for encouraging organisms to engage in this exchange. If you are unfamiliar with what these incentives are for animals like people I suggest you ask your parents, or at least ask google for some Idea. (If you do ask the google don't forget to turn the safe search on or you may get a pretty unrealistic idea about it and chances are you will wind up disappointing someone one day. In all likelihood that someone will likely be you.)

In the world of flowers however the incentives have to be different. Because Tinder has much more terrifying connotations in the plant world than a just a swipe in the wrong direction.
flowers can’t just hook up with other flowers at the club and unless you live in middle earth plants have a hard time going anywhere. So what's a firmly rooted rutabaga to do to get some action. They let the lovin come to them. They put on a the sexiest outfit they can manage and with as amazing as flowers look to us they look even better to bees. Because bees see a different range in the UV spectrum flowers look even more attractive to bees. 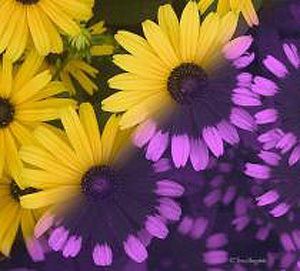 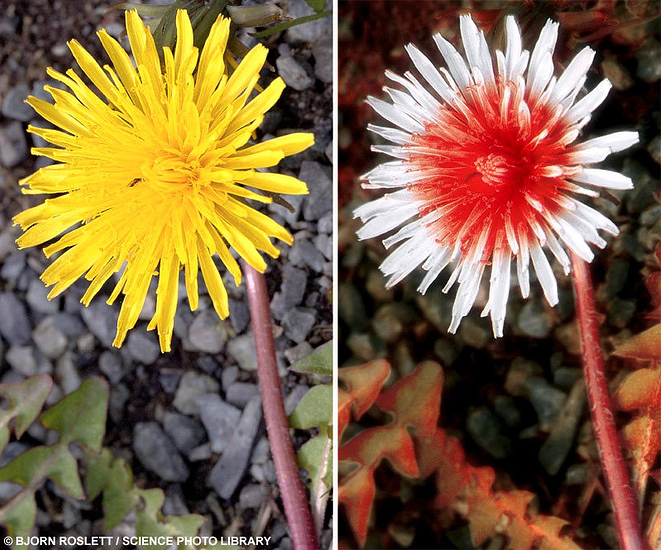 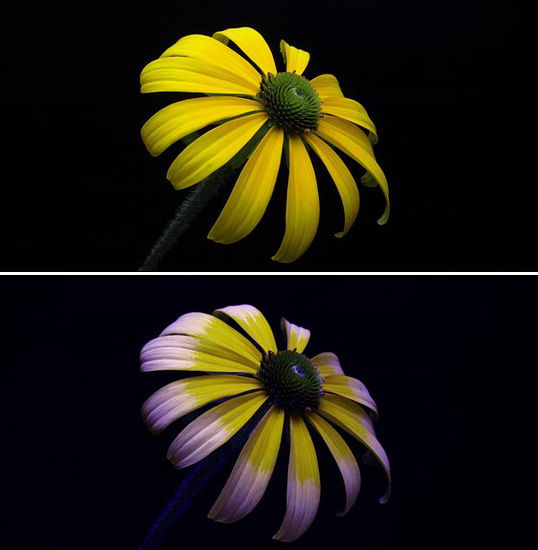 Once the flower has lured it’s local pollinator partner (in this case a bee) the bee rubs its body on the sexual organs of its party time playtime plant partner during this act genetic material is gathered and deposited from the bee to the flower from previous blossom buddy and to her next floret flame all the while gathering plant protein and procuring sweet nectar with her proboscis. How could you describe this dance of flora fornication as anything but sensual. The honey bee is a fleeting but furious lover for her botanical beloved. 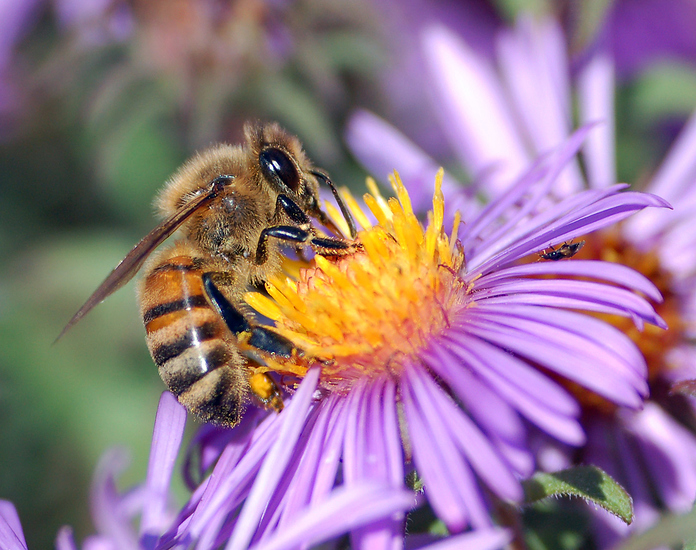 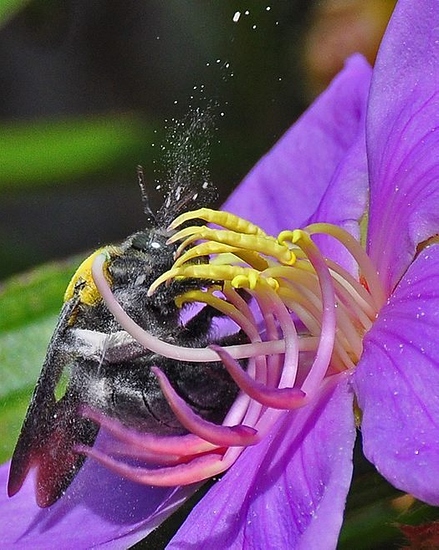 A buzz pollinating bee like the Maine Blueberry Bee and a few other solitary bees will press his or her face into the opening of the flower and uses sonication to release the pollen from the flower basically (Sonication is the act of applying sound energy to agitate particles in a sample) in bees this means that the insect buzzes at a frequency that causes the pollen to fall onto its face for collection and transference. this makes buzz pollinators well suited for pollinating these more puritan plants.

The Maine Blueberry Bee is now being commercially used for pollination in some places just like the honey bee. Because of the struggles faced by the honey bee and a constant need for efficient pollinators other options are being explored. One hive of Maine Blueberry Bees will increase the crop output of 1 acre of blueberries or tomatoes about 1000 pounds. 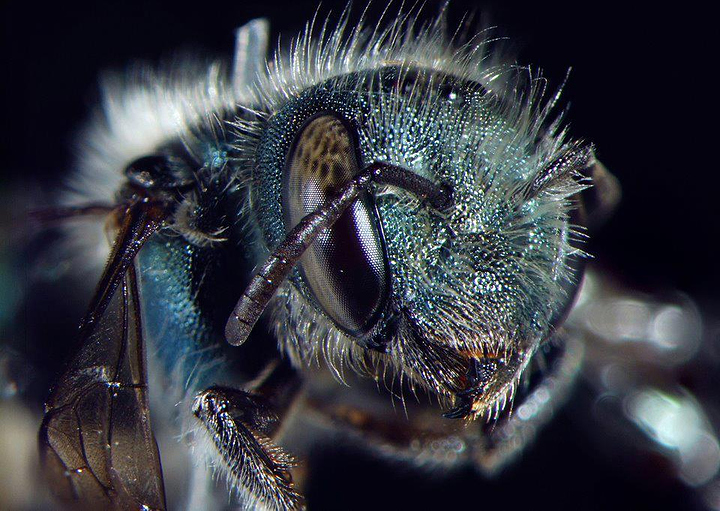 do bees that are not honey bees feed on nectar from flowers or do they have their own type of "honey" that they feed later on after processing it as honey bees do?

Yes, Most solitary bees still feed on nectar, honey, and pollen. its just that they don't live communally in the way that honeybees do and don't create large stores of honey.

I had no idea there were so many intriguing bee costumes out there. Thank you Bee Syndicate. I'll bee sure to have my feelers out for any future enlightenments.

The honey bee is a fleeting but furious lover

Yea ,well you know got to give the non-bee people something to keep then interested.

But we Love the Bees.
I might not be able to keep honey bees anymore, but maybe I should try Bumble Bees

I'm glad people here love the bees! and I thank all of you for reading my blog and leaving comments. and maybe this article was a little click bait-y but I'm just hoping to draw in some more people and spread the bee love like so much pollen.

Keeping bumble bees would be great! They are amazing pollinators (better than honey bees in some cases ) and have greater tolerances for low temperature I don't know a ton about them but give me a few days and I will be well on my way. Defiantly this will be a blog post about keeping honey bees. I have been wanting to do this for a while so probably its about time. so keep an eye out for that!

You beat me to it. I was just about to post that exact link.

Glad you enjoyed it ! If you havnt checked out the rest of the blog give the link to the main post at the top of this one a click. It links to all of the past posts.

@Yea_boom I remember that you said you had to get rid of your bees because of a concern over a family member with allergies to stings. Now I know that alot of people think Bumble bees don't sting. This is not true The just rarely sting however the same thing could be said of honey bees. The difference is that the Bumble will not leave her stinger behind with a pumping venom sac. Some venom is injected at the time of the sting. If someone is allergic to honeybee stings It is very likely that in fact almost cretin that if you are allergic to honeybee stings that you are also allergic to bumble bee stings. The venom is similar with bot bees the difference will be the dosage.

All that being said @Yea_boom because and If i recall you are in New Zealand. you might be able to get some of these

Trigona angophorae Cockerell, T.D.A. 1912 Tetragonula carbonaria (previously known as Trigona carbonaria) is a stingless bee, endemic to the north-east coast of Australia. Its common name is Sugarbag bee. The bee is known to pollinate orchid species, such as Dendrobium lichenastrum, D. toressae, and D. speciosum. It has been identified as an insect that collects pollen from the cycad, Cycas media. They are also known for their small body size, reduced wing venation, as well as a highly developed ...

or some other type of sting less bee

@Yea_boom you ok after the quake? just saw it on the news.

Na didn't effect me.
I'm in Wellington. about 400KM north