AM5 for Home Server - What Motherboard Say You?

Suggest a Motherboard – I’ll get it

So these CPUs at CES that are non-X. I am thinking 6 or 8 cores for a home server kinda deal, but also low power/sleep modes/etc. What might a good microatx board be? I’d love 6 or more SATA ports, many M.2 and as many full-size slots as possible. 2.5gb or faster onboard nic.

Has anyone seen anything really awesome? Ideally microatx but I’d take ATX as well I suppose.

Bonus if it can do ECC DDR5.

Link what you’ve seen, and heart anyone with a board someone else posts you think is cool. I’m going to try to get a few of these.

I’ll probably pick up a “budget” (pcie4) board thats oem or cheeeeep then do the off-label m.2 coversions or a bifucation adapter + the “serverish” options.

Thinking about posting some 3d printable files/adapters for cases like the pop air/uatx to make them suitable for “cheap low power home server” as the uatx version also fits nicely sideways in a rack.

Asrock taichi due thunderbolt is a benefit. A board with 2.5 or 10gbit is ideal. Or dual nics. Im using my x470 3950x as a proxmox build. Im usually more prone to repurposing old hardware for vms and container use.

got your 10gbe, ddr5 ECC but only 4 sata ports and bugger all pcie slottage

i expect the price to be eye watering

the market segmentation for am5 at the moment is just silly

Im currently trying to acquire some Asrock Rack B650D4U in Various Configurations, but it seems hard to order.

Hoping to get these around 260USD Wholesale Price, but I dont know if this is realistically possible.

I was just curiously looking at the Asrock Rack B650D4U-2L2T/BCM, which is the most featureful Asrock Rack offering, but to call it featureful is a bit of a stretch since it’s expansion options are pretty anemic. It does have dual Gbps and dual 10 Gbps ports, but with only 4x onboard SATA, a single m.2 slot, and one each of x16, x4, and x1 PCIe slots. The slots (m.2 and PCIe) are all PCIe 5.0 though, so if some nifty expansion cards that actually take advantage of PCIe 5.0 speeds hit the market it may be worthwhile. Will likely be overpriced and sold out everywhere for awhile though, just like the previous Asrock Rack Ryzen boards.

Explore using a M.2 to PCI-E riser cable and a Startech 8 port PCI-E card. That’s what I plan to do for my array. 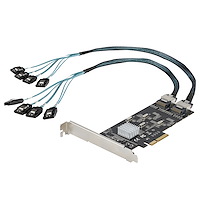 Definitely would like to see a review of the mATX boards ASRock offers from B650 (Oddly no B650E mATX) for use in homelab and VFIO. https://www.asrock.com/mb/AMD/B650M%20PG%20Riptide/index.asp

Wait a minute, the current B650 Asrock Rack offerings have multiple USB ports now? That was my main gripe with the previous X570/B550 generation…

I haven’t really been paying too much attention to AM5 since I steeled myself with the AM4+X570 board ecosystem for years to come, but the dearth of USB means I have to use a separate PCI-e USB controller. And it’s in an x1 slot, so I can’t use one of the x4 cards with multiple controllers to split up for use in multiple VMs. If the B650 boards are getting these I/O upgrades, are there possibly X670 boards in the pipeline with a similar design?

The addition of a DisplayPort also looks very interesting. It might even co-opt my need to use two discrete GPUs…and with the addition of extra USB, maybe there’s even a mini-ITX X670 board that could functionally replace my mATX system and allow me to go smaller? Dang. I guess time will tell.

Thank you for the link.

I’m personally waiting for the Phoenix APU to land on the AM5 socket in the next 7000G series since it’s clear Dragon Range is just a BGA version of a regular AM5 CPU.

Has anyone seen anything really awesome?

Answer is easy: No!

Low power seems to be a big issue with DDR5 / PCIe Gen5 technologies at the moment. 2.5GB/10GB NICs don’t help either, but each (depending on individual requirements for home server) are required to provide that “generational improvement over AM4”. Why would I pay a premium otherwise?

Within this set of requirements I am currently looking at: 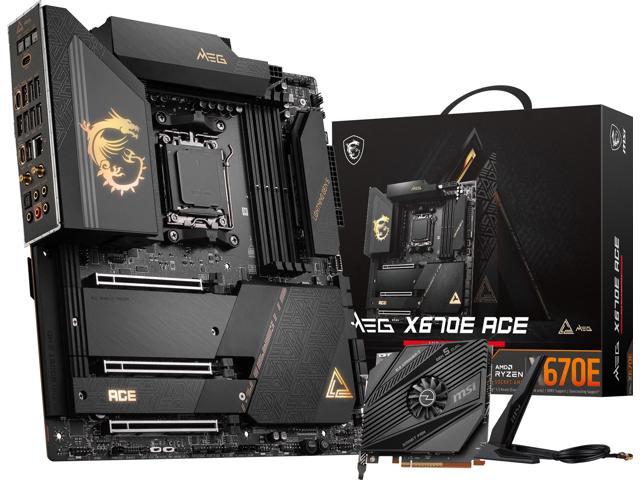 Ive been looking for something , all the while hoping something new is released (since the AM5 servers stuff hasnt hit newegg/amazon yet)

I try to stick to mATX also… and so far I havent seen one , so i havent gone for it yet… and my 7950x sits unopened in the box.

But for atx and eatx these seem to be the ones ive been looking at. (the pcie slots seem to be ideal to me)

I know there are some asrockrack mATX coming soon, so im trying to hold out.

But strictly mATX… at the moment Id go with : ASRock B650M PG RIPTIDE AM5 Micro-ATX

And yeah there is also the Msi X670E Godlike.

However that board is soo ridiculously expensive that it ain´t worth it imo.
And i don´t think that Msi even cares about ECC support.
Same thing kinda goes for the ACE too expensive for the actual features it offers.

However that board is soo ridiculously expensive that it ain´t worth it imo.
And i don´t think that Msi even cares about ECC support

ECC on consumer parts is kind of lame tbch. ECC with rdimms is a server thing so you won’t see it on the consumer grade stuff. If I was going ECC it would be rdimms or bust

And yeah there is also the Msi X670E Godlike.

However that board is soo ridiculously expensive that it ain´t worth it imo.
And i don´t think that Msi even cares about ECC support.

I’m interested in similar boards. Have you found IOMMU grouping dumps anywhere for the MSI X670E Carbon Wifi by any chance?

Hard sell for anyone looking to run Plex. Only one GPU or SAS Controller. Wish there was still SLI boards so the second PCIe slot would be gen 4/5 x8/16. x4 is a deal breaker.

I wish someone would make a board with either:

Looks really good! I’d like dual 10Gbe, GPU and SAS controller. Not sure how that would work without doing a m.2 SAS adapter but it would be really nice to have the M.2 for a cache drive.

Love me some Linkreal products for NVME

AsrockRack does have products announced for boards:
ASRock Rack > Products

But I can’t speak to their availability.

Since I like the AM4 version very much (ASUS ProArt X570-CREATOR WiFi) I’m going to look at the ASUS ProArt X670E-CREATOR WiFI when the 7950X3D becomes available locally with 4 x 32 GB ECC Micron DDR5-4800 UDIMMs.

But I’m a bug magnet so I’d be very appreciative if I had a competent third-party control user to iron out the likely BIOS issues with ASUS’ support to get this motherboard in top shape as soon as possible.