Now as of now I have not donated money to Patreon or bought something on the store and so I wonder since I don't use AdBlock how much money am I contributing per month by viewing all your videos? Just curious. :S

Nobody thats partnered on youtube is allowed to really reveal any of their revenue numbers....

I found this site a long time ago that told an estimate of how much a youtuber made and it even broke it down per video. I remember looking at Linus and it said something like a million dollars per year. And I thought that that was wrong, but looking at his videos, you can see his house and I suppose that a million per year can not be too far off. I will see if I can find that site again.

The site seems to have changed from them it does not look like it breaks it down per video anymore.

Output for Linus' videos: No offense( probably spelled that word wrong ) to him or any one else that does video reviews, but are they really earning money. I know that they get money, but are they really earning it. How hard is it to ask the manufacturer for hardware get it, read off the spec sheet, say its good and get views, not really that hard. But if I were in his position, I would not really be thinking about if I were really making it ( the money ). Its like camping in video games, if you do it your happy, if it happens to you and your not camping you get pissed. I am not making the money he is and I post this.

And another piece of circumstantial evidence.

During a PGP stream someone donated $10 because the used adblock and wanted to give back. The response from Wendell was well you have paid up for life, something along the lines of $10 from one person is worth several people watching ever TekSyn video a few times over

So in short not much.

I checked howtobasic on that link. It kinda blew my mind.

At best that site's 'revenue estimate' is just that a guess, but I suspect the true monetary values lie somewhere between.

I gather the site just gives Youtube viewers an 'approximate' look at revenue generated by their favourite channel. 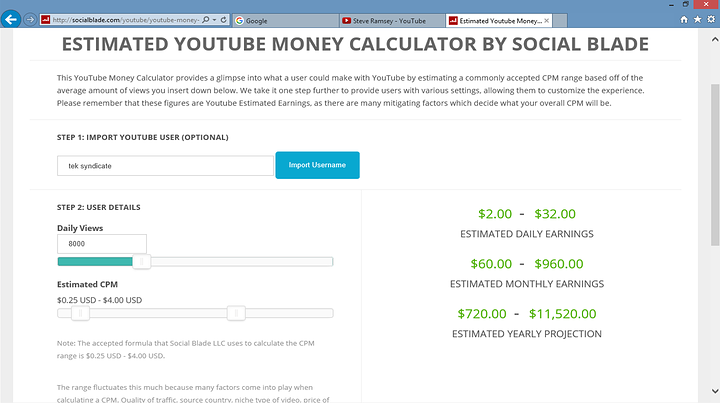 They're one paycheck from hosting the show on the street

Let's put it this way, typically youtube shells out money in a per thousand views situation, with several factors able to influence how much per thousand it seems. Possibly some of the bigger or older channels work out more particular and better deals, I don't know. But, to give a rough idea, Blip used to shell out around $20 per 1,000 and this was the largest reason why certain big internet video makers stuck with it rather than going to youtube where they would get more views, because that was insanely high in comparison.

However, I've also heard that fairly recently youtube has changed many aspects of it's revenue and advertising model in a way that has resulted in a lot less money for many youtubers (it's changed a few times, but recent ones seem to have caused significant damage to some anyway), so older information may be less valid now.

Yes you can. Theres no where that states you can't people just don't go around saying how much money they make because its personal information.

Youtube money is shit 10 bucks every 100,000 view around that. Only way you can make more off a view is if a user watches a long add then goes to the add site.

NDA's are a thing dude. That's why the range on those prediction websites is literally thousands. Some people make less then a dollar per thousand views and some make $10. We don't know how much Tek makes and they are not allowed to tell us because they signed a contract with partner that says they can't open the books to the public when it comes to YouTube.

My youtube account is partnered and I never read that...Well I never read anything and barely use my Account till this day it has no direction aside from just posting stuff for the sake of posting. The difference in money for views depends on the difference in the type of adds youtube puts in the video which is determined by something idk.

tl;dr become a Patron and/or Tek Support member if you can :D

Becoming a patron member has sort of made me more active to make money to make sure I can contribute each month.. Like some sort of sick game, but its for a good community.

I can say this much for my channel. I barely make enough from YouTube to get paid with my ~2800 views per day. (Yes my channel is small). An overwhelming majority of my income actually comes from Amazon and when people use my Amazon links. It's on a magnitude of 3x to 4x more pay than YouTube. If you want to really support them, use their links if they have any, or buy from their store. (Or Patreon)

I think I will go the Patreon route eventually but is there a minimum for it? Also does Patreon take a huge cut?

Minimum is $1 per month I believe. I don't know how much of a cut they take. I setup one for Tech-Know Scope, but I never actually introduced it to my viewers.

Eh gave the minimum to Tek Syndicate and Jim Sterling as it was about time I started giving them money for all the entertainment they give me. Thing is though there is this talk of them hating censorship and I come back to find that one of my threads was shut down. Now yes I don't mind certain things in society not being allowed and people stopping certain things but I find it funny that as soon as I started giving them money I see censorship here which is nothing I ever expected to see from Tek Syndicate. LOL!

Ad revenue is inconsistent and some channels do better with ads than others. Please keep that in mind as I go forward.

In general, ad revenue is paltry. Even $1 from one person is definitely more than I would make off of a single person in a month.
I've been monetizing my videos for about 4 months now, we'll ignore my main content because sadly - even though it's my main content - it's largely the most unviewed.
My Black Desert Online review, on the other hand, while, it's view count is a drop in the bucket compared to most large Youtube channels, still has 25k views on it. It has roughly earned me 90% of my total revenue.
I want you to keep those numbers in mind as I explain how Google pays youtubers.
Google will not pay a check until a certain threshold of total revenue (after Google's cut) has been earned. The lowest minimum amount you can set for this threshold is $100.
In the 4 months I have monetized my videos, I have not yet received a check from Google.
I'll let you guys put 2 and 2 together.