I currently have two of these systems, see configuration below.

Currently I have an issue where the motherboard seems to loose all the m.2 drives or not know which one to boot to.

Boss is ready to beat me silly over this, any assistance would be appreciated.

So no drives show up?

Try Re seating the CPU, could be making bad contact

before seeing your last post I moved the (OS) M.2 that was on the motherboard to the PCI express card.

It booted up fine & on multiple reboots as well.

left the machine up for the night & lost all video had to reboot.

On the other workstation windows freezes then BSOD -WHEA_UNCORRECTIBLE ERROR

So both of your systems have issues?

Correct both systems are having issues

Wondering if the systems are under powered. specs listed below are for two workstations

Why did you go two sticks and leave all that bandwidth on the table?

for now. what ever he ordered is on backorder for the next few weeks.

so I think you’re having pcie errors like me!

there is a firmware update for the 980 pro NVME

do not do the firmware update in this system!

Do it in another system.

PCIe4 is really really specific on this system. And verymuch ‘thread the needle’

The 980 pro is the culprit?
Weird the drive with my OS is the crucial NVME 250GB

For a moment I was thinking the issue might be a backwards compatibility issue with the older gen crucial.

Also I only have these two systems, haha.

So were stuck without a system?

Do it on any other system with nvme slot you can upgrade the firmware on.

dont use the wrx80 if possible, dont you have something else you could update the nvme in? if not then please use the on-motherboard m.2 slot closest to the cpu to do the firmware upgrade

also, and this will probably sound weird, but the aic card that carries 4x m.1, just put it in the first slot of that in the top slot of the wrx

that location and the closest m.2 to the cpu are probably the “safest” slots to do the firmware upgrade

Just picked up an external m.2 enclosure to upgrade the 980s. I pulled out the aic card earlier but the system still won’t recognize the onboard crucial it’s located in the M.2_1 slot.

Also wanted to say thanks @wendell & @mutation666 for assisting!

you ddi get the april bios update too? it really helped me a ton

Did it earlier in the week 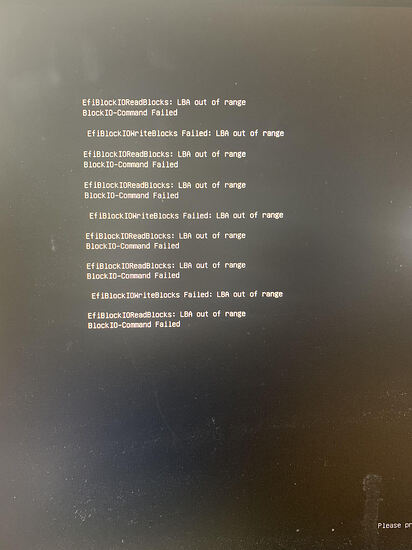 after the fw update you may have to reinstall/fresh format/etc.

once you do that you can run dmesg to see if you see anything from the kernel about pcie bus errors.

Still can’t get the bios to read the onboard M.2.