Of what I have seen some people like CRT monitors. The only good thing about them is the price. For me I'd rather not have 3 20 pound monitors on my desk in case something bad were to happen with them. You can't vesa mount them which sucks. Just give me reasons why CRT's are good, and things like that, people that prefer others, give your reasons also.

No one likes CRT Monitors. the only reason someone may like CRT monitors is because they technically have infinite bandwidth and don't really have a native resolution so you can run absurd resolutions with high ass refresh-rates. however the only reason this is possible is because the signal is Analogue. Analogue signals are for all intensive purposes dead. unless you live in the stone age. most if not all TV's and monitors come with HDMI and or Display port.

Oh no.... I can see who's going to hijack this thread. lolz.

I'm trying to have some modicum of hope. but hopefully the thread doesn't end up going in the direction we think it will.

ppfft. The eye can only see 24fps's

Who is it that you guys are talking about? 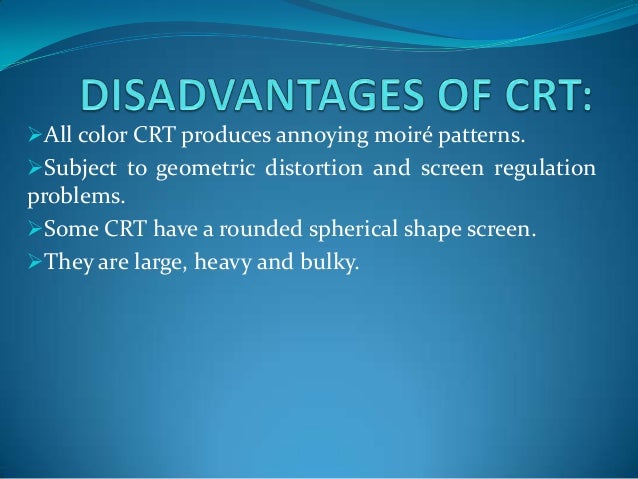 Always adjusting them, because someone thought it was cute to make one side small or half the screen is missing or everything is one color.

No, take your CRT of death (literally capable of death) and leave me be, good day sir!

but then console overlords hate us, pc peasants :(

No one worth talking about.

Great response time and refresh rate, higher vertical resolution than 1080p(assuming a 1600x1200 you set to a higher rez), and they have pretty solid color, especially the black levels.

Until OLED comes down in price they're still the best.

So if price were not a factor , you would say OLED is better?

THey are still working out some Life issues with pixel life and mass consumer production, but generally yes.

apparently they can also be subject to burn in, (so are crts) but I presume this will change as the tech advances (recent good crts don't really have this issue)

This is my source off hand. Funny though, most of their negative points are "it's a TV and not good enough... dang"

If I could find Trinitron flat-screen CRT's for cheap, I'd probably still be using them.

ppfft. The eye can only see 24fps's

I don't think that's technically correct. Eyes don't work like monitors with refresh rate and stuff. However, don't take my word for it:

As soon as the tech matures a little more, though I still wish most companies made CRTs, you can't use an OLED display as a heavy thrown object.

I thought a /s wasn't needed...
I posted that comment in satire to Cyklon's exclamation (!) at high refresh rates

Yeah seems like I forgot on which forum I was. This pretty much is a condition from replying to YouTube comments. Sorry.