Why are laptop CPUs not replaceable?

So are laptop CPUs not replaceable, like normal desktop motherboards, because of vibration and moving it around the CPU would move from it's place?

Would it be from an engineering standpoint possible to have a CPU module like RAM? I know that the PCBs have multiple layers now but any ideas? This could reduce the waste of screens and keyboards and will help by avoiding the "Intel Problem" changing the socket so often.

Its cheaper, it will have a lower profile, and it simplifies manufacturing.

From an engineering stand point, it makes a lot more sense to solder it to the board.

There are actually some laptop cpu's that are replaceable as in they are socketed and technically can be switched if the motherboard supports whichever cpu your putting in. There are a couple reasons this isn't very popular to implement or do.

Would it be from an engineering standpoint possible to have a CPU module like RAM?

At one point in time, that was a thing. 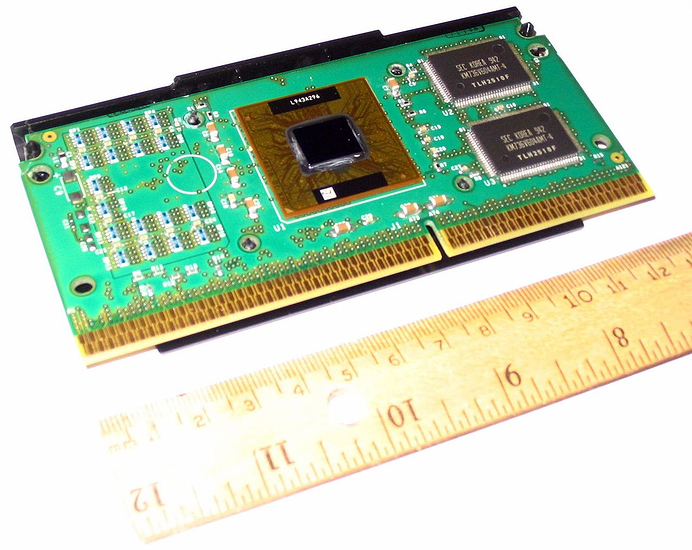 Above is a pentium 3.

There are a couple reasons this has been gone away from.

Interesting I didn't see one like that before.
I understand that you would not be able to put one of those in a macbook air but how about gaming laptops? Would it's socket be larger or different than sodimm in laptops?

For example a workstation or gamin laptop could have those things removable, not for the mainstream users. I would not mind upgrading my thinkpad to a higher processor if I could but I guess technology is so fast that it would not matter anymore.

The fact that intel would not sell you cpus is true. but the manufacturer could be making those modules for people and create Long Term Support models. Especially in the business world I believe that companies would opt for the upgrades instead of buying new machines.

This is the CPU from my first laptop. That laptop was an inch thick and had a model that had a floppy drive.

The problem is that it makes the laptop much thicker. Just the CPU is a quarter of an inch thick. There are some laptops now that are only slightly thicker than that. 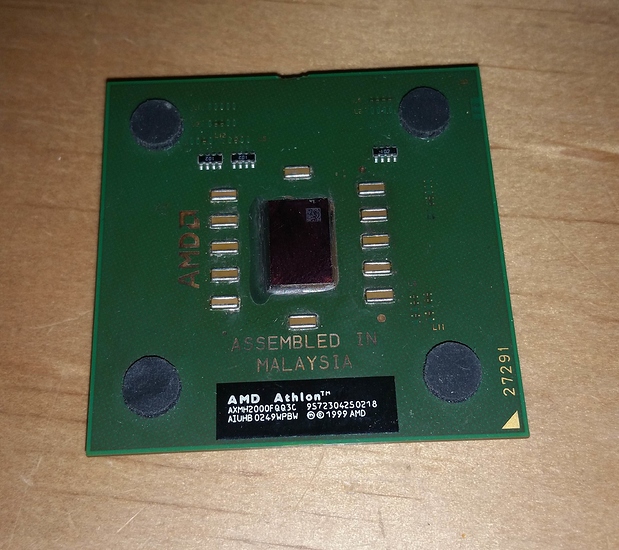 Hp probooks use to have replaceable CPUs. I have the 4540s that came with the i5 but as prices have come down I have replaced it with an i7 and swapped the HDD out with a SDD. Its like having a new machine.

I do wish that you could swap GPUs, that would be a nice upgrade for a laptop.

It's funny that a thread like this pops up just after AMD and Intel have switched to almost entirely BGA package mobile CPUs.

The truth is that for the last 15-25 years laptop CPUs WERE upgradeable and were socketed in their own specific configurations just like desktops. Sockets like PPGA495, mPGA478, mPGA988(G1), FCPGA946 for Intel and PGA754, S1, and FS1 for AMD. If you own a laptop from 2015 or before than chances are high that it has a socketed CPU and can accept an upgrade of the same generation. Netbooks, small convertibles, and some very low-end mid-size machines may still have a BGA package CPU soldered.

Also companies like Clevo make extremely high-end laptops with desktop sockets in them, for that extra step in performance and flexibility.

You can normally install a selection of compatible mobile CPU's in a laptop. But normally only a select few, sometimes you can get lucky and a laptop that only has a dual core can take a quad core.

some are replaceable (actually most are) problem is that few people know how.

Its cheaper to produce fully integrated boards 'en masse' rather than allowing for poorly applied thermal paste, bent pins etc... quality is always better when machines are working, rather than humans.

There is also the aspect of transportation costs that are also lower when things are fully integrated. The less the potential moving parts, the cheaper it is to transport.

You go to the store and they put whatever you want in it right then and there in 10 minutes. They will need minimal training. Then we solve the transportation problem, we have customisability of a standardized enclosure with a motherboard in it.

It will not look like a Mac but who cares?! Things are getting smaller that's for sure but better will always be bigger, no pun intended.

You go to the store and they put whatever you want in it right then and there in 10 minutes. They will need minimal training. Then we solve the transportation problem, we have customisability of a standardized enclosure with a motherboard in it.

Think about the market they are catering too. The prime customers are the soccer mom's of the world, the regular guy that works some blue collar job. 98% of consumers are not in fact looking to put some specific cpu in there, nor do 98% of consumers know what different model numbers mean or what impact a better cpu even has. People just want something that looks pretty enough and works, which is why Apple is so successful. The consumer base heavily sways to people that don't that hassle, that just want to walk into a bestbuy and be told what to buy for their money. In and out fast, as painless as possible. Yeah its cool for people like us that will know what the actual difference is between an I5 and I7, but for the average joe its added confusion and added time.

This is a thought experiment I don't expect to be right, from a marketing or engineering standpoint, I am just on this site of the argument :p

What if it was actually cheaper and more convenient? By having 3 - 4 types of laptop chassis and motherboards that go with, and a large number of parts available the company would not have to waste space stocking 150 different laptops and never having what you want. This would also call for premium service and there is room to charge people because they already buy x5 the price from Apple.

The VW Group does this with their cars. All tho some manufacturers in the group do decide to go their own way and create their own chassis, suspension and stuff. On the cheaper Audi's, the suspension,engine and other parts are VW parts.

HP and Compaq did this as well in the computer world on some series of laptops/desktops. So if you did buy a Compaq, you bought a computer that has a motherboard from HP, that was used in an already produced HP model, but the outside chassis was slightly different. HP also shared its keyboards with Compaq.

My laptop has an i7-4702MQ - it's physically identical to its HQ counterpart except that where the HQ CPUs are soldered to the board, MQ CPUs are socketed, so they are removable.

But as others have said, they're mostly not replaceable just because of the extra manufacturing costs associated with making socketed laptop CPUs, especially since the vast, vast, VAST majority of laptop buyers (i.e. the clueless zombie masses) aren't going to want to fiddle around with replacing the CPU if it dies - they'll just buy another laptop.

I fully get the need to solder parts to improve form factor and cost considerations. I actually appreciate that in my basic business laptop that I need for travel. My back appreciates it too.

That said, I would really like a more fully modular laptop platform based on a more open standard for enthusiasts. Considering how large many gaming enthusiast laptops are, I don't see why this isn't a thing. Considering how manufacturers are cramming near full desktop grade components in their laptop designs these days, there's no real technical barrier to this and laptops would be in direct competition for the desktop market if they could match the modularity and upgrade ability at least in part.

I suppose it's one of those things that manufactures try out for one reason or another. I read a few of the replies and I think most of the topics were covered. If you have a thin laptop then it's probably soldered in otherwise the option to replace and upgrade is there.

I recently upgraded an old Dell Inspiron 1545. If I had maxed it out with new replaceable parts it would have cost more than buying a new one. Instead I backed off the upgrade components and spent less than $100 for a solid general use machine. Trying to play modern games on this thing is a joke but as a mobile device it is fine.

It's mostly to do with manufacturing costs and also the fact that most people don' t upgrade there laptop and you it could create problems with power delivery and consumption.

It would not be as thin as pc with everything soldered and non-upgradeable. Most businesses care more about function not form. And function for money to be more precise

It's mostly to do with manufacturing costs and also the fact that most people don' t upgrade there laptop and you it could create problems with power delivery and consumption.

Couldn't you overcome power delivery by cleverly engineering the motherboard (don't allow the bios to boot the machine unless it knows that chip) to verify the cpu and the other removable components before giving them power and check compatibility? If you have a cpu module you will be able to overcome the changes of sockets Intel does every other cycle and you would be able to put other components on the circuit to make it compatible for the rest of the motherboard.

Ok cooling is an issue but if the position of the chips on the modules does not change it would not be difficult to put thermal paste and reattach the heat dissipation mechanism.