Which UBS 3.0 Bottle Opener is Better?

We have two different USB 3.0 bottle openers we are thinking about Which do you prefer. We are going to do 32 and 64 for the storage. Is that too large or good? 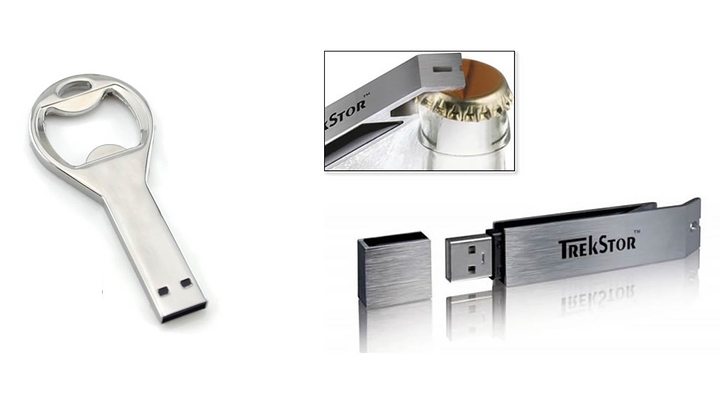 Also, let me know if you think you would buy one. Imagine our logo laser etched onto it. I think the prices will be $25 and $39. That is not certain yet.

I was leaning toward the one on the right... but the rounded one will work on a keychain and is better for opening beer. So, which one?

Overall, the one on the left is easier to handle and open bottles with, from my experience. However, it's easy to contest that it's just as easy to open bottles for the one on the right and I like the security that comes with having a cap on the USB while you're using it as a bottle opener.

I'd prefer the one on the left just because its easier to open sodas with. Plus I can put it on my key chain.

One on the right. Far less generic and protects the business end. Would be good if it had a key ring though

You could probably just hot glue a half-circle onto the cap and use that for the key chain if the cap is tight and strong enough. That also makes it so that your USB isn't weighed down by your key chain when in use. 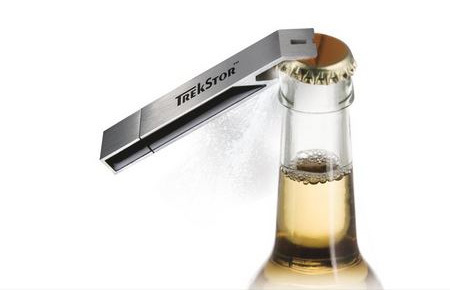 I was going to say the one with a beer. Changed your pic and beat me to it.

I like the looks of the right one better, but: whichever one is faster is the better stick... Because I have had everything from slower than USB 2.0 to super fast with USB 3.0 sticks. And the slow ones are annoying.

I think the right one looks more sleek and professional. The right one, definitely

The round one for me personaly.
I think it realy looks cool.

I vote left. Looks good and I like when USB sticks use the USB port connector as a structural part of the body - as long as it is well-made. Also 32 and 64GB are perfect.

I prefer the one on the right. Two reasons, the first being that it looks better. Second reason, i've seen a couple of models that look pretty much the same as the one on the left and a lot of them had the USB end bent, so it didn't go into a USB slot anymore.

The round one, since any flat ones I've used suck.

The straight one in the right. It has a cap, it looks good, it won't block other ports and I won't looks like an alcoholic booting up Linux in public.

Although I agree the straight ones usually are terrible for opening bottles.

Also 32 and 64 are fine as long as they are actually fast.

The one on the right looks to have a slot in the middle for a lanyard thing so it can still be usen on a key chain.

I like the edgy one. Stylish and the round one is too common, and 32GB is enough.

Yeah... the left one looks like it would bend under the pressure of opening bottles. I don't know why, it just looks cheap. the right one looks much more durable.

The right one looks more stylish (lol), and you could put a nice Tek logo on it.

I like the right one. There would be no problem opening bottles with it. 32GB is more than enough. I would personally not buy it, since I have 16GB stick and lots of local storage. Plus shipping would be most likely really expensive for a USB stick.

Stop adding such cool things to the store I'm broke lol. This will be great just to be the nerd at the drinking parties, would love to have that rectangular one its very sleek.