The two keyboards are blackwidow chroma and corsair k70 NON RGB (red LED) due to some strange deal on chroma , chroma is cheaper than corsair non rgb here

Also about the longativity of the keyboards :)

Sorry for my bad English it's not my native language

EDIT: the corsair k70 rgb was on sale for 30 dollars less so i bought it and it's shipping :) i made my choice thank you everyone .
i dont know where to mark as solved though if any admin can mark this as solved xD?

It's all a matter of opinion when it comes to key-switches.

I like Blue Switches and Green Switches. BUT i'm currently using Blue Switches, cause they have a satisfying loud click. well for me they are satisfying. others may say it's too loud.

With Keyboards preferences, it depends on what you like. I can tell you from Personal experience that with the K70, you will get Dead LED Lights faster than damn near any other keyboard. i don't know why, but i have 6 Dead LED on my keyboard. and i got them in a matter of 4 months.

When it comes to Keyboards, most keyboard now-a-days are durable. they are made to last. LED's though, not so much. I would push for a Cooler-master keyboard since they seem to have more variety. as compared to Corsair. if not. just grab the K70. it's still an awesome keyboard.

Yeah, any answer will be very subjective. If you don't know how browns feel, I'd suggest to get a MX key sampler first, e.g. 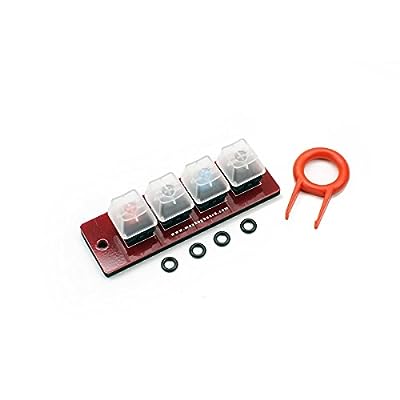 That way you might save some money in the long run. I cannot tell you about Razor, but I personally do not like the hard landing and sound of MX switches and prefer Topre instead.

Yeah, any answer will be very subjective.

Agreed. I use a Topre HHKB and it's awesome. Not sure how much you know already about the different types of key switches, but below is a link to a thread about mechanical keyboards

And those are the only two options available where i live :)

I think i do know all i jeed about all cherry switches theoretically
in normal conditions id pick corsair however since razer has rgb backlighting i dont know which to pick.. Thank you in advance

i have the black widow in my local best buy and i dont like the switches. they are to soft and dont have a very good feel at activation almost feel mushy and very close to rubber dome. for me there is nothing better than a good blue or a model M with springs. i fell in love with blues on first use and i can never go back to rubber dome switches. i would recommend a test kit but with it being way out of your price range i understand the problem of not knowing what to get.

i will say this unless you need a new keyboard right away put a post up on any of the websites in your area that are similar to Craigslist or even Craigslist if they have it in your country. asking to try any mechanical keyboards that they have and offer to meet in a public place and offer to buy them a cup of coffee for there time.

Sadly there is no such site here in Egypt
in going to buy either from amazon + shipping for the corsair k70 (worth it) or the blackwidow from kuwait a relative of mine can buy it from there fairly cheap
there is no such high end keyboards in Egypt to begin with :(

I know right :( look i'd manage with any switch type and i can adapt to any switch type as long as it is hogh quality ; D
i just want to know is the kailh blue that razer uses that bad compared to cherry mx browns that k70 non rgb uses
and is rgb lighting worth using kailh blue and buying razers black widow chroma??

I read tons of issues that razer keys doubletap on single tap and sometimes doesnt actuate and so on has some issues i want to know are those frequent and is rgb back lighting worth the risk
trust me.. ive been using a cheap membrane for a while now
any mechanical keyboard would be a giant leap for me ;) any switch type

I would get neither.

depending on your budget and location I will recommend different boards, but in general Cooler master is the best value since they're very sturdy but use shitty caps (the boards you listed also use shitty caps) if you want something nicer, FIlco/Ducky/KUL and maybe wasd would be good choices.

for switches I recommend blues or greens, but browns/clears are good too. Red i find just not satisfying to use, blacks are passable but I just would rather use greens at that point.

I have no other option than razer and corsair due to my location so i cannot get ducky or cm or any other brand :( however
since u said razer switchers are true knockoffs then I'll go with corsair :)
thank you all for your effort and time ;)

I can personally vouch for the k70 red LED. I have Cherry MX red keys as well. It took a few days to get used to typing on it, but unlike cherry blues when I am gaming It won't go all crazy if I don't press the key down all the way. It's just one smooth clack all the way down.

If you do not game, and only type, then the blue's and cherry browns might be better for you.

whera about do you live?

if its anywhere in europe you should easily be able to get Filco Ducky or KUL.

if its in asian leopold should be easy to get.

Just go for the black widow chroma if it's cheaper, but for me I really could care less about having a mechanical keyboard.

Dunno where you're at but if you just want a backlit keyboard look no further than the Utech Saturn. http://www.amazon.co.uk/UtechSmart-Saturn-Multimedia-Non-conflict-Manufacturers/dp/B00MULE6KW

not Europe or Asia.. i live in Egypt xD where civilization hasn't evolved much to make luxuries like mechanical keyboards available at all
i game most of the time and chat occasionally but i think reds will be great for me
i prefer browns though cause its safer.. some people say browns are like dirty reds.. But others hate reds saying they feel mushy
i like a soft switch in theory but i havent had a chance to use one
I'm leaning towards corsair cause i dont tend to use macros anyway and the risk of razer products breaking is high.. also i doubt I'll like the blue switch "razer's greens" anyway

Trust me.. those two keyboards are my only options xDD

I would be doing you a disservice by not telling you how terrible Corsair are in Europe as they will likely be your option to deal with. I had a K95 with white LEDs. it started to fail after 4 months and it too another entire month to get a refund on it, not a new keyboard a refund. One fifth of my entire time with that keyboard and Corsair just dicked around and never one offered a valid explanation. In the end i lost a third of my money on the keyboard. They did not even refund me completely. Even if you are happy with their products, if there is any chance you will ever have to deal with their customer service I would run a mile. Horrible people, their first product i owned and i shall never buy anything Corsair again because of how they treat customers.

On to actual keyboards. Ducky are great, I am using a Filco, Leopold are great, Cooler Master (CM Storm) are very good and have LEDs.

I am using Cherry MX Reds. I would advise blacks if you can find them. Reds sound like they will be great but after two keyboards of it they are just far too soft. I am going to customise mine to be super heavy.

Just my opinions, if you have any questions ask away. I really like mechanical keyboards.

The LED issue is only in k95 white LEDs and k70 blue LEDs its fixed now and red LEDs dont die :)
as a matter of fact i do know that corsair's support is horrible and i doubt i will be able to contact them anyway because i live in Egypt .. I'll be stuck with whatever i buy forever and also i hear that besides the LED issues the corsair build quality is awesome that is why i doubt i will need to contact their support anyway
Razer on the other hand have low quality and cheap materials as far as i know people always tend to say keys stick and chatter.. that is what makes me fear them

well its basicly very personal.
But the Razer Blackwiddow Chroma is not realy a mechanical keyboard, atleast it does not have cherry mx switches.

Razer use some of their own chinese creations