Which brand GPU should I get?

I'm getting either a R9 Fury X or a R9 390 X and my question is should I get A Gigabyte, XFX, or HIS card? I currently have A HIS 7970 Ghz edition and it's is awesome amazing product and looks the best in my opinion but being a lesser popular company their support sucks. SO I'm open to trying a new company and the only one that I like the way they look are Gigabite and XFX plus I'm getting a XFX PSU. I really like the R9 390 X from Sapphire but it has yellow on it and am pretty sure if I paint it there goes the warranty.

Honestly it depends on what you want to spend really..

I would kill for an R9 Fury. if you can get a Fury then definitely get one.

But if not then grab the 390x. As for which model to get. I would recommend the Sapphire or Gigabyte, or XFX model.

The gigabyte and XFX models both come with backplates. the sapphire model doesn't

I have another thread asking which card to get this one I'm only asking about brands.
I was on XFX's website they have 8 different R9 390 X's can some one tell me what the differences are I couldn't tell that there are even any and which one is the best one because I don't overclock I like my warranty to much.

they are all exactly the same. the difference between them is the CORE edition is just the stock core clocks. and the BLACK EDITION is the factory overclocked ones.

So why 8 different ones the explains for 2 of them plus the boxes have different colors on them and I just noticed some of them are all black and some are black and grey that explains 4 not 8.

Overall they are all exactly the same GPU. there's really no difference between them.

Ok I understand they are the same GPU I'm just trying to understand why there are 8 different ones there has to be some kind of reason for this they are not all Identical otherwise they would only have 1.

honestly I don't know why there are 9 models. but i personally don't think there is no difference between them. if you don't overclock like that then maybe consider a black edition. they are aggressively factory overclocked.\ you won't have to touch the clocks at all. plus i don't think you want to. i doubt you'd be able to push them farther than they already are. the R9-290 series were terrible overclockers. i don't expect the 300 series to be any better.

The Fury X is awesome at over clocking. But just like right now i spent $500 on my HIS 7970 when they were new and I got the turbo/GHz edition because it voids the warranty when you overclock.

Sapphire said this once and nobody listend: Their 390(x) has no backplate because they reinforced the cooler.
Go with the Fury, I got myself one and it hasn´t let me down yet.

MSI had made the R9-290x massive as hell with their Lightning edition and THAT still came with a backplate. And to add insult to injury, the Vapor-X models come with a backplate. Sapphire has no excuse not to include one on the Tri-X models or any of their models anymore considering damn near all the manufacturers are including one. everyone has gotten on the ball except for two. EVGA and Sapphire.

Are you really ranting on them not having a backplate?

Nope. I just don't think there is no excuse for Sapphire not including them. For example, all the R9-390s that are out right now are exactly the same price. $329. everyone else but Sapphire didn't include them. so what's the issue? why can't they include it?

Shit even HIS included one.. there's no excuse anymore for Sapphire not to include one.

To continue on, even the damn R9 Fury has one. but they can't include it for their other cards? 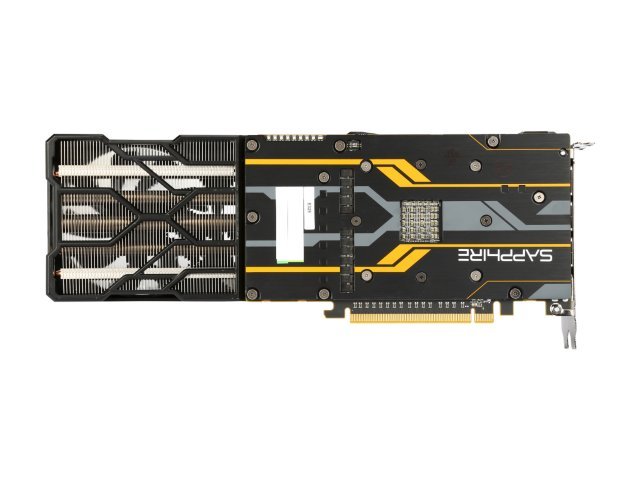 I love sapphire. I have an R9-290 Tri-X OC card from them, But i fart in their general direction.

I like the Saphire 390x too but no back plate and yellow are a deal breaker Thats why I'm try to decide between HIS, Gigabyte, and XFX.

I'd go for the Gigabyte. the G1 series are cherry picked by Gigabyte themselves. most of them are excellent overclockers (if you wish to do that)

I think that may be what I'm going with check out the link I think this is my selection from having like 10 different threads.
http://pcpartpicker.com/user/StaticNoize/saved/28q8TW

Can't do red its my most hated color and like warranties to much to paint or die it.