I haven’t used optical media in almost a decade, and I suddenly find myself needing to play a Blu-ray disc on my home TV.

Reddit suggested a $500 standalone unit from Panasonic (ub820). Does something like that present any real value besides lack up setup and a nice remote? Do features like hdr (TV is an omen x65 emperium, so it has lots of hdr) depend on the player?

Can I just plug a $23 external drive from Amazon into a PC and be off to the races with an Xbox controller? The last time I looked I think you need to remove drm and rip the media rather than just hitting play on a PC.

Thanks in advance for your input.

Looks like all the info I need is somewhere on the makemkv forums.

How does a used playstation 3/4/5 sound to you?

A brief look on Amazon is turning up results in the £60-£70 range for home blu ray players. 4K blu ray players still seem to be expensive, maybe that’s what you were seeing? 4K blu rays are a different standard. If you’re playing a 1080p blu ray it will not get any extra benefit from being played on a 4K player, but a 4K UHD disk will not play at all in a normal HD Blu Ray player.

Edit: I just looked and not only is the ub820 a 4K player, but it’s a 4K player from 2018 when the standard was substantially newer and more expensive than it is now.

Trying to play blu-rays on a PC is a total pain and probably not worth it in most cases.

Usually HDR is handled by the display but some players do have HDR tone mapping which is mostly used for projectors. Tone mapping quality is a big deal on lower light displays so better players can give better results. The same is true for image processing, which is usually the reason one player can cost $50 and another $500. Taking video data and displaying it is not a 1:1 process and a better player can give a better image although outside of HDR tone mapping the differences are pretty subtle.

I have no experience, but I’ve seen a LTT video comparing playing Blu-rays on a dedicated player and a console.
During A-B testing they could see differences, but the consensus of the test subjects was, that the differences are very subtle and in most cases not worth the up-charge for the dedicated player. 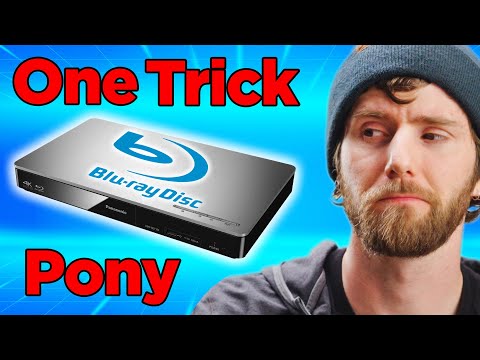 Yeah, the conclusion was mostly that dedicated players came with dedicated support for a variety of codecs, while consoles usually only have the most popular ones. There were slight variations in tone mapping and dynamic range, but nothing inherently inaccurate when watched standalone.

BluRay on PC is just not worth it, i had it on my system for a while, i had to use PowerDVD and i really disliked it.
For my standard BluRays, i just use my PS3 now, i’m yet to try some modified players that can be installed on it, since the standard player already works pretty well, i also haven’t had the chance to try 4k BDs yet, but some people really like to play those on Xboxes.

The last console I owned was a PS2 haha.

That’s what I’ve been getting stuck on is 4k. The TV can do it, but I’ve been watching shitty 720p pirated garbage for my entire life so it seems unnecessary. And yet. . .

This is the kind of stuff that kills me, these standards seem so nebulous from my un-initiated perspective.

That’s what I’ve been getting stuck on is 4k

4K on it’s own is pretty meh, if you have a large display like a projector or large TV with a wide FoV then maybe the difference over 1080 will be noticeable but in general it’s not worth it. HDR is the big advantage to UHD and when it’s done well, on a display which has enough contrast to pull it off then it can be really impressive.

Uhd is decent. Hdr is primary case for it. As many uhd movies are actually 2k. Like marvel ones are 2k up scaled to 4K.

With that said. Uhd Blu-ray’s are rippable using makemkv. Though I’m not going to get into specifics. Google is your friend.

Non uhd Blu-ray’s rip without issue with makemkv. Or you can stream to vlc.

I ended up ordering a Blu-ray drive to make a digital backup of my discs, my tv has an Nvidia shield built in so hosting a Plex server on my PC looks like it should be a simple solution. Kinda wish I could avoid making an account to host media locally, maybe I’ll find something else later on.

I chose this method partly because the $70 I paid for same day delivery of this drive was the cheapest option to get the moving pictures from that disc into my tv. Also, the thought of falling into the rabbit hole of comparing all the feature combinations I think I need / cost of different devices makes me sad and I don’t want to do it.

Are you making uhd backups or non uhd? If non any drive will work. If uhd you need a uhd friendly drive.

This first one is non-uhd, but I made sure to pick a uhd-friendly drive that I can update the firmware on later.

The only blu-ray player that matters is the one you can rip your movies with.

wanna share you drive (s) for the class?
and [edit: the rest of the message might have been seen to encourage rule breaking behavior]

It requires flashing modifed firmware to the drives that back dates it to previously usable firmware. As the companies making these drives have updated the out of the box firmware to not permit uhd reading.

This is a near complete guide on hosting your own server for media consumption.

That’s a great write-up. I use Kodi for my Blu-ray collection as Plex is a bit overkill for my use. A couple of suggestions I’d make: If you have a spare computer to encode on, or a fast CPU and don’t mind tying up your computer for hours on end - encode using the 265 Codec. It produces much smaller file sizes at the same visual quality. Useful i…

Here is one that has nothing to do with proprietary software (plex). Instead it is based on jellyfin.