What the hell is wrong with putty?

is this why people hate it? i can’t enlarge the microscopic console 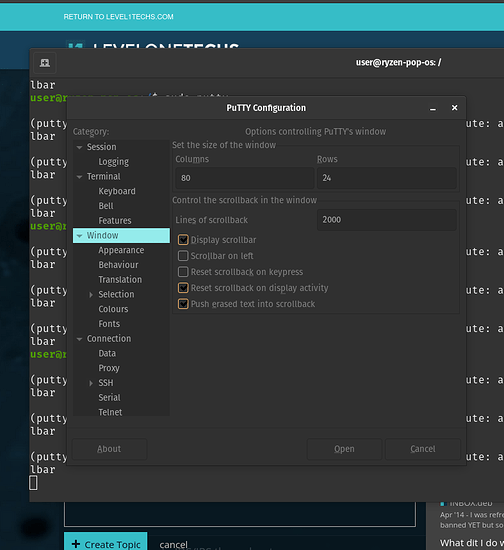 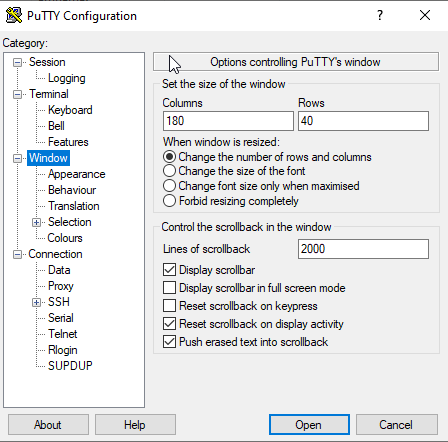 I can resize it and change the font size to get a window any size I want. I’ve never seen it look like what you’ve got.

are you using windows? when i resize it the fonts still stay tiny.

I use KITTY, a fork of PUTTY on Windows.

I will have to test the static font size and see what happens.

Why would you use putty if you’re not on windows?

So KITTY works fine under Windows 10

are you using windows? when i resize it the fonts still stay tiny.

It’s only on Windows that Putty has the option to “Change the size of the font” when resizing the window. You have to check the option and save it as Default Settings or save another session with those settings changes.

Keeping the font size as configured and increasing the number of rows/columns is what is expected, what almost all terminal emulators do, and extremely useful for most people.

You can right-click on a Putty terminal session, choose Settings and change the font size/settings.

but… but… but I use putty to talk to the serial console on my pfsense?

Am I doing it wrong again? What is the preferred way to talk to a serial console port?

Am I doing it wrong again? What is the preferred way to talk to a serial console port?

For linux there are some good alternatives documented on the Arch wiki.

Putty settings are so confusing, I end up searching every tab each time I need an option. Somehow I find it easier to navigate the bash man page.

I think I’ve used putty on Linux once then removed it. For every day stuff I just use a terminal and configure ~/.ssh/config for my connections. For console on devices I use minicom but you’re obviously not limited to minicom you could use Screen for instance.

Tabby might be a good alternative if you can’t wrangle Putty into doing what you want. 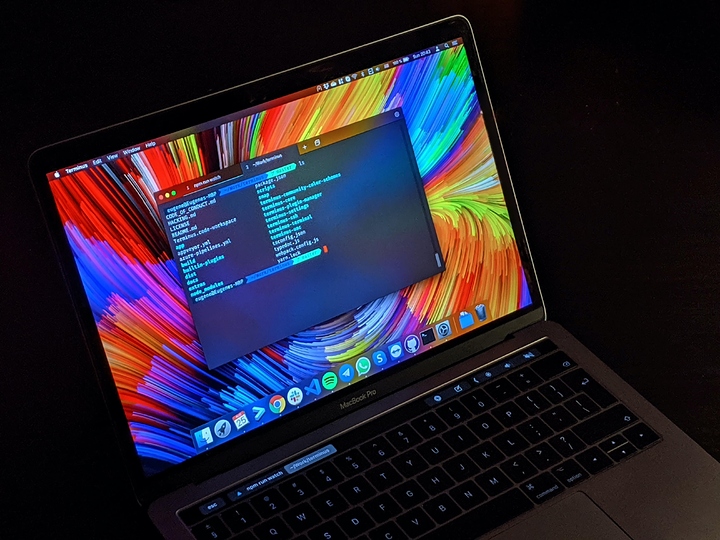 GitHub - Eugeny/tabby: A terminal for a more modern age

A terminal for a more modern age. Contribute to Eugeny/tabby development by creating an account on GitHub.

Is it terrible that I’ve been using nothing but screen as my serial terminal for over 10 years now?

Isn’t screen kinda the precursor to tmux? Don’t think I’ve ever used it, but I’ve heard it mentioned for doing updates and stuff remotely which might interrupt an SSH connection.

I still use cu. minicom is trash, painful to try and set the options you want, does things by default that needs to be turned-off, etc. cu is so much simpler and easier, and just works:

Getting harder to find it, the uucp package is getting removed from some distros. There may be a specific CU package, or you may need to compile your own package from source, but it’s trivial and still works fine. No idea why they’re gun-ho to remove what works, is simple, needs almost no maintenance, etc. The recommended alternatives change every few years… microcom may be better than minicom, but why not cu?

Honestly, you hardly need a serial terminal program at all. stty does the magic of changing setting. Then it’s just a matter sending input to the device, and showing the output.

Yes, screen like tmux allows for multiplexing. That is, you can de-tach your session and it will stay running. You can come back later even from a different login session and re-attach to the running screen session to resume whatever you were doing. If your doing something that takes a lot of time to complete over an ssh session, its usually recommended that you run whatever your long-term action is in a screen or tmux session in case your ssh session gets interrupted.

Why would you use putty if you’re not on windows?

i took one look at minicom and noped the fuck out. minicom lost me after the 3rd argument required to even launch it. reminds me of VI and VIM. i can click like 3 things on putty and i’m off to the races. i also know it from my time on windows. also makes it nice to use the same app on more than platform.

nice to know putty is the only gui serial for linux and it’s pseudo trash due to the font size. …damn…

maybe i need to break down and put vmware on here to run xp or win 9 and passthrough usb serial to it. a bit extreme if you ask me.

One more for picocom. The defaults are sensible, it works.

Tabby is… a mixed bag. Now it seems to work fine, but I’ve had days where it lagged severely, haven’t figured it out yet.

For a Windows, depending on what you need, I’d say either Tera Term (for regular text stuff like a console) or YAT (for stuff like modems, or more specific serial-based protocols, YAT handles binary protocols nicely as well).

why people hate it?

It uses its own SSH key format, putty format (or could be something else, it looks similar to TLS certs from what I remember), instead of the OpenSSH format, which is the one that works on most if not all servers out there.

Also, putty does some weird stuff on certain shells, like not sending the Home and End buttons, or Page Up/Down, stuff like that. At least in Windows. I started using PowerShell with Microsoft’s version of OpenSSH server and client and never looked back. That is, if I am forced to use Windows. And with that, I don’t even need to use WinSCP anymore, I can just scp. But if I have the chance to not use Windows, I take it.

I’ve never seen it look like what you’ve got.

He’s on Linux, OP edited the OP and mentioned he’s on Pop!_OS.

I use putty to talk to the serial console

Now that I think about it, I never figured how to use anything else on Windows to use a serial console. Thankfully I don’t have to. Last time I did, GNU Screen worked well.

Is it terrible that I’ve been using nothing but screen as my serial terminal for over 10 years now?

Nice. I mean, each to their own, but screen is nice, especially if you got used to it. Bonus points for it either being bundled with some distros, or being available in the main repos. I use abduco (session manager) and dvtm (terminal multiplexer), they’re written by the same individual, but they follow the Unix philosophy, so you can use them with anything. Nothing stops you from using screen with dvtm for example (I did on Ubuntu long ago, because abduco was not available in Ubuntu’s repo, but dvtm was, for some weird reason).

Technically yes, but the two don’t have much in common, other than the fact that they do multiplexing and session management. GNU Screen came out in 1987, tmux in 2007. I don’t remember the details or if I’m making stuff up, or if I’m remembering something that someone made up, but I believe tmux was written because GNU screen was considered bloat, so bad for security, was GPL’ed and it wasn’t easy to use.
http://undeadly.org/cgi?action=article&sid=20090707041154

Then, abduco and dvtm were created because both screen and tmux became bloated and have too many options. Also, because they don’t do one thing, they do both multiplexing and session management.

dvtm brings the concept of tiling window management, popularized by X11-window managers like dwm to the console. As a console window manager it tries to make it easy to work with multiple console based programs. News dvtm-0.15 released (2016-01-09)...

Ah, I love ya Biky…lol