What game are you currently playing thread?

With my internet being down at home.
I was rather excited when I found that
Grim Dawn supports LAN
Without requiring a online check in.
So me and the wife have been playing it
"The gog version"

Oh crap -_- That's what I get for having multiple tabs of the forum open....

I'm playing Feed the Beast right now with some guys on the forum. The server was set up yesterday. Anyone wanna join up? Check out this thread.

Anyone into Feed the Beast using Direwolf20's pack? Started playing along with Direwolf for his 8th season and would love to find a good server to join.

why the hell not

I run a modded minecraft server with the All the Mods moddpack. About 120 hours on the server so far. I get embarrassed when I play it in the open at my college.

A buddy and I started a multiplayer game through tunngle (semi co-op, we're not in the same team but we don't attack each other... yet), and two months later, we still haven't finished it, neither of us have the time because of studying. :(((

HD edition is a travesty. I still can't believe they dare put a price tag on that thing.

Yeah I looked into tunngle a long while back, but it just wasn't an option for me. I usually play with my brother and dad who or both not very technical, so any non-standard config is not great.

I love everything about the hd edition (simple online multilayer via steam, widescreen support, etc) BUT I sure wish they added all the expansion content from the complete edition

I get embarrassed when I play it in the open at my college.

lol come on bro. Theres schmos who play Hunnie Pop in the open in some of these places!

I'm playing Bejeweled 3. I bought it on Humble Bundle years ago without the intentions of ever playing it, but now it's one of my favorite games.

Got that for free at some point in time. It is a nice game.

first one on the list to play is Re-Volt

After I get some crap straighten out since I'm done with school for this semester, I'm going to play me some Duke Nukem 3D and Earthbound.

The Forest
Smite
Heroes Of The Storm
Overwatch

I'm jumping between the games above, and am debating if i should resub to WoW.

World of Warships. Anyone else playing on the EU server?

Finished Portal 1 and 2,now playing Borderlands and Saints Row The Third.(Also Prospekt and Black Mesa when im in the mood for some HL2 action). 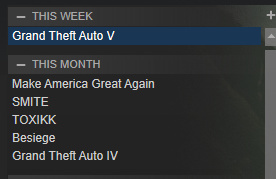 I just started playing Project Highrise and man does this game test your integrity. When I had about 40 tenants the economy tanked which caused some of the tenants to leave(the rent was too damn high, apparently) and it got bad enough to where I had to evict the maintenance crew just so I could be in the black(most of the rooms looked grungy). After paying off my loans the economy got better shortly after and now I am expanding while making record profits.