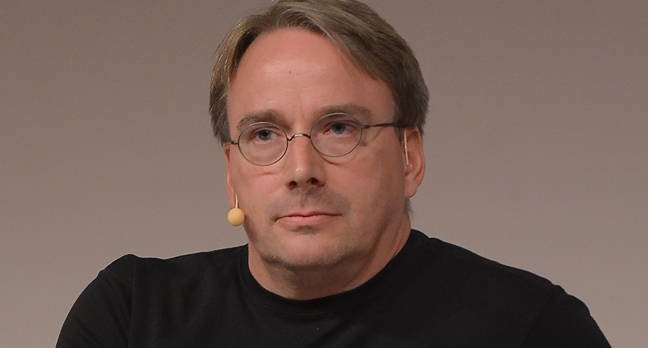 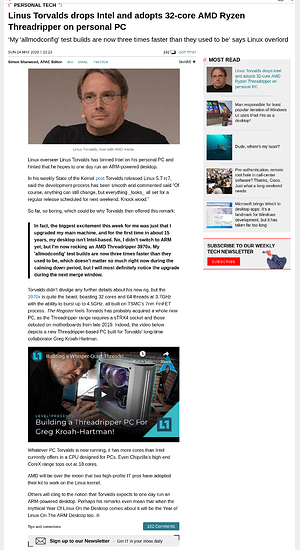 Yeah, I heard that today as well. It just makes sense.
Pretty cool for L1T to get the shoutout in an article like that. Congrats @wendell!

Maybe its just a targeted ad. I know the L1T is an invasive advertising platform borrowing its way into the psyche. 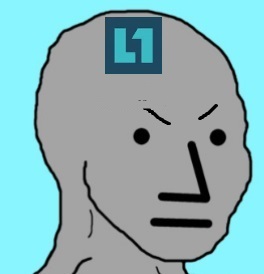 Huh, trust El Reg to link the L1T vid on GKH’s vid, but not bother scrolling down the channel to see Linus’ build…

There will be a Wendell interview with crow Hartman soon

Linus build was zen+ and never could get him fully interested. Zen2 otoh

This was cool to see and read. Good Job.

Meh, I want latencies to improve before going Threadripper. No other real choice except for Cascade Lake-X if you want something that isn’t Threadripper 2000 for single core frequency without as bad of a latency penalty and with a ton of PCI-E lanes below the current prices of the 3960X.

Yeah intel’s kinda shit and its really funny because I’ve kinda been on one about intel and their BS since skylake. And the really sad thing is one of my friend’s is a streamer and for 1200 bucks less than his machine I still have a more powerful computer.

Its fucking stupid how versatile the platform is. Intel spent most of their chromosomes on perfecting 4 and 6 core processors to the extent that all they can really say they have now is better instructions for streaming and stuff, but how long will that last? They mostly have become a software company as far as I’m concerned and mostly work on perfecting instructions anymore, even though you’re paying non-competitive prices and still getting cucked out of cache.

What really pisses me off is if you go back and look at FX, yeah it didn’t have single core power, but its multicore was through the damn roof. They had that down pat. And at the same time they got their CCX design down pat, and freq scaling tech, all they had to do was refine the design and no duh we were going to see the market flip because of it.

People need to get the reality of it. Intel’s out of date. Linus is just the example of it.

Gamers Nexus even covered this move. Still, I can see the compile advantage, but I still need low latency.

You know, I haven’t seen benchmarks for memory latency for the PowerMac G5 actually…

My understanding is LT is something of a hypersensitve and in the past has stated his computer needs to be absolutely silent with no fans. Anybody know how he may be cooling a beast like this passively?

Anybody know how he may be cooling a beast like this passively?

Watercooling with pump and radiator outside the room.

Or exotic setups with Mineraloil or a thermosiphon could also work.

Watercooling with pump and radiator outside the room.

The latency is fairly decent. You should consider the next generation of threadripper. However only buy what you need. Ryzen is very sufficient lol.

Lol and no offense or discrediting meant here but ma dude you are on X99. Zen 2 has better latency. Im curious to know what workload of yours is that latency sensitive?

Even if you do have workloads that are. They would most certainly benefit from upgrading to current gen

X79. I hate it because both Detroit: Become Human and Unreal Engine 4 isn’t enough for a 4960X.

I don’t like current Threadripper pricing and no Zen 2 options at 12 and 16 cores with lots of PCI-E lanes.

Yeah, that’s my big qualms right now as well. I honestly think I’m done with the high end. I might embrace the tech-boomer mindset and go Ryzen 5 next time around. Down from my 1950x.

Latency for latency sensitive games like Unreal Engine titles, which lose FPS if the memory subsystem has too high latency. Also for Looking Glass.

The main reason I have for not being satisfied with my system is Unreal Engine not playing nice.