Wanting To Use My USB Headset With PS2 Slim For Audio- Will This Work...?

I recently got my PS2 slim repaired & I am more than ready to enjoy a couple of titles on it for old times sake!

But there’s something you all should about my console setup: Due to my room not being super big/roomy, I don’t really have the space for a tube tv much less a flatscreen OLED or what have you as much I would LOVE to have a flatscreen TV.

So, what’s my solution until me & my family can move to a bigger house in the future? Basically, I have to use my gaming monitor from my pc setup as a display for any of the consoles I wish to use- the Switch, Wii/Wii U, & lastly, the PS2 slim that I have. Now, just a few days ago, I tried using my monitor with my PS2 & I was able to get the display outputted to my monitor via a RCA to HDMI Adapter – Link for product here: https://www.amazon.com/gp/product/B01L8GG6PW/ref=ppx_yo_dt_b_asin_title_o05_s00?ie=UTF8&psc=1 – but, I couldn’t get my USB headset to work via this setup mainly for the audio. For anyone wondering, this is my USB headset that is my daily driver: https://www.amazon.com/HyperX-Revolver-Gaming-Headset-Surround/dp/B01N9RM9N3 I tried BOTH the USB ports on the PS2 & the USB passthrough ports on my monitor while using my headset & for some weird reason, whatever it is, it didn’t work. Now, I do know that on my monitor’s OSD, it DOES have an option to switch the audio from Digital to Analog, but does that explain why that didn’t work?

BTW, the monitor that is part of my pc setup is the MSI Optix MPG27CQ. And in case anyone was wondering my I wish to get audio out of the PS2 via my headset --IF it will work.-- it’s mainly because I don’t have a speaker for my setup just yet. I AM working up to getting the LG UltraGear GP9 which would be a GREAT fit for my setup overall, but it will be at least a few months until I’m able to buy it at the rate that I’m going.

So with that being said, I’d to hear your opinions/advice/suggestions on this IF I can get it work. And if so, what can I do?

As always, if you need more of the “nitty gritty” aka details, just be sure to ask & I’ll reply back!

Thanks & hope someone knowledgeable can help me out here!

And in case anyone was wondering my I wish to get audio out of the PS2 via my headset --IF it will work.-- it’s mainly because I don’t have a speaker for my setup just yet.

The PS2 has an analogue output, right?
If so, you could connect to the blue port of your motherboard.

A program like Voicemeeter can then be used to route and mix audio from your PC and your PS2 to the USB headset ( when connected to your computer).

It actually has Digital Out (Optical) since I have the PS2 slim edition. Also, from what I noticed, my motherboard doesn’t have any blue ports, but it IS 1 of the more recent models. The motherboard I have is the MSI Z490 Gaming Edge WiFi. Still, do I have any sensible options given how my setup is at the moment?

I was thinking around this but it seems not possible.

The ps2 doesn’t really have an OS to handle these things, just a Bios to boots the disc effectively. So there is no standard USB audio driver.

But there was SOCOM, that used a USB headset.

Unfortunately it looks like the PS2 had each piece of software load the drivers they needed, and most didn’t need USB audio and even in socoms case I don’t think it was full system audio but just your teams voice lines the rest was still TV output.

I was hoping FreeMcBoot might have a work around but it looks like it would have to be a thing built into whatever game/app you are running.

Hm. Well, for the game itself, it’s simply a disc & since my monitor doesn’t have like built-in speakers, that’s why I was thinking of any way I could could get audio from the PS2 since I want to use it with my monitor.

Optical out will do that for you. Just need something for then optical to play out of.

Huh. Well, TBH, I never even bothered with Optical even if I have heard of it. Anything I should know?

Still, do I have any sensible options given how my setup is at the moment?

The optical out could be useful. Running it into an Audio Interface of sorts ESI U24 XL or ART USB Phono Plus would allow you to capture that, or pass it on to your headphones.

I am not sure whether these two can act as a format converter, wich would then allow you to bypass the computer in a later setup.

Anything I should know?

Compared to all other audio transmission systems, TOSLINK is pretty painless. Just plug in and go, really.

Its not super common any more, other than that it is just a digital audio out.

Not that its relevant right now but super useful for MiniDisc recorders, you can put a CD in the PS2 and connect the MiniDisc over Optical cable and copy it over from CD to MiniDisc.

Sounds like it’s a bit out of my league. LOL Still, do I have any OTHER options for audio if I wanted to use my monitor as a display? (For now…)

I do have at home a PS2 AV cable that goes to SCART and in the middle has red white and yellow RCA break outs for some reason I can’t remember.

That should work but j never used it for that and I can’t remember which way the connection on them is working.

Video wise, just hook the PS2 up however you want.

Audio wise, what ports does the PS2 have and does your headset have to run via USB? (= what make and model is it?)

I stated it earlier, but I’ll run it by you again in case you overlooked it or forgot. For the video, I managed to use a converter/adapter I got off of Amazon & it works great! As for my headset, it’s the Hyper X Cloud Revolver S. [Both links are in the description if you take the time to look.] As for the PS2 Slim, it has what it calls “Digital Out” aka optical.

Well you already have the Red and White RCA cables going into the upscaler, perfect. Just leave the yellow one connected and use the red and white to connect to an amp, or speakers or something, this is outside my realm of knowledge I don’t know if those RCA cables are line level or need amplification.

The USB headset will not work with the PS2 in any direct way.

And the HyperX appears to be just a regular set of headphones you plug into its own USB amp converter. So you can take the red and white and connect them somehow to the Clouds 3.5mm cable. Again I don’t know anything about RCA outs so look into if it will direct connect, good luck finding female RCA to female 3.5mm but I digress, look that up and see if you need an amp in between.

I had indeed overlooked the links, whoops

IIRC That comes with a Y-splitter cable to hook it up via two 3.5mm , right?

This is easy then!
What you need: 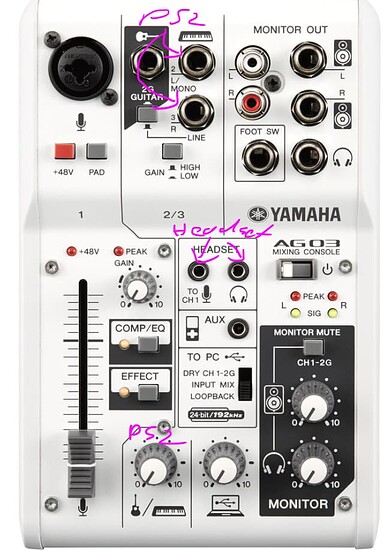 If audio is being passed over HDMI you should be able to just plug your headphones into the 3.5mm jack on your monitor. This is going to sound silly, but have you tried not using your headphones USB adapter and just jacking the 3.5mm in directly?

I basically have to use all of the RCA cables for the converter/adapter, but I also stated in my post that I don’t really HAVE like a speaker setup to use for this sort of thing, but I am working up to a speaker that would serve that purpose. Please, next time, try to read a post thoroughly all the way through & understand what the person is saying/asking before shooting random questions & all that okay? I know as a random user you’re trying to help, but it really irks me when people just don’t pay attention. -_- Sorry if I’m ranting here…

Good call I for get monitor have audio out like that. That indeed should work just fine.

The yellow cable is video, that stays in the adapter.
The red and white are Right and Left analogue audio. You can just plug them in wherever you want to, or leave them dangle loose.

I actually could use the 3.5mm cable if I were to disconnect the USB portion of my headset. The problem is that cable is a bit on the short side when you disconnect it.