Currently I have an Oculus Quest 2 which restricts my VR gaming to Windows only. Aside from that, I’ve mostly left Windows behind. So to complete my transition, I’d like to find a headset that’ll work seamlessly* in Linux. The Valve Index seems like the obvious choice, but the MSRP is eye-watering. Are there cheaper headsets that will work well in Linux?

Having many new game not working on Windows 8.1 with the index, I would doute that linux and vr are compatible…

Could be wrong but I dedicated a Windows computer to it

My Rift is the only reason I keep a Windows install on my main home machine. I’ve been hoping for an open implementation of the Oculus drivers and stack (Similar to the Nouveau drivers for Nvidia cards) but no one seems to be working on one.

I know there’s OpenXR but that’s not the solution. It provides hardware abstraction on various platforms but it’s not a driver.

Some Googling about turned up this article:

The State of Virtual Reality on Linux in 2021 - Boiling Steam

Here's the current state of Virtual Reality on Linux, from hardware support, to games that work, and tools you need to get started.

Further research also indicates that the HTC Vive and Vive Pro (not Cosmos) might also work for some SteamVR games.

I’m in the same boat.

There’s a very alpha project to get the quest2 working in linux (GitHub) but I tried and failed without trying too hard to get it to work with popOS when I was running it.

I can not for the life of me remember the name of the project.

@thro I think I found the same project as you, alvr. It’s an open source project aimed primarily at Windows, but with an available (experimental) Linux client. 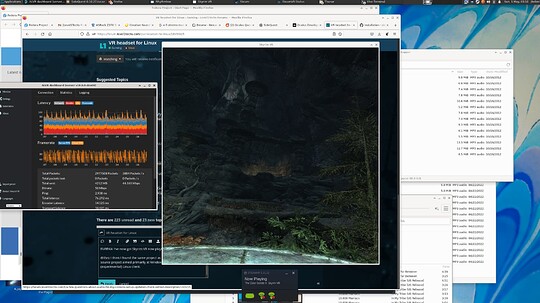 Performance is pretty poor, but Skyrim VR is a hog anyway. And getting closer to my WiFi router will probably help (it’s in a different room.) Unfortunately I don’t think this method will work over the wire.

It’s in better state then most people realize compared to a year ago. Still we won’t see massive improvements until Deckard comes around.

This person here did manage to get ALVR 0.0.17 to work on SOS with the SteamDeck few days back.
She admitted however that she’s not that much into Linux and needed help by the developers. 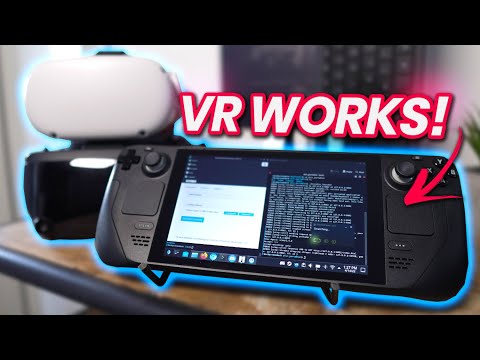 I tried to get v0.0.16 to work with my Quest 1 on a pop!_OS installation I did slightly before the current version got released and end up stuck in the white virtual space that loads with the SteamVR compositor before people would see their SteamVR Home and the ALVR Discord wasn’t really helpful as Linux orientated channels are for devs only.

So I gave up on that and since I have been recommended here previously not to try gpu-passthrough on my 5600G with the RX580 for Windows10 while the APU part would be for openSuSE, I ditched the whole Gaming on Linux thing a year or so ago again.
This is most certainly going to change by tomorrow as that’s when my SteamDeck arrives but I certainly won’t use it for VR.

Which distribution are you and how much pain was it to make it work?

Might be tempted to try get it working on my mostly idle Ubuntu box (which I can re-format with something else) - with 3300x + Vega 64. If it works well enough might roll over to Linux on my main box, at least dual boot.

@thro Fedora 35. Fairly painful, but mostly because I didn’t know what i was doing.

Unfortunately those steps don’t cover all the problems. Firstly you’ll need to install SteamVR on the PC, then launch it once to configure itself. Then install alvr itself on your PC. Then you have to install the alvr android APK on your headset, the version of which must match exactly the version on your PC. My headset already had developer mode enabled, which is done (oddly) from the Oculus phone app. Once that is done, you have to “trust” the headset from the alvr_launcher on the Linux PC.

Then install a VR app and see how it goes. SkyrimVR worked pretty well all things considered, but the display would often get very blurry (I presume this is dynamic resolution trying to cope with bandwidth/reception problems.) I also needed to change the default Proton version; don’t be afraid to try different versions to find one that works. I also tried Hellblade, but only got as far as the starting menus - it was a glitchy mess.

I also installed Half-Life: Alyx but didn’t have time to try it out. I suspect Fallout VR will work well because it’s based on the same engine as Skyrim VR, but you never know…

Can you say why you were discouraged from doing this? This is pretty much my future plan (once I have the time to tinker until it works) to get away from dual-booting Windows just for VR. I plan to use my iGPU for the desktop and pass through my 1060 and some USB ports to a Windows VM, for the Rift.

Now that GeForce drivers have official support for running in a VM I can’t see the down side. What am I missing?

I would definitely be sussing this all out if I had VR still. Last one I had was Quest-2 and I sold that, I had a pre-order on DecaGear1 but it tanked hard and so now basically waiting for next-gen VR to appear. (Stuff like Deckard etc…)

Available IOMMU groups were the reason basically as well as CPU lanes if I recall correctly.

By the time I ditched Linux on the desktop machine I was pretty much annoyed by maintaining qemu too, an upgrade to openSuSE made my previously fine working VM with passthrough for both my 5700 and Windows NVMe no longer working and I couldn’t get it to work anymore.

Not saying I wouldn’t enjoying having that function, especially since I still have games that require Windows no matter what but it’s just too complex for my eventual needs.

I think I’ll still try setting up passthrough just for the experience but I’ll keep this in mind when deciding whether to nuke my actual Windows installation. Maybe I’ll keep it around a bit longer than I planned to. Just in case.

I ditched the whole Gaming on Linux thing a year or so ago again.

Transitioning from Windows for life to Linux is a LONG process. Took me at least 2 years to finally settle on Linux as a full time thing, and even then I have Win10 on backup for testing and comparison purposes.

FOSS is getting better (Linux) but only in baby steps, still lots of things left to be done.

Transitioning from Windows for life to Linux is a LONG process. Took me at least 2 years to finally settle on Linux as a full time thing, and even then I have Win10 on backup for testing and comparison purposes.

FOSS is getting better (Linux) but only in baby steps, still lots of things left to be done.

I second this. I’ve been trying to switch completely for years. Every year, M$ and Apple turn the screws a little tighter, and my desire to switch keeps growing. And at the same time the Linux experience keeps getting better and better, albeit slowly. At last I’m to a point where I’m knowledgeable enough and the desktop is good enough to use as a daily driver.

Even now I keep Windows handy if I want to play a game that Linux doesn’t support, or if said game doesn’t have mod support under Linux (looking at you, BG3.) The other holdout for me is Word…need that sometimes for resumes, etc. Yes, Linux word processors can open a Word file, but that doesn’t mean they can render them as accurately. And when you’re applying for a job, you don’t want your resume to look like alphabet soup.

or if said game doesn’t have mod support under Linux (looking at you, BG3.)

Often you can run the proton versions (wine) of said games and use stuff like Vortex or Mod Organizer 2 (preffered).

BUT there are extra steps in getting that setup just right under Linux because proton runs games in prefix containers which windows uses typically don’t understand how that might present some challenges.

Tip: Symlinking prefixes is your friend. And STEAM_COMPAT_MOUNTS variable…

Got a bad taste in my mouth from Vortex. Yes, Mod Organizer kinda sorta works, but it’s not great. For Bethesda games, I actually tend to use Wrye Bash. It’s got a quirky, unintuitive UI but once you get used to it, it is very powerful. And it seems like no matter what OS, distro, or Linux version I use it (mostly) works.

I just use both, MO2 is good for overview and organization of files while wyre bash has some great conflict solving abilities.

In saying that there are many tools, and most can be launched via MO2.

Yea, I have been fine with using Linux exclusively during the Vista SP1 days up to when Windows 10 came out because that also was when VR became a thing.
Only exception are like four or five games really for which I went as far as keeping a small partition with Windows around that did the job.

That said, I’m fine with playing on Linux and daily drive it on the desktop for really the most part.

But again, VR is a selling point for me despite only really playing a handful of games which however can even match games in total playtime I enjoy ever since I have been a kid.

That said, sure I will try getting ALVR to work again at some point and that whole gpu-passthrough thing was really cool when I made it work but overall, it is more time consuming than useful in my situation.