A week ago I built my new PC and decided to go with a vertical mount, knowing that my case (O11 Dynamic XL) would be up to the task from a thermal perspective, at least according to Steve from GamersNexus.

Today, I switched my PCIe riser cable, because I’ve ordered one that was too long and have replaced it with a shorter one.

However, I just noticed that I didn’t mount it as close to that mainboard as I could have and as a result I’m wondering what would be the best for GPU thermals.

Currently, there’s about 2in (5.08cm) distance between GPU fans and the glas side panel, but I could probably increase that to maybe 3in (7.62mm). Of course, this would push the GPU closer to the mainboard.

What’s your take on this? Is it generally like more distance more better? Would it be worth the adjust the GPU’s position? I think there’s a video by GamersNexus where Steve mentions there should be x inches distance between panel and fans, but I am unable to find that video. (Maybe he judt mentioned that in a review of something else.)

Anyway, any input would be appreciated, thanks

I don’t think there is a “safe minimum” distance between GPU and side panel.
It all depends on how the air flows through the case.

In my portable machine there are 5cm between acrylic and GPU intake, but as airflow is left to right, GPU temps are very in check (60°C under load).

The pedantic answer is that it’s not efficient because the cold air coming from the bottom (if you have any fans drawing air in from the bottom) needs to be sucked in by the GPU fans so it loses pressure. Also the efficiency of this mount depends on the orientation of the fin stack inside the cooler. But most likely is horizontal so the vetical orientation makes sense regarding that.

The normal human being answer is that if you’re not throttling or push more than 50°C while browsing the web you’re good.

True. But we can theorize for hours over this if for pleasure.

Compare results, use better one

Thanks for all the answers thus far, to give you a better understanding I will post a couple of pictures of my build:

Case w/o side panel and turned off: 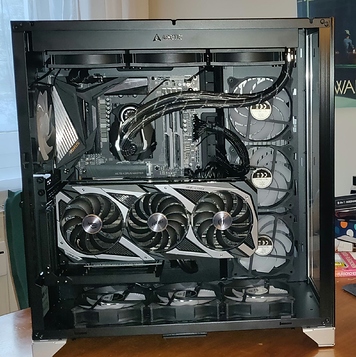 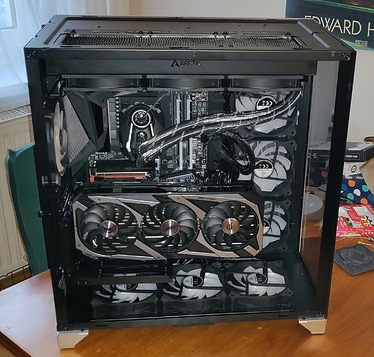 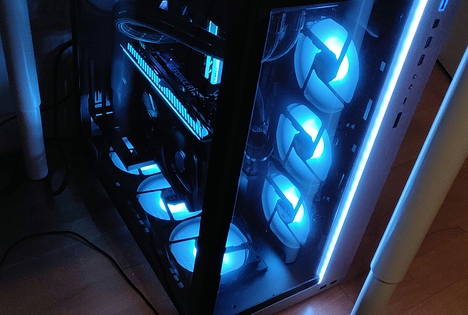 As you can see, the bottom intake fans blow directly into and through the GPU’s fins (the are oriented in the usual way. From the picture’s perspective it would be vertical but afaik this orientation is coined horizontal.)

In my portable machine… 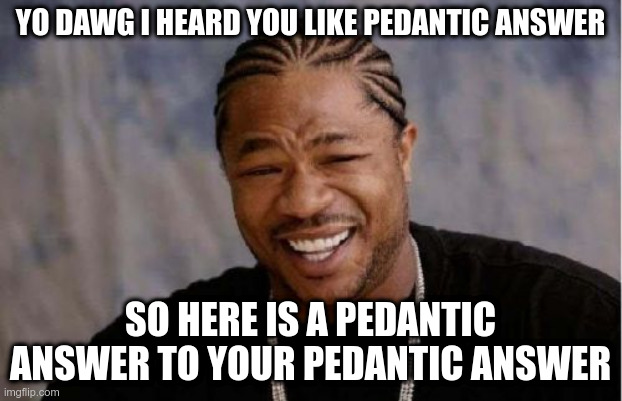 The problem is that temperatures are only half the story, because modern GPUs don’t exceed temperature but reduce clock speed more, or don’t clock as high (game clock, boost clock, uranium clock, …) Furthermore, even if temperatures are the same I cannot be certain that the fans don’t spin faster. The only way to do that would be to statically set the fans and perform tests.

The normal human being answer is that if you’re not throttling or push more than 50°C while browsing the web you’re good.

I got that covered I think:

True. But we can theorize for hours over this if for pleasure.

I would have loved if GN Steve had already theorised about that and performed tests. He has quality content

Compare results, use better one

Yeah, but I would have liked to avoid re-assembling my PC

Today, I wanted to move the GPU a bit closer, but that’s not possible anymore because the PCIe riser cable is in the way. At first, I used a longer one (50cm) which was actually too long so I ordered a shorter one (20cm). But this 20cm cable is still a bit too long, but now I’m also unable to move it out of the way. I think I will purchase a 15cm cable once it is in stock again.

Also, here is a final picture of me measuring the distance between GPU and side panel: 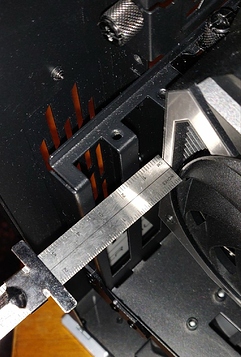 Also, the riser cable touching tze backplate shouldn’t be a problem, should it?

That’s absolutely correct and an oversight on my part. But I’d say that if you’re not seeing massive performance hit you’re probably not throttling.

Also seeing your build I’d say that is ready for takeoff so you’re absolutely good and I wouldn’t worry about temps at all.

Also, the riser cable touching tze backplate shouldn’t be a problem, should it?

Is it touching just a bit or it’s full on resting on the backplate? If it’s the latter I’d say you should try to get it away from it because GPUs tend to kick out a lot of heat and the backplate, if it’s functional (which I think it is seeing you have an MSI 3080), sinks enough heat to get it into the 50°C or 60°C during gaming or heavy workloads. Not because it’s going to melt anything but because heat influences signal integrity.

Also seeing your build I’d say that is ready for takeoff so you’re absolutely good and I wouldn’t worry about temps at all.

Is it touching just a bit or it’s full on resting on the backplate?

Yeah, It is functional.

Thanks for your input again, it is appreciated.