Using a TDA2030 Audio Amplifier Module as a Microphone Amplifier? Am I an idiot?

Alright I know I’m an idiot, but please point out my faults as to why I can’t seem to figure out how to use a TDA 2030 module as a microphone amplifier.

Here’s how I used the circuit:

Here’s the intended use: 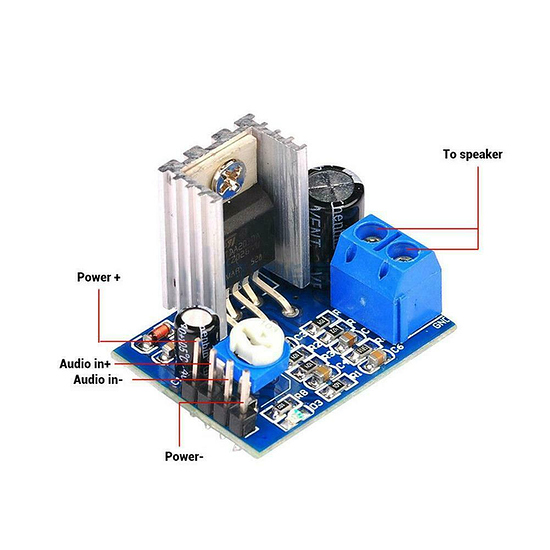 Why the hell is what I did not working??? Adjusting the potentiometer does nothing except change the amount of static I hear. I know that this little module is technically suppose to output directly to a speaker, but I don’t want that. I want to use this module to increase the volume of my super quiet 3.5mm microphone to a louder volume. Doing this within Windows 10 introduces a BUNCH of background noise, which I’m hoping this module would eliminate.

INB4 people tell me to buy a better microphone, I’m cheap and don’t wanna spend $30+ on a USB microphone or proper microphone amplifier, for only talking to friends online.

It’s because the way microphones work. They need a power supply and they superimpose their signal onto that power. That amp cannot deal with that, as it’s not designed for it so it doesn’t have the necessary hardware to make it work. So, it’s either a mic amp or a better mic (USB would do just fine).

OOF. I thought 3.5mm microphones didn’t require a power input into the microphone, and instead only the 48v phantom power microphones required that?

Nope, every microphone requires power. Now, if you have one with batteries inside…

This is my old microphone that I use. Nowhere for batteries lol. Is there any easy way to inject power into the microphone, to then allow for the amplifier to boost the sound? 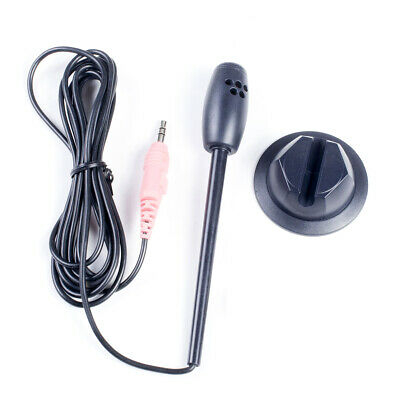 Not really, 'cause there’s more then just power. The signal from the capacitor (the actual microphone) is so low (mV range) that your amp cannot detect it. So you’d need a mic amp anyway.

I guess I was the idiot! Darn alright, thanks for your help!

Is there any easy way to inject power into the microphone

Yes and no.
You need a capacitor to couple the AC-component (= signal) through and block DC. The internet has n+1 opinions on the capacitor values. I would go with something between 100nF and 1uF.
Couple behind the capacitor to ground via 10k Ohm resistor (maybe higher).
Supply somewhere between 2 and 9V of the cleanest DC you can find through a 2k Ohm resistor to the mic.

“Audio” in this case means ready for mic-preamp, don’t expect anything close to line level.

Edit 2: Video on the subject. 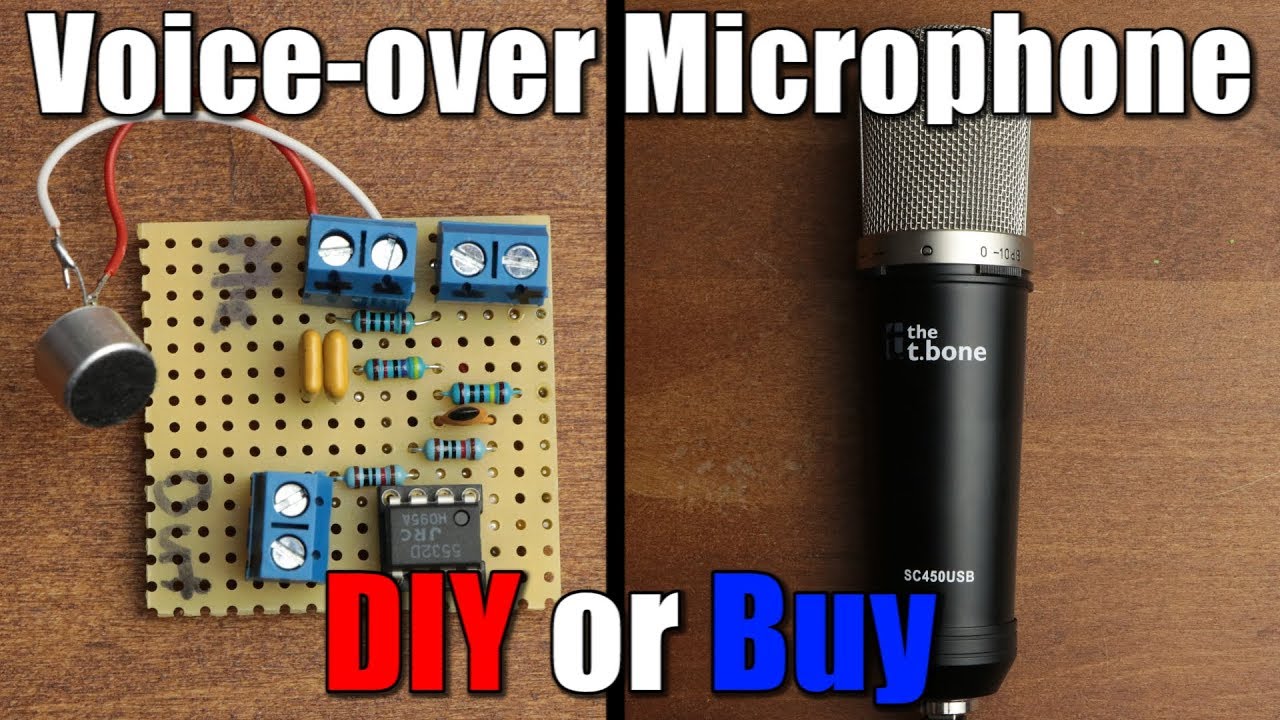 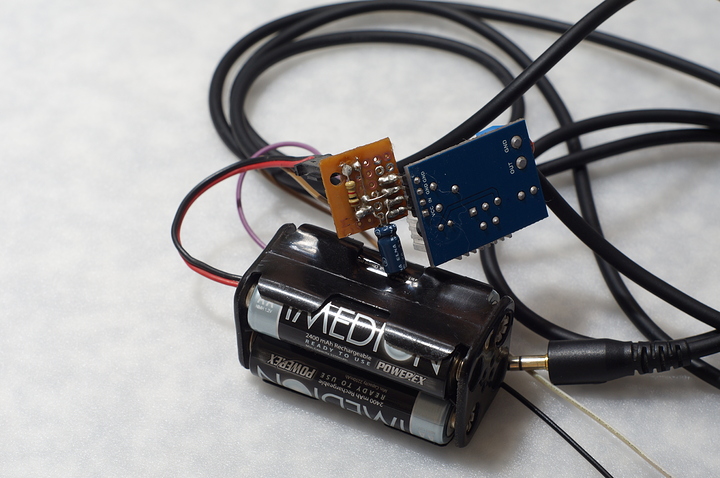 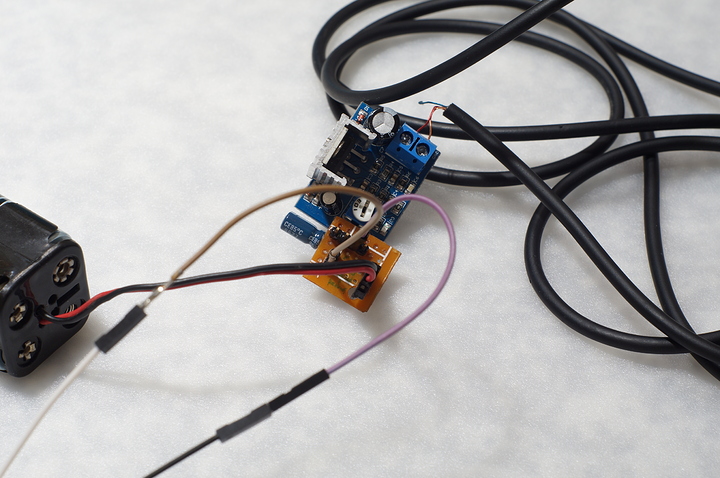 @MazeFrame , thank you so much for the help! <3

thank you so much for the help! <3

Glad someone benefits from the useless knowledge I aquire staring at PCBs and reading obscure circuit design websites.

It’s been a little while, and I’ve ordered some LM317 voltage regulators (to power the TDA2030 module and the microphone) but they haven’t come yet.

I’ve done a bit more testing of different condenser microphones that I’ve pulled from old cellphones, cameras, and other places (some sound better then others, and there are even differences in how loud they are at a certain distance), and I’ve noticed the trend that they all require me to max-out the power of the TDA2030 (ie. turn the TDA2030 modules pot to the max).

Is there a way to increase the volume output further? Currently I’m using a 50v 2.2uf electrolytic cap to eliminate the DC bias (I have lots of unmarked ceramic caps, but I have no idea what their supported voltage is, because they’re pulled off of old PCB’s), and a 1K Ohm 1/4watt resistor, to limit the current to the condenser microphone.

I’m assuming it would not be good to increase the voltage to the microphone above 5v (and that I shouldn’t change that resistor size any lower), and have no idea how changing the capacitor would affect sound quality (or if it would even change the volume of the microphone). The TDA2030 IC itself supports a max voltage of 36v with a recommendation of 18v, and the TDA2030 modules electrolytic caps are rated for 16v (input and output).

I guess I could technically just feed one TDA2030 module into a second one, but that seems inefficient, and not the best way to go about it.

I need advice @MazeFrame and/or others. I can currently use the TDA2030 module as a microphone amplifier (and it does work well and produce a nice sound quality for the price), but it’s still quieter than I’d prefer.

I can currently use the TDA2030 module as a microphone amplifier (and it does work well and produce a nice sound quality for the price), but it’s still quieter than I’d prefer.

Could run it through an Op-Amp or Line Buffer.

Everyones favourite NE 5532 should work nicely. Not sure if that would work from 5V though.

If you are willing to throw some more change at the problem and solder an SO-8 package to an breakout PCB, the OPA 1612 would be an option to run off your LM317.

One circuit I found: 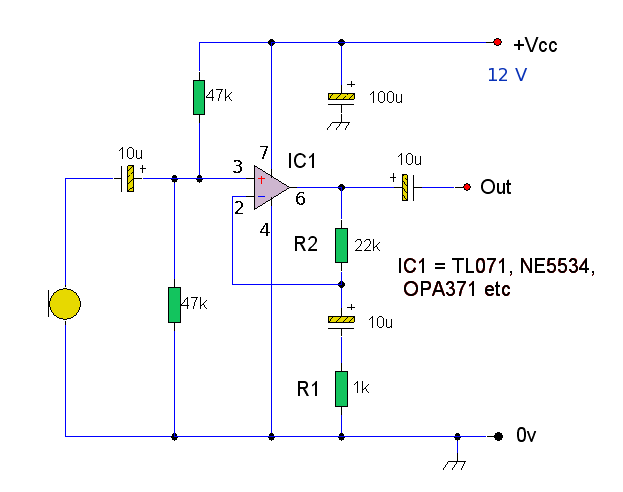 Damn that adds more complexity than I was hoping! Was really hoping that simply increasing the voltage of some of the parts or changing some capacitor/resistor values would increase the Peak-to-Peak voltage at the output! I guess it ain’t that simple, huh?

I guess it ain’t that simple, huh?

It rarely is.
But one Op-Amp with its feedback circuit is not all that complex.

So now I see why you recommended the NE5532! It can be used as a “preamp”, which, according to Wikipedia, “is an electronic amplifier that converts a weak electrical signal into an output signal strong enough to be noise-tolerant and strong enough for further processing, or for sending to a power amplifier”. That is brilliant, and sounds like exactly what I’d need! However, you’re right, it appears that there are no EBay products which support the NE5532 use down to 5V when used as a preamp, but that’s fine.

I bought the LM317 IC’s so that I can “dead-bug” style solder it to produce whatever voltages I desire (which was initially going to be 5v to power the mic and 12v to power the TDA2030). Knowing that both the NE5532 and TDA2030 will both require 12v just makes my job easier.

I think I may go the route of DIYing a PCB for the NE5532 since the IC’s are pretty cheap, and going this route, or I may buy a pre-made preamp from EBay which is also low noise. I’ll need to think about it…

MazeFrame, thank you for being so smart and helping me get this far and teaching me so much lol. I was getting close to giving up and simply buying a cheap “microphone amplifier” which did everything (and likely produced crappier audio quality).

I was getting close to giving up and simply buying a cheap “microphone amplifier” which did everything (and likely produced crappier audio quality).

Can relate to the giving up part.

So I guess I probably shouldn’t look at cheaper than the NE5532 than, huh? lol

I stumbled upon the MAX4466 preamp IC, and there’s a cheap EBay microphone amplifier module which already has it installed. I have no idea how it compares in quality to the NE5532. Do you have any words to say on it?

So I guess I probably shouldn’t look at cheaper than the NE5532 than, huh? lol

The devices I mentioned are ready-to-use 19" rack mount devices with a lot of features.

Chip wise, pick whatever Op-Amp has a 20kHz bandwidth or has some sort of audio listed in its application list. 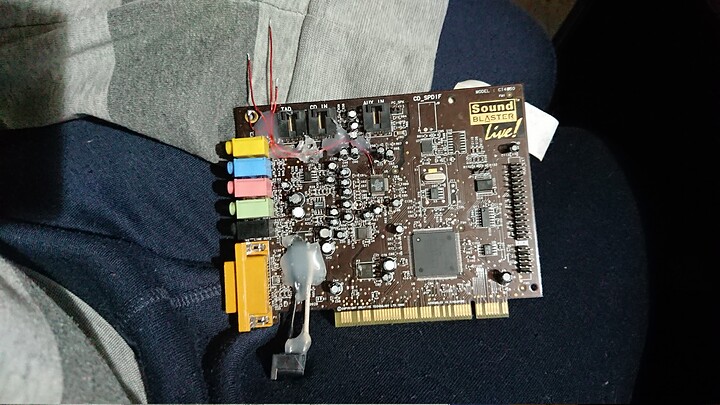 Using some of the things you taught me @MazeFrame & @Dutch_Master , I managed to reverse engineer the microphone amplifier circuit on this Creative Labs CT4830 PCI card, so that I could use it outside of a PC case.

12V is being supplied via the barrel jack in the bottom left (soldered to the 12v → 5v linear regulator; model Ti 78m05).

For the 3 wires at the top, the longest is the ground wire (soldered to the screw hole), the one on the left is an amplified microphone signal (loud) soldered to the right-most pin on the “TAD” connector (“Telephone Answering Device Connector”). The shortest wire (quiet) connects to a solder pad above the (I think) ADC (model STAC9721T), and is also an amplified microphone signal.

Pulled the card out of my junk bin, and was very surprised to get it working on my first try, and within less than 5 hours of research and tracing. I went into this thinking it wouldn’t even work! 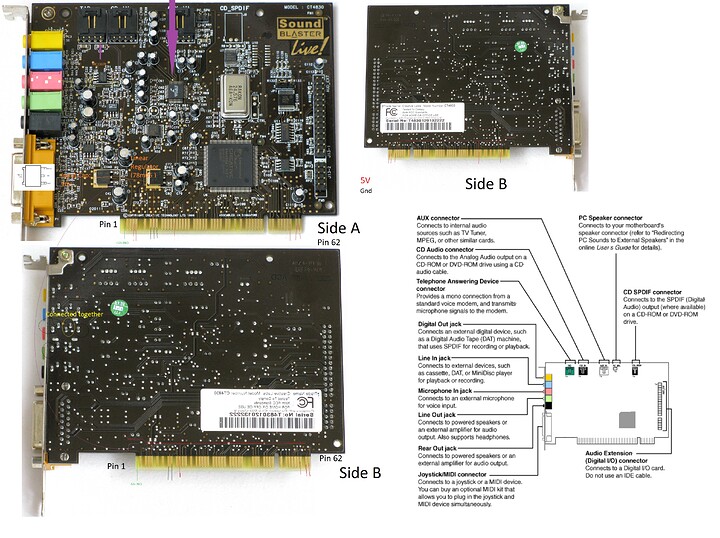 Creative Sound Blaster CT4830 Microphone Amplifier 24072×3044 2.65 MB
(if you zoom really far into the picture, you can see some of the traces that I probed out. The purple arrows indicate where I soldered to)

I still plan to build a micrphone amplifier using the TDA2030 and 2x LM317’s, but am currently waiting for some metal enclosures to come to house it.

For next time: had you looked up the PCI connector specs, you could have saved yourself the trouble of finding the 12V and GND power pins and solder the wires to the ‘fingers’ of the PCI connector instead. Assuming you won’t be using that PCI card in a PC, that is