As mentioned in other threads I’m currently trying to undervolt my 2700X. My default process is undervolting via my BIOS’ offset mode and reducing the voltage step by step. After undervolting I boot into my system, work/game for a couple of days and after that I fire OCCT 4.5.1 (10min, 0 idle periods, 64bits, large date set, 16 threads) for 10 minutes. I read online that most unstable overclocks should be detected in 5 minutes, which is why I doubled the duration to be on the safer side. (I don’t intend to achieve a 24/7/365 stable undervolt, but I don’t like any surprises either

). I have the OCCT results on my PC and if someone’s interested I can upload a requested picture.

Currently, I’m at -50mV and I haven’t encountered any problems so far. According to OCCT my maximum temperature was 47° which seems perfectly fine and I’m hitting 3.949GHz on all cores (with peaks to 3.9GHz).

What I’m wondering is if undervolting might increase the CPU’s clockspeed, because of the way SenseMI works, but further testing should be requied to determine this.

The next value I’m going to (probably) try is -60mV. Once I’ve tested this, I’ll update this thread.

(I know that faster memory would have been better, but I grabbed these sticks when the were on discount on Amazon and I think that purchasing 3200 or 3400 RAM wouldn’t be worth it)

I have concluded my undervolt testing. At -75mV I encountered some minor stability issues, which is why I went back to -62.15mV. I’ve also started to mistrust CPU-Z’s benchmark, because even when running the single threaded test my clock was at all-core lows. (Thanks to @Ruffalo again for reminding me to look the core-clock).
As a result I downloaded cinebench r15 and used it to benchmark my undervolts. My procedure was the following: When I boot my PC I start cinebench and run it 3 times for multi and single threaded. I do this for three days with the same undervolt. After that - and after a successful OCCT run - I try a lower undervolt. Here are my results:

I should be noted that “Stock” settings are the settings used by my mainboard at"Auto", so there might be a difference to a 0.0 offset, but I’m not sure. The percentage values are always compared to the stock settings of course. As can be seen, it is safe to assume that undervolting does not slow down my CPU. If anything, it might get a tiny bit faster

Therefore, I can only recommend undervolting to every Ryzen owner, feel free to aks questions

Does it still boost to 4.3 in single-threaded work? If so, you just might have won the CPU lottery.

You can’t test single-core boost while applying load to the other 7 cores, it doesn’t work that way by definition.

I’m trying to ubdervolt my 1700X in order to lower the pressure on the VRMs. But every time I enter some voltage and stress, the board automatically pushes it to wherever it wants it to be, so it’s not working for me… I dile up 1,1V, and the board auto pushes it to 1,28… And boom - hot VRMs.

I’m hitting 4.35GHz on single threaded performance, so everything seems to be fine

@Steinwerks: @Ruffalo is right, I tried it when running my program and I only hit 4.1GHz in CPU-Z. After the program was finished I hit the 4.35GHz mentioned above.

@psycho_666: According to hwinfo, my idle (and consequently average) voltages are lower, while maximum voltage remains the same.

Nice! Either you hit the CPU lottery or you have really great cooling. Lower temps reduce resistance and thus voltage requirements to hit a given clock stably. More likely a mixture of both.

But I also have Asus’s Performance Enhancer on level 3 (OC) (Asus’s custom version of PB2), so I don’t know how that compares to default settings. I had to enable that and Performance Boost Overdrive to see boosting to 4.35GHz. I haven’t seen boosting higher than that, but with more voltage, more cores stay at higher clockrates and the all-core boost is a bit higher at 4.10-4.15GHz (vs 4.09GHz) depending on workload.

Now I’m trying to see how much I can bring down the voltage and thus temperatures to keep the fans as quiet as possible. I want complete silence at idle (i.e. fans at 350RPM), and light loads. My “idle*” temps are higher around 50C (±10C fluctuations). The -75mV results in the spikes staying below 60C.

Do you know what this Performance Enhancer actually does?

Not precisely. It’s essentially a preset overclock that raises some limits.

Performance Enhancer
With eXtended Frequency Range (XFR) version 2, there are configurable options which can increase boost frequencies and duration. The available options are PPT, TDC and EDC under “Advanced\AMD CBS\NBIO Common Options\Precision Boost Override Configuration”. The BIOS item “Performance Enhancer“ tunes these options in a simple way. Level 1 and 2 rely only on the AMD provided options mentioned. Level 3 and 4 has a few tweaks of our own (with the help from The Stilt) which causes XFR to always boost to the highest possible frequency.

@sceps Thx for the info

Even though my CPU seems to be able to hit the same clockspeeds as when not undervolted, my CPU-Z score seems to suffer. (Further testing will be required to clarify this).

Undervolt still gives similar single core boosted clockspeeds, and the all core might not drop much, but in between frequencies do drop somewhat as well. With more volts I noticed it could stay at the top boosted speed over more cores. Maybe that’s the reason for some drop in some benchmarks. Given the drop in temperatures though, it’s worth it for me. Much quieter. Also gives headroom for days with higher ambient temperatures.

I ran CPU-Z benchmark a couple of times with Auto voltages and -0.25mV and interestingly enough, -0.25 seems to offer a performance increase: 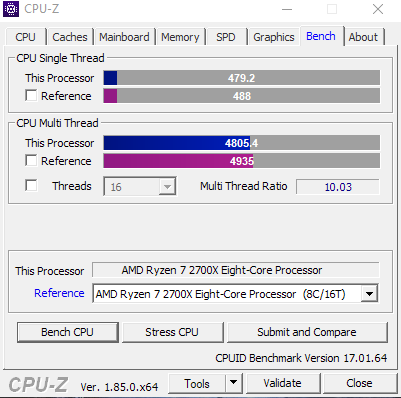 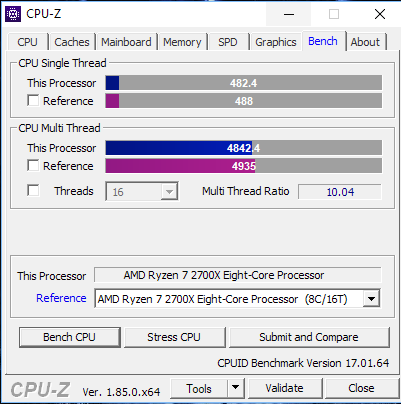 Were you watching voltage and temperature at the same time? I wonder if a little less voltage allows a fractionally higher boost thanks to lower temps.

Yeah, I was/am keeping an eye on both. However, since I’m using a rather high-end AIO I didn’t notice any real differences. I also thought that undervolting might result in higher clockspeeds, due to lower temps, less default voltage being put through the chip and SenseMI picking up on it

Tomorrow, I’ll undervolt with -0.3mV and see how things go.

The bad CPU-Z benchmark results mentioned earlier might have been just bad luck, because I noticed fluctuating results after testing my system a bit. So, -0.5mV might work after all

I calculated the average of 6 to 9* CPU-Z benchmark runs and these are my results:

*) Unfortunately, I only did two runs on stock settings, in contrast to 6-9 runs with undervolting.