Hopefully I’ve put this in the right section.

I’ve had a terrible triple monitor setup for too long now and I’ve been told I’ll have money to spend on it soon!

The main issue is that because I was cheap when it came to monitor stands, I bought a dual monitor stand and then re-used the conventional weighted stand for one of the monitors. It kinda works, but it’s a pain to adjust and just looks as bad as…well, it is! 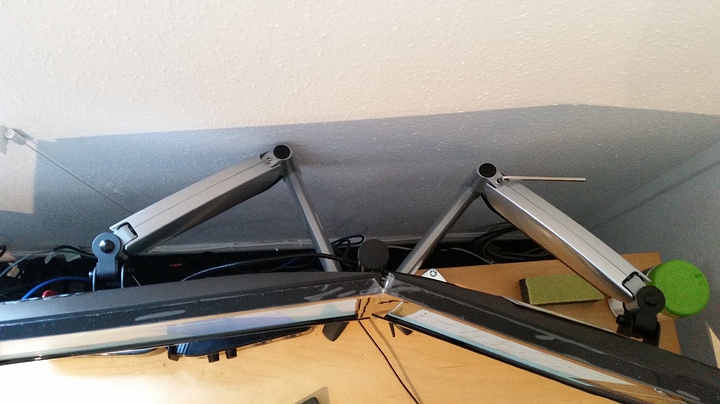 I’m going to re-use a table and make my workspace a little bigger and thought about something like this instead: 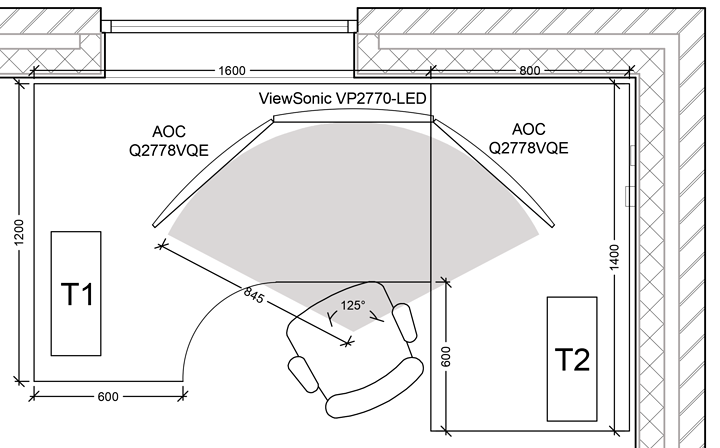 So the question is, what triple monitor mount would suit this situation, the main issue is that it needs to be slim behind in back of the main/central monitor. I’ve had a 9 inch gap between the back of the table and the wall for ages…handy for access, but wastes space in a small office!

Thanks in advance, no hurry at all, funds aren’t with me for a good month or so!

Those are 27’’ monitors I assume from the model numbers?
I haven’t used it, but the Arctic triple monitor Mount looked solid when I saw it once.

Problem with that monitor size is that most triple stands only officially support 24’’ Max, and even there they’re stretching it already.

SpaceCo has the modular system (that’s what Wendell uses), but unfortunately they’re hard to come by in Europe. Ergotron makes very similar mounts, but they don’t officially support 27’’ either, for triple at least…

The Arctic is the only one I know of that officially supports that.

They are indeed - should have mentioned, sorry.

I’ve seen a few stands good for 27 inch, but they rarely mention the physical width it’s able to cater to (when wrapped around) and instead refer to the diagonal size.

Thanks for the recommendation though, I’ve seen this one:

With the Z3 Pro you can plung into a new gaming dimension through surround view and enjoy the game as in an aircraft cockpit.

It’s a reasonable price and takes up to 30 inch displays which assures me a little. I’m going to email them to see if an arc’d setup is achievable.

Yes that is the one I was talking about.

I’ve seen them on Dreamhack this year, and I think (might be wrong) they were using 27’’ displays for the demonstration, and they were in the typical 3 monitor alignment (left and right in a slight angle).

Also has some decent cable management, a lot of the alternatives are missing that too.

It looks very good to me, so thanks for letting me know about it.

I’m in email contact with them, just making sure it’ll allow me to put the desk flush or near flush with the wall. Don’t really want to buy something that just replicates my current problem!

Thanks again @mihawk90 , really do appreciate it.

Just an update, I got this from the company: 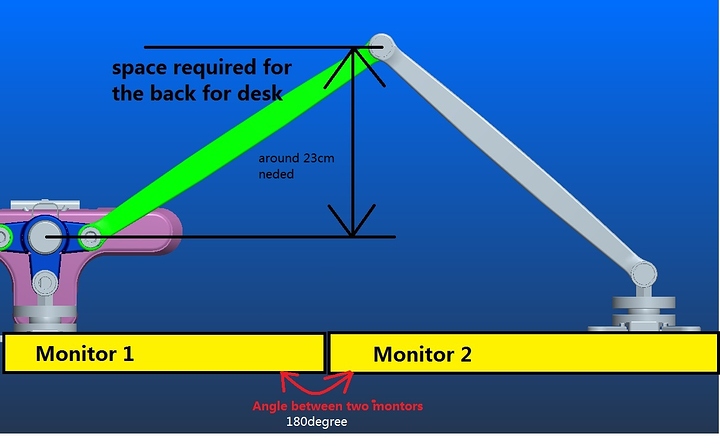 It’s not that helpful, so I’ve sent it back, asking for M1, etc. measurements. It’s a big ask, but it would save me so much time buying, finding it doesn’t work, then having to send it back. …and I hate return postage! 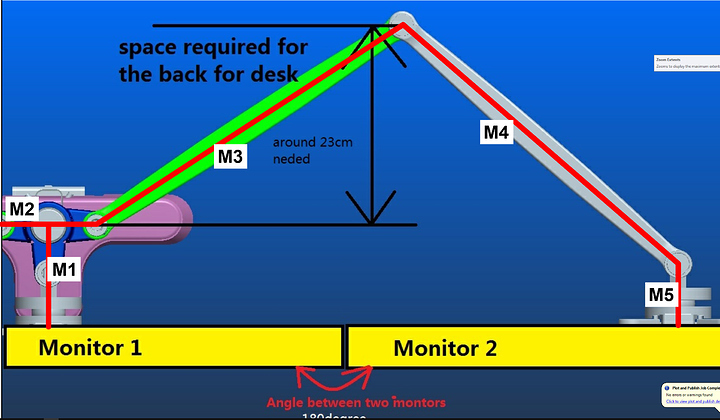 Yeah it requires some space behind the monitors, but I think that gets better the bigger the monitors are because the mounts will be further apart. I think at 27’’-30’’ it shouldn’t be that big a deal anymore. I think that’s more a concern for smaller monitors. On Dreamhack the mount was almost flat IIRC, tho it was free standing so that could be deceptive.

You’re quite right, the gap behind should get less as the monitors increase in size, especially if they’re angled. Wish I saw the dreamhack setup, hey ho, I’ll have to wait to see if Arctic can follow up with some useful info…fingers crossed!

Well, Arctic kindly came back to me with this, which was really good of them. 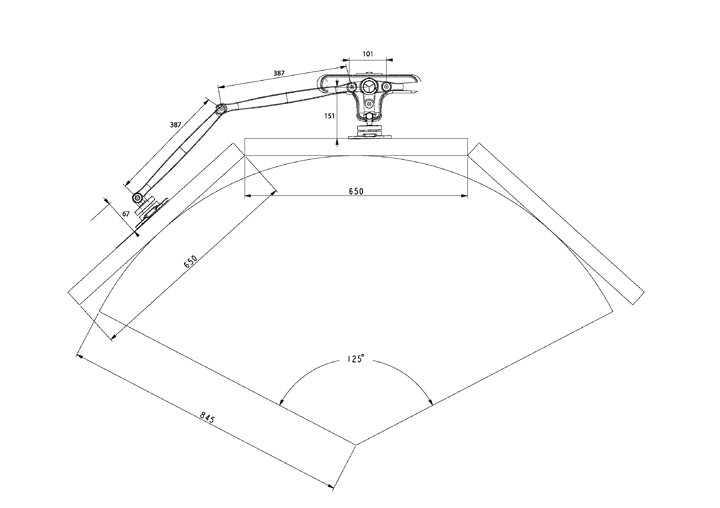 After they sent that, I could see that it would make the monitors too close to my ugly mug

Back to the drawing board, but I least I know!

I have a VIVO brand triple monitor mount. Its chinese but surprisingly good quality. It says its only good for up to 24" but I have a 32" center with 2 24" on either side. They say it fits 3 27" with limited angles but If you make the bezels overlap a bit I think you can get more out of it. 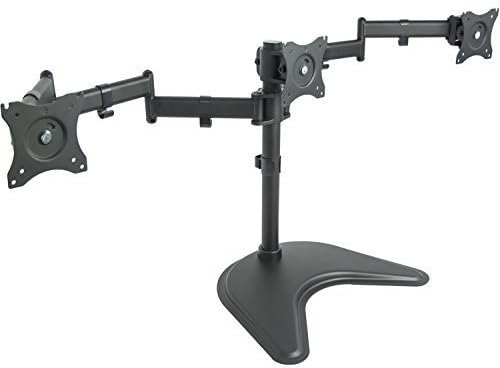 Theres also a version that clamps if the base isnt your style.

I saw those before (under various brands), but I was a little worried because those arms look really tiny

Also with those inch measurements you gotta be careful because they never state what kind of bezel they are talking about… would be much better if the supplied actual dimensions, but what can you do…

Thanks for that, very much appreciated

Agreed, that bits quite frustrating. May be one day, some stand maker will have an online system, allowing you to upload the model of monitor and let you wiggle them around how you want them. Oh dear, think I offered a free idea to the net, whoops!

I’ve been in contact with a company called quadvision. They’re a bit more high end than I’d prefer

, but if needs must. I’ve seen what could be the ideal solution…but…it’s…on…ebay:

I’ve not looked into it thoroughly, but something that really gives me hope is that it has 2 vertical stands aside the central monitor, this could potentially provide the ‘thin-ness’ that I’m looking for. More research needed, I’m actually getting slightly bored of monitor stands, but it’s a nice non-productive change from the norm’!

I can assure you the arms are not tiny. It’s solid as a rock. I can provide dimensioning if needed.

Oh I believe that, I just meant that on the photos they look tiny

Not sure what that’s referring to

Just a little update, I’ve gone for the HFTEK offering, they were pretty good with pre-sales email support - and I found it for ‘only’ £170 on the A m a z o n . I’ll report back if anyone’s interested!

Well the new gear has arrived, might even be able to install today! Here’s the current setup if interested - double holder next to standalone…ummm, stand: 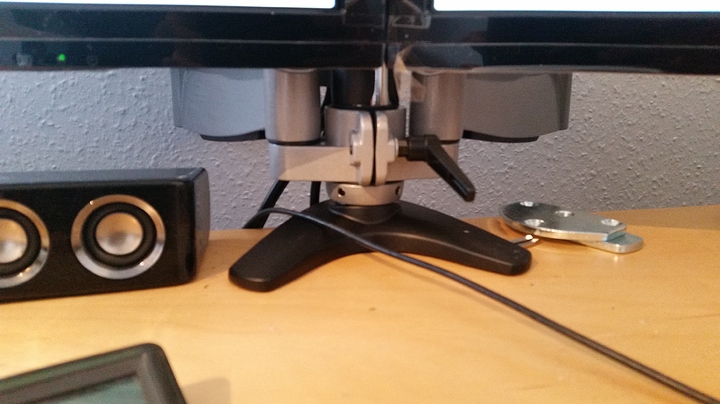 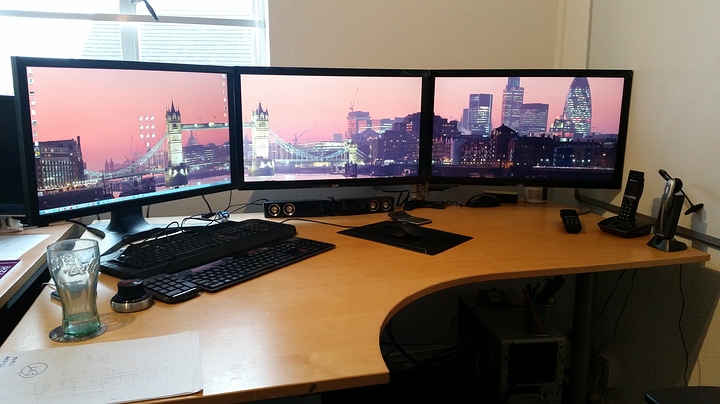