I heard much bad stuff about Logitech, like their stuff brakes VERY fast for example the Logitech G430.
And i do not know if i should purchase their G710+ Keyboard i wanted because i do not know if it will brake fast.

You should be fine - their keyboards are pretty good. The other thing you could do is list exactly what you want from a keyboard and your budget. I'm sure we can come up with several recommendations for you to choose from.

At least concerning keyboards (and peripherials in general) I trust Logitech. I have a G15, G11, G13 and Tk820 keyboards and a G400s mouse, all are still working flawlessly (except for the "-" key on my G11 after a full beer mug spilled on it)

I wouldn't even look at headsets like the G430 you mention, not from logitech nor from any other "tech" and "gamer" companies. I stick to audio brands for audio products, and keyboard brands for keyboards.

If you buy from their list of approved vendors your warranty is rock solid. My G9x got a fray in the cable not long after being discontinued, when I emailed about a refurb/repair they offered me a G502 at no charge.

Also have a refurbished G510 without any issues and a very old set of 5.1 speakers whose only quirk is having the power light suddenly turn off for a few days every year (I like to pretend its on vacation.)

The headsets are great. But they do break quite easy, my brother has a G35 and the joints right above the earcups are broken, have been for the past year maybe even a year and a half. I have a G930, I can't even use it, the battery does not work, microphone is 100% broken, wireless does not work from a non working battery. So I'm using a pair of 20$ skull candy earbuds, the sound quality is not horrid, but the treble is high and the base sucks.

To further cement Logitech's quality, I have had their G602 Wireless mouse for around a year now. It works beautifully as if it is brand new. They have done me well thus far.

Trust Logitech Mice and keyboards? Hell yeah man. Trust some of their gaming products and gaming audio products? Hmmm, some of them, but not really.

I have many Logitech peripherals and have never had any problems with them. They are all still alive and working very well. Same for the people around me that have Logitech stuff.
G110 and G13 (for my main rig)
mx5000 (Wireless Keyboard/Mouse combo for work)
K400 (wireless mini keyboard for my HTPC)
Z5500

I've heard a lot of mixed stuff about G930's (that they break quickly).

From my experience with using their more general hardware, they're usually pretty durable and well made for the cheap look and price.

In my opinion, Logitech makes the best peripherals. I've owned a few products from them, mostly mice and 2 keyboards, those things have lasted Damn near 10 years. They are durable as hell. I totally recommend them.

I'm not sure what people's issues are with the G430s, I have my pair from QuakeCon Last year, and they still work great, and are still sturdy.

My G500 mouse broke in a year. Apparently they have a bad reputation for there cables. Regardless i bought a replacement anyway as I like it so much.

There braided cable did this somehow while using it with my desktop :/ 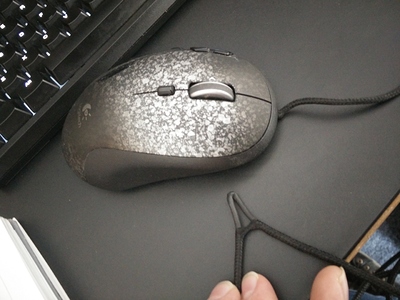 Im not a fan of logitechs headsets.
but I still have a office pro keyboard by them.
its like. 16 years old and survived so much crap.
from moving several times to spills into the keyboard. And pets that like to walk across it

And my g105 has been a great replacement on my main computer .my old office pro keyboard i've used for way to long. Its now my test bench's board

I would say this.
every product is different and some may be more prone to breaking. But this doesnt make the brand as a whole bad.
It just means do your homework on what ever you get

Case Closed, going for the G710+.
For the Headset going for Razer.
Thanks guys!

For the Headset going for Razer.