Needed some more cores to my 3960x and decided to go TR Pro.

Main issue was that with the asus bios 1003 that was required for 5000, most of the USB ports, all SATA ports, and 2 NVME slots were detected with lspci but not usable for some reason in Ubuntu 20.04 and 22.04 even with more recent kernels. Ended up on Manjaro which has been a little painful for somethings.

Very impressed by the temps. idles around 35c (initially thought the sensors were wrong) and maxes out around 70c for the same workload compared to 75c on the 3960x with an Ice Giant.

Excuse the janky paper shroud, need to 3D print one, but lowered memory temps from high 60s to high 50s. 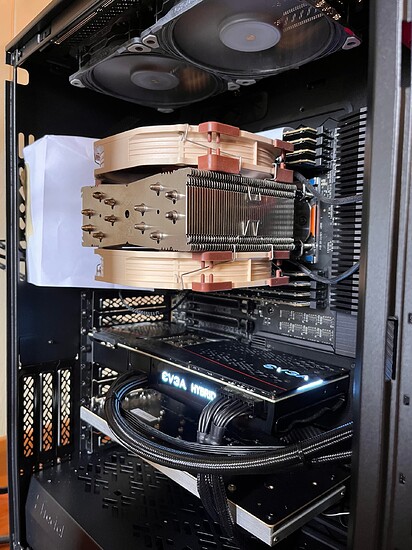 I have a similar build coming soon with the same chip & mobo, hoped to use ubuntu as well… but seems you had problems, I will see if I get the same problems when it arrives.

Also have you tried the arctic freezer 4u sp3 cooler? Might perform better than the noctua and can push air through the back

Unfortunately I think the Ubuntu issue is widespread with bios 1003. There were a couple of posts here of the same issue with TR 3000 CPUs as well. Hopefully with the 22.04.1 release it gets resolved although worked through most of the rough edges in Manjaro so might just stick with it.

Thanks for the pointer to the Freezer 4u, hadn’t seen it before! I had the Noctua already from the upgrade to the Ice Giant which brought max temps from 80 → 75 on the 3960x. I was initially worried it wouldn’t be able to handle the 5975wx, but pleasantly surprised and both are now bottom to top airflow which seems to be doing pretty well with larger exhausts on top vs back.

Good luck with your build!

Did you buy the CPU separately or was it a bundle with the board? I didn’t know this series of Threadripper was available outside of OEM pre-built systems.

whatever gets the job done, be careful a fan doesn’t eat it. That was one thing that I liked about the Lenovo P620, the memory coolers

I’d like to see a Geekbench comparison against the 32-core EPYC 75F3 - I imagine the TR would beat it in most cases due to the clock frequency advantage. Your TR beats my 74F3 by more than 50% in some tests (Geekbench compare).

I didn’t know this series of Threadripper was available outside of OEM pre-built systems.

They are entering retail market as we speak. My local retailers are already selling them. ~3k for 5965WX, 4k for 9575WX and like 7k or so for 5995WX, although prices may stabilze in the coming weeks. But I suspect heavy demand.

OP, very curious where you got ahold of a 5975wx? I’m not seeing any in regular sales channels and when I wrote AMD directly Monday they replied nothing was set for release.

It was through eBay. Not the best prices, but not the worst considering 3975wx and prebuilt with 5000 series prices (and wait times).

If you got one for a price you feel good about then gratz.

I’ll wait for the general release

There is none. AMD never said anything when TR Pro 3000 launched for retail. It’s more like “yeah you can have some, but let’s not talk about it, mkay?”

Prices are in line with prices I’m seeing in Europe , we have retailers selling them for 2 weeks or so.

Thank you Sir for this lead! It is at the advertised price I was expecting so I have one on the way as well. Very much appreciated.

EDIT: I see they are on Amazon now as well for just over $100 more.

There is none. AMD never said anything when TR Pro 3000 launched for retail. It’s more like “yeah you can have some, but let’s not talk about it, mkay?”

The mobo compatibility matrix are still only showing TR 3000 series, so I presumed a “release” of CPU for sale by the public would equate to those docs being updated to TR 5000. I mean, if you are going to sell a CPU, you’ll need to know what works and what doesn’t.

The mobo compatibility matrix are still only showing TR 3000 series

Depends on the board. AsRock and AsRock Rack boards have 5000 series listed. So does Gigabyte

ASUS does not. Will light a fire.

Mine arrives this week. I’ll let you know.

They are listed as you say, but none of the QVL docs have anything save 3000 series CPU. I sent an email to their tech support people asking for it to be done. We’ll see what they say.