Thoughts on the new MacBook?

This is made in now way to be an apple hate thread. Please don't let it become one.

The incredibly thin and light MacBook features sixth-generation processors, improved graphics performance, and up to 10 hours of battery life.

Bet you everything will be embedded including storage and WiFi. No upgrades for you

Edit: this is thinner than the air, the air always felt like it would explode if you sneezed on it so will this macbook actually do it?

It seems like a really expensive reply to chromebooks. Lack of ports, and lack of power mean you can't really do much with it other than surf the web.

It may not look at good, but you can get yourself an acer c720 off ebay for $125 that will do as much, if not more than this Macbook. And you wont have to carry around a bunch of dongles with the c720

I think it is probably underpowered at this point. It will probably require another gen of Intel chips before it is decently powerful.

Overall I'm glad Apple is releasing this as it will push other manufacturers to improve their product and will accelerate the use of usb 3.1.

Yeah the single port kills it for me. I'd like to not have to unplug from charging just to plug something else in. I assume hubs will exist for this thing but still. Also going to have to get a converter for any standard usb 2/3 device

There's a touchscreen version too (C720p). If I were to get a net book, it'd be my first port of call. There aren't many situations where I need a net book though, so I can't really justify buying one - most of the time I'm sat cosy behind my PC because, well, I'm lazy.

I agree with you on the "expensive reply to Chromebooks" thing - it makes it seem kinda ironic how their first title on the "design" page for the thing is...

I used to own the c720p. It's a wonderful machine and I will never go back to non-touchscreen laptops. I specifically meantioned the non-touch version however, because this macbook is non-touchscreen.

So is this replacing the Air or they selling it along side of it?

It seems pretty worthless to me. Not much CPU power, only 8GB of RAM with no option to upgrade. No storage upgrade. Only one damn port....

Plus the battery doesn't last as long as the Air and it is $1200. Why would anyone buy this? Get an Air.

Ohh God it is fanless too? Can't wait to see it overheat.

The new Core M chips they don't really need fans because they use so little power. If they used a small spacer or even some thermal tape they could make the whole case a heatsink for it.

A part of me died inside when he talked about a single port...

I don't understand why is there such an obsession with anorexic hardware. Just make the components smaller and put more inside. No need to make it as thin as an IPhone. People at Apple are silly. And stop talking about innovation if you patent the sh** out of your components.

I'm glad someone sees this the same way I do. Especially since they are throwing a "Retina" display in there I can't wait to see it try to drive that display while sitting on someone's bed.
Personally I don't see any reason I would take this new macbook over the new Dell XPS 13 except if I was looking for a fanless device, but honestly even a iPad does that one better.

Only thing I like is that it comes in black.
- More expensive
- Less battery life
- NO MAGSAFE
- Non clicky trackpad
- NO MAGSAFE
- 1 port
- NO FUCKING MAGSAFE!?
I think the 2013 macbook air was/is close to the perfect laptop for me but now there are 0 reasons left for me to get another apple laptop. Looks like i'll be sticking with what i've got for a while.

That is the thing. It is worse in every possible way, except for the display, than the Air. But it costs more...

That particular chromebook can be unlocked if you are willing ot take the back off, voiding the warranty. Once unlocked you can install all your favourite operating systems on it.

But its interesting to notice that the chromebook costs over $100 less than the acer aspire notebook its based on and includes the resources to unlock itself with nothing more than a piece of tinfoil an internet connection and a screwdriver.

NOTE: I dont know if there is a way of returning it to a chromebook again. I have also done this myself and can confirm that it is possible.

I think its more like a surface / iPad pro as far as target goes.
It will do things an iPad won't do but with that sort of power level in mind.

If it has 300Mbs + wifi I can live with just the single usb3c connector. I dont use DVD's anymore, and I shocking only use usb's to install operating systems nowadays. I will immediatly dump the default os and install debian. If it is actually sturdy then I would have no problems with it. I hope they still make them out of one piece aluminium. But this would still be a really nice high quality laptop. I dont need a billion hertz cpu either. Until I win the lottery though, I got my cubieboard2 and my zombie of a desktop.

gotta love that logic board. 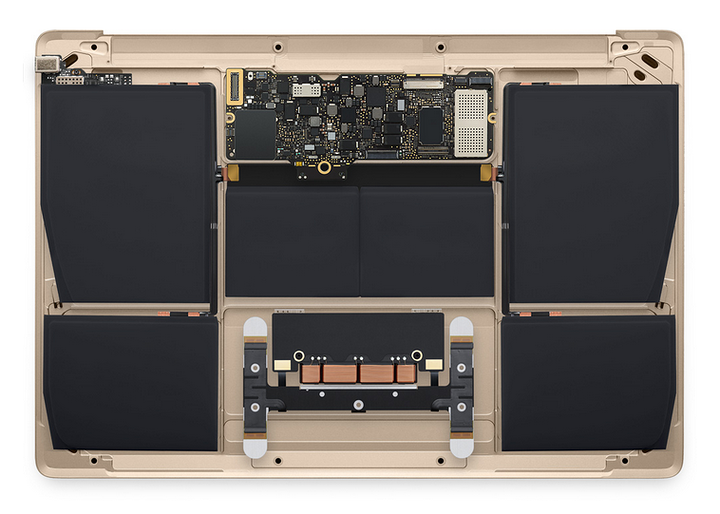 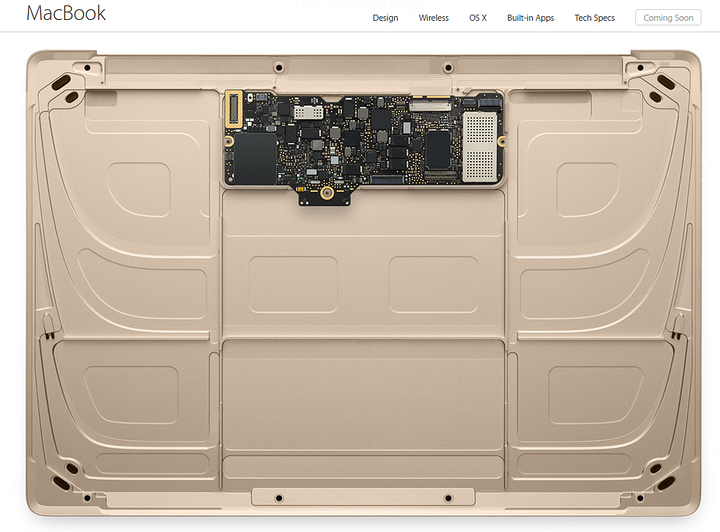 On a serious note though, people can hate on apple all they want, but lets be realistic at least for this very point i'm going to make. I think this is going to get the ball rolling, for the USB 3.1 Type C connectors to start making it on other laptops/tablets, maybe even the surface pro. so i don't hate when apple does something like this, i applaud them. now what do i think of the laptop overall? i hate that apple keeps pushing this "Anorexia" campaign on their products while sacrificing on the battery. and for some reason every other company seems to follow through with this. Cough Samsung Cough

Overall good for them. We need more Innovation in the Tech Industry. on a side note, someone take away Johnny Ive's cookies and give them to the rest of the company. cause he clearly doesn't know what the hell he is doing, besides making things look good. and i'm referring to his in-denial comments about battery life on their iPhone.

Yupp. Apple really wants to be the first company worth a trillion dollars xD
PROFIT PROFIT PROFITS BABY! I WANT MY LAPTOP TO BE GOLD!