Thanks to Squarespace. If you need a website, check them out. We use them for our store. Use coupon code "teksyndicate":

Get over to the store!

'We're just rentals': Uber drivers ask where they fit in a self-driving future | Technology | The Guardian

Court rules that ISPs do not need to give up information on alleged pirates, copyright infringers | Privacy Online News

AMD shows its Zen CPU can compete with Intel&rsquo;s best

Facebook and Unity team up to launch a Steam competitor

This is a companion discussion topic for the original entry at https://teksyndicate.com/videos/tek-0245-replace-all-humans
4 Likes
KuramaKitsune August 22, 2016, 9:29pm #2

You seem quite buzzed in this one (the first bit alone in office). It's a great episode. :D

One thing that's starting to annoy me right now is this idea that the youth/young today (Do I still qualify as I'm 30 this year?) are more open to or wanting more automation. I just hate the idea of every car on the road being a self driving one just irks me. It's all fine and good having Google, Uber, and Elon Musk paving the way to the "future" but what's ths point of them all if there are no Charles Yeagers to test things?

Is this the first Tek with only @Logan? 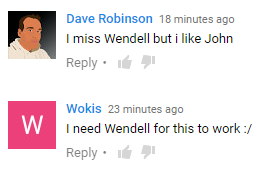 I hope all those people are woken suddenly in the night with explosive diarrhea, and no power in there homes. They have to navigate to their bathroom in the dark with a floor covered in Legos.

I hope all those people are woken suddenly in the right with explosive diarrhea, and no power in there homes.

Disclaimer: I'm a pilot with 20+ years of experience and I hate being a passenger regardless of who is driving.

Regarding pilot-less aircraft; while I can see benefits and recognize that the technology already exists it would take many years of incident free operations before you could convince me to ride in one.
Airbus was the first to implement computer augmented fly-by-wire (Human Proof) systems in their airliners and there is one incident where the computer ignored pilot input and caused a crash.

And quite a few others where the computer system was suspect.

With its human-proof computer systems, it is the most technically advanced aircraft in the world.

Boeing utilizes computers and automation systems but the pilots have the final say in what the airplane is going to do. On the other hand Airbus says our programmers know more about flying than pilots.
The problem with computers flying your aircraft comes down to the old adage 'garbage in garbage out'. When a computer glitch points your aircraft at Terra Firma who is going to take over the controls?

I was at a seminar where the head of Uber in Australia & NZ was speaking last year. I asked questions about self-driving cars because it kind of seems like the obvious direction to me (turns out now it is). At the time, he was still talking about how they are a technology company, not a taxi company. They were more interested in owning the IP to the app than owning any cars or employing drivers. Rather they see drivers & riders (is that the right word?) both as customers. Even with self-driving cars, I think the idea will be less about them owning a fleet & more about people having their cars out earning money for them while they work or sleep.

Indeed.... showed up to say something... but no need. Thanks Ethereal, lol.

I think the cam had beer goggles On this episode :)

Also, I met John at Ground Kontrol with Logan and Qain. Cool guy.

Logan...How soon can we get self driving cars,planes, buses and trains. AS FAST AS BUSINESS can push it through government. The business's will make huge bank removing people from their companies. No human idiots, no payroll, no medical care, no harassment, the list goes on and on. We as people are nasty little beings.

Companies only want money nothing else.

That was a nice episode, I liked the old school randomness of your humor.