The most heart-clogging thing you ever eaten?

Caption says it all, what was the most heart-clogging thing you ever ate in your life?

There's is this restaurant and bar here in New Jersey called House of Brews, the food there is pretty good. I forgot the name of it if you want to try it out, but it was this massive cheeseburger with grilled cheese as its buns and I topped it off with bacon, some onion rings, and I put tomatoes on there because I really like tomatoes.

Yes, I did eat it all, my stomach didn't like me afterwards but my mind didn't regret it at all, it was a pretty good burger.

A stick of butter. Salted.

Ewwwww, why would you do that? That's nasty

I eat french toast regularly and I use 2 sticks of butter and half a bottle of syrup on on average 8-10 peices. After eating all that you feel pretty funky.

probably the time I crammed 2 cheeseburgers and some fries into a Big Mac. Fuck it was a big burger, and was definitely not a healthy piece of eating.

One time I had 2 double bacon cheese burgers, and a plate of fries at Five Guys. I was kinda hungry.

Something called a "Jasperizer" from a small take-away called "Cap'n Jasper". I'll try take a picture of one sometime, but it's basically everything you could ever put in a burger (times 2) in a bun.

I may be biased, but the "Jasperizer" is a great name!

My friends "Chocolate Death" (which I named)

Basically its a 2" thick slab of gooey chocolate (about 4" square), thats been made in a way that is full of sugar and doesn't quite let the chocolate go hard. So it has the consistency of a thick caramel. She also breaks up oat biscuits into it so there's something to bite on.

This stuff seriously sticks in your teeth and you can feel it drop into your stomach when you swallow it. One friend said it felt like he was going to have heart palpitations just 2 bites in. So hence the name I gave it.

I think the worse thing I ate was a Double Baconator from Wendy's. I thought I was gonna die after eating it.

A funnel cake at the NC Seafood Festival.

That is a monster burger... Id rate that up there with my top heartcloggers too.

This from KFC. The "Double Down". Never Again...

Its Been nicknamed the Heart Attack Burger.

2 Pieces of Chicken Breast, 2 Slices of Bacon, 1 Slice of American Cheese and 1 Slice of Pepperjack Cheese,

My stomach hurts after reading this thread. 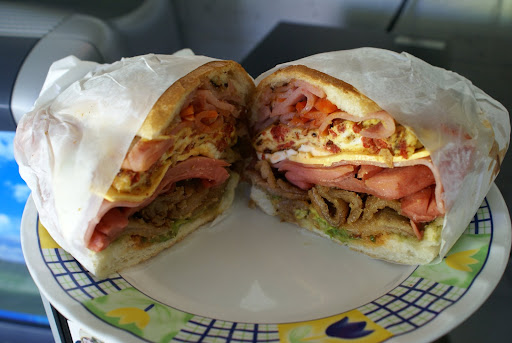 These sandwiches are around 10" long, about 4" high, and they are pay one get two.  Takes me a whole day to finish both.

When I used to live at home, my parents had a deep fryer. When the oil was on it's last fry, my dad would make deep fried hamburgers. Basically a 1/2lb burger stuffed with old cheddar cheese, breaded in bread soaked in eggwash and dusted in flour and spices.

I could only eat one and that was the end of my meal. Tasted fantastic, but could potentially kill a small child.

That, or camp food. My dad likes the "mostly meat breakfast" while camping (Bacon, sausage, chicken, steak, eggs, potatoes and lots of em). Also, every May 24 weekend my friends and I go camping with 10kg of bacon (22lbs) for 3 days. At least there's usually 10 of us.