So, logged in to steam, and the library page is all updateed and stuff.
Like a dag nam movies site or something.

I’m not keen, but it is change, and change shakes off cobwebs, so going to give it the old college try!

First things that put me off:
changed default view: I had it set to only show installed games. Easy enough to fix/ change back to useful.
Flat list of all games, no indication of what is available and not, kinda like the point above, but a long list of all the steam games I have (including a load I’ll never play) kinda distracts? Again, easy enough to fix.
Some games don’t have a cover/art
Some games are repeated if they have different components/expansions.
Some games are repeated, even without expansions/dlc/sequals

First things I like:
The movie style interface does look good, for the games with art.

If I used big picture, or was disabled/used a controller, this might even be a good change.

Well, I guess I am not keen, but that is just me, and my first impressions.

The beta allows for opt out, but I will try it, and see how it goes.

Has anyone else been affested by this issue?

Anyone have any thoughts?

Is it just my set-up (Ubuntu) or do other people also have funny cards for some games? maybe due to resolution of store picture for games?

Anyway, this is how mine looks 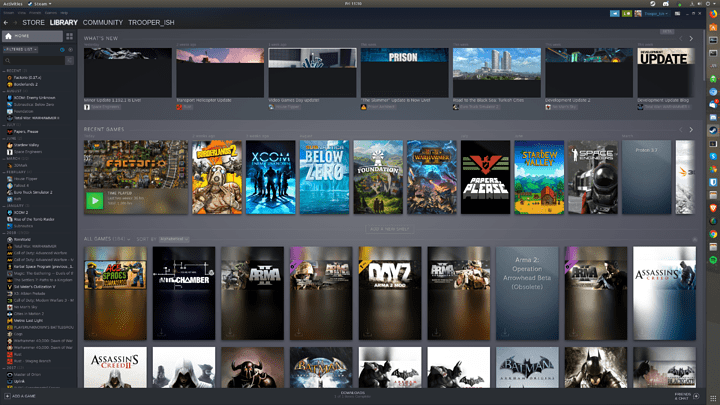 By funny cards, I mean some of the games have full/portrait pictures, and some have letterbox/landscape pics.

Maybe because the store page has either 16:9 or 4:3 kinda resolution thing on the main image?

as long as the list view on the left didnt really change then I’m ok.

The beta allows for opt out

So need to find this. I prefer the less busy and more wordy style of the old one. The rest of the new interface is nice but the game pictures are not.

I thought it was easy to change, but it’s not so easy…

I was looking at that, but sadly no. just give feedback which goes to the steam discussion pages, or change log.

I can opt out of the entire steam beta in general but kind of wish I did not have to.

Huh, you’re right, I read changelist as “change list” and mistakenly thought it would change the list. edited above.

Wouldn;t it be better for them to make this change as a “skin” and chane through the menu system (and back as needed)

Yeah as a skin would have been better…

Okay under Interface in the settings you can choose Automatic, Small, Medium or Large icons.

Small is not much smaller. Though in the top left, above the game list (which is nice), is a Home button and next to that is a square of 4 squares, this makes the icon view you categories which are much smaller and nicer looking.

EDIT: The interface is so slow to change view, load new sets of icons or even animate button hover overs, this is a serious back step.

This I like though. but I still would like to be able to change many things with it. 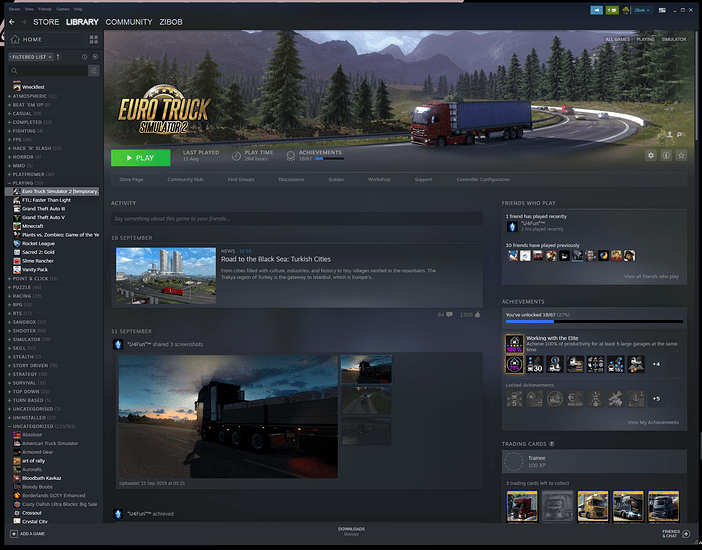 If I could put the big column in the centre that is currently friends activity and make it the smaller column on the right that would be nice. Further it would be very nice to be able to rearrange the boxes in the right hand column, like to move Friends who play down and mt screenshots up.

OKAY! I have gotten somewhere.

In the interface settings there is an option for Low Performance Mode, this greatly increases the speed of the interface transitions and to a degree the look too, though I am undecided on this I kind of liked the coloured categories in the first screenshot. 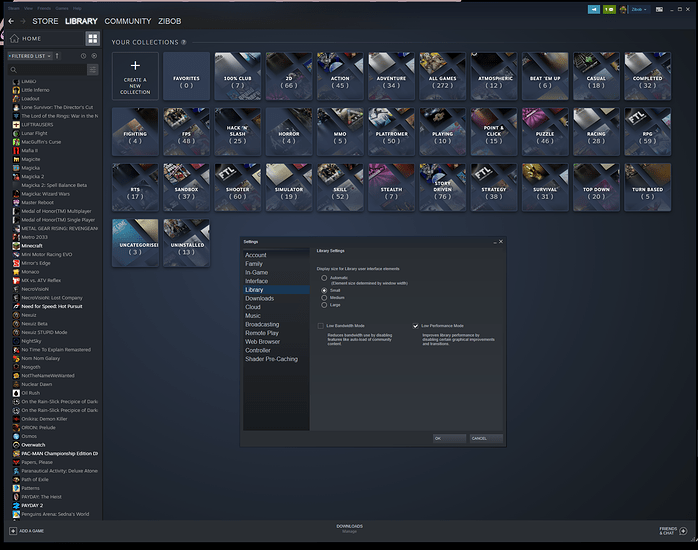 Nice. I like the “movie poster” type look to it. It should be the default way for video games, movies, tv shows to be shown

I still don’t steam. I just saw your photo.

This is now pushed out to everybody. For big collections, make sure you have 16GB of RAM cause it’s all using Chromium. (And Chromium on something of this scale is a RAM hog, and it has to background download EVERYTHING for thumbnails.)

Worse yet, it AUTO enables GPU acceleration (which is still broken on Linux) once it upgrades, so be sure to turn it off.

The Library screen now blanks out often and the CEF processes keep crashing.

Yeah I am still using it since the beta but not really liking it. The performance is just bad is the main problem but it is also harder to find things now and I am less likely to look at the related things like news and discussion pages.

My main annoyance is that it does not remember where I was and always defaults back to the main overview when I click back to library or when starting steam.

The wine steam, I presume you mean the “windows” version of steam, run using Lutris/Wine?

I hadn’t considered it to be fair

A blank screen is pretty bad though; I would take a bad screen that is consistent, than a good one that crashes.

Would one be able to raise a bug on the lutris site / github,

Yeah, I let GloriousEggroll know, because Wine Steam is the only way to launch Valve’s CEG DRM protected titles, because it doesn’t work in Proton.

Nice one.
Now I’m off to DDG CEG DRM…

And I guess it pre-dated the Linux version, but they might have still implimented it?

Today I learnt, Thanks!