You probably heard that some time ago, Steam switched to the system where 1€ is the same as 1$ or eaven more. There is a Steam group, but we need more awarenes http://steamcommunity.com/groups/1e1us. Loga if you can cover this in The Tek so people will know, that how expensive are games in EU.

You have to consider that a lot of EU countries have higher wages and higher living costs and 1€=1$ will sort of make sense. Steam also has a second tier in EU for less wealthy countries. CS:GO is 10,99€ for me so Valve itself has their own games prices more fairly.

Also the prices are controlled by the developers and not by Steam/Valve, as my previous example proves. And in some cases it's even worse. Example Deadpool. 49.99€ in EU(39.99$) and for this game that includes the tier2EU as well. And this also shows that not all developers use the tier2 option.

Steam/Valve does not care how the games are price they just take their 30% cut of whatever was payed.

And you didn't even consider Australia. They get shafter 95% of the time even if you consider the economic state of the country.(Australia is also missing from that site)

And if you want fair price go buy it from GOG. Though even they got sued by some EU court when The Witcher 2 was released and GOG had to change the pricing in different regions.

And before you go around pointing fingers do some research and then point at the people responsible.

Australia dosen't even pay in our own money. We have to use U.S currency to buy games. 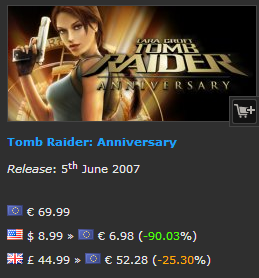 What you could do if you wanted is pay $5 to get someone to set you up an account in the US on craigslist and buy your games through there and then gift them to yourself if you really don't want to pay the international rates.

Not sure what the tax implications of all this are though as I know that in Australia, tax is included in the price and in the US it is not, could account for some of the discrepancies.

There is no tax on digital games in the US.

The other problem is that AAA games in Australia are priced at about $20 above US prices about 90% of the time so about $70-80 for a new game, CoH2 for example is $79.95. Admittedly we don't lose out as badly for indie games.

Down here game prices aren't too bad, the real ripoff is attempting to get hardware. Stuff can get real expensive.

Just another reason to boycot EA in my opinion.

Not really.  It's a logical business move.

EA say the reason is to clamp down on people accessing the region’s lower prices through VPNs (IP masking services that allow you to trick websites into thinking you’re accessing them from a country of your choosing). Considering the previous launch price of 999rs is close to £10 you can see the incentive of bypassing the EA store’s region lock.

But that is not the correct way to do that.

Steam checks your billing address and CC to see if you are making the purchase in your region and if not then your account gets locked.

I haven't traveled but I can imagine that Steam does not cooperate well. They could use the CC information to tie your account to a region or something.

Valve is a company based in Europe, in the Grand Duchy of Luxembourg.

According to EU VAT law, throughout the EU, in sales to private persons, VAT has to be calculated in the country where the good or services are provided, which is Luxembourg. Luxembourg has the lowest VAT rate in the EU at 15%.

Therefore, 1 EUR has to be calculated as 1.15 EUR in the EU, which amounts to 1.48 USD, not 1.15 USD. Given the fact that there is no sales tax or VAT in the US for digital distributions of entertainment software, that means that European customers have to pay more than European customers for games at a price setting whereby 1 EUR is 1 USD. Otherwise calculated: 1 EUR is 0.78 USD, 15% VAT on 0.78 USD amounts to 0.897 USD, therefore Steam steals over 10% from European customers, even though it's a European based company.

From 2015, Luxembourg will raise it's VAT rates to 17-18% (and then it will still be the lowest in the EU, normal would be about 21% on average). I wonder if Steam will raise it's prices for EU customers at that time.

This is partly why Steam isn't as popular in EU as in the US. Generally, games are priced according to the market. For instance, a new AAA game that would cost 60 EUR incl. VAT on Steam, typically costs about 50 EUR incl. VAT on DVD in mortar and brick stores, and costs about 45 EUR on European digital distribution online retailers like mcgame.com or the likes. Then the pricing in mortar and brick stores is also hugely variable from country to country in the EU. Countries that don't have Amazon or Google store or other large US digital distribution shops, like Belgium, are usually a lot cheaper in games than other countries like Germany, that has big US online retail. A game that would cost 50 EUR incl. 19.5 % VAT in Germany in DVD format, would cost 30-40 EUR incl. 21.5 % VAT in Belgium.

So, not only does Steam steal from EU customers in it's pricing, but they also lead to high prices in the US just like any big online retail organisation seems to do. So in Europe for instance, there is the strange phenomenon that computer hardware is much cheaper in Luxembourg or Germany than in Belgium, but at the same time games are much cheaper in Belgium. There are quite a few products with huge price differences between countries in EU, like gas, tobacco, coffee/tea, alcoholic beverages, lemonade, USB flash drives (for instance, a USB flash drive that would cost 6 EUR in the centre of Germany, will cost at least 25 EUR in Belgium because Belgium has a copyright tax on flash memory because the government esteems that anyone buying a USB flash drive or flash memory card will use that for "illegally" copying copyrighted content, and near the border with Belgium in Germany, where Belgians go to buy flash memory because of that stupid tax, that same USB drive will cost 15 EUR, because they see the market opportunity, just like the coffee, tea, chocolate and tobacco shops in Belgium near the German border sell huge amounts of their goods to Germans, because these things are cheaper in Belgium than in Germany. That's just how it is, that's how free economy works. It just seems strange to Americans to have different prices every couple of hundred kilometers because it's a completely different country, but for most EU citizens, it's perfectly normal, after all, a couple of years ago, all of these countries would have their own currency. I would literally always have 3 or 4 currencies in my wallet at all time and still have a huge jar of coins of 8 or 9 different currencies from living in the EU before the EUR came about.

Think about this: Steam sells in Belgium, where it is illegal to sell with a loss 10 months per year, and this is fiercely enforced with high fines. Still Steam has sales whereby AAA titles can be bought for 5 EUR incl. VAT during those periods, so they are not selling at a loss. That means that when they sell the same game for 60 EUR when it's not on the specials list, they have at least 55 EUR of pure profit on it.

Yeah, I've had my account locked down just for logging in from different places.

I didn't know Latvia was a wealthy country.

Neither did I, although from the site that SeljD posted Latvia is listed under the second tier.

Latvia is actually in second tier but the thing doesn't make any difference because almost none of games have different prices for second tier.

US currency with prices set roughly $20 higher (AAA games) than the US steam store too.

P.S. correct me if I'm wrong on that.

Thats a incredibly stupid way of looking at it...lets put it this way i can buy from the US for allmost 1/2 price so by that reasoning EA needs to rise the price of american games too and then where will that end?

It is incredibly easy to look up a ip and see that it is in fact a VPN it dose not warrant raseing way past the cost of liveing to 1.3 billion people in india because EA cant get there shit together.