Realized, we did not have an entire space to talk about Star Wars in general so decided to create this lounge area to do so.

Last night during the Super Bowl Lucasfilm released a trailer for its next upcoming film “Solo: A Star Wars Story” which is directed by Ron Howard. The film will be released on May 25th of this year. GMA released the official full length teaser trailer and I will embed that below for those who did not see it yet.

Looking at the trailer, the CGI is very lifelike. Definitely the best film done by ILM. But hopefully the story matches that of “The Han Solo Trilogy”. I never read a lot of books cover to cover, but I did read “Rebel Dawn” cover to cover and it was the best book that I ever read. Solo has a really cool backstory so I would love for the film to match that story.

The cast for the film looks pretty good, although after seeing Micheal K. WIlliams on Vice’s Black Market, I think he would have been a perfect fit for the film, but he was replaced as he could not be at the re shoots done by Ron Howard, after Kathleen Kennedy replaced the original two directors of the film.

Looks good…Does not change the fact that i have zero curiosity to actually watch this story.

How did you interpret that from the trailer?

The “star wars story” films are shaping up to be the better half. I really enjoyed Rogue One simply because it didn’t try to be anything it wasn’t. It wasn’t a message to anyone, it wasn’t an attempt to show a fanbase that the new owner of a franchise could make a good movie, it just did it’s own thing and did it well. If Solo just tells the story and gets out of it’s own way, we’ll be fine.

This one’s looking good so far, but TLJ really destroyed my trust in Disney to make a good Star Wars film. I think I enumerated my grievances about it in another thread, so I’ll spare this thread the wall of text.

They killed the SW for me. I disagree with almost everything In all new movies. So it’s safe to say I don’t care about anything new they produce.

I might check out IX just for closure tho.

Suggestions why not call the thread Star Wars Cantina instead? Cantinas are in Star Wars.

On the topic of Star Wars itself. I know there was and are people upset about the Expanded Universe being wiped or just called legacy universe [if I recall]. I loved the Thrawn Trilogy. I Jedi was also excellent. I haven’t had time to look at Star Wars books lately.

I bet 10 years or so ago you were begging for more.

Nah the prequels cured me of that lol.

The last thing I wanted was an origin story, of any character. I liked Rogue One as a standalone movie. This smells all cash grab.

Count me in for the part of one of many cynical old drunks in the murky backdrop of the cantina.

Who came up with that name? Not very child friendly at all. But the music is very awesome, every year they should release an album. I would buy that. 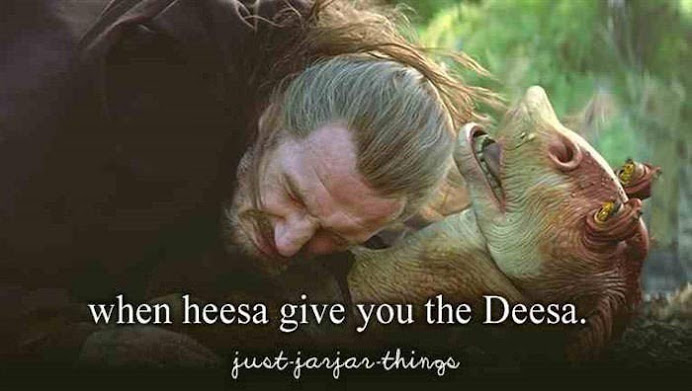 With them killing every major character, it seems to me, that they are appeasing the people that always complain that “the hero/main character never get killed and that makes the series stale”. But in reality, in having the major characters be immortal, you get to invest your insight into that character.

I don’t know if they will ever stop killing of the characters or not. But I would imagine that that would be a good way to kill a franchise. I would never be able to imagine Batman or Superman movies/comics/TV shows without them in it and therefor wouldn’t watch it.

The darkness clouded his judgment and most likely his ability to perform.