[Solved (Kinda?)] Yet Another "Gaming on Linux" Thread: What's Your Setup?

[Solved (Kinda?)] Yet Another "Gaming on Linux" Thread: What's Your Setup? Linux

Appreciate the responses everyone! I recently flashed the BIOS and installed Kubuntu on 100% of the drive. This seems to have helped significantly. I don’t know if sharing the partition with NTFS caused a false “hard disk full” with ESO + Proton, and I’m not sure if that impacted the performance either. Some games still lack optimal performance, such as Deus Ex: Human Revolution. Elder Scrolls: Online, however, is fully functional. There is some brief lag and stuttering at the beginning, but after about five minutes (maybe all the assets have loaded?) the game runs fairly smoothly, with slight lag now and then. The lag is not detrimental to the game, it is noticeable though. CS:GO works a lot better, but it does still have the long load time and the occasional stutter. As of now, I am content to run ESO on Kubuntu. That is the only game I play in my spare time. I have a few “shared” games on PS4, like the Deus Ex games and Diablo III. PS4 is running on FreeBSD so I’m still gaming on *nix ayyyy lmao DEAL WITH IT. I will try other games when I have time. I am thoroughly impressed with how ES:O performs, and that is going to keep me on a “single system experience”. When I build my new Thread Ripper 3rd Gen 48 Core Beast workstation in a few months (hopefully), I’ll consider the VFIO solution or just booting from different drives (what I’ve done in the past). I may also consider just casual gaming, as I’ve spent less and less time playing games and more and more time learning the advanced nuances of Linux and Unix systems, mastering the craft of writing software, and experimenting with systems engineering. However, ES:O scratches an itch that’s been hard to scratch for a long time, so I enjoy it from time to time lol. Once again, thank you all for your feedback and support. I’m curious to know if maybe it was a UEFI quirk, an NTFS hostile takeover, or, maybe, there was an update to the Ubuntu/Nvidia systems within the time of me trying this while dual booting and …

My gaming experience hasn’t bleed too far past CS:GO and a handful of other low spec games. However, I’m constantly hearing how great gaming on Linux is. I’ve even heard many people claim that games on Linux outperform the same game on Windows.

That being said, I’m curious to know what you use? Those of you that successfully play games on Linux operating systems, have great performance, and get a working gaming PC, what are the specs? What resolution and refresh rate are you playing at? What distro and version? What graphics card? What graphics card drivers?

I have attempted five games this morning:

Game crashes. Dump file is binary blob. Not interested in e-mailing devs yet.

Huge lag issues between sound and video, massive screen tearing (this doesn’t happen on any other application), freezing as soon as game starts.

Patch fails, saying out of disk space. Not true.

Huge, huge, frame rate drops. Cinematic plays just fine, but as soon as game starts the game is less than 5fps I’m guessing. I move forward, game freezes, and I’m several places from where I was before. Mid roll the game freezes, resume after I’m standing. Attack a monster and game freezes, wasn’t able to resume after that. 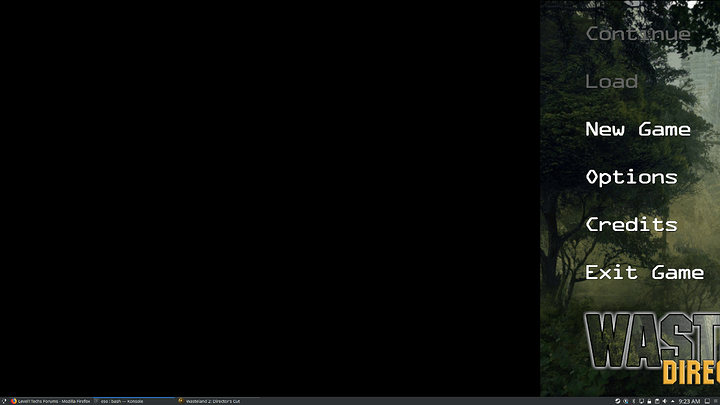 Could not click on any menu items or resize window.

The game started, and once I changed from Windowed to Full Screen it looked great. However, getting into a match provided longer than normal load times, and starting a match (picking Terrorist or Counter Terrorist) and respawning had really bad lag, maybe 2 to 5 seconds.

After respawn and playing the game, though, it was really well. No screen tearing, no input lag, etc. But, did it perform as well as on Windows? No. Certainly didn’t outperform Windows. The longer load times and lag when picking a team and respawning was annoying, but I got used to it, I guess.

I’m curious to know if this is just the symptom of Linux gaming? You get used to the bad performance quirks and after a while don’t notice them as much anymore?

That Linux networking is fire, though lol!

Update: Deus Ex: Human Revolution is unplayable. It loads just fine, but when I start the game there is a long black screen and then a huge, 1 to 2 second lag every five seconds or so. When I quit the game I have to actually run a kill command to get it off the screen.

So, Linux gamers, what do you suggest? I have tried playing on Debian Stretch, Fedora 29, and Ubuntu 18.04. I am using an Nvidia 1080, straight into the motherboard and with an eGPU USB-C connection, and I have the proprietary drivers installed, from 390 to 415.

The buttons are there, you’re just clicking on the image tho. The buttons are properly there. Navigate the menu half blind till you can turn fullscreen off.

Will post properly on my setup in a moment.

No, I tried that too, clicking on phantom buttons. Had to do that for CS:GO.

EDIT: Aaand that frequency number on my CPU is complete bogus, this thing is running on default settings.

NOTE: When I say "no performance issues" it means I didn't have noticeable frame drops or anything, but I didn't monitor FPS or stuff like that actively nor did I run any benchmarks. IF game runs 80 fps on windows and 60 on Linux (with proton), I can live with that.

Worked out of the box. When closing the game it hanged for a moment before desktop appeared, have no idea why it did that. Otherwise the game run well didn’t notice any major performance issues.

Run just fine. Tested the intro mission only. First time when I started the game it took like 2-3mins to start, but after that game started just fine.

Start menu had some weird glitches and graphic artifacts but nothing that caused major problems.

Managed to get game running, but it felt like there was some input lag in controls etc.
Game was playable but wouldn’t go playing competitive. Mouse did have some issues occasionally, like cursor jumping across the screen and what not. Don’t remember if I managed to figure out solutions.

I don’t run competitive/online Windows games on Linux any more since there’s some times news how players get banned for cheating when they are just running games on Wine.

Game run ok, I played intro for a moment, maybe 30min-1hour. Sound was acting up occasionally, had this odd echo or something. Rebooting the game helped. Didn’t notice any frame drops.

These are the game I remember trying, didn’t list any native Linux versions. Can do that too but I believe this is more reporting about Windows versions running on Linux?

Feel free to ask questions if there’s anything I can help with.

Appreciate the feedback. I remember Human Revolution working fairly well on my Debian desktop. Not sure what the issue is now. I thought Ubuntu was the go-to for gaming.

I’m considering trying something else but I might just keep the segregation of duties, so to speak, with gaming on Windows and most of my work on Linux.

If I try something else and run into any issues I’ll let you know. Thanks again!

Wait are you on 4K

Wine may not be able to detect over 1080

Games I play(ed) or tried to play:

It ran for me, but only got 40fps and returned it because that is unacceptable for me.

It ran just fine for me, but that last time I tried it was back when DXVK was brand spanking new

Wine may not be able to detect over 1080

Works On My Machine

gaming on Windows and most of my work on Linux.

This is what I’m going to run for now.

My ubuntu setup for gaming was more or less default, Nvidia drivers where the once ubuntu installed by default, but I don’t remember what driver version it was. My logic there was that’s the setup Proton/DXVK/Wine devs are most likely going to develop and test on.

I remember trying other games too, but they didn’t run or had some game breaking bugs. I just can’t remember what games I tried since I tried Proton gaming well over 6 months ago. And I didn’t bother to start troubleshooting games that don’t work.

The only games that I can run are older ones, they work quite ok on Proton for those that are on Steam. Others I set up with PlayOnLinux manually, usually successfully. The ones I’ve needed to set up manually from the top of my mind: Total War games, KSP(performance is appaling though), Far Cry 1, some others I don’t recall.

I had some issues with POP_OS at the start, and found that Plasma5 works quite well on it, even runs games better.

Maybe one day they will make it official and offer a pre configured plasma5 but for now its only Gnome configured.

I am using an Nvidia 1080, straight into the motherboard and with an eGPU USB-C connection,

I noticed this from your comment… I’m curious are you using a GTX1080 through USB-C on Linux?

Runs great on my system but the laucher is modified. there’s tutorial online onhow to do this, basically a drop in replacement.

The game has a slight issue with audio syncing at the begining screen, main menu. Other than that there is no problem at all with the game. you do have to use Lutris and those instructions to keep Origin up to date but aside from that No problems.

Punkbuster ! I had to run that from Lutrs to avoid being banned. Only did it once
Shadow of Mordor / War (50+hrs ) :

No noticeable problems to report.

I will try Deus X: Mankind Divided and the 9 Assassin Creeds games Theif and Tomb Raider I have and report back.

Could you post some of the issues you are having with the games? Maybe we can help !

Got dat thiccboi system. I’m quite neckbeard on this one.

And yeah, I use arch Linux btw

The memory usage is not really accurate because I’ve got a fuckload of static hugepages and containers running.

Pretty much anything, really. Been enjoying warframe lately, but the grind isn’t something I enjoy sinking too much time into, tbh.

Always find myself going back to Prison Architect, Gnomoria and Factorio.

If dxvk or Linux native works well, I use it. otherwise, I have my windows VM. I need the VM for some other programs so no sense in yeeting it.

I was in the same spot too. I’m considering yeeting the passthrough GPU out of my system since I haven’t used it in so long.

Plus, I use the 1080 ti for tensorflow stuff when at work.